Acts of Appearance by Gauri Gill: a new fictional tale in rural India

Contemporary photographer Gauri Gill has been exploring the relationship between ambiguity and rural life in marginalized communities in India for the past two decades. Her photographs move beyond the media’s demeaning depiction of India’s rural societies, shifting the audiences’ attention away from the superficial identifications that label the regions’ problems of oppression, land, education and health. Instead, her work focuses on creating a new image that empowers the representation of the indigenous communities.

In 2015, Gill began working on her ongoing series, Acts of Appearance, exploring a collaborative partnership with indigenous papier- maché artists in rural Maharashtra to discover a range of masks that transcend their traditional boundaries.

Inspired by the Adivasi indigenous community’s annual celebration of the Bohada festival, the large-scale color portraits present tribal life in fantastical forms, striking a balance between tangible reality and a dreamlike state. The fusion between the masks and the environment in which they exist lay the groundwork for a socially engaging project that allows the collective voices of the indigenous communities to be heard.

Through the act of playing, Gill blurs the line between photographer and subject, unveiling the individual creative expression of the tribal people, bringing forward new perspectives of reality that each become their own fictional tale.

In 2014, while spending time in the rural Maharashtra, India, Gill became acquainted with the yearly festival of Bohada, celebrated by the Adivasi tribal communities in Jawhar. During the month of May, papier- maché artists create masks of characters from Hindu and other tribal myths, to show their gratitude to the Gods and Goddesses.

Around fifty-two masks are made for Bohada, depicting the Indian deities. Each year, a group of people are chosen to be the wearer of the masks and are blessed by a priest to become their character. Throughout the festival, they parade through the villages, enacting mythological tales.

It was the masks and their connection to the rituals of the village that inspired Gill’s project, Acts of Appearance. In an interview with the Guardian, the photographer explained that she began questioning «why what is represented in rituals is often so idealized. Why are there no people with grey hair or big noses? Why is no one wearing spectacles? Why can’t routine gestures, such as sweeping the floor, be enacted too, as opposed to the drama of slaying a demon?»

An Invitation to Play with the Imaginary

From the Kokna and Warli tribes of rural Maharashtra, the artists were traditionally making sacred masks during the ritual performances at the Bohada festival. For these skilled craftsmen, survival and earning a living came as their primary goal. Creative freedom and artistic inventions were hence, unaffordable pleasures.

Gill’s invitation to work on a collaborative project pushed the artists to transcend their traditional craft and realize a new set of representations that would encourage the community to explore the realms of their imagination and build something completely new.

A breakaway from the imagined past and mythological beliefs, the end result was a collection of masks ranging from imitations of animals and humans, to utilitarian objects like computers, mobile phones, television sets and cameras.

A reflection of contemporary reality, the masks embody the indigenous communities’ relationship with the surrounding nature, as the creatures of the landscape take form in their portrayal of birds, rats, snakes, tigers. As well as man made objects that humans have formed an emotional attachment towards, accepting as precious tools of trade. 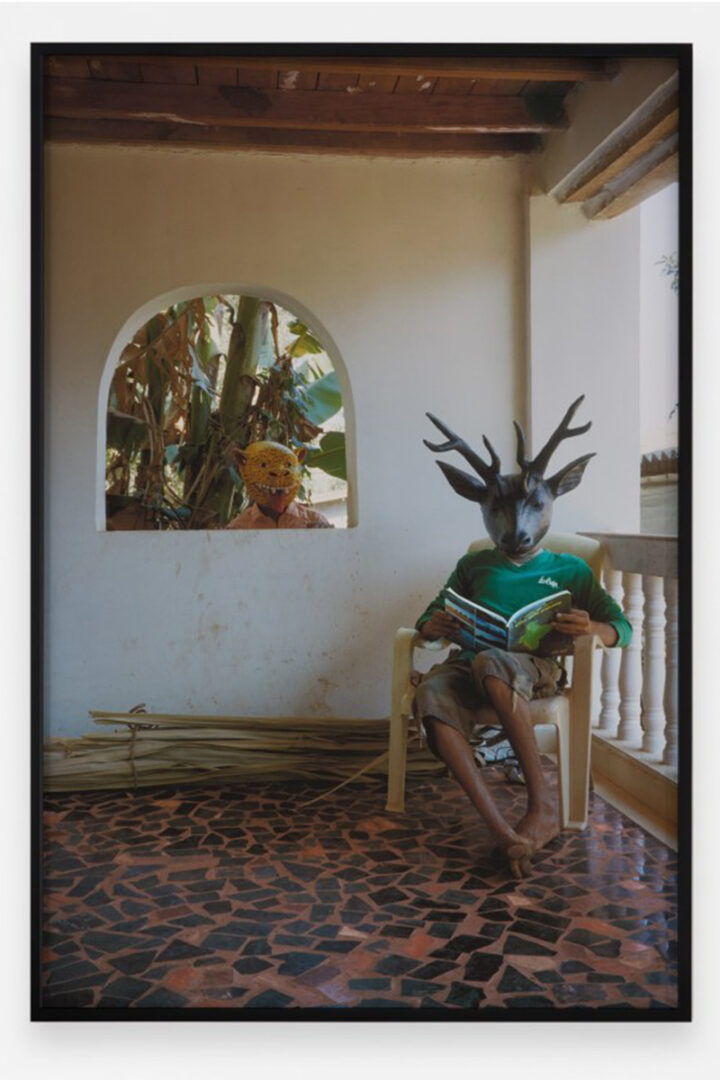 A separation between man and animal, man and God, man and object. In Acts of Appearance, the masks mold the wearer, building hybrid identities that transform once a religious ritual into a secular one. The ordinary stays as the unchanging factor; the subjects are positioned in various parts of the village, photographed as they pursue their everyday chores. The dramaturgical element of the masks, fused with the identities hidden beneath, breed a new fictional story that highlights the relation between identity and role-play.

A rat like creature overlooking a sick woman as she lays in the hospital bed, a horse head sticking out of a vehicle carrying water tanks, a moose like creature reading a magazine while a tiger hides behind a window, a group of animals playing a game of Carrom, the Sun and the Moon taking a walk while gazing up to the sky, a man with the head of a water bottle standing in shallow water.

The Adivasi villagers become Gill’s masked subjects, acting out different scenarios that find their inspiration from everyday rituals. Commonplaces become playgrounds for the imaginary conscious, enacting a mythological tale that floats between reality and otherworldliness.

By infusing theatricality into the everyday life of the indigenous villagers, Gill’s photographs create a new narrative that speaks of collective survival, vulnerability, social behavior and mankind’s connection to nature.

A New Form of Social Documentation

The juxtaposition between the mystical masked creatures and concrete reality, turns Gill’s photographs away from classic documentation and breed a new kind of social documentation that breaks the stereotypical expectations audiences have of indigenous communities. Instead, the imagery exposes the individual expression and imagination of the villagers, independent from their religious and cultural rituals.

By utilizing the masks, Gill inflicts anonymity to her subjects, protecting the villagers’ identities from exploitation that makes a strong point on the ethics of social documentation. Though the images appear frozen in time, the peculiarity of the hidden figures evokes curiosity, leaving the audience to question the gender, age and personality of the characters.

In an interview with Hyperallergic Magazine, Gill explained that «Tribal artists are often expected to perform their culture, rather than having the freedom to explore individual ideas or expressions, be it interiority or abstraction, the way art-school trained artists are. I wanted them to be able to think about their own lives and experiences for a change, to have the space for creative play, and to use the traditions to reflect current realities».

It is apparent that in Gill’s collection of work, there lays a profound concern for the lives of Indian indigenous and minority communities. The Jawhar region, where the Adivasi people live, has one of the highest rates of malnutrition and infant mortality in the country. The region suffers from severe water crises and the quality of living is held to substandard conditions.

Hence, Gill’s initiative to socially engage with the villagers and allow them to create a performative enactment of their everyday life, free the silenced voices of the Adivasi people, granting visibility to the region in the larger spectrum of the art world.

The photographs challenge the viewers, specifically the Western world’s perspectives on what tribal communities look like, pushing the audience to see the imaginative power of deprived communities who have been out of possession of creative pleasures.

Gauri Gill was born in 1970 in Chandigarh, India. She is an Indian contemporary photographer who lives in New Delhi. Her work engages with the Indian identity, addressing caste, class and community as determinants of mobility and social behavior. Working in both black and white and color, her photographs are embedded with empathy, surprise and human concern over issues of survival.