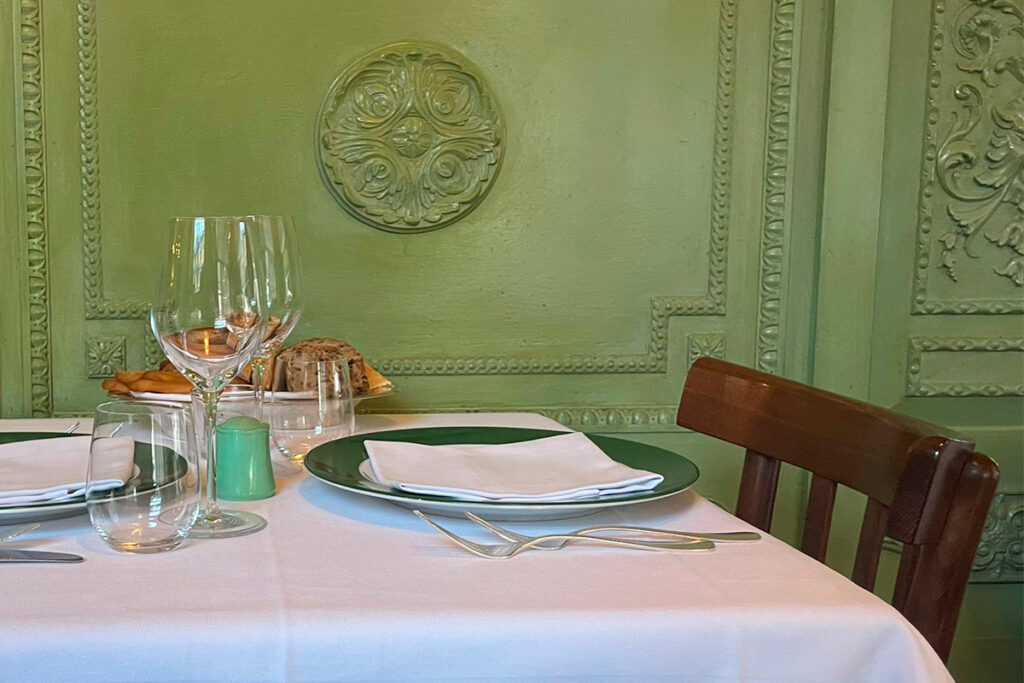 Da Giacomo, Milan. To keep up with the times, from Tuscany to Milano, and back to Tuscany

A place that recalls the atmosphere of the Milanese trattorias of the early Nineties, to discover the dishes of the classical Italian cuisine

Da Giacomo’s founder, Giacomo Bulleri was born in Collodi, Tuscany, in 1925, and left this world in 2019. Cristian Taormina, General Manager of the group – the third generation of Giacomo’s family working in the restaurant – explains that «Da Giacomo was born in 1958 as a trattoria in via Donizetti in Milan. A trattoria with Tuscan origins. The menu was mainly traditional Tuscan dishes, but also from Piedmont. Giacomo, in fact, started working in Turin before setting up his own restaurant in Milan».

Da Giacomo originally served traditional Tuscan food, predominantly meat-based dishes, in the fifties and sixties. Over the years it then evolved into a fish restaurant, when the activity moved in Via Sottocorno in 1989. Cristian attributes this transformation to his parents-in-law response to changes in the market. Da Giacomo then began to expand, opening a Tabaccheria and a Pasticceria. Then, in 2008, it opened the Bistrot. While, in 2010, it launched the Caffè Letterario di Palazzo Reale and the Arengario in Piazza Duomo. In 2018 Da Giacomo went back to its Tuscan roots and opened a restaurant in Pietrasanta.

Cristian describes Da Giacomo’s philosophy as being «obsessive about the quality of our products. We want to keep, not hide the flavors. Buy a good quality product and just make sure you don’t ruin it with too many flights of fancy in the kitchen. This is what we communicate to our chefs, because our clients expect from Da Giacomo traditional, classic cuisine. We need to keep up with the times, without distorting the essence».

Regarding the activity’s current location, Cristian considers it as found by chance. «The architect Renzo Mongiardino told Giacomo he had found a place that he thought was going to be the right place for Da Giacomo. Giacomo told me that when he saw the place in via Sottocorno. He was quite worried at first, because it was not a great neighborhood at the time».

Mongiardino had a certain vision. All Da Giacomo premises have the motives of the arches that reminds of the initial Mongiardino decoration. Then Roberto Peregalli and Laura Sartori Rimini, from Studio Peregalli, created the interior design of other subsequent locations. «So, the original Da Giacomo was born almost by chance in an area where I would have never opened a restaurant. But Giacomo followed Mongiardino, and in the end his choice was rewarded». 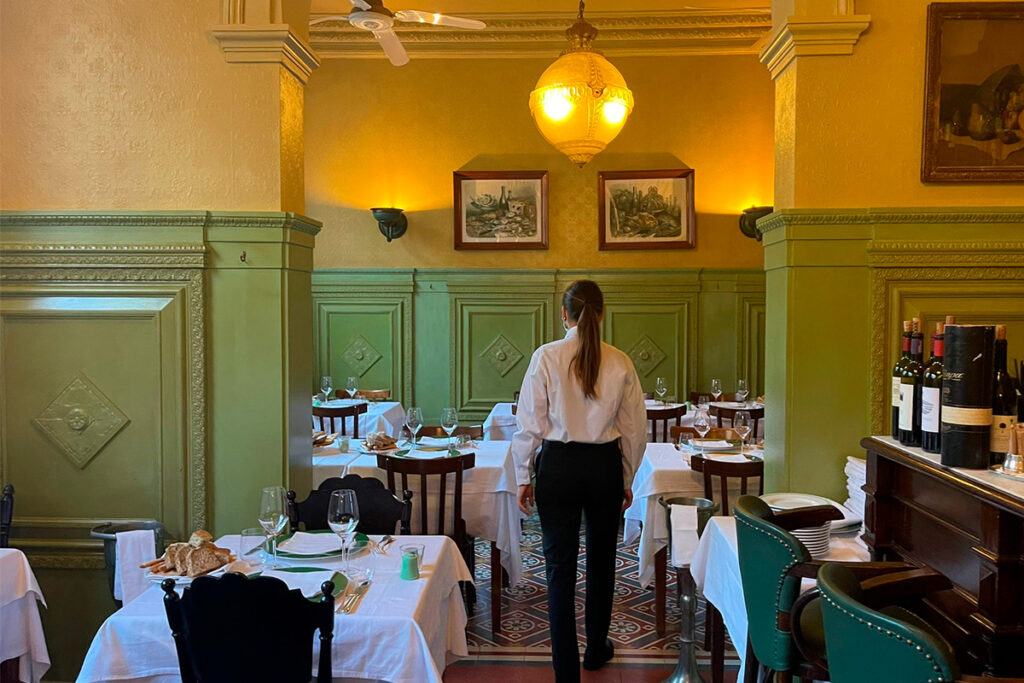 The menu at Da Giacomo changes following the products that are available in different seasons. Although Da Giacomo’s cuisine predominantly revolves around fish, in the autumn they offer truffle and porcini mushroom in their menus. In the last few years, Emanuele Settel has been the Executive Chef, but each location has its own Head Chef.

Taormina states: «We have a good team, with a coherent approach and a clear vision. They have understood what we want from them. But, we leave some freedom to the various head chefs so they can express their creativity and still work within the tradition of Da Giacomo. We have decided to propose some of our signature dishes in every location». For example, the tortello cacio e pepe or the red lobster tartare can be found in all the Da Giacomo restaurants.

At the beginning, Giacomo was renowned as a restaurant that served Tuscan food such as roasts, pappa al pomodoro, ribollita. Even though Da Giacomo transitioned to being a fish restaurant, they have since reintroduced these traditional Tuscan dishes in the Rosticceria, as they represent comfort food. «As far as the ingredients are concerned, as I am from Sicily, I know and I love fish. So, I really enjoy the fact that we have established a long-standing collaboration with fishermen, who sometimes even send us the photographs of their latest catch».

For Cristian, paying attention to small details is instrumental. Especially regarding things that sometimes are overlooked, such as the recipes to make pasta as well as the types of extra virgin olive oil. Small Tuscan producers are the ones sourcing them.

Nowadays, there is huge emphasis on vegan and vegetarian options, as well as on providing locally sourced ingredients. Cristian Taormina affirms that Da Giacomo has always had vegetarian options, and that he has started working on a wine list that includes natural wines. In addition, Da Giacomo also considers requests from vegan clients and from all customers who have allergies and intolerances to various ingredients.

Regarding the type of clients that visit Da Giacomo’s locations, the General Manager affirms that each location has a slightly different clientele ranging from businessmen, lawyers, many people on show biz, doctors, politicians, influencers. The Bistrot is more glamorous, whilst Da Giacomo is more old-fashioned. The Arengario has a more international clientele, while the Rosticceria has a younger one.

During the lockdown period in Italy a Gastronomia in via Previati, near Piazza Amendola, was opened. The location suited their idea of opening a food store. Therefore, when the pandemic hit, in April 2021 they decided to start a takeaway and delivery service. Today it is a neighborhood service, with a selection of cured meats, cheeses and wines.

The year 2020 also signed the start of a partnership between Giacomo Milano group and the Rovati family. The aim was to expand Da Giacomo’s locations, whilst keeping intact both their aesthetic and essential criteria of hospitality. Thus, preserving Da Giacomo’s soul. When asked about the uniqueness of the enterprise, Cristian states that «It is a kind of sober elegance. Da Giacomo doesn’t shout, it focuses on hospitality. This is what it transmitted to us. Both to my parents-in–law and to us, the third generation. Giacomo was from Tuscany, he managed to build a clientele through the years».

A few yearts ago, Da Giacomo did not even have a press office, until a client suggested it. Da Giacomo’s evolution till that moment has been gradual. «We never thought we wanted to get here. Our growth was mainly due to our clients’ support for our work. A work that we carry out with passion, with dedication, to make our customers feel at home».

Now, thanks to the Rovati Family and its investment vehicle FIDIM, new synergies are being created to develop new channels of creativity. FIDIM’s interests in the fields of research, real estate, and hospitality are represented also by the collaboration with Tearose, event and lifestyle production company.

As for Da Giacomo’s multiple other locations, Taormina explains that there has been a certain continuity, as quite a few of them are near the original restaurant via Sottocorno. For example, when they opened the Rosticceria they realized, looking at the competitors, that the area was lacking a good quality rotisserie with a takeaway service. Nobody was offering comfort food in the neighborhood at the time. It was a way of going back to their roots, to a sense of familiar, to home cooking. A place that would put people at ease , with a lower budget, but the same quality.

Still in via Sottocorno, they opened the Pasticceria, as Cristian’s wife attended the Pastry School run by the Italian pastry chef Iginio Massari. They also opened what they define as Da Giacomo’s headquarters, a workspace where preparing homemade pasta, bread and cakes. The Pasticceria cakes are the ones that are served in all the Da Giacomo’s locations.

Regarding their location in Pietrasanta, Tuscany, it was a friend’s recommendation. It was the only location in the center with a garden. As Cristian Taormina explains «we fell in love with it. We chose to follow our hearts but also our heads. Since many families from Milan, Parma, Bergamo and Brescia go on holiday in Versilia, they recognize our brand. The restaurant in Pietrasanta has worked since the year we opened it».

The new partnership: three openings between 2021 and 2022

In the spring of 2021, just before the reopening of the structure, the Grand Hotel Tremezzo – a historical location on the Como Lake – announced its collaboration with the Giacomo Milano Group. Giacomo al Lago reunites the heritage of two families, offering traditional fish recipes to the guests of the hotel.

Two openings characterize instead the summer of 2022.
On one side, Giacomo Milano goes back to its origins, with a new opening in Tuscany, land of origin of the founder. The restaurant is part of Hotel Salviatino, property of the Rovati family, in a Fifteenth Century villa located in the Tuscan hills before the city of Florence. Giacomo al Salviatino focuses once again on the Italian culinary tradition, combined with local products and raw materials.

Finally, Giacomo Milano reached Santa Margherita Ligure. At the entrance of the harbor of the renowned touristic area stands the Bistrot, a format already pioneered in Milan. Comparted to Sottocorno, the Ligurian offer serves fish cuisine, alongside the signature pasta dishes. A novelty is the proposal of “piattini da condivi”ione”, sharing dishes that emphasize the convivial aspect of the Bistrot.

Via Pasquale Sottocorno, 6, 20129 Milano
Da Giacomo. A place that recalls the atmosphere of the Milanese trattorias of the early 1900s, where to discover the dishes of classical Italian cuisine.