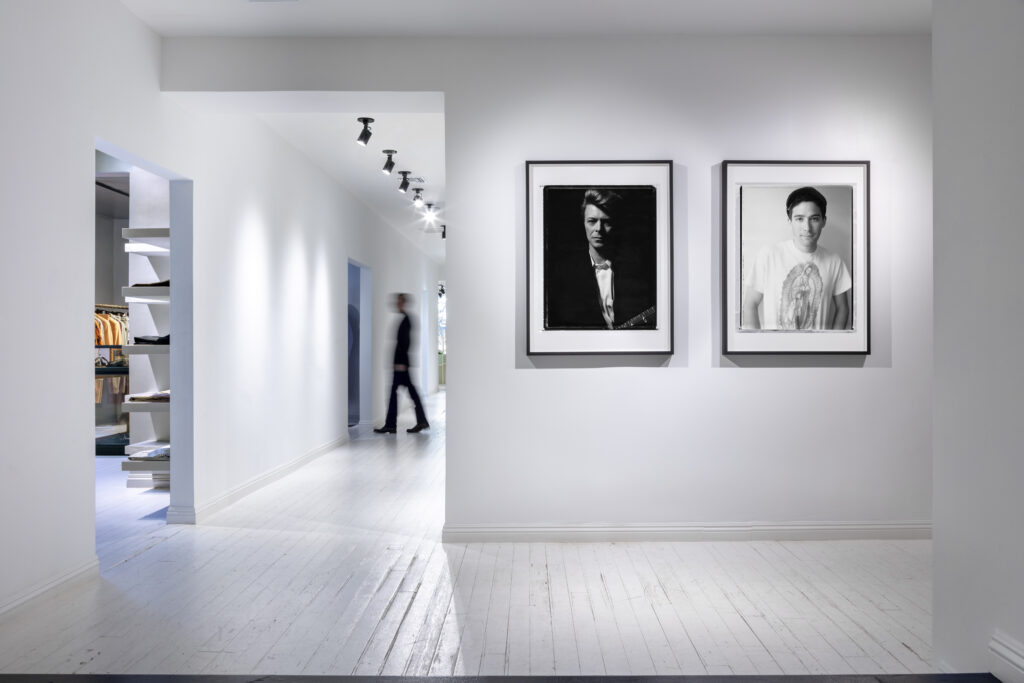 White walls rise from the white floors, and stubborn lights cast over the dreamy space. In this ‘Little House’, Gus Van Sant’s photographs find a home. 15 Portraits is an exhibition organized by the Die Plek Gallery, collaborating with Dries Van Notten. Over a decade after the launch of his portrait collection, 108 Positives, the photographic work of the American movie director resurfaced an intrinsic reach for community.

The dazzling Hollywood glamor blends with the charismatic authenticity of anonymity in a manifestation of humanity. Each gaze, each bone structure, and each skin mark is personal. However, while watching the black and white portraits, the viewer forgets what makes each person different from the other; they intertwine, creating a unit.

Kaat DeJonghe, creator and curator of the Die Plek gallery concept, witnesses how the positives become «a symbol of the whole community that Gus Van Sant has built throughout the years».

Translated as ‘the place’, Die Plek is a personalized space for each art show, a shelter for the creator, and the key for the viewer. In a tailor-made gallery, the location means «to be part of the exhibition, carrying it, accommodating it, or be a weird location that doesn’t go with the work, making people think about it differently».

15 Positives found its place and time when Dries Van Notten opened the first store in The United States, the heart and soul of Hollywood, L.A, a space initially built by Charlie Chaplin as a dance studio. Within the store, the annex titled Little House hosts the work of established and emerging artists and curators such as fashion designer Ann Demeulemeester and Belgian brand Serax. After seeing Kaat De Jonghe’s shows, she confesses the designer «truly understood what I could bring to the space and how I would fill it with something this relevant for the location».

Die Pleck. When art showcasing is about serendipity

In seeking natural habitat for art, Kaat DeJ onghe’s curation style is a refusal of established space and time. The inception of the Die Plek gallery is a result of her pioneering character, longing for the alignment between artist and surroundings. Detached from any geographical location, Die Pleck becomes a platform for artists whose work fits between photography and contemporary art, promoting the idea that creation will find its own time and place.

«I believe what I do is offer a new life and a new perspective of the artists and their work towards the viewer,» says Kaat De Jonghe, aiming to add something to the exhibition spectrum. In her ‘one-man band’, DeJonghe places everything in sync. For the show she exhibited in the CBR Building (Brussels), the starting point was the location hosting shots of the British artist Peter Fraser. The history of the space and architecture are always intriguing, an example being Eva Vermandel’s photographs showcased in Rossaert (Antwerp), a seaman hat shop.

De Plek takes storytelling and the creative itinerant experience to a layer of harmonious union. «Sometimes, I could hear artists complain a little bit that they would have to make shows for a location repeatedly. For example, they would have to show the new work in a gallery they used two years before, making them uninspired by the space anymore. The collectors or the visitors as well, they would come into the same space and think of the previous show they’ve seen comparing, and I think it’s not fair towards the work», explains the curator.

Kaat De Jonghe grew up between the margins of visual development in a chemical film lab. Her grandfather was a photographer with a studio and film lab in Belgium, and her father and aunts shifted towards the film. She later went to study philosophy at the University of Ghent while following an evening photography school. Working for a Belgian daily newspaper, in charge of their archive while transitioning from analog to digital, Kaat still feels compelled by the analog side of visual design.

Visual memory and the image of interrelation. Between analog and digital

Trained as a painter, Gus Van Sant went to ruin the stereotypes of American cinematography, inhibiting the same relish for subversive beauty Dries van Noten has mastered from the incipit of his brand. The exhibition of 15 positives conveys the spirit of transparency, where people find a place in the memory of their photographer. No one is discarded. No one is forgotten. Invincibly unknown or famous, the repeated task of placing actors in the sphere of human beings transforms the practice of the American director.

Kaat De Jonghe extracted the selected polaroids from the 108 Portraits volume and the archives.

The curator chose the pictures, not the people, following the images’ quality. The final number of 14 portraits makes room for a semiotic one left to honor everyone that Gus has photographed, becoming a symbol of the collective character of his community. «Beginning with my movie “Mala Noche”, I took the pictures of the lead actors so that when planning the details of the shoot, I could stare at the pictures and imagine the characters coming to life and how they might visually relate to one another. After we talked about something innocuous and removed from the task at hand, I would generally grab my camera, which was sitting in front of me (I hid behind it, it was so big), and I would ask, “Can I take a picture of you?”» Gus Van Sant recalls.

The visitors can notice one self-portrait in the show, embodying the first picture he took with the polaroid camera in 1975. Gus bought it despite his father being against the investment: «It was so expensive. Gus didn’t even have the money to pay the rent or make films, and then he would go out and buy a camera», the camera that Gus Van Sant used for taking all the casting positives.

With a retrospective over the change of times and our era of recurrent digitalization, the exhibition curator Kaat DeJonghe explains how one of the main features of the 14 polaroids is the extent of their quality which couldn’t exist without a transition. «I’m a very analog person when it comes to photography because going from negative to positive takes time. And you allow the image to evolve, which is something that is lost in the digital workflow», the curator confesses. From this periphery, photography represents time itself. «I think this is a meta in the analog, the time layer. You can’t grasp it. There’s nothing in the picture that is time because the picture is just a 3d object, the print, but you feel time in the positive as an extra layer».

Within 15 Positives, the spectator witnesses the honesty within Gus Van Sant’s portrayal technique. It is direct and effortless. It lacks the posing, the vain manifestation of self. Instead, it stays true to the person. Gus Van Sant suggests that looking back at the images: «They all embody huge potentials for success or failure, for nervousness or calm, sainthood or deviltry, and have individually had their proportionate share of both. The day that I happened to catch them was just one little piece of time connected to all the other pieces of time that make up their lives. And sometimes, I think I can see this in the picture itself. Somehow the camera can capture it». (June 12, 1992, in 108 Portraits).

What visually strikes as poetic rebellion has always been part of the two creatives’ blood and disruptive artistic orientation. Beyond inclusive, they «always saw elderly women part of the show or part of the film, people in the margin being part of the casting». Avoiding stereotypes and aesthetically pleasing imaginaries, both artists have a realistic view of the world and translate it into their work. «I see they have a very gentle way of working. They’re soft in their approach but loud in the result without them screaming or raising their voice or using commercial mediums. The longevity of both of their careers proves that the public responds to what they do», attests the curator.

Another connection comes from their cultivation of honesty without the trace of brutality. Independent, pioneering, and authentic, the two remain timeless in the thirst for boundary-less representation. Black and white, everything and nothing, the 15 Positives exhibition eventually speaks of the artistically social penetration of both creatives.

Gus Green Van Sant Jr. is an American filmmaker, painter, screenwriter, photographer, and musician from Louisville, Kentucky, who is known for directing films such as Good Will Hunting, the 1998 remake of Psycho, Gerry, Elephant, My Own Private Idaho, To Die For, Milk, Last Days, Finding Forrester, Promised Land, Drugstore Cowboy, and Mala Noche.