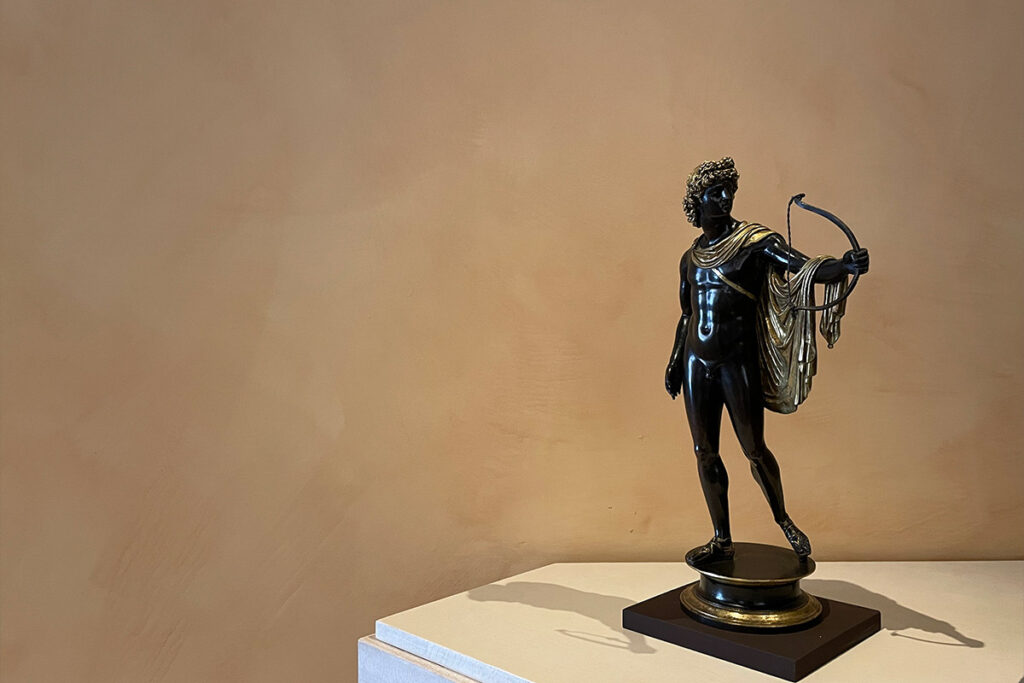 The main purpose of Venetian Heritage is to promote one of the less known aspects of Venetian art: the sculptures. Nobody talks about that, always painters

Venetian Heritage was founded in 1999 by Lawrence D. Lovett. Their mission is to support cultural projects through conservation, exhibitions, publications, conferences, and research. Their aim is to generate awareness of the legacy of the artistic heritage of Venice.

«We adopt our projects when, for instance, an old master painting is in very bad conditions and some museum, church or public institution doesn’t have funds available immediately to restore it. Or, when a national museum needs help to renovate not only the interiors but also to reinvent itself», states Toto Bergamo Rossi, Director of Venetian Heritage

«One of our goals is to promote the existing culture. And, to make the public museums more attractive for everybody, not only for the usual connoisseurs. Fashion houses, such as Dior, have the same goal to transmit high quality handcraft, the knowledge of artisans and handmade products as a hundred of artisans, sculptors, artists, painters, carvers did for centuries in the Serenissima», says Toto Bergamo Rossi.

Twenty-three years of cultural projects and restorations, not only in Venice

The organization also works in the territories that were formerly part of the Serenissima Republic.

Venetian Heritage’s commitment to The State Museum of Palazzo Grimani

Throughout the years, Venetian Heritage produced various exhibitions and publications. This includes the Domus Grimani 1594 – 2019: the classical sculpture collection in the palace after four centuries. Also at Palazzo Grimani, this initiative was complemented by Pittura/Panorama. Paintings by Helen Frankenthaler 1952-1992. This was realized in collaboration with Gagosian and the Helen Frankenthaler Foundation.

«The State Museum of Palazzo Grimani opened in 2009 after decades of renovations but without contents. With the aim to give back life to this Roman Renaissance Palazzo in Venice, we were able to obtain the collection of Roman and Greek statues. They belonged to Giovanni Grimani. We could put them back to their original site after more than four hundred years. It was not only an exhibition project. Over the last three years, we were able to make a general restoration and maintenance of the piano nobile of the palazzo. We could take care of design and installation of the collection of sculptures. At the same time, we proposed to the Italian Ministry of Culture to start a collaboration with one of the leading contemporary art galleries like Gagosian. We wanted to use the second floor, called ‘secondo piano nobile’, of the same building that was usually never open to the public. In 2019 we were able to organize in collaboration with Gagosian and Helen Frankenthaler Foundation the exhibition dedicated to this great American artist of the 20th century. The collaboration continued with a site-specific work made by Georg Baselitz for the portego of the piano nobile. The new exhibition by Mary Weatherford opened last April 2022. Thanks to these different cultural offers, we were able to launch the museum at an international level.

The collaboration with the LVMH group

Over the past ten years, the collaboration between Venetian Heritage and the LVMH group has intensified. Between 2012 and 2013 the non-profit organization restored the gilded silver altarpiece of the Church of San Salvador. This was done with the support of Louis Vuitton. They did so where it had already carried out the first restoration project of the sacristy frescoes in December 1999.

Toto Bergamo Rossi on the role of the fashion industry in the valorization and protection of cultural heritage today. «We have a solid relationship with the LVMH group. First of all, Peter Marino, our president and chairman of VH Inc. (our New York base) is the main architect of the group so we have a kind of privileged relationship with them. Michael Burke of Louis Vuitton and Pietro Beccari of Dior both love Venice and they are always happy to support our initiatives. Fashion and, in this case, high quality fashion industry have the same goal to transmit high quality handcraft, the knowledge of artisans and handmade products as a hundred of artisans, sculptors, artists, painters, carvers did for centuries in the Serenissima. The link is about beauty, transmission and giving access to culture».

Louis Vuitton renewed its commitment with Venice also this year in 2022, organizing a dinner on the second floor of Ca’ d’Oro Museum on the occasion of the opening of the new exhibition during the Biennale, strengthening its commitment and showing the level of care and attention that the brand has towards culture.

The partnership with Dior for the Venetian Heritage Biennale Gala Weekend

Even before he sketched his first designs, Christian Dior had a strong passion for art. In Paris, he was a student at the Paris Institute of Political Science. There, he became interested in avant-garde movements. In 1928, at the age of twenty-three, he managed to convince his parents to open a gallery. In this space, he held exhibitions – which he signed with his partners, Jacques Bonjean and Pierre Colle. In it, they honored, among others, Man Ray, Max Ernst, Pablo Picasso, Joan Miró, Alberto Giacometti, Georges Braque, René Magritte, Leonor Fini and Alexander Calder.

After the Tiepolo Ball at Palazzo Labia in 2019, Venetian Heritage recently organized a charity gala together with the Maison Dior, donor for the Art Biennale 2022, at the eighteenth-century La Fenice Theater. An evening devoted to the renovation of the Galleria Giorgio Franchetti alla Ca’ d’Oro Museum. An iconic edifice, the poetic name of which – Ca’ d’Oro, translates to ‘The Golden House’ – echoes the words of Jean Cocteau. He describes his faithful friend, Christian Dior, as «a nimble genius… whose magic name combines God (dieu) and gold (or)».

Toto Bergamo Rossi states. «Since 1999, we’ve organized the Venetian Heritage Biennale Gala Weekend every two years. The aim is to raise funds for our missions. In 2019, we asked the Italian National Broadcast Company, RAI, to use their own representative office in Venice for our Gala. The office is nothing less than Palazzo Labia, one of the most beautiful Palazzo in Europe. It is famous for being covered by frescoes painted by Giambattista Tiepolo in 1746. Until 1964, it was the summer residence of Don Carlos de Beistegui. He was an eccentric Mexican-French millionaire who restored and decorated the entire Palazzo. In 1951 he hosted The Oriental Ball, what is still called even nowadays Le Bal du siècle (The Ball of the Century). This event was partially orchestrated by Christian Dior who designed some of the guests’ dresses and the performers’ costumes. After an agreement with RAI, we asked Pietro Beccari, President & CEO Christian Dior Couture, to collaborate with us for the creation of an event called The Tiepolo Ball. So, thanks to Dior we were able to recreate the atmosphere of the Ball of 1951 and raised almost 1.000.000,00€. Last April, during the vernissages of Biennale Arte, thanks to Dior we were able to organize another Gala Benefit event at the Fenice Theater. We raised 1.400.000€. The funds raised from the Biennale Gala Weekend 2022 will go towards the general restyling and exhibition update of the Galleria Giorgio Franchetti alla Ca’ d’Oro Museum which belongs to the Italian Ministry of Culture.

«We also designated 100.000,00€ for the emergency of Ukrainian refugees in the mainland of Venice in collaboration with Regione Veneto. Our original plan was to organize an Opera Ball at the Fenice Theater but, due to the war in Ukraine, we opted for a more sober black tie Gala dinner and concert».

The renovation of the Galleria Museo Giorgio Franchetti at the Ca’ d’Oro, one of the most prestigious late Gothic palaces in Venice, appears to be a complex operation that will also require the involvement of specialized craftsmen.

«The Ca’ d’Oro has already been restored and renovated a few times as a museum. The last one was during the 70’s in a very brutalist way, something that seems outdated in the 21st century. So, what we will finance is the restyling and refurbishment of the entire museum and we will also work on the reception area but we must raise more. In Venice we still have artisans and high-quality handcrafts. It will take two years and we hope to be able to inaugurate the next Biennale Gala Weekend in 2024».

Currently, underway at the Ca’ d’Oro, is the exhibition. It was curated by Toto Bergamo Rossi together with Claudia Cremonini, Da Donatello and Alessandro Vittoria, 1450 – 1600. 150 years of sculpture in the Republic of Venice. This exhibition aims to celebrate Venetian sculpture by creating a dialogue between selected works and those already part of the Galleria Franchetti.

«I always wanted to promote one of the less known aspects of the Venetian art: the sculpture. Venice is one of the most sculpted cities in the world but nobody talks about that but always about painters such as Tiziano, Tintoretto, Veronese… Enough, they don’t need to be promoted anymore. The permanent collection of the Ca’ d’Oro hosts some masterpieces of Renaissance: sculptures like the Double Portrait by Tullio Lombardo, the Apollo by Antico and some sculptures in marble by Sansovino and Alessandro Vittoria. We had some masterpieces on loan from some  important museums and private collections. There is also a relief depicting Saint Sebastian that we obtained on loan from the Diocese of Venice and which is displayed next to Andrea Mantegna’s pictorial masterpiece depicting the same subject: a dialogue between sculpture and painting of the early Renaissance. In this specific case, I had the double role of co-curator of the exhibition and fundraiser because the entire production of the exhibition was financed by Venetian Heritage», affirms Toto Bergamo Rossi.

The exhibition at Ca D’oro, avails itself of the collaboration of Marsilio Arte for the organizational part and the coordination of communication. As well as for the publication of the catalog documenting it also through a photographic campaign realized for the occasion. This, in collaboration with Colnaghi and with the support of Banca Ifis, Venice Real Estate Knight Frank and the Swedish Committee for the Safeguard of Venice (Pro Venezia Sweden).

Toto Bergamo Rossi (Venice, 1967) is an architect and restorer specialized in the conservation of stone materials. Since 2010, he has been the director of Venetian Heritage. He is also the author of numerous exhibitions and volumes dedicated to Veneto art.