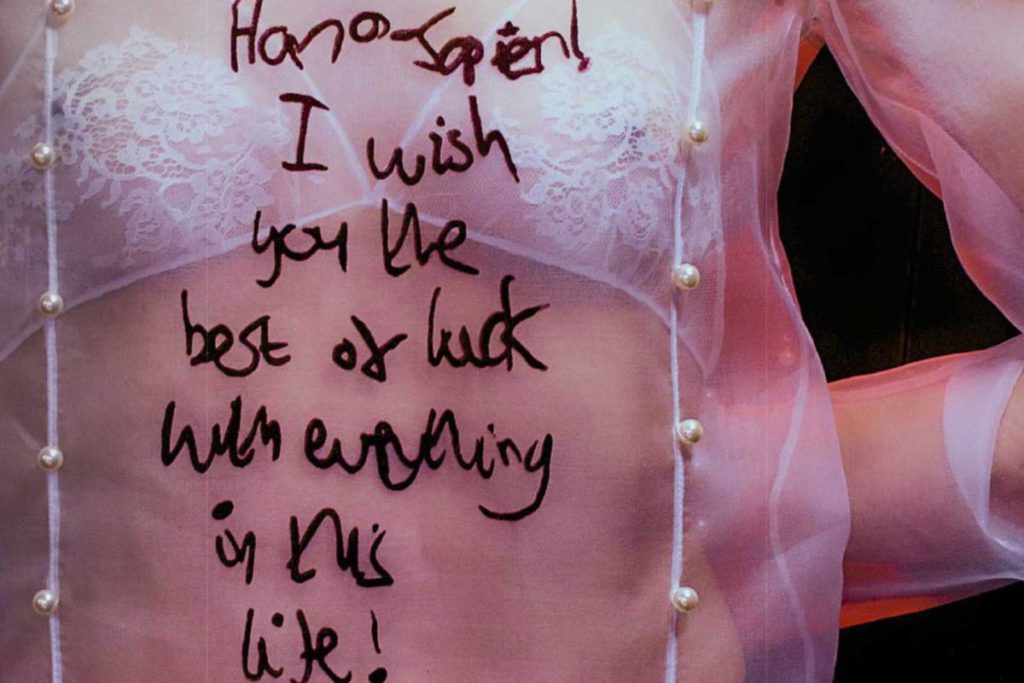 The message by Joshua James Small: a collection of ten looks, opposed to sixty

«I can tell a story about every piece of clothing I’ve ever made or bought» – Joshua James Small discusses the narrative behind his collection, Thru These Tears

Joshua James Small is a London-based womenswear designer, writer and stylist integral to the conversation of sustainable fashion. With an emphasis on hand-craft, Small’s designs have both the theatricality and sartorial sense of haute couture.

Thru These Tears debuted February 2021 as part of London Fashion Week’s online showcase. Presented as a series of immersive images, Joshua James Small’s collection reflects upon the trials and tribulations that have plagued the young designer pre and peri-pandemic. As Small puts it, «from the remnants of sadness, this collection hones in on the strong front we create to push forth».

Small invented a muse that was «despondent» but persevering. Whilst Small’s work makes a viewer nostalgic for the night-out – the collection was photographed in East London’s iconic queer venue The Queen Adelaide – there’s more to the story than this.

The haze of red light, against red and black garments, was inspired by the color field paintings of Mark Rothko, whose work explores universal human emotions of tragedy, ecstasy and doom. Small’s work seeks to utilize the emotive power of the image and transformative power of apparel to «advocate a feeling», just like Rothko’s Black in Deep Red.

How to tell a story through clothes

Though it is not officially classified as haute couture, Small’s work appeals to two key components of the practice – craftsmanship and fantasy. From lace appliqué to hand-embellished Swarovski crystals and pearls, Thru These Tears demonstrates over five hundred hours of hand-craft.

The couture houses of Paris are, for the majority, out of reach, but Small’s work emerges as demi-couture, with much of the skill at a price point closer to ready-to-wear.

Consumers seeking experiences alongside a purchase are increasing, and the winning formula for consumer engagement is storytelling. «You need to be able to craft a narrative», says Small, as he delivers us away from lockdown to the distant reality of the bar, dressing up post-breakup and embodying your favorite music video.

Finding joy in a difficult time

«I can tell a story about every piece of clothing I’ve ever made or bought», says Small. His work, he believes, lends itself to storytelling in two ways – why he made it, and the ability to create a story «through the placement of pieces, or the cut of a garment».

This collection is proof of both Small’s inspirations and intentions. Each piece began as an exploration of textile, as an attempt «to find joy» in a difficult time. When creating textile, Small was not preoccupied with the idea of a cohesive set of looks, and the resulting collection is «an eclectic mix of contrasting textures» true to his tension of emotions. With leather juxtaposed against French Chantilly lace, each look features determined decisions that personify Small’s muse.

The collection’s first look centers around crystal-beaded eye-wear, adorned with pressed flower petals, as though the remnants of tears. Another look consists of a sheer shirt of un-dyed silk organdie, cut back-to-front, embellished with over one hundred and fifty deadstock pearls. It is finished with flocked velvet text that reads ’To my favorite Homosapien! I wish you the best of luck with everything in this life’.

The cut of the shirt plays upon the turn of phrase back-to-front, as a lighthearted way to explain «the feeling of disorder, when you’re not quite whole», in particular when facing a painful reminder of a past relationship. Another look sees a knitted dress recede at the bust, teetering between the desire to be guarded and feeling exposed. Whilst the work is «not a diary entry», the process of making offered Small an escape from routine, and the designer extends this escapism to his viewer.

The necessity of images

Small intended to showcase his work in the form of photography, unfazed by the restrictions of the pandemic that affected many other designers. «I’m driven by images», he says, referring to his extensive magazine collection and folders of references, covering anything from Rothko, to film stills to pop culture. He too relates to not being able to afford luxury goods, and the importance of images is offering everyone access to your designs.

If that wasn’t enough, Small has released a playlist to accompany his collection, to immerse you in his world. Shot by Jade Smith, Thru These Tears is a series of photographs that explores Small’s various references and the tropes of cinema, like Scorsese’s reoccurring red-light, that are often recycled in music videos. «I want to create something that people can escape to, like when you watch a good film, you walk away from it thinking I want to go back to that place».

Small’s collection is exactly that – «cinematic». As a designer, he is «emotionally attached» to every piece he’s labored over and hopes a viewer or wearer accesses this emotional attachment. His manipulation of photography and cinematic qualities, is clever in the context of fashion as it ties to the fantasy world of handmade couture.

At the same time, when films reflect the real world, society is forced to confront its flaws. Thru These Tears is about clothing, and reflective enough of the realities of the fashion industry in which presenting clothes this way should be normalized.

Can fashion be sustainable?

Small maintains that «an intelligent designer can convey the same message and the same intention with a collection of eight to ten looks, opposed to sixty». In fact, Thru These Tears manages to create an experience in just seven looks. This idea, combined with couture techniques, tells a tale of consideration, care and slowing down.

The narrative of handcrafting is implicitly sustainable and, as slow fashion is a pillar of sustainability, perhaps craftsmanship can be said to be indispensable to the future of the fashion industry. Joshua James Small is a pioneer of fashion’s future, well-received in the sustainable community due to his transparency and rare honesty.

«Sustainable fashion is an oxymoron», he states, and he’s not wrong. His outlook considers how much you produce as a brand and demonstrates responsible and realistic approaches for new creators. His seasonless approach rejects the traditional fashion calendar, releasing work when he believes it’s ready, whilst he moves towards circularity in the use of deadstock materials, his work with Ultrafabrics, and involvement in the up-cycling platform Reture.

With the reappearance of the Rita Dress, from his first collection, in a new and «darker» color-way, Small is spring-boarding the conversation for bespoke services. The Rita Dress is a silhouette that «cemented me a serious designer» explains Small, as it attracted clientele such as Rita Ora and Kylie Minogue.

It is one of his more complicated designs, made from eight meters of silk chiffon, two meters of up-cycled deadstock lace, and colored with azo-free dyes. It takes two and a half weeks to make from start to finish. All of his designs are made-to-order, on a custom basis, and «as they’re expensive and take time, these [bespoke] conversations can be had».

Hand-crafted items are more likely to create the positive emotional attachment he craves, promoting extended wear and better care. Combined with storytelling, a consistent brand narrative, and the offer of personalization, Small is likely to have a loyal set of customers. That’s how couture works after all.

Thru These Tears recognizes the relationship of design and human psychology, allowing Small to «reconnect with the joy of creating», whilst tapping into the unconscious nature of clothes as representative of mood. The handmade processes of his garments constitute a human result – clothing that has a personal effect on you.

The heavy focus on couture techniques demonstrates the potential for high-end sustainability, as clothing «doesn’t need to be hemp-based or marketed as eco-friendly» to be made in a responsible way. Small hopes to create «illustrious, elevated and well-made pieces that are rooted in textile» whilst transparent in their sustainable efforts.

Joshua James Small is a designer with a contemporary sense of couture, educating the industry. The sad and sexy muse of Thru These Tears offers a relatable but escapist adventure for women, or anyone, right now. If photographs alone are relief from routine, the experience of wearing the collection is yet to be imagined.

For Small, the opportunity of a showroom would be to «have these conversations about the pieces and the craft», beyond the details of his images and extensive captions. Couture-level craftsmanship is a language of its own, and developing this language, and story, is key to a brand’s success in the current climate. Small suggests that his use of craftsmanship is about inciting conversation, and «if anything is proof, it is this interview» he laughs.

London-based womenswear designer whose eponymous label launched in 2019. He focuses on a sustainable and conscious approach to design, while exploring the techniques of couture.  He has previously worked for Richard Quinn and Gareth Pugh, whilst contributing to SHOWstudio, Vogue Italia, i-D and Lampoon.