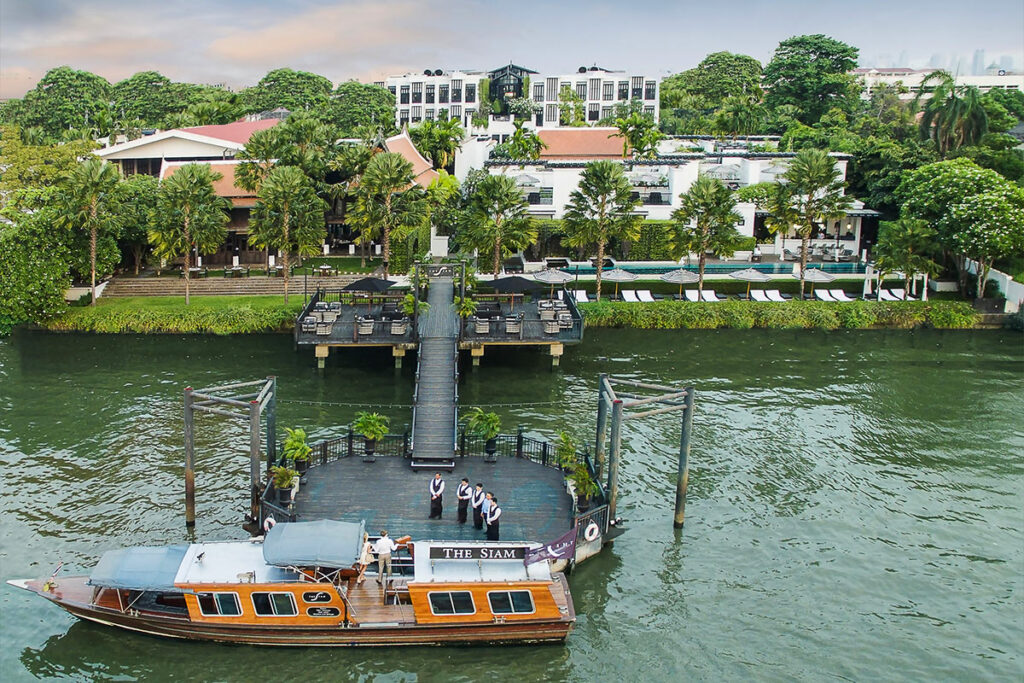 The Siam Hotel in Bangkok

Inheriting land bought in the 1960s from his grandfather, The Siam is the brainchild of Krissada Sukosol built in 2012 along the Chao Phraya River. The hotel is one of five owned by the Sukosol Group, a family-run business that has been in operation since 1939. Having expanded into a myriad of industries throughout the years, Krissada professes that hotellerie is and will be their first passion. The Siam is their first venture towards lavish accommodation and living.

Krissada is no stranger to the arts, hailing from a creative family. For some time, he enjoyed life in the fast lane, distinguishing himself as an actor and singer. It was not until the matriarch of the family persuaded him to be part of the family business did Krissada begin envisioning The Siam Hotel. «My objective was to build something out of the common». Krissada combined his interests in history, antiques, and design to build The Siam Hotel – some twenty-five years after establishing the family’s previous hotel. The entire process devoured five years.

The philosophy of The Siam Hotel is to evoke history

«We wanted to create an experience where our guests could step back into time for a bit with the edge of modern comfort». The Siam Hotel rests in a historical district of Thailand, the Dusit District where it is the political center of the nation. Its immediate neighbors encompass tourist sites like The Grand Palace, backpacker’s favorite Khao San Road, and Chatuchak market. Leveraging on its riverside location, the hotel has visitors cruise by boat to soak in the view of what was once known as the Venice of Asia – Bangkok.

Guests sometimes depart with the impression that the hotel has been in operation for years when, in fact, it has been a decade. This was not a coincidental course of action, but one in which Krissada had a hand in. Found throughout the hotel is Krissada’s antique collection; designed to conjure up a sense of nostalgia in their guests. «If you could have your identity, your uniqueness and create a loyal following, you can survive, and that was my objective when I was building the hotel».

The Siam Hotel’s design is rooted in Thai culture

In the beginning, there was but an uninhabited land that slept for years. Khemvadee Paopanlerd Ouan, the chief architect, breathed life into an architectural structure awash with Thai soul under the supervision of Bill Bensley, a landscape architect. The catalyzer came from a union of the opulent, colonial design of King Rama V’s reign with modern features such as steel and glass. The palpable resemblance is the influence of the Musée d’Orsay, considering that the pair boast a spectacular view of waterways.

During the inception of the hotel, the founder placed a significant value on comfort and space. Krissada’s ambition for the hotel was to resemble a home. When it came time to design the rooms, the same logic was applied. Inside the hotel resides thirty-eight rooms, each of which are suites and pool villas. Black and white are the primary colors casted on the hotel, which Krissada says mirrors the establishment’s identity: «clear-cut and defined». From the boat ride to the interior, the objective is to give its occupants a taste of Thai life and culture, if for a brief period.

«Because Thailand is famed for elephants, food, and beauty queens, the accommodations likewise have a Thai theme». Each room, including the public places, is imbued with Thai-ness. The details that constitute the room vary. Some rooms have Thai potteries, while others are furnished with children’s toys from sixty years ago, and a few display film posters from the 1950s. Krissada handpicked the antiques in each room with the intention of keeping the guests occupied with its history.

Some were selected because of their historical significance, while others were to draw attention to the minor details that make up Thailand. «If I find something fresh, I’ll rotate the antiques, thus it changes time and again, making it feel it’s up to date».

Even the facilities at The Siam Hotel exude Thailand’s allure. The gym has a boxing ring because Thai boxing, or Muay Thai, is a prevalent sport in the country. It comes with champion belts and manuscripts on martial arts and combat sport. The spa, on the other hand, has a tattoo studio. Patrons are invited to get inked using an ancient tattooing method known as Sak Yan, popularized by actress Angelina Jolie. These components depict a crucial element of Thai life which Krissada wanted the guests to have access to.

«We’re not Michelin-starred, but we do serve comfort meals». Guests at The Siam Hotel seldom complete their stay without having dined at the Chon Thai restaurant. They do it in part because they prefer immersing themselves in the Thai culture. Three Thai-style teak wooden houses make up the restaurant surrounded by lush flora.

Chef Blair Mathieson, a New Zealand native who understands the intricacies of Thai cuisine, keeps it simple while providing healthy and organic dishes. When guests leave, they remember the hospitality of The Siam Hotel alongside the antique and delectable cuisine. «The team is without a doubt part of the spirit that makes up The Siam Hotel».

The future of The Siam Hotel

The Siam Hotel will be welcoming a fresh dining experience for its guests. Another restaurant in the vicinity will serve international cuisines in addition to the Thai cuisine. At the same time, Krissada is eager to resume work on building The Siam Hotel in Chiang Mai. «I’ve started collecting ideas to build a distinct identity from the one in Bangkok».

The Siam is a private 39-room resort located in Bangkok’s Royal Dusit district. Set on 3 acres of verdant frontage along the city side of the Chao Phraya river.