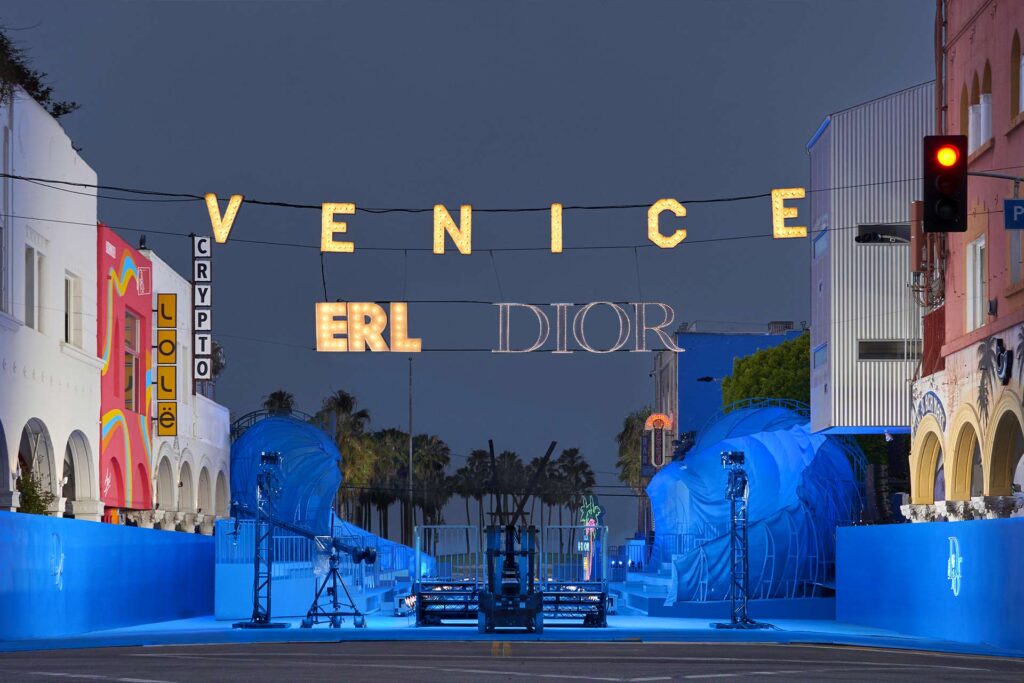 Dior runway in Venice Beach, where all the differences converge

Following Dior’s recent destination show in Seoul, Dior Men chose the States to unveil its Spring 2023 capsule collection. Venice Beach, in particular, has a powerful, evocative image for the artistic director Kim Jones, who grew up in London in the 80s, listening to No Doubt videos, idealizing skateboarding, and then spending part of his adolescence in Los Angeles.

His father worked as a hydrogeologist, which instilled a deep appreciation for different cultures and travel, two things Jones often references in his collection. Having spent his formative years traveling with his family to exotic locations in Africa and the Amazon, the designer returned to London with a cosmopolitan aesthetic the city of angels, home of the hippie movement, the land of Jim Morrison and California surfing, unveiled contrasts and chaos, which directly inspired Kim Jones’ Resort 2023 collection. The designer brought his whole world, closing down the street at Windward and Pacific Avenues, transforming it into an ocean blue runway set.

«The house chose to hold the show in California to celebrate the unbreakable ties that have bonded Christian Dior with the United States since 1947».

The collection, titled ‘California Couture’, overlooked by the historic Venice sign, is a melting pot of all genders and cultural influences.

The collaboration with Eli Russell Linnetz. A dialogue across time, space and generations

As is now a tradition at Dior, Kim Jones worked with a guest designer. The designer is no stranger to collaboration: Kenny Scharf, Kaws, and Ambush have all teamed up with Dior during Jones’ time there. This time it was Eli Russell Linnetz, creative director of Los Angeles-based label ERL, who famously outfitted ASAP Rocky in an upcycled patchwork blanket for 2021 met Gala: «When I was growing up in England, Venice Beach was a fantasy where all the kids were cool, and Eli is one of the cool kids».

His lo-fi imagery is found across the entertainment industry and in his label as an artist, photographer, and stage designer. A Venice Beach native and a graduate both of film school and Kanye West’s creative studio, he balanced art and athletics, sewing costumes for theater while training with the dive team at the University of Southern California.

Eli Russell Linnetz debuted his menswear collection at the Dover Street Market Paris showroom in 2020 thanks to the advice and suggestion of Adrian Joffe, the soul of Comme des Garçons and Dover Street Market, who, on the occasion of the opening of DSM in Los Angeles, convinced him to create his label. Eli references several Dior codes in his collections, such as the Bar Jackets that Jones has brought into his stylistic vocabulary.

The resulting teamwork unveiled a collection that hybridized Jones’ trademark elegance with California skate culture, as seen through the lens of Eli Russell Linnetz.

«We have worked with lots of different people on our collections, but this time I wanted to work with someone differently; I wanted somebody to see Dior from a different angle. With Eli Russell Linnetz, not only do I like his work, but working with a younger designer on Dior Men and seeing things from his perspective, felt incredibly inspiring». What Linnetz appreciated most about the collaboration was the possibility of reflecting on Los Angeles’s idea of chaos. According to the young designer, it can be the fog rolling in and silent or someone screaming outside the window.

What he longs to mirror in the collection is the unexpectedness of the city. The show itself was unexpected with Kim Jones’ control and focus and Linnetz’s chaotic approach to design. The ERL brand founder declared: «There is also a perfection to the chaos. We have generated a clash of moments between historical and contemporary antiquity fragments, all in the name of a conversation between different spaces, times, and generations».

Venice Beach was not just chosen because of its hypnotic place in the cultural canon. California Couture references the time Monsieur Dior spent on the West Coast in April 1957, and the influence America had on the growth of his business.

The dialogue between the two artists, who drew parallels between Paris and California, brought a reimagined version of the House’s classics, highlighting the precision of tailoring instead of the casual sensibility of Los Angeles. In addition, the pair used Linnetz’s date of birth, 1991, as a jumping-off point for the collection: the excavation of the House’s archives landed on the work of Gianfranco Ferré and the maximalist sensibility of the 80’s aesthetic, a coming together of chaos and perfectionism.

«There’s a collision of moments in time and history throughout the collection of cross-generational and spatial meetings in time», expressed Ei Russel Linnetz in the collection notes.

A crew of skaters and surfers with painted hair walked down the catwalk on a remix by Dj Harvey, wearing garments mixed with streetwear and urban wear. The opening look reflected the opulent tailoring of Ferré’s design in a modern version: a padded silk satin suit in Dior’s signature dove gray worn with wide-legged pants and skater sneakers.

Several of ERL’s designs were filtered through a sophisticated lens: slouching mohair knit is paired with tailored trousers, silver-blue shorts hand-embellished with couture beading, and the ERL wave hoodie slung over a shirt and tie. Acid prints sat atop fluid shirts, satin boxers peeking out beneath pink cords, patchwork tartan coats, and the bar jacket reinterpreted with a strong sportswear influence in pastel shades of blue and finally in wedding white for the finale where a model wore a white groom’s suit and an exquisite hat with a veil.

Accessories played a crucial role in the collection. According to Linnetz, the pillbox hats worn backward with beaded veils were a not to Jackie O. At the same time, the iconic Saddle bag is rendered in tinsel and molded gold-metal with a skater-boy chain handle.

41 looks playing on contrasts: 90’s style suit jackets inverted with fabric lining worn on the outside to show a vintage Christian Dior logo pattern, tuxedo pants with crystal-encrusted side paneling, oversized denim pants, and shorts treated with a light stonewashed effect. In addition, pastel shades and brighter tones akin to those used by the young designer reflect the LA sunset. «It’s fascinating to see how Kim works because he approaches everything like a film director», said Eli Russell Linnetz. «We are an example of what can happen when two creative minds from seemingly different ends of the fashion spectrum – and different sides of the world- come together to exchange ideas and find common ground».

In parallel with the physical show, the Maison broadcast from the Horizon Venues platform, allowing owners of Oculus helmets to live a unique experience, both live and in virtual reality, by inviting themselves into an arena surrounded by other people’s avatars.

As Dior House declared in a note, the looks melded the magnetic tones of California with the label’s signature codes. The capsule collection celebrates the House’s heritage and marks its ongoing evolution – as they skate into new and contemporary directions.