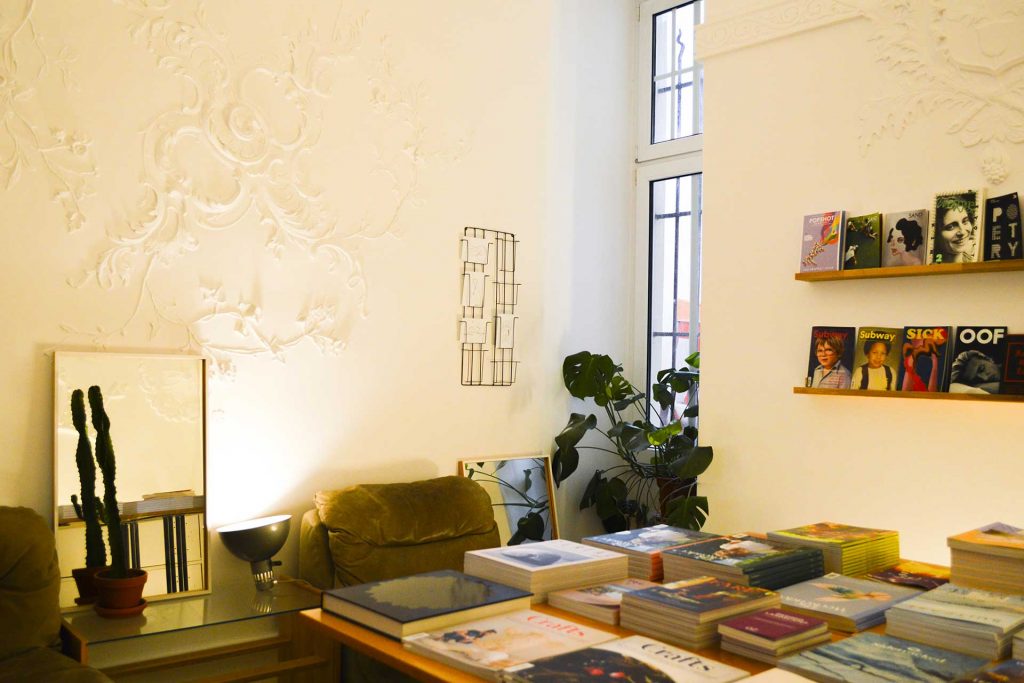 «Why would someone buy a fashion magazine that looks like the others unless it has a defining factor»? Domenico Gutknecht of Rosa Wolf on his fixation with independent-print magazines

Rosa Wolf is a magazine store in Berlin where print takes precedence. Approaching business from a perspective that endears locals, emphasizing one-on-one service sums up Rosa Wolf’s ethos, explains its founder, Domenico Gutknecht. Established in 2017 in the Gleimviertel neighborhood of Berlin, amidst coffee shops and residences, the magazine store has evolved since its inception, allowing the printed titles to dominate the store. In conversation with Gutknecht, he explains how this obsession with print magazines took hold, «I grew up in the South of Germany, in Bavaria. As a teenager, I read pop-culture magazines. One of the first was ‘Blonde’, a German publication. It aligns with what ‘i-D’ and ‘Dazed’ are in the UK. This sparked my interest in magazines. I would go to the airport and train stations in search of them. It was an obsession that grew with time».

On achieving a degree in Media Economics and Journalism from Medienakademie in Berlin, Gutknecht moved to London. During the five years that he lived in the city, he worked as a journalist for a news agency, reporting online for UK and German clients. «That is when I first came to know about magazine shops – they were not present in Germany at that time. I remember that it was ‘Fantastic Man’ and ‘Gentlewoman’ that caught my attention. These encouraged me to dig».

While discussing his growing interest in independent and alternative print magazines, Gutknecht references the store, Art Words, in London as his preference for literary destinations before returning to Berlin in 2015. «When I moved back to Germany, I discovered Do You Read Me?!, which is an institution. Everyone knows it as the place to find magazines and independent-books. Another store that inspired me was Soda Books [which is now closed]. The look and style of these magazine shops are in contrast to what you find in London. In Berlin, there is a gallery style to stores. The magazines are exposed, and people can see what magazines are on offer». These magazine stores would act as a catalyst and incentive for Gutknecht: «one year later, I decided to open Rosa Wolf».

The inception of Rosa Wolf

Being one of the magazine stores in Berlin, Gutknecht strives to differ Rosa Wolf from the others. «Rosa Wolf is not a bookshop, it is not a kiosk to sell magazines, it is not a gallery space. It is a magazine shop. It is a shop that focuses on one element: independent-magazine publishing. What makes Rosa Wolf stand-out is its approach and customer service. I want people to come in and experience a sense of comfort. I want them to browse at ease and to look at the material. People can be put-off by stores like this because they think they are pretentious, or that they do not have a place there». This is a perception Gutknecht vies to change through his in-store presence.

Overseeing and managing the business in every capacity, Gutknecht is the face of Rosa Wolf. «When it began, I had help from my partner at the time. Now, it is a solo project. I have adored the idea of visiting a shop where the owner is ever-present. In Rosa Wolf, I know the customers, they know me. In the online shop, I message customers if they have any queries, and I am responsive if there is any clarification required. I encourage customers to contact me even if I am not in the shop. They can call me or message me on my personal number. I appreciate the idea of having an accessible business, and that is what I want to achieve with Rosa Wolf».

Its ethos remains unaltered since day one, but the vision for Rosa Wolf has changed. When the store broke ground, it was located in the commercial space abreast to where it is today. The function of Rosa Wolf was a coffee shop, and the books were an afterthought: one wall featured a handful of titles for customers to peruse. Over time, the focal point shifted to the magazines. Eighteen months after opening, the cafe ceased operations. The transformation to a magazine store redefined Rosa Wolf. «A contributing factor was the competition with coffee shops in the area. When people would drop into Rosa Wolf, they would have a coffee in-hand, but they were there for the magazines. People started asking for magazines that I didn’t carry, and it became a matter of prioritizing space».

With a minimalist design and a handful of chairs for customers to avail of, the magazines take center stage at Rosa Wolf. At seventy-five square meters, the store offers feature elements barring the moldings on the roof which are inherently German in style. Exposed brick walls serve as the magazines’ backdrop, while display tables and plants present the finishing touches. Gutknecht did not work with an interior designer or architect when renovating the space. Its styling, in fact, was a joint effort between himself and the property landlord, who specializes in roof moldings and restorations. Gutknecht explains that this approach to design has benefitted book launches, exhibitions, and other events in the store.

As for Rosa Wolf’s stock, it comes down to one product: magazines. Gutknecht states that he has considered expanding merchandise, and has considered stocking souvenirs, but German trading laws are a deterrent. «In Germany, the law is that shops are not allowed to open on Sundays. There are a few exceptions to this law: one of them is magazine shops. I am limited in terms of what I can carry in the store». Rosa Wolf, whose name is an amalgamation of his parents’ first names, Anna Rosa and Wolfgang, carries around five-hundred magazine titles. Apart from English – there are French magazines, German, Italian, and Spanish.

When discussing the curatorial process, Gutknecht says, «I have the titles that are known: ‘i-D’, ‘Gentlewoman’, ‘Dazed’. These are the bestsellers which I have in-store at any given time. For obscure titles, the distributor will send me samples to review, or magazine publishers will come to me directly and present their work. Other times, customers will have seen something online and ask me if I can order it in. There are multiple ways of approaching curation, but the selection process is the same. Fashion magazines will come to me and share their work, but it can get repetitive. I ask myself, ‘why would someone buy a fashion magazine that looks like the others unless it has a defining factor?’, customers are likely to buy an established-magazine. That is what it comes down to».

«I appreciate fashion magazines for their photography. One that I would order would be ‘Behind the Blinds’. ‘i-D’ and ‘Dazed’ I bring home, even if I do not read them from cover to cover, I like to collect them. ‘032c’ from Berlin is one of my favorites for its writing and features, design, and photography. When I purchase a magazine, I expect to find content that inspires. When I see a magazine that has poor-writing, I lose interest».

«I do take in limited-editions on occasion. We get people, from Berlin, who come into the store and ask if I can carry their [self-published] magazine. It is not the correct business choice, because limited return can be made of these works. It comes back to the local-vision I have for Rosa Wolf. I do not have to make a profit with every magazine I sell. It is nice to give people a chance to be seen and to share their work sometimes».

Aside from in-store sales, which, pre-pandemic, was the business’ economic driving-force, there are other operations that sustain Rosa Wolf. Its magazine subscription service, in fact, has clients, including hairdressers and creative agencies. Rosa Wolf provides a customized service for subscribers where businesses share their budget, customer demographic, and magazine preferences. From the information supplied, Gutknecht handpicks a selection of magazines and delivers them to their door. Subscription services apart, online sales have spiked during the Coronavirus pandemic. «Covid-19 has changed the way we operate. Last March, when lockdowns started, people in the community were weary, business dropped, and we closed the shop, but online orders increased. This increase in online sales and traffic has not changed throughout the pandemic».

With shipping from online orders, Gutknecht has revised Rosa Wolf’s shipping methods to adopt environmentally-friendly and waste-conscious policies. «I make a point to use no branded or new-parcels for shipping. I reuse ones that have been sent to the store or that I have received personally. I became aware of the waste caused by throwing away usable parcels and boxes. This was when I started to reuse packaging material. I state it on the website, and customers are aware that they will be receiving their delivery in reused packaging. It is a parcel. Therefore, it does not need to look pretty. It is what’s inside that matters. I have had no complaints».

When discussing Rosa Wolf’s customer base, Gutknecht tells us, «The store’s key demographic is varied. In the beginning, I expected to attract people from the arts and those who could afford the magazines. There is an increase in the number of younger-customers who are drawn to the fashion-magazines. The age bracket for customers spans from sixteen to sixty. It’s a rewarding experience when people, who do not look like your magazine store customer, come in and find something. There are regular-customers who will recognize when there is a recently-released issue in-store, and we will discuss it. We will talk about the magazine, the positive aspects and the elements that could be improved. This exchange is a key part of the store for me».

The diversity of customers is a result of Rosa Wolf’s location. A myriad of shops, bars, and restaurants, in fact, surround Rosa Wolf, and it is a neighbor to Mauerpark, which is credited to footfall during the weekends. Further, Rosa Wolf is continuing to grow. «During this lockdown, I realized that business is stabilizing, while other businesses are closed, magazine shops are allowed to remain open. People have time to read, and dough to spend on magazines because they are not traveling and eating out. Before the pandemic, I wanted to open up a second location in another city or in Berlin. The pandemic has made me realize how risky it is to be a business owner. We need to be content with what we have».

Rosa Wolf is is a magazine store in Berlin where print takes precedence.