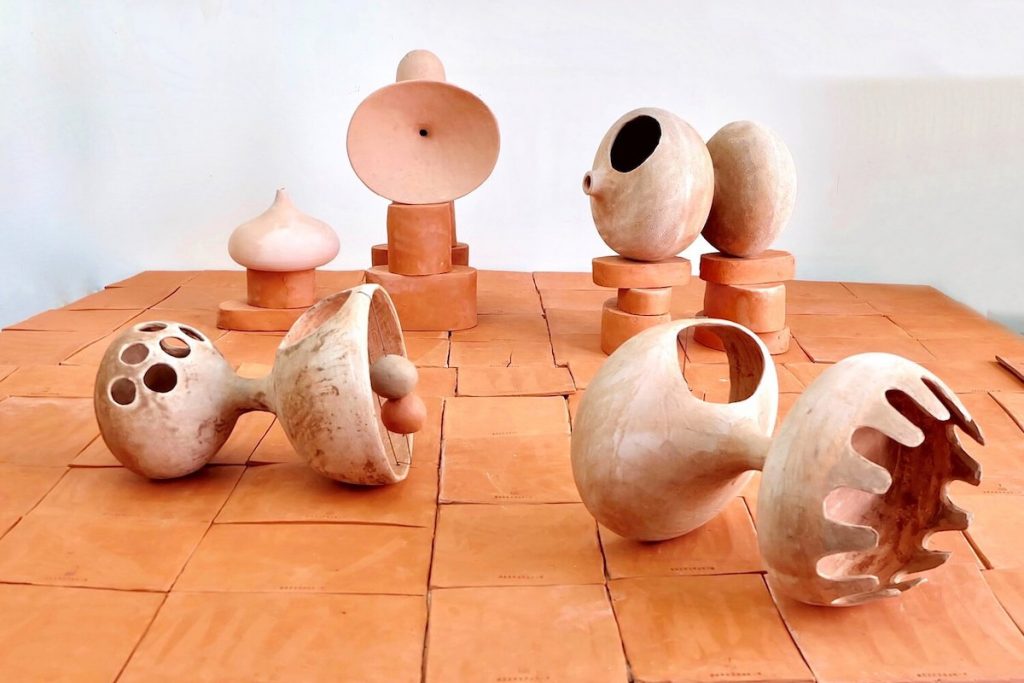 The work of Brooklyn based ceramicist Yuko Nishikwa is guided by the Japanese onomatopoeia ‘pika pika’, calling «a reaction that moves the observer. This industry has quality»

The ceramic technique Jōmon – ‘cord pattern’ – deriving from Sixteenth century, refers to the method of decorating pottery. This pottery form, composed by women utilizing coils of wet clay and shells or mica, was embellished with geometric patterns by pressing cords on the vessels surface before the pots were being fired at a temperature of 900 degrees Celsius. The treatment varied between the regions, preceding a stylistic diversity of pottery ware. After a period of isolation, during which Japanese potters intended to align with international demands of traders, the arrival of the 18th and 19th century was reputed to augur the obliteration of the Japanese pottery craft, as blue and white porcelain from China drew the attention from European tradespeople.

After the wars in the 1900s, the ancient art form regained the interest of people, as they desired the reaffirmation of humanity. Until today, the craft of pottery is being introduced to Japanese children at a young age. Workshops and local courses offer introductory lessons on pottery techniques, relatives pass down their knowledge to the following generations. It is the understanding of the material’s elementality, formed from the earth, shaped with water and hardened by air and fire, awarding the objects with Shintō spirituality.

Raised in a town south of Tokyo, Yuko Nishikawa, Japanese designer and ceramicist, based in Brooklyn, New York was introduced to handcrafting by her family. «My grandmother was doing ceramics when I was six years old, and I visited her ceramic workshops in Japan. For many Japanese kids’, pottery is a common practice, as there are various classes they can attend. It can be compared with other children taking a piano lesson. In this case, they learn how to work with clay». The Japanese cultural belief system Shintō, introduced in the 6th century, can be observed in the social life of the Japanese people, their values, philosophies and motivations. Nishikawa says: «Every object has a ‘god’ or spirit. It is a different concept of ‘God’ than the one of the Western world. When I create an object with my hands I want to make it look like it has its own spirit. It should look alive and smiling».

At the age of eighteen, Nishikawa emigrated to the States, which she has not left since. She took a degree in Interior Design at the Fashion Institute of Technology and pursued a career as interior designer for leading NYC design companies such as Alexandra Champalimaud or Bilhuber. After one decade of working full-time as a furniture designer, Nishikawa could not align her visions with the aesthetic of the companies, being about luxury and cleanness. «The realization that I was thriving for an aesthetic showing the authenticity of handcraft, wobbles and natural movements which cannot be recreated in a computer program, triggered my wish to work with my hands again». Intrigued by having direct contact with the material and sharing with her hands, made her reencounter the matter clay. «I experimented with materials. I took glassblowing classes, I painted or did metal works. Ceramic was one of the materials I wanted to work with». Intending to practice the clay throwing technique on the reel, Nishikawa rented a communal space, which she visited in the mornings before commencing her full-time position. In 2014, a coincidence brought her together with Calvin Klein Home and resulted in a collaborative ceramic decoration collection. She continued to market her wares, presenting her collections to cafés, restaurants, on tradeshows and Instagram. In 2017, Nishikawa entered a sabbatical year and resigned from her full-time position to transform her ceramic projects into a business.

The belief in the potential of ceramic, its «simplicity and depth», induced Yuko Nishikawa to establish her company. «The longing to throw on a reel originated from my childhood. My grandmother prohibited me from touching the reel yet I was convinced that it would be a skill I needed to acquire in my lifetime». Perfecting her throwing skills, she decided to hand-build sculptural forms, which led her to design lamps – the main focus of her business today.

In December 2018, Nishikawa introduced her lightning piece – a twenty-four ceramic shell chandelier – at the non-profit exhibition studio In Good Company in Brooklyn, founded by Fernando Mastrangelo. In 2019, she worked on a selection of solo shows, exhibiting her works such as You See a Sheep across Galleries in New York.

«It is not like a rain of inspiration pouring down from the sky but rather a process of collecting things and choosing what to work with next». For the ceramic project Time Vessels from 2017, the artist sourced her inspiration from Time Travel by James Gleick. His perception that every human retains the ability to travel through time by memorizing and remembering events from the past, or thinking about future actions, impelled Nishikawa to design ceramic sculptures: pastel colors and forms inspired by what human’s hold inside – organs – served as a representation of our time travel tools.

«The Japanese language holds a lot of onomatopoeias, which cannot be translated into English. Two words are describing a type of shininess. ‘Nuro nuro’ means a slimy, shiny appearance, while ‘pika pika’ describes a reflection and sparkling shininess. When I design an object, I would ask myself, ‘Do I want it to be nuro nuro or pika pika?‘».

The Japanese expression pika pika influences the decision processes. «It is the tickle one might feel when standing in front of my work. A reaction that moves something within the observer».

Despite seeing her work as her life responsibility, Nishikawa finds challenges in defining and describing her work. Together with her boyfriend, who is a ceramicist himself, she founded the collective Salon at Forest, enabling creatives from New York to come together to exchange philosophies and motivations. The series has had over fifty presenters from disciplines including ceramics, glass, painting, sculptures, poetry, neuroscience, taxidermy, live-action role-playing, textiles, dance, film, and set design and welcomes everyone interested.

Due to the influx of Covid-19, the project had to close its doors. The strategy to utilize social media to sustain interaction with her followers resulted in solo and collaborative projects. «In March and April all my plans, events and orders got cancelled. As I could not leave my flat, I decided to create from within my four walls. For one hundred days, I painted one painting a day and uploaded it to my Instagram. What originated from the intention to enlighten people’s days, evolved into a success. Almost all of the paintings were sold».

The livestream together with the fashion House Sandro Paris during the lockdown led her to design the window displays for the brands ‘holiday’ season. «It started with an acrylic paint I made for their holiday store cards. They asked if I would be interested in doing the window displays as well and I agreed». For the displays, Yuko Nishikawa constructed mobiles from recycled papers, taking the colors and shapes of the painting as a guideline. The incorporation of recycled elements, each with a distinct weight, texture, or look, should give movement to the mobiles. «The sculpture should feel like a three-dimensional experience of the painting. I intended to give it physical movement and an appearance, tickling joy and a feeling of comfort out of the observer».

The longevity of pottery

The aspect of sustainability triggers Yuko Nishikawa. «I worked on this sustainable project for Sandro and I myself try to give my work the thought of consciousness and sustainability. Making pottery and ceramics is a process for which one needs high volumes of energy. My designs captivate through longevity, and they can be unassembled if something needs to be repaired. This industry has quality, timelessness and the appreciation for craft at its core».

The affiliation of Japan and the ancient artform of ceramics emanates from their history, dating back into the 1500-1600s, and Japan’s Neolithic period. Ceramics carried people’s belief systems, cultural values and pictures of wars and dynasties.

Studied Interior Design at the Fashion Institute of Technology New York.
She is based in Brooklyn and specialized in fantastical installations, whimsical lighting, and collectible objet d’art