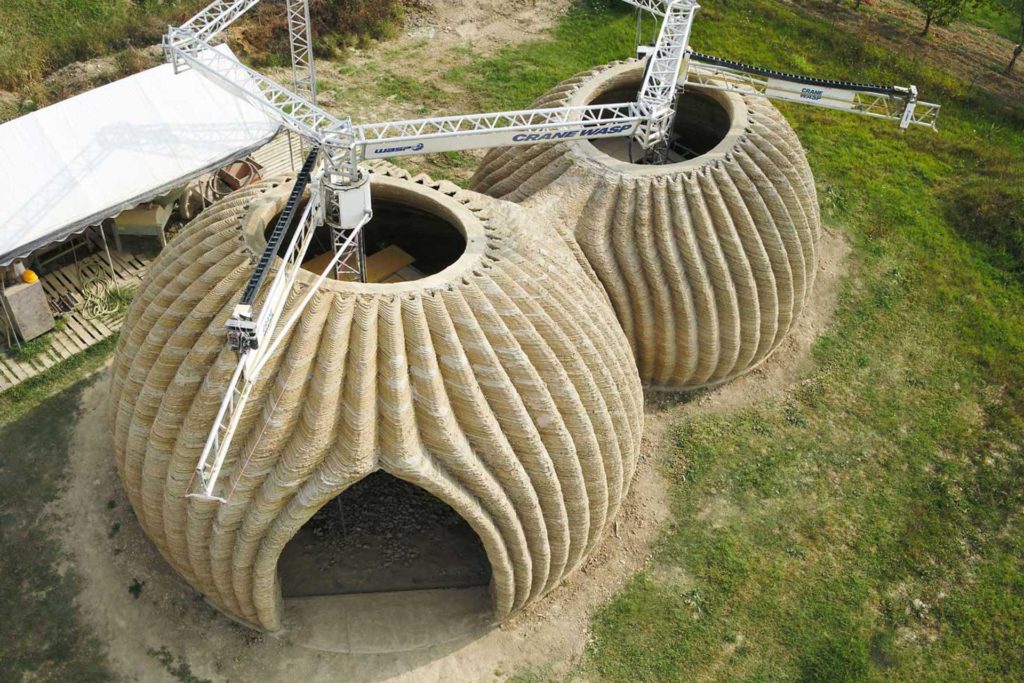 «The first project of a house that can adapt to different climates». Architect Mario Cucinella, talking about TECLA, a collaboration with Wasp 3D printing

Nations all over the world are becoming urbanized; people are moving from the countryside and rural spaces to live in cities. There is the urge to find a solution to decrease the carbon footprint of the construction business, while ensuring all human beings a right to housing. To solve this issue, Italian 3D printer company Wasp partnered up with Mario Cucinella Architects studio. Thanks to the combination between state-of-art technology offered by Wasp and designs by Architect Cucinella, they created a way to print houses in 3D using clay as a raw material. The project is called TECLA, which is the literal amalgamation of ‘technology’ and ‘clay’.

«The point» explains Cucinella, «is creating buildings in the oldest material on earth with a technology that we have available for the first time». These buildings would allow constructions using locally sourced raw materials, thus avoiding transportation. «The only equipment you ship to the construction site is a simple machine that fits in one container. Then you work with what local raw materials». Using soil is also a sustainable choice by itself. There is no need to refine, merge it or melt it in a factory. TECLA houses and their construction are solar-powered; thus saving energy or avoiding having to channel it when working in areas where a power grid is not available.

The construction starts from an analysis of the material

First, you have to dig the ground to find clay, which is around a meter deep. Once clay is extracted it has to be left to dry. «Clay is sticky», explains Massimo Moretti, CEO of Wasp, «if you leave it in its fluid form it gets stuck everywhere». Dried clay is then broken up in pieces and separated from rocks and other undesired materials. To understand how to separate the rocks, Wasp underwent months of research and development.

They found a way of doing that by applying a technology that is used in recycling centers. «as far as I’m aware we are the only ones who do it like this», comments Moretti. After this process is completed, a test is run on the soil to find out how much clay, slit and inert it contains. In order for the construction to be effective, there are proportions that must be fulfilled. «what we are looking for is thirty-thirty-thirty». In case the proportions are not present, the material is recombined to achieve the right balance. Natural fibers are then added.

For TECLA rice fibers have been used, because they can resist living inside water without degrading. The blend is then mixed together with a millstone. A machine «that is at least ten thousand years old but has not been surpassed yet, both in terms of efficiency and energy saving». The material thus obtained «is pushed into construction pumps that we have designed and built specifically for this project». Similar pumps are used for concrete in traditional construction. But Wasp had to completely rethink them to make them suitable for injecting clay. An appositely designed extruder does the material that is poured from a high-precision crane. «It is a tool with millennia of history, and we decided to stick to tradition. We automated a crane to obtain a machine that can deposit material responding to a computer with a millimetric precision».

So far Wasp has built two cranes that operate at the same time. They are connected to the same operating system, but Moretti explains that «they could potentially be ten, using the same algorithm». Wasp and Cucinella also took care of the design of the construction site. They imagined it as a hexagon that they have called ‘crane wasp’: «our machines are hexagons that can be positioned in any direction depending on how you assemble them».

All that is needed to build a house are the 3D printers – which can fit a container – sixty cubic meters of soil, or a similar raw material according to the area. Two hundred hours of work, seven thousand computer codes, and six kilowatts of energy. The walls are made out of three hundred and fifty layers, each twelve millimeters thick.  The circularity of the system is guaranteed. Once a house is dismissed it can be melted and just become soil once again. Once the building phase has been finalized, there is a drying period that must be awaited in order for the houses to solidify and become resistant to the elements.

How to make the TECLA project scalable

This is one of the main issues that have to be tackled to make the TECLA project scalable. If houses are to be built with this system all over the world; the different climate conditions of each place must be taken into account during the design phase. In order to determine building timings so that they can allow for a dry season to pass after the construction so that the houses can set. A house in the Sahara will have to be built at a different time of the year than one in a tropical climate.

«This house in itself is just a starting point to show that we can build a house in clay with 3D printers». This must not be a limit: «different models can be developed» each based on a specific climate. «What must be remembered», according to Cucinella, «is that a machine does what you tell it to do». He goes on saying that «this is not just the first 3D-printed house. It is the first project of a house that can adapt to different climates and that is the real challenge».

TECLA: to design a house that could adapt to different climates

The point was not to construct «another Fordist machine». But to create a way of building that could become adjustable rather than replicable. The only criterion to measure sustainability does not have to be the material used. More aspects have to be taken into account.

«The project didn’t have to be sustainable just because of the material, which is soli, that you can find anywhere. The goal was to design a house that could adapt to different climates; knowing that the printer is a machine that has the amount of intelligence that we put into it. There’s no need for the printer to print the same things everywhere. The printer has to follow a different code that we enter that tells it to adapt the characteristics of the work to the climate it is working in».

It is all about using «new tools combined with ancient material to create new forms». The creation and specificity of the design is at the core of the idea. «in the digital age you can have a machine that is always the same but always does different things».

A research phase has to be carried out when approaching each new project. The materials at disposal have to be studied and analyzed and the form of the buildings has to vary accordingly. «the design has to be made according to where and with what material you are going to build». In other words, it is the project that has to be based on the raw material you have at disposal, not the other way around. The idea is to forget a pre-existing shape.

Even though at first sight the houses look different that the public expects them to; the design is made based on the law of whatever works best. «Here at Wasp we have a mantra» says Moretti, «and that is what it is, the way it is». It is the raw material that speaks, and it has to have the first and last word about the look of the building. «If the shape of the design is what works best, even though it can be far from what people expect a house to look like, that is the way it’s going to be built. Once you understand the best way to arrange that material so that buildings can be solid and can stand, that is the shape you are going to give it, regardless of people’s expectations».

Exporting knowledge rather than materials

Some critics have argued that buildings in soil will melt down or fail to resist climate conditions. To these critiques, Cucinella responds noting that «in India, Pakistan or Iran, you have Royal palaces built with soil or clay, they are 1,500 years old and they are still standing. They are probably more durable than concrete and steel». If trials have marked a success so far, it is also true that «the challenges are all ahead: the world we have lived in is dying, our cities are dead; the challenges now concern the countries that are growing and will need new cities». It is for this reason that inventing a scalable and exportable model to build the cities of the future while stopping the shipment of construction materials has been identified as a target goal: «we have to start exporting knowledge rather than materials».

The aim is to provide poorer areas of the world with the knowledge and technology to build houses with materials that are already available on the territory. This idea of knowledge is key. New skills are required in young architects and engineers, in particular the ability to think in a way nobody has ever thought before and work on projects that the world has never seen.

In this context, it is essential for universities and other training-providing institutions to adjust. The next generations of professionals will have to tackle climate change and find a way to guarantee a right to housing to everybody on the planet with respect to nature and the environment. «Constructing can never be an ecological operation» admits Cucinella. «No such thing as ecological building exists and the idea of a carbon-zero building is a fairytale of our times» but with TECLA «we are getting closer to that concept».

An Italian company leader in the production of 3D printers worldwide. Their projects are developed on the themes of housing, Art and culture, Energy, Digital fabrication, Health and food.

The core values are creativity and sustainability. They are based in Bologna and New York and have an international team of more than ninety people. The study was founded in Paris in 1992.