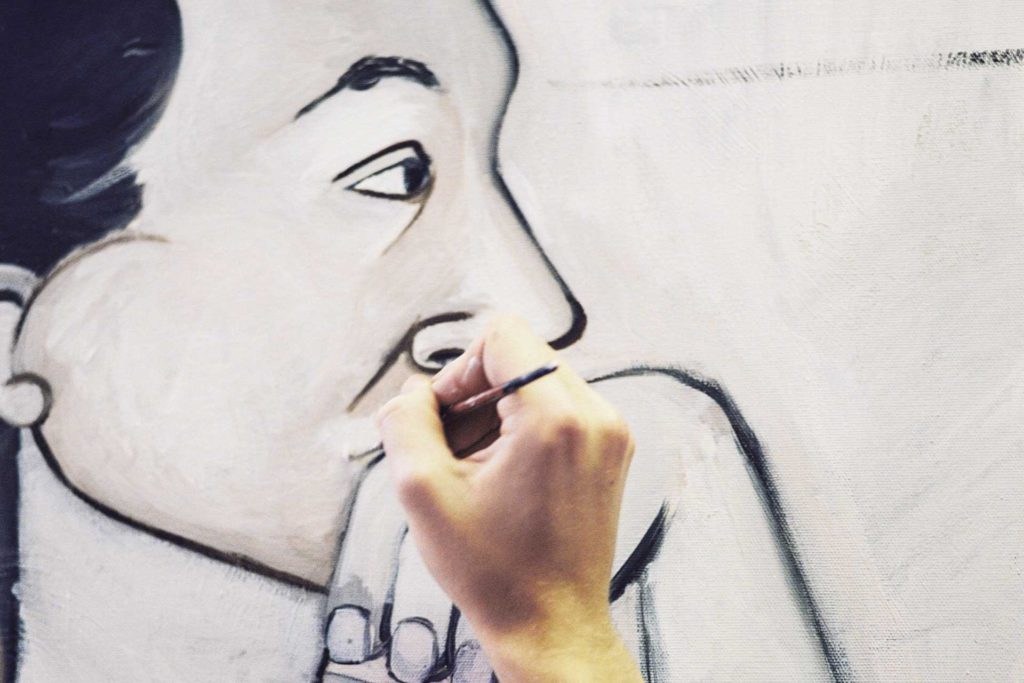 Forget the shock: pastel colors by Sébastien Notre – an inner urge that it’s not traumatizing

«My art is not meant to shock people». Soft is often read as a synonym for weak. Pastel colors allow the artist to show the contrast between strong images and soft colors

Sébastien Notre uses paint, sculpture and collage to express himself and share his vision. His subjects in pastel colors transmit jovial feelings, depicted as they were inhabitants of a romantic reality; yet something in his portraits lead to an abrupt, almost disturbing, perception.

The viewer is brought back to a terrestrial ground, to his most human traits. Even behind his most lighthearted works is his research on visual sources, his planning and his self-analysis. During the summer the artist took time to reflect how to express the most valuable ideas that came to his mind. From here he planned his projects in what he calls ‘chapters’, rather than thinking of his works as a series. In this stadium he thinks about what medium he prefers to express himself with.

All his subjects don’t come from the real world but come from his will to tell a story. The artist often looks back to his past four years’ works in a critical way, questioning if he still recognizes himself in them. In this way he looks for a way to give them a new meaning that would make sense for who he is today. He never refuses his works but tries to reenact them in the present, questioning what he would like to create in the future.

The young French artist currently lives in Milan. A city that he didn’t love at first sight but learned to appreciate over time. After moving to London to study fashion at Central Saint Martins College of Art and Design, he soon realized he was not fitting in.

What he wanted to create was something material yet instinctive, that instead of coming from specific technical skills from the design field, was the result of his urge to create something of his own. This is why 4 years ago, after going back to France, one day he decided he wanted to move to another country and chose Italy and in particular Milan as his new hometown.

He visited the city during a vacation and his first impressions were not positive; after a few years he started to realize that «even if it’s not the most energetic city, it’s small sized and, in some way, it’s more human than other European cities such as Paris».

Difference between collage and sculpture

If collage is used by Sébastien for commercial purposes and sculpture for fun, painting is his main field of study, as he is «trying to keep things separate in order to create my own world».

For the sculpture series Buy me a dog (2019) he created forty dogs with pierced ears presented in a friend’s apartment in via Palermo in Milan. The artist explains that at that time he was obsessed with dogs and all he wanted to do was to have fun and create something with clay and acrylic paint.

«It was a way to say I can’t have a real dog so I’m going to create it my own», which in a way was anticipating his real dog’s arrival in his life. The artist uses sculpture to make quick and easy things, but he is willing to do bigger and more complex things in the future, with materials such as bronze and ceramic.

The collage is a technique he learned in school and that, since the first lockdown, he now uses to create mood boards for Luxury brands clients such as Maison La Bougie, Fauvette Paris, Et Dooz NYC, and Vhernier in Milan’s Montenapoleone boutique. Although collage is not his main media, the artist recognizes it allows him to be linked to the fashion world, «as a collaborator and not as an actor».

He starts from researching images from Tumblr and other websites, following the brand’s visual guidelines. In this way the final collage represents an opportunity for companies to visually present their products until they will be able to work again with more complex shootings with stylists, photographers and the rest of the team.

How to use pastel colors

Of all, painting is the media he feels more comfortable working with at the moment. His subjects come from reality, never from the imaginary. He does research and looks for portraits, lamps and other objects that he then prints and works on, re-elaborating them in his own way.

Pastel colors are dominant: «It’s a taste. I used to be obsessed with pink, now I am into pastel colors». Technically, he doesn’t mix colors but uses them directly on the canvas. Secondly, he adds white to make undertones. «The good and bad thing about pastel colors is that they allow you to depict anything that will never look aggressive. On the other hand, I used to worry it wouldn’t be strong enough».

Over the years he realized it’s the trait that makes him recognizable. If a sexual tension is recognizable in his portraits and couple representations, the artist soon explains that his aim is not to shock people: «I don’t want things to be exaggerated. To have sex is like to eat, swim, it doesn’t have be exceptional or to scandalize people».
Even in this case the artist undertakes researches on Seventies erotic magazines he finds online, his aesthetic starting point. In his words: «we are living in a quite aggressive world, yet I am not interested in adding violence. These colors help me to relax. The contrast between strong images and soft colors».

One of his last collaborations is the book Notre by the young artist Morgana De Santis. The photographer followed Sébastien in his everyday life, from his home to his studio. The pictures were conceived from the beginning to be transformed into a material book.

The title explains how the project became ‘Ours’, from the french ‘nôtre’, playing with the artist’s surname, which transformed from a formal collaboration into a common path, discovering a strong bond and a newborn friendship. What the photographer was able to do was to disappear in the studio, never disturbing the artist during his creative process but rather pushing him to work in a stimulating environment.

The physicality of the book was what the artist was attired to, «something that Morgana kept in mind during the entire process», the artist explains, as she was «shooting pictures that she knew she was going to print and that were going to be physical objects to be seen on paper».

In the future the artist is thinking about leaving Milan for some months for a more peaceful place. A place where he can work with embroideries, wood or any other material that could be transformed into an object, with the collaboration of other experts such as wood workers, recalling his aptitude towards the material process of creation, that he always keeps in mind since the conception of the ‘chapters’ of his visual novel.

Sébastien Notre is a fresh visual artist currently living in Milan working with painting, sculpture and collage. In 2018 he started his first solo and group exhibitions in Milan at The cloister (April 2018); Otto zoo gallery (June 2018). He is the winner of the third YICCA’s art prize. Among his latest collaborations in 2020 he participated in the Noli me Tangere exhibition at Studio Rospigliosi. From an idea of Olimpia Rospigliosi curated by Bohdan Stupak.