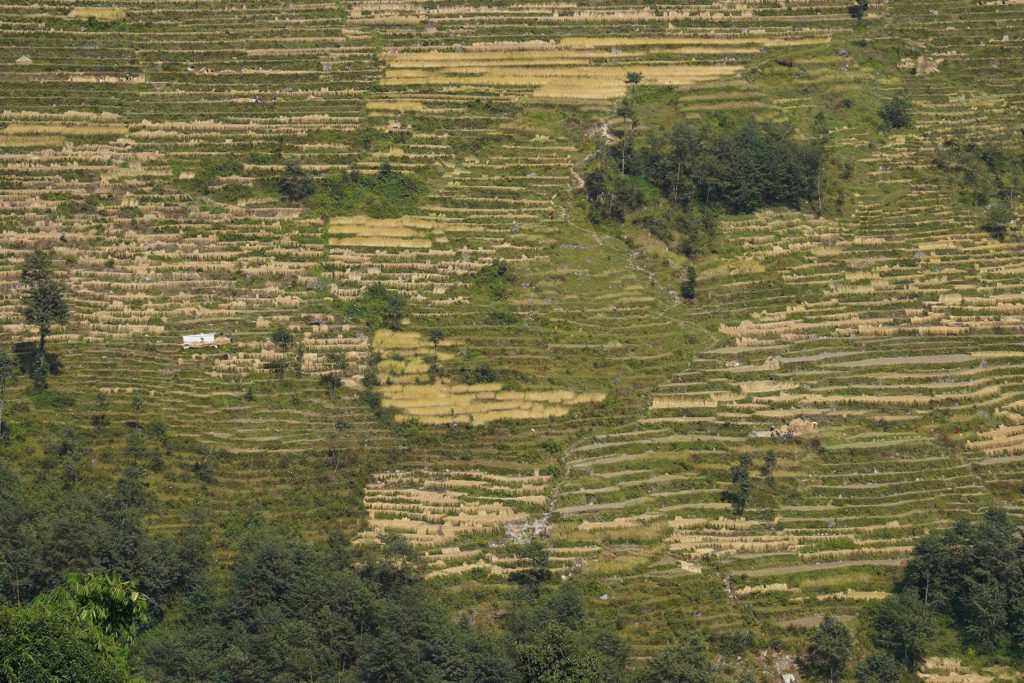 The giant Himalayan stinging nettle — what it means to wild harvest

«Regenerative process means that as you produce, you’re improving the Earth» – how to go beyond sustainability, introducing Himalayan Wild Fibers

The giant Himalayan stinging nettle is a plant that grows in a spontaneous way in the Nepalese Himalayan regions. Propagated by seed dispersion as well as by underground rhizomes, it forms large colonies. Renewable, perennial and non-timber forest product. It reaches around three meters in height and shoots per year, ready for harvest between the autumn and spring seasons. Himalayan Wild Fibers (HWF) is a social enterprise who manufacture and sell textile fiber extracted from the giant Himalayan stinging nettle. This grows in the remote mountain forests of the Himalayas. Founder and CEO of HWF, Ellie Skeele: «Our business model is straightforward. We buy the raw material from harvesters, we process and convert it and then we sell it. There are no consumer segments. The reason we exist is to create income for villagers».

Above the use of the stinging nettle as a fiber, for centuries it was used as a source of food and medicine worldwide. It has twenty amino acids and is rich in Vitamin C and iron. Useful in detoxifying the body as well as to alleviate anemia, keeping kidneys healthy and treating coughs. Regarding the fiber and textile properties of the giant Himalayan stinging nettle; the Research and Development in the field focuses mostly on generating livelihood opportunities for the surrounding villages.

Although the rural population living in the Himalayas have been making products out of the wild stinging nettle for a long time; the quality of the final product was nowhere near high enough to establish a significant market. The introduction of new designs – fiber, yarns and woven material – has opened the rural Himalayan regions to a possible future market. Although the R&D of nettle as a fiber is somewhat new; historically they have been used to make clothing for almost 3,000 years. The issue is not that it is a new fiber but that no one has found a way to commercialize it whilst staying within the sustainable properties of the stinging nettle.

The strongest and elongated of bast fibers

Giant Himalayan stinging nettles grow in soft soil and in yak grazing pastures. Having a long growing season of about five to seven months; thriving in warm subtropical days and cold high-elevation nights. It also benefits from summer monsoon rains on forest canopies. It grows primarily on the North facing slopes of the Himalayas at an altitude range of 1,200 to 3,000 meters.

New shoots start coming up in the spring and then grow all through the summer. They flower and seed all through autumn. Once the nettle stops growing, the farmers have a relatively large window to harvest. Either before the snowfall in autumn or during spring. Whilst the common and the giant Himalayan stinging nettle are from the same family (bast fibers), they are not in the same genus. Tensile strength and elongation are much higher in giant Himalayan stinging nettle than in common stinging nettle, linen, hemp and ramie. Its fibers are also the longest of the bast fibers.

Growing in a monsoonal altitude environment

Stinging nettles in general are viewed as a weed and grow in places where food crops can’t. Viewing it as less invasive and more tolerable. As with other bast fibers, the fiber is found in the stalk of the plant. It requires the removal of the natural gum that binds the fibers together and to the bark. Since it grows in a monsoonal altitude environment, the stinging nettle develops a much stronger bark and gum.

HWF has developed a proprietary retting process which uses GOTS-approved agents exclusively, focusing on water recycling and responsible wastewater disposal. For every kilo of fiber they produce from the stinging nettle, around eight liters of water is needed. The structure of the Himalayan nettle makes it less wrinkle prone and more resilient than linen. It also holds different thermal properties thanks to its large hollow lumen. Once retted and processed, the final product is strong and silky, becoming softer with more mechanical manipulation and wear.

Fiber bundles hanging to dry in the monsoon

Harvesting season for a farmer might mean traveling for about a week or so to highly remote forest areas and camping there for about two weeks. The stalks of the stinging nettle are cut using a multipurpose tool. The bark is then peeled off from the stalk in which the bark ribbon can be collected. Once finished with harvesting it, the villagers carry the bark ribbon out of the dense forest either on their own backs or using donkeys. HWF understands the beneficial properties of the giant Himalayan stinging nettle and instead of disturbing its development period and habitat by cultivating it, they work in parallel to its growth by simply harvesting it in the wild. It doesn’t require soil plowing with its consequent release of carbon into the atmosphere.

Cultivating disrupts many aspects of the natural habitat

Mono-cropping is part of cultivating processes, referred to as the agricultural practice of growing the same crop for multiple years consecutively and on the same land, depleting the soil of its minerals and nutrients. From an ecological perspective, mono-cropping eliminates the habitat for a variety of organisms. HWF wild-harvests the giant Himalayan stinging nettle, leaving the soil and carbon undisturbed and the roots ready to grow in the following seasons. By doing so, HWF works to go one step further than sustainability by employing regenerative actions. «Regenerative process means that as you produce, you’re actually improving the Earth», explains Skeele. «Most regenerative work is focused on animal husbandry so there are actually benefits to be derived from raising cattle if it’s done properly». The direct growth of the giant Himalayan stinging nettle is all done naturally and fed by rainwater — there is no intervention by HWF.

One of the benefits of giant Himalayan stinging nettle is its perennial rhizome root structure which helps improve the structure and fertility of the soil. To encourage growth, farmers may dig up some of the rhizomes, split them and then replant them to expand the land in which it grows. Skeele: «If they do that to the extreme, it could degrade the environment but it’s not in the villager’s benefit to do so because they have a long term vision when it comes to the surrounding habitat». Intense rainfall in the Himalayas can result in soil erosion, especially given they are landslide-prone mountains. Land where the colonies of the giant Himalayan stinging nettle grow can slow down the water velocity, keeping the fertile soil from washing down the mountain. Harvesting this nettle encourages forest protection and biodiversity.

It also strengthens the roots of the rhizome, further increasing the soil structure. Although this is based on anecdotal evidence, HWF plans on proving the benefits scientifically. «We’re going to be collecting data to prove this», explains Skeele. «All the existing ecosystem relationships still exist so there is no mineral depletion». As part of the Sustainable Development Goals, HWF generates a significant flow of funds into mountain communities, taking into consideration almost all the goals set.

The primary SDG they focus on is ‘decent work and economic growth’. Working on paying farmers fairly and providing them with cash income. The wild-harvest of the stinging nettle is during off-season for the farmers; permitting them to work undisturbed on their farm activities. Most of the villagers in the Himalayas are subsistence farmers. Meaning they produce sufficiently for their own use but don’t have any income. The main goal of HWF is to provide these farmers with cash income. To provide the families with the finance necessary such as to send their children to school.

The high cost of harvesting in a remote area

Skeele explains that to be able to maintain the balance between seller and customer, HWF helps the villagers to establish collective bargaining power. «It’s the fiber that gets pushed down in price. It’s the first place people look to cut costs. In a way we’re digging our own grave because we’re ensuring that the product will be expensive. Our goal though is to pay fairly». The harvesters are sent to HWF by a system in Nepal called Community Forest User Groups (CFUGs). Across the country, small groups of about twenty to thirty villagers are assigned forest areas. These are linked in order to strengthen the role of users in policy making processes.

The money is going to the people

Their aim is to help Nepal manage sustainability issues by operating on five-year plans to help with deforestation. «As we scale up, we don’t need to plow under new fields», says Skeele. «We can simply contact new villagers and ask them to negotiate a price and then to harvest. It’s easy to scale because it’s not taking land and growing crops. It’s already there». We have to admit that price imposes a challenge for this social enterprise.

Above the encouraged bargaining power that HWF supplies the villagers with, the labour-intensive harvesting also adds to costs. «You can’t build an entire global textile economy based on wild fibers. Hand harvesting in a remote area is extremely expensive», says Skeele. «The good news about it is that the money is going to the people, not into someone’s pocket who owns the factory. Nobody is getting rich but lots of people are increasing their wealth».

A company that manufactures and sells the fiber which is extracted from the giant Himalayan stinging nettle through wild harvesting. They focus the most on the eighth SDG (decent work and economic growth) by supplying cash income to indigenous subsistence farmers who live in rural villages in the Himalayas. The fiber is harvested and then brought to their production site at Kathmandu to be processed