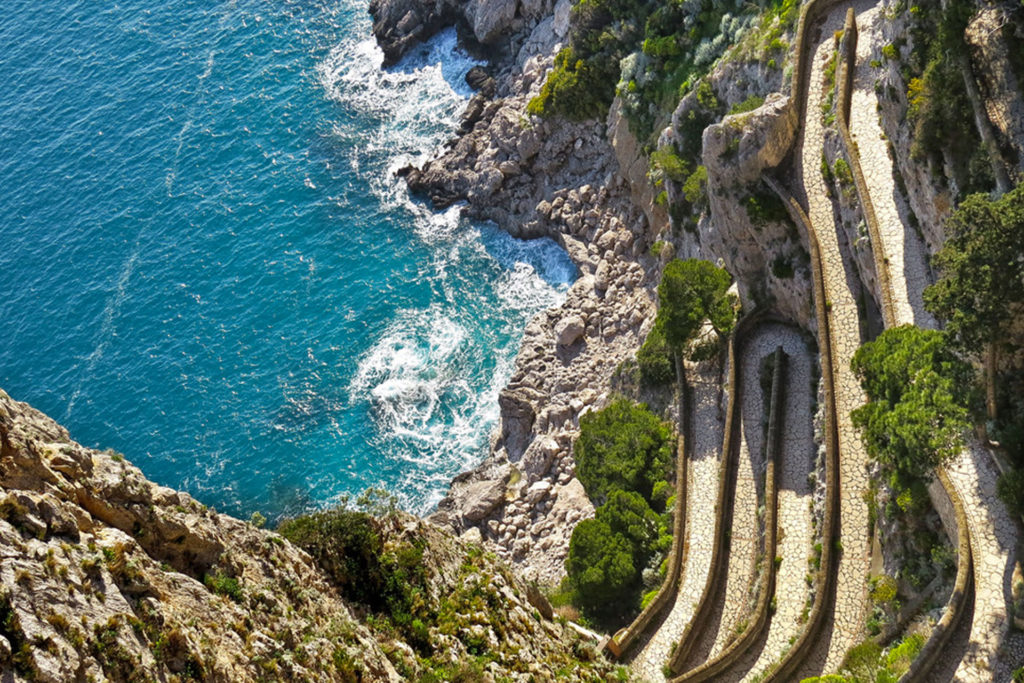 Carthusia, Capri. What does the most beautiful place in the world smell like?

Those who land on the island are dazzled by the light and surprised by the orography. It is the perfumes that get you drunk. Carthusia fragrances encapsulate the essence of Capri

Visiting the Island of Capri

There are no cars in the narrow streets of the centre of Capri, from the Piazzetta down to the Certosa, and westwards towards Punta Tragara. Only small electric vehicles similar to golf carts. They silently and quickly drive up and down the narrow streets, loaded with crates of champagne and provisions. They arrive, unload, back up and change course for other transports. Cats of various colours – from red to black – sit quietly half-hidden behind flowering bushes. The Certosa di San Giacomo is Capri’s oldest monastery. Its turrets, gardens and arches resemble a labyrinth. Behind me, is the Carthusia perfume laboratory, which takes its name from the monastery.

The doors and windows of the hotels in Capri are open to let in the perfect spring air and light. The staff puts the last things in place before the start of the summer season, after more than a year without tourists. May and June are the best months to visit the island. There is, in fact, enough space for a solitary walk between the villas hidden behind the gates and the sea.

The light and the orography

On the way to Punta Tragara, the lady at the granite kiosk will stop you if there is not too much crowd. «You look like you’re from Capri, but I’ve never seen you. Are you a tourist?». Perhaps it’s the vintage patterned shirt I chose on purpose before leaving that confuses her. She gives me directions down to the sea, and also offers me her lemon drink.

The light and the orography dazzle and surprise those who land on the island. Slopes, terraces, cliffs and the sea. But it is the scents that get you drunk. You can smell them everywhere on the island. Fruit trees, medicinal plants and flowers, in fact, characterize the location.

Along the avenue leading to the hotel where I am staying, two long rows of rosemary plants mark the way. You only have to rub them a little with your fingers to feel the truth of nature again. Those who live in the city know rosemary in the disposable packets of the supermarket, if you really want to prepare a gourmet dinner.

The story goes that Giovanna d’Angiò – reigning queen of Naples and titular queen of Sicily and Jerusalem – decided to visit Capri without much warning. It was 1380, and the prior of the Certosa di San Giacomo hastened to make preparations, arranging for bouquets of flowers made up of the eighty most fragrant species in the area. Nevertheless, the queen did not arrive – a sea storm forced her to cancel her trip.

In the meantime, the Carthusians had soaked the flowers in water, where they remained for three days. When it was time to throw them out, the prior noticed that the water had acquired a fragrance unknown to him. He, therefore, turned to a religious scholar of alchemy, who identified the source of the fragrance as Garofilium silvestre from Capri.

Seven centuries later, in 1948, the new prior of the Certosa rediscovered the old perfume formulas. Under licence from the Pope, he revealed them to a chemist from Piedmont, who created the smallest laboratory in the world – Carthusia, i.e. Certosa. Between 1952 and 1953, the laboratory moved to its current location in Viale Matteotti.

The Gardens of Augustus

Today, that laboratory is more active than ever and makes Capri perfumes, which the whole world appreciates. The location is strategic. While immediately opposite is the Certosa, a few steps further up Via Matteotti are the Gardens of Augustus. A botanical park containing specimens of the island’s flora, flowers of every colour and ornamental plants.

They were once called the Krupp Gardens, named after the German steel industrialist who bought some property on the island in the early twentieth century, with the intention of building a villa there – Friedrich Alfred Krupp. After World War I, the gardens were renamed the Gardens of Augustus by the city council, in honour of the first Roman emperor. From here you can enjoy the most coveted view of Capri. A panorama that embraces Mount Solaro, the bay of Marina Piccola, Via Krupp (a winding, scenic road closed to tourists for safety reasons, due to the rock face) and the Faraglioni.

The Gardens of Augustus are a place dear to Carthusia’s CEO Silvio Ruocco, who – as he has said on several occasions – spent much of his early life here. In 1998 Mr Ruocco took over Carthusia. Together with his daughter Virginia, Head of Marketing, he invested in transforming it into the cult brand of Capri perfumes that it is today.

The brand – renowned worldwide – employs many people in every sector, from the creation of the fragrances to logistics and retail. All stages of production take place by hand in the small laboratory. Outside, on the avenue, a triumph of flowers and a still transformed into a fountain gushing with water. Inside, a multifunctional space.

You first enter the boutique, which displays the brand’s entire collection. On the walls, the history of Carthusia as well as the history of Capri. Archive photos tell of the first experiments with essences, the old machinery, the father prior and the Piedmontese chemist at work, the Capri of the Sixties, alive, pulsating and populated by celebrities.

Virginia Ruocco shows us the back, the laboratory. Here even the machinery has adapted to the size of the place – the stills, the bottling and the packaging machines. The staff packs the perfumes and prepares them for shipping. The perfumes of Capri are here, contained in the many little bottles, in the air of the room and outside the door, without interruption. Carthusia’s graphics are everywhere. They depict a mermaid radiating flowers, in a metamorphic movement that evokes surreal and mythological atmospheres, of Capri’s classical heritage.

The illustration dates back to 1948 and is the work of Mario Laboccetta. A Neapolitan artist, he achieved fame in Paris in the 1920s and 1930s as an illustrator for magazines and prestigious editions, such as Les Fleurs du Mal, Éditions Nilsson, 1933. After eighteen years in Paris and a stop in Milan, Laboccetta came to Capri, where he died in 1988. The dimension in which Laboccetta creates is that of the dream. The subject is the starting point for a journey of fantasy.

Carthusia has launched the fragrance A’mmare. It celebrates birth – and rebirth – from the beauty of a fertile, spontaneous garden overlooking the sea. An almost secret garden that opens up amidst the alleys of Capri. It also weaves under the veil of the waves, bringing coral branches and plant compositions to the shore, together with shells and unexpected explosions of a natural heritage illuminated by a sunny day. It is a contemporary viridarium, echoing the classic viridarium of the patrician homes of ancient Rome.

Luca Maffei designed The Eau de Parfum. The professional is also the author for Carthusia of Essence of the Park, Terra Mia, Tuberosa and the reinterpretation of Gelsomini di Capri. In the citrus opening, Bergamot and Rosemary stand out, a delicate counterpoint to Salt Crystals. While the heart contains aquatic and marine notes, illuminated by Mint Leaves, which also expand to the woody base, made more rounded and enveloping by Patchouli and Musk.

Paola Tassetti designed the bottle of the fragrance. The artist owes her international fame to a specific and recognizable language. The expression of research across several disciplines, from biology to botany, from anatomy to archaeology and architecture.

Together with A’mmare, Carthusia debuts for the first time the sunscreens with an eco-sustainable – and re-sealable – packaging. They save fifty percent of the plastic normally used for cosmetics of the same size (100ml). The items are available in the double all over version SPF 30+ and 50+. The After Sun also accompanies them. As for their formulation, it has been developed following the protocol of the Ocean & Reef Care programme. The filters used are in line with Hawaii’s SB No. 2571, which prohibits the use of Oxybenzone and Octinoxate so as not to harm coral reefs.

To complement these sea-inspired novelties, Carthusia has designed a capsule collection of limited edition handmade silk garments that will be on sale exclusively on the brand’s online store. For the occasion, it collaborated with Laboratorio Capri, an ancient Capri tailor’s shop that has been a point of reference for the international jet set visiting the island since the 1960s. Four versions of beach towels on a white or blue and white striped background with orange or cobalt grosgrain edging reproduce the complete design of Tassetti’s viridarium.

Carthusia is a perfume brand founded in 1948 that hails from the Isle of Capri.