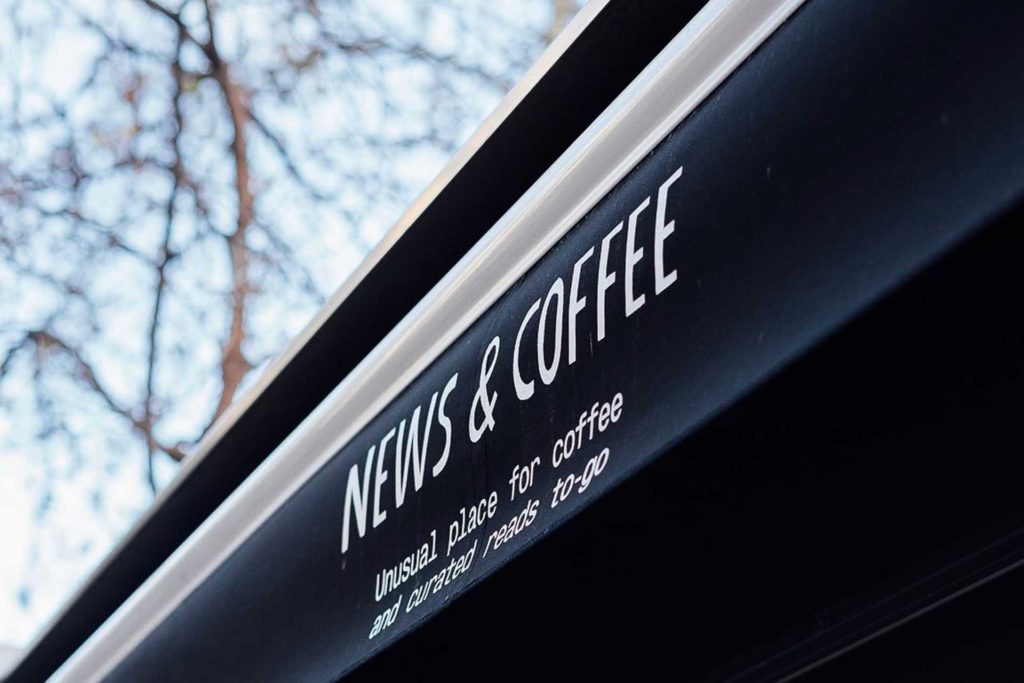 News & Coffee, Barcelona. The kiosk is a social nexus

«We are on the street. We don’t belong to the four walls. There is no limit of a window or a door to come through». In conversation with founders Pablo Pardo, Gautier Robial, Yaël Hupert

Strolling on the boulevard of Paseo de Sant Joan in the neighborhood Dreta de l’Eixample, one cannot miss this hipster kiosk with a facelift. Betting at giving the ailing newsstand kiosk culture in Barcelona a reincarnation, News & Coffee is a place for coffee and curated reads to-go. Characterized with nineties hip-hop music, and racks on racks of eye candy covers, the fragrance of roasted coffee beans as well as third-wave baristas, this eight-square-meters kiosk in the middle of a residential locale is making heads turn. «This is the spot in Barcelona where the morning action happens».

People passing by make a stopover to scan the curated magazines, pick-up the daily journal, and sip on their preferred brew. The kiosk stocks an assortment of magazines, zines, postcards, journals as well as newspapers. The usual indie-suspects populate the stands. Apartamento, Fucking Young, Ark Journal, 032C, Popeye, Victory Journal and The Gourmand. They also keep a range of international newspapers. Le Monde, The Guardian, The New York Times, China Daily, etc.

The promenade of Paseo de Sant Joan represents the modern history of Barcelona. Art nouveau apartment buildings, in fact, line up the avenues of this barrio with an upper-class gentry. Further, comic bookshops, cafes, garden beds, lanes for bikers, fountains and sculptures mark the area. The neighborhood is also home to the Catalan modernist building, Casa Macaya, built by architect Puig I Cadafalch in 1901.

The vision of transforming the kiosk at Passeig de St Joan arrived one morning when Pablo Padro was cycling around the barrio. «It was a lightbulb moment». This kiosk had remained closed and neglected for three years before News & Coffee took over. For Padro, the inspiration was the street culture of New York. He therefore wanted to project a similar vibe. «I always had the vision of people running on the streets with a cup of coffee and newspaper in their hands».

His desire to save the dilapidating kiosk culture gave birth to a concept that changed the fortune of the kiosks in Barcelona. Pardo, an immigrant from Argentina, arrived in Barcelona twenty years ago. He landed in the world of hospitality by default and learned the ropes of the business on the job. Working at a five-star hotel, assisting on a private yacht, drafting menus for restaurants, and roasting coffee in his leisure time. Over the years, through his professional evolution, he has found his groove as a hospitality consultant and then established the agency Mis-en-place, which provides three-sixty degree solutions for F&B concepts.

Padro also took part in the opening of restaurant and bar concepts in Barcelona. He, in fact, started a food truck in the city a few years ago called the Rolling Food. «This experience helped me learn how to get the most out of small spaces», adds Pardo. To execute this concept he called out for professionals who are masters of their domains. Coffee connoisseur, Davide Datti, handles the machinery and equipment for them. Datti is the brand ambassador of Victoria Arduino coffee machines in Spain.

Gautier Robial, who worked as the Digital Lead for Wrangler in Europe, is in charge of News & Coffee’s strategic development and growth. «I’m a strategy and numbers guy, while Pablo is the ideas man. I create business models out of Pablo’s ideas and structure them», says Robial. Antwerp-born, Yaël Hupert, a make-up artist turned portrait painter, oversees the editorial selection of indie titles while working as the art director of the store. Since joining the founders Pablo, Davide and Gautier, Yaël has taken the magazine range from fifteen titles to over a hundred.

A Belgian, an Italian, a Frenchman, and an Argentine – international influence with backgrounds that span the fashion industry, fine art, hospitality, and high-voltage coffee machines. Emphasizing the value of teamwork, Pardo adds, «the success of this project depends on the people behind it. It is, in fact, the synergy of the team’s skill sets honed over the years that created all of this».

News & Coffee serves as a blueprint for the cluster of replicas that have emerged around Barcelona’s city center in the past year. «People are trying to duplicate our model but are falling short. They think it’s a simple execution. But there is more than what meets the eye. It is Pablo’s eighteen years of hospitality experience compressed in an eight square meters space», adds Robial.

For generations, a day in Barcelona begins with picking up the newspaper at the neighborhood kiosk and reading it through in a bar with a cup of coffee. As newsprint sales fell and tourism increased the newsstands turned into souvenir shops brimming with keychains and fridge magnets. Over the past few years, three-hundred-and-thirty-eight kiosks in Barcelona rolled down their shutters for the last time. While others are still struggling to adapt, Padro and his team are redefining the institution of kiosks. «We took what existed, cleaned up the clutter, removed the dust, and presented it with a focused concept», says Hupert.

The News & Coffee team designed the interiors and look of the kiosk. The idea was to undergo a facelift and to change the visual identity without touching the existing context and structure of the kiosk. «Kiosks belong to the city government and cannot be changed structurally. Therefore, presenting a newsstand with a sense of modern aesthetics wasn’t easy to achieve». Each kiosk bears an artwork showcasing the works of visual artists – Robert Lönnqvist, Super Roger, and Noemí Rebull – from Barcelona.

«From Instagram visuals to the layout of the store, a whole deal of strategic thought has gone behind every aspect of building this brand», adds Robial. The 1992 Olympic games changed the face of Barcelona. The city witnessed a surge in tourism that only grew in the past decades. It, in fact, altered its demographics and transformed the Catalan capital into a global hub of tourists. «Thirty-two million tourists came every year to a city with only 1.8 million inhabitants».

After the pandemic, a tsunami of tourists has washed away from the city-scape, making it a ghost town. «Barcelona city is coming out of a complicated relationship with its success». It is around the same time, the residential areas of the city started to boom, and in this case the neighborhood of News & Coffee. «We want to do cool things for the people of Barcelona and sustain what is falling apart. The tourist will follow», says Robial.

The structure and location of the kiosk makes it a preferred spot for the people passing by. The kiosk, in fact, is a social nexus as well as a point of sale. It lies at the heart of the community belonging to the neighborhood. «We are on the street. We don’t belong to the four walls. There is no limit of a window or a door to come through». This eight-square-meters space invites people from all walks of life. Catalan grandfathers with their walking canes to fetch their morning reads, kids of the city walking in to listen to some hip-hop while talking about flat-whites, artists enquiring for the new edition of magazines, and grandmothers engaging in gossip. «News & Coffee is a concept for everyone», adds Padro.

The newsstands and coffee bars have been the twin pillars of any barrio, or neighborhood. Pardo’s instinct of marrying the two urban institutions ushered in a new vision for Barcelona’s kiosks. Pardo imbibed coffee roasting skills, three years ago, while working with Christian Meier. An ex-professional cyclist, who retired to the Catalan city, and opened specialty coffee shops. «Christian offered to teach me to roast. After a few months of learning, I found myself in charge of roasting coffee for all their shops». Padro also met Davide Datti through Christian Meier.

The coffee is roasted fresh every week by Pardo at Approachable Coffee roasters in Girona. The beans are procured through sustainable means and the coffee is served in recyclable cups. «Our mission is to make specialty coffee more affordable and accessible for pedestrians as well as locals. Why should something like coffee be made into a luxury commodity?», adds Padro.

Further, for the team at News & Coffee print is not dead. «We are tired of this narrative and want to change it». Evangelist of the print news form, Hupert envisions the future of newspapers as collectibles. «Nowadays vinyl is sold more, it is a market that is growing again. Old-fashioned is fashion. In the end, everything takes a full circle». Through their exposition and display of titles at the kiosk, they have been able to push sales for the magazines and newspapers. «When someone stops by for coffee, they reach out for the newspaper and magazines by default», adds Hupert.

While running an independent bookstore that focuses on indie-publications, Hupert acknowledges the challenges of being in a niche ecosystem. «We depend on passionate people who publish zines along with having a day job. A bunch of magazines stopped publishing during the pandemic. Most of them are bi-annual and get sold out quickly. Procuring magazines is a hustle. You have to keep yourself notified at all times».

It didn’t stop at just one kiosk for Padro and his team. News & Coffee has, in fact, driven forward in the face of a global pandemic, opening up at the business and retail hub, Plaça de Francesc Macià, and on a square in Gràcia in November and December of 2020. «The pandemic year accelerated a business narrative that focused on small businesses rolled out with a purpose while offering something to the community. We fell within this narrative without realizing it».

At the present, the team has their hands full with the functioning of the existing kiosks. As for the future, Gautier and Pardo want to work towards growing the business. News & Coffee is a prototype and an example of what they can do when they’re controlling every aspect of the concept. «We are taking it one step at a time and not being over-ambitious. We don’t want to kill the soul of the project as we believe we are into the soul business more than anything else», says Robial.

News & Coffee is a hipster kiosk with a facelift. It is a place for coffee and curated reads to-go.