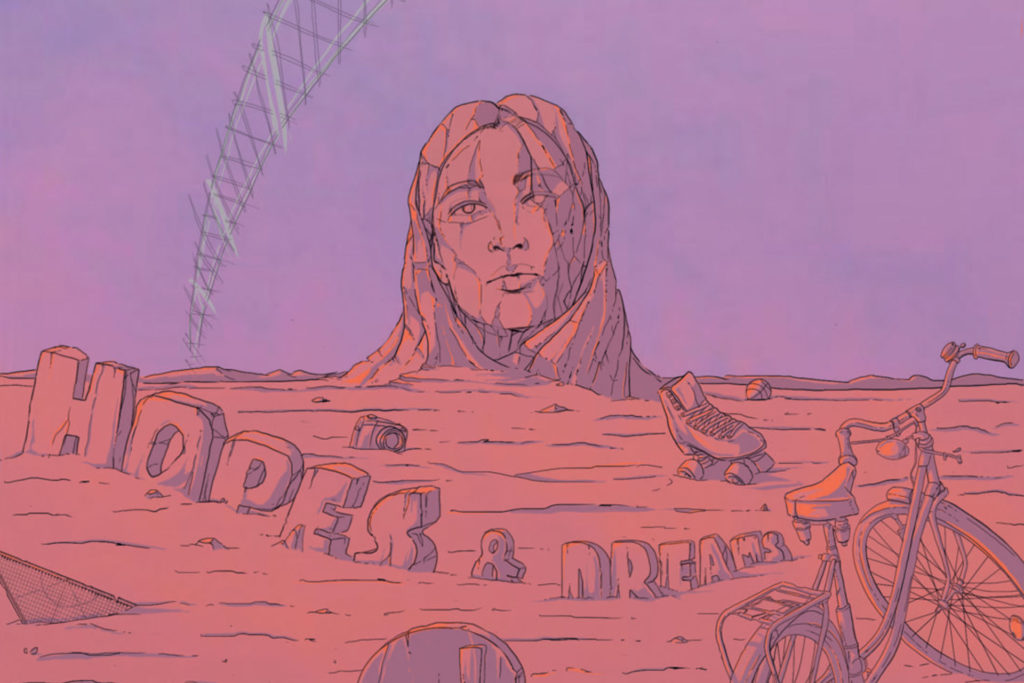 From Afghanistan to Ukraine, posters to raise awareness: Now You See Me Mória

«Right now we are exposed to so many photographs that we have become numb to the pain of others». The posters are made from pictures taken on the field by ordinary people

Now You See Me Mória – poster project to raise awareness

The project started in 2020 by Dutch photographer and photo editor, Noemì. The posters were on show in national museums as well as being handed in the streets all across Europe. The posters by Now You See Me Mória are based on pictures shot by refugees in the camp since 2016. They are then elaborated through design in order to give a message. They have now activated to tackle the consequences of the war in Ukraine on the civilian population.

The first refugee camp opened in Greece in 2004 but was shut down in 2009 due to its inhumane conditions. At the time, around fourteen-thousand people were living there. To solve the resulting crisis, five hotspots were opened in the following years: Lesvos, Samos, Chios, Kos and Leros. Mória refugee camp first opened in 2014 in Lesvos. The camp was designed to host three thousand people. Twenty-thousand refugees currently live there, among which seven thousand are underage. Living conditions include no electricity, scarce water and for most of the migrants, no shelter at all. Lucky ones have tents and makeshift structures. In September 2020, a fire burned down a portion of the camp where more than twelve thousand were living.

Noemì and the father of her child had met in the Netherlands, but he had been through the Lesbos camp in 2015. In 2020 she lost him due to the consequences of forced migration. When the fire occurred, she could not sit back and do nothing. The same happened the following year with the Afghan crisis and is happening now with the war in Ukraine.

Testimonies of the humanitarian crisis in the EU

Getting to know the work of the young photographer, Amir sparked the project in her mind: «I have a friend who went to Mória to film a short movie during the pandemic and there he met Amir, and he showed me some of his photographs». In the middle of the pandemic, the media attention on the Greek camps was low: «It was about what was going on in Mória camp»before the fire, although conditions were tougher than ever. Amir took the pictures to fight the radio silence: «When I saw his photos, I saw what he was trying to do, he was desperate and trying to get his message across». With her background as a photographer and editor, she wanted to help «bringing his pictures outside of his Facebook page,» where almost no one was seeing them. They started with an Instagram account. The result was unexpected: the page now has more than forty thousand followers. A month after starting, two photographers also joined. Ali from Afghanistan and Quataeba from Syria. Later on, even more contributed with their work. But being digital was not the point. Amir tried to go through the legal procedures to migrate three times. He lived in the camp for two years but ended up escaping from there.

The issues with the way media traditionally report on migrations

One has to do with the news cycle. The same dynamics happened both with the Afghan crisis and the Moria fire: «There were fifteen days of high media attention but then everything went back to silence». The other issue is the way refugees are portrayed through the photographic medium. Refugees are portrayed in two ways: either as intruders or victims. «In the first case, it’s always in a group»and the language adjusts accordingly, using words like tsunami or invasion. It makes it «difficult to feel empathy». The only other option does not make it better:«In this case, there are always close-ups portrayed of a woman or a baby or a father with children crying». This triggers no action: «The problem with this type of imagery is that right now, we are exposed to so many painful photographs. We have become numb to the pain of others. You feel pity but also detachment (this is happening far away from me) and powerlessness (there’s nothing I can do about it)». The same is true when pictures look too perfect: «Sometimes you just focus on the image, what we want to do is make people focus on the reality behind the image».

Now You See Me Mória: Changing the narrative

Pictures shot by Amir at first were «a way to scream to the people: this is still happening, and we need to do something about it». Now You See Me Mória aims to change the narrative: «They are victims of what is happening, but we focus more on showing their strengths». The idea is to let the refugees portray themselves, and to do so in a way that makes the viewer relate. The way to reach this aim is by shooting pictures of daily activities. This includes days of celebrations but also «sharing photos of the constructions that they are able to make». The organization of spaces is key for the life inside the camp. Although there is almost nothing, refugees have become able to build furniture for the inside of tents themselves.

This also includes structures to provide otherwise absent shade to defend against the heat of Greek summers. All of this is a way to find dignity even in the worst nightmare. Showing this is to show resilience. «The idea is showing something you can relate to», says Noemì. «That can really create empathy. If you can relate with someone, and you then suffer it’s going to be more difficult for you to just accept it and do nothing». Pictures taken in the camp are less aesthetic but could be shot by anyone with a smartphone. According to Noemì, traditional photography runs the risk of enforcing negative patterns of representation. «When science shows that immigration actually brings money to a country».

The Political Role of Design

«Six months after we had started»,says Noemì, «I saw a project made by a German photographer in South Africa that was made with posters». This is where design came in. The first goal was in involving people who might not have thought about these issues otherwise:«We already had a lot of people following the project but it was mainly people who were already interested in human rights issues and refugees. It was very important to confront the reality of the people living in the camp with people who are against or afraid of migration». At that point, Now You See Me Mória wanted to use the public space, and occupy it with challenging ideas.

«Social change will come over time, when more and more people are going to oppose it. Educating people, you create social pressure.» More than five hundred designers across the globe contributed by creating posters. A symbolic launch day was scheduled for February 14th, 2021, when the posters were hung on the streets. This was in public and private spaces in twenty-seven countries of the European Union. It was included and showcased in exhibitions from the Stedelijk museum and Foam center in Amsterdam, to the Weltmuseum in Vienna.  The Action Book was published after. The book is made from a collection of the posters that can be removed and hung. A call to action asks activists to give the book to figures of power in public. This would act as a reminder of what is going on and improving conditions for those who suffer. It is all based on the principle that «we cannot remain silent».

The same approach was extended to the Afghan crisis in 2021 with a series of posters called NOW or Never. They portrayed the stories of those who left and those who stayed after the Taliban’s seizure of the capital. At the same time, inviting people in a position of power to act on the policies. Since the latest outbreak of war in Ukraine, the page has been activated to help civilians fleeing the country. They want to connect them with European citizens who might be able to help. Four million displaced people are predicted to cross the Ukrainian borders as a consequence of the conflict. Now You See Me Mória stands to help the people in the most practical way and tell their stories.

Now You See Me Mória

Is a collective based in the Netherlands and started by photographer Noemì and refugee Amir, shooting from the Greek camp of Mória. The open call to send artworks is always ongoing.