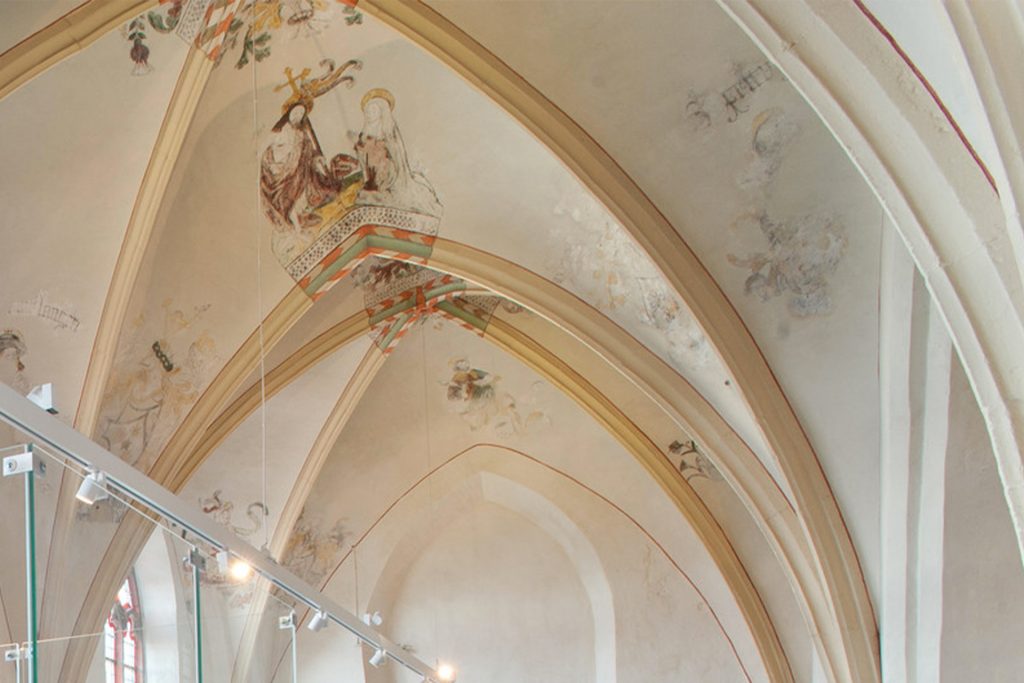 After a succession of fortune and ruin spanning six centuries, the new chapter in the life of Broerenkerk takes the shape of a bookstore – the Waanders family and the printing business

The Waanders family founder of the Waanders in De Broeren, Zwolle has a long history in the printing business. They founded the Waanders Publishing Company in 1836. Since then they opened two other publishing houses and nine bookstores spread across the Netherlands; although over the years they have sold them all. Mr Waanders entrusted BK Architecten with the project of turning Broerenkerk – with its elongated axis, high arches and stained-glass windows – into a bookstore.

This could attract customers and optimize the largeness of the church. BK Architecten came up with a clever idea to win the challenge. Adding a seven hundred square meter shopping floor while preserving the historicity of the church and its original aesthetics. They placed three additional floors in the side wing of the church between the original pillars, outside the central nave. The floors are not connected to the church. Therefore in the future they can remove them without damaging the original structure.

The Broerenkerk church in Zwolle, as many ancient institutions, has been both victim and protagonist of a range of historical events over the course of its six centuries of existence. Founded by the Catholic order of the Dominicans in 1466, in what at the time were the outskirts of Zwolle. Due to periods of social and political unrest, the construction came to completion in 1512 consisting of two naves and a single choir. In 1580, Zwolle was ravaged by looting and the fury of the Beeldenstorm, or Image Storm; an orthodox Christian movement rooted in a word-by-word interpretation of the Bible.

The conversion of the church into Waanders in De Broeren bookshop

This movement condemned all visual depictions of Jesus, God and the saints. This resulted in the destruction of frescoes, statues and mosaics throughout the country. The Dominicans’ Catholic taste for opulence and artworks drove them out of the city. Broerenkerk, now battered and undressed of all its adornments, fell into disrepair. It was not until 1640 that the church got back to use, this time by the Protestants; who managed to turn Zwolle into a stronghold of Calvinism.

In an attempt to demonstrate the magnanimity of the governants and appease ethnic tensions in the city; starting from 1760 they gave a part of the cloister to the Jewish community for use as a synagogue.. In 1982, Broerenkerk ceased its role as religious institution and became property of the municipality of Zwolle. This employed it as an exhibition space, until Mr Waanders gave new life to the imposing church, turning it into a bookshop in 2013.

The materials used for the new structures of Waanders in De Broeren, Zwolle

With the central axis left uncluttered, one can still feel the spaciousness of the church. The choice of materials used for the new structures – three shades of wood and white hand-painted plastering – derived by their soberness. That way, the main hues in the store would come from the warm tones of the church and book covers. Two elements catch the eye of the visitors on both sides of the axis; enticing them to look over the entire length of the Broerenkerk. On one side, the Scheuer Organ, donated to the church by Pieter Queijsen in 1824; on the other side, above the choir,  a modern stained glass window designed by Norwegian artist Kjell Nupen.

The enhancement of Broerenkerk’s artistic value had to coexist with the need to sell the products. In a store that develops over different levels, the strategy is to get customers on the top floor, to allow them to see all products. With this in mind, BK Architecten created an attractive central staircase, overlooked by an eleven-meter-high bookcase. Climbing half a level at a time, customers end up straight under the renovated church arches; where they can admire the paintings discovered by surprise during the restoration of the vaults, in 1983. The hundred and thirty-nine paintings date back to the 16th century and are almost intact. They consist of depictions of saints, scenes from the life of Christ and coats of arms of the nobles families in Zwolle.

2010 archaeological investigation in the crypts under Broerenkerk

On the third floor, underneath the vaults, visitors can admire a replica of the skeleton of a young mediaeval man named Herman. In 2010, during an archaeological investigation in the crypts under Broerenkerk, they unearthed a human skeleton. Further investigation revealed that it was a young murdered man from the 15th century. His hands tied together at the front of the body with a leather band around the wrists. His skull fractured as if it had been bludgeoned.

The truth about Herman’s death will never come to lightmaking it one of the most ancient ‘cold cases’ in the world. However, the discovery of his body generated all kind of speculation among the people of Zwolle. Even inspiring a musical titled Who Was Herman?. Bertrand Maas started working in a former bookstore owned by the Waanders family, in a small 12th-century building in the historical centre of Zwolle, twenty-five years ago. Today he is the manager of Waanders In De Broeren. He is in charge of the non-fiction section of the bookstore’s catalogue. At the same time six more persons are responsible for the other sections.

«There is no point in dedicating an area to Russian authors, if the selection is done with superficiality or ignorance. Everybody knows the masters Tolstoj and Dostoevskij; but wouldn’t you read something by Vladimir Sorokin, nicknamed ‘the Tarantino of Russian literature’?» he comments. «How can we advise you, if we have no expertise in what we are discussing?». Thanks to its renovation, Waanders In De Broeren can count on plenty of space to display books and stationery.

The catalogue ranges from Dutch and foreign literature to cooking books, children’s literature and non-fiction. The canned organ is often played during the shopping hours; creating a kind of sacred atmosphere while the customers browse through the bookcases. Other cultural events that take place in the bookstore, like cooking classes in the café and restaurant housed in the church; book launchings and meetings with international writers. But the allure of Waanders In De Broeren, according to Bertrand, «is also owed to the mystery surrounding our ‘mascotte’ Herman».