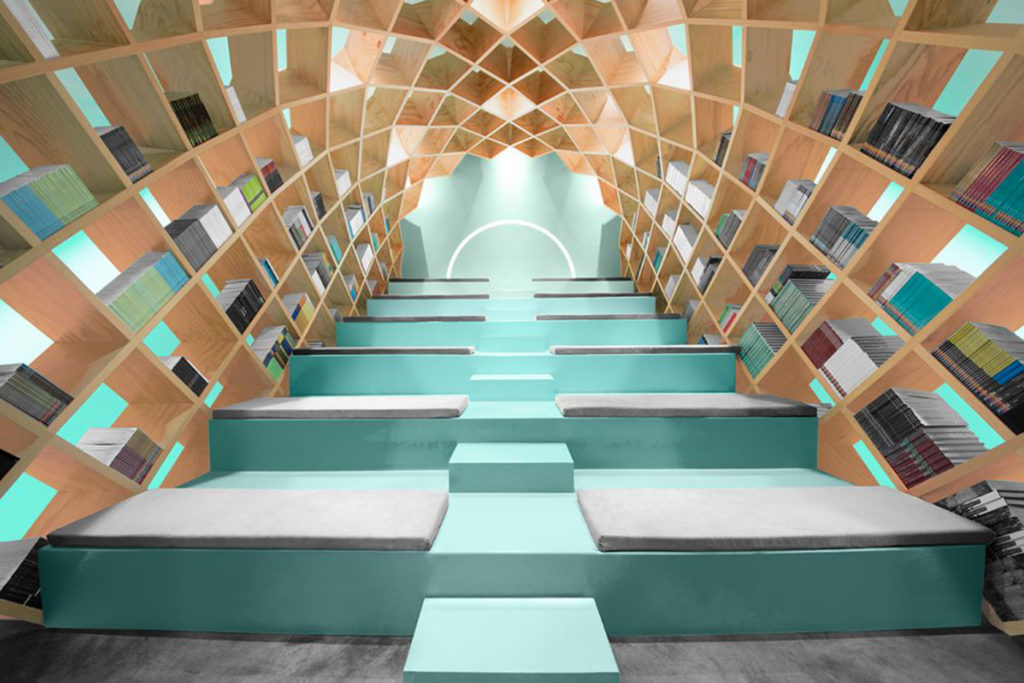 Librería Conarte, Mexico. A wooden dome for readers in the center of Monterrey

In the heart of Nuevo León, Mexico, Barrio Antiguo, known as the commercial and cultural center of the city during the Viceroyalty of New Spain. Eventually, it turned into a nightlife district at the beginning of the twenty-first century; due to the State’s attempt to create reforms aiming at transforming the urban area but ceased as criminality rose. A contemporary restoration project supported by Conarte – the Council for Culture and Art of Monterrey – aims to promote artistic expression; preserving and enriching the local culture and give new life to the area.

The indirect influence of design and architecture on communities and society pushes artists to suggest innovative solutions. Therefore, to improve experience and engagement between individuals and concepts. Projecting urban spaces that combine aesthetic and function results in higher levels of sociability among the neighbours. Also, adding the role of education in reducing criminality and social gaps; by building a library with a design that attracts people and suggests comfort. With this in mind, in 2015, Conarte commissioned architectural firm Anagrama to design Librería Conarte. A library and bookstore in the Barrio Antiguo, to value the reading experience. As a result, Anagrama restored a ninety-square-meter space inside an 18th-century building. A few steps from Megaplaza, the city center, and transformed it into a visionary reading nook.

To fulfill this vision, Anagrama designed a shell of latticed pinewood bookshelves that wraps the reader in, creating a sanctuary. Entering the building o, the visitor walks across a yard to access the lobby. This white room with a MDF counter, On the back wall, painted in seafoam blue. An arch leads to the adjacent reading area, where shape and function together in a visually appealing structure.  A classic arched gallery distorted by a rhomboid structure that resembles a cocoon, a symbol of shelter and protection. The wooden pattern which shapes the dome not only serves as bookshelves with more than five hundred volumes displayed. But it also plays with visual perspective. Lighting to create optical illusions, and give the observer a sense of movement.

Stairs cut through the middle of the dome, while padded seats on either side play as reading spots. For the walls and the stairs they used the seafood blue. So as to shade from darker to lighter tones giving the room depth. The lit-up semicircle at the top of the stairs simulates the vanishing point of the wooden structure; by balancing color and perspective. Self-supported and independent from the outer walls. The choice of the materials, wood and MDF, was to reduce the impact on the environment.

Between the lobby and the reading room, Anagrama was able to maximize the space; and create a storage area for books. Zaha Hadid claimed that «on the one hand it’s about shelter, but it’s also about pleasure». With its use of space, Librería Conarte balances the allure of Renaissance architecture; and with its concern for symmetry, proportions, its predilection for arches, the essentiality of modern architecture; and the homage to nature reflected in the colors and materials.

As a result, in 2016, the magazine Wired included Librería Conarte in the ten most beautiful libraries in the world for its innovative and simple design. It is not the only project realized as a result of the collaboration between Anagrama and Conarte. Niños Conarte is another architectural construction built by Anagrama. again as a contemporary library but this time focusing on children’s literature. In comparison to Librería Conarte, Niños is an asymmetrical reading platform inspired by Monterrey’s mountains and landscapes.