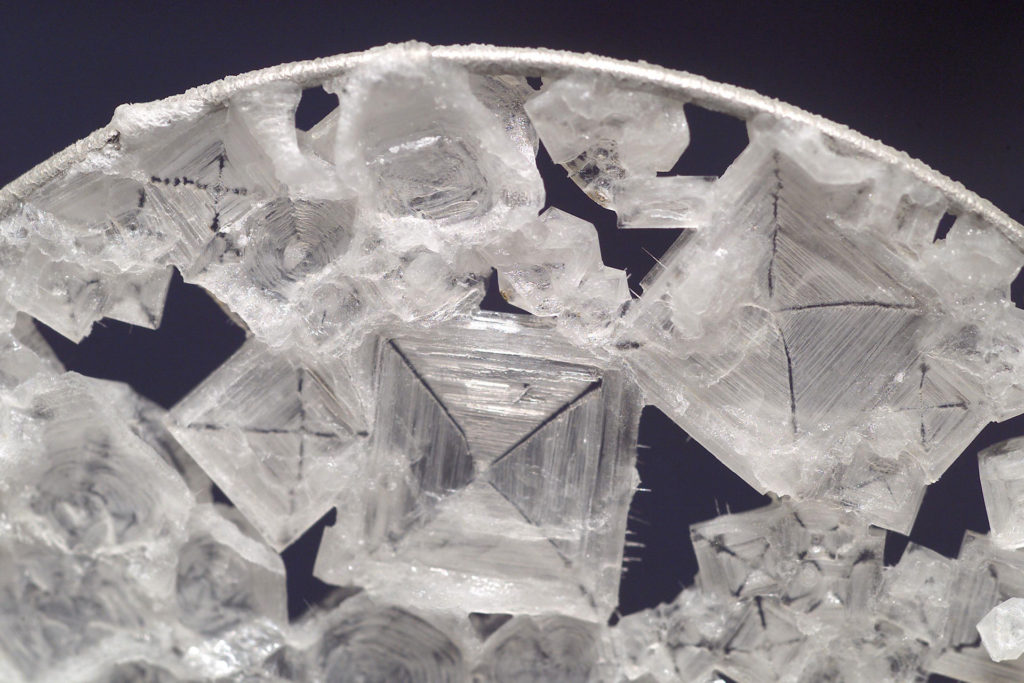 More salt doesn’t mean more melting. How salt spreading on paved roads has become a bad, diffused consuetude in winter months and why it represents a threat

Between 15 and 32 million metric tons of salt are used each year to keep roads snow-free. The frequent use of road salt in the snow-belt regions of the world guarantee commuters and operators safe travel. Simultaneously, it had made road salt an emerging pollutant. The accumulation of road salt in surface and groundwater is a problem. It compromises drinking water as well as the state of water streams.

From treated surfaces to nearby ditches, culverts, and streams. Salt causes salinity spikes in affected water bodies, and sudden changes in the aquatic environment. Meanwhile, while other types of salt enter the soil and groundwater, local ecosystems retain them for decades. Road salt’s – or de-icing – first compound is halite. It is a form of table salt or sodium chloride (NaCI) and a naturally mined mineral used to melt ice. Different from purified and edible table salt, road salt still contains impure minerals.

When crushed and packaged, it is common to find road salt in mined or impure form. The latter meaning chemical additives and sand are mixed for different purposes; as well to delay in the reformation of ice. Breaking down into two ions, sodium and chloride; salt allows the dispersion of water molecules. Pushing them apart, thus making the ice harder to reform, and so delaying mechanical removal of the snow.

Categorizing different types of road salt according to their components

The first is sodium chloride, commonly referred to as salt. It is the most used method for de-icing because it is inexpensive and widely available. Then there’s magnesium chloride, often adopted as a pre-wetting agent for de-icing salt in its liquid form.

Similarly to sodium chloride, magnesium is inexpensive but also less corrosive compared to other chemical agents. Obtained by evaporation, they extract it from the natural salty water sources. This is to say that there is a heat release while it dissolves and thus helps melt the ice and snow.

Another option is calcium chloride – used for dust suppressant purposes on gravel roads – produced or naturally found. This chemical is a powerful de-icing salt agent as it can dissolve ice at extremely low temperatures. However, since calcium chloride is a relatively more expensive type of road salt, it is not something that people use commonly.

The role of road salt in water contamination

Each year, according to The Conservation Foundation, Americans spread more than 48 billion pounds of salt on roadways. Among the main reasons given to explain this excessive consumption; there’s industrial development which has been occurring over the last fifty years. Resulting in the installment of more and more roads. This results in the increase in expectations of being able to drive in any weather or climatic condition. More roads, higher expectations, more salt.

The Illinois State water survey has been monitoring the increase in water salinization for the last thirty years. Tracking for instance the discrepancies between rural and urbanized areas, where numbers tend to go up. Chloride has an impact on water life as well.

Even though living organisms can tolerate a certain range of salinity in their habitat; lethality is rare. Therefore, the stress level on these species ,caused by road salt that contaminate their environment, is injurious. Additionally, on top of the aquatic food chain, fish and macro invertebrates registered a sudden change in their conditions; and life stages, such as masculinization of specime and sex reversals.

Another side effect is the inhibition of spring turnover, the natural cycling of water caused by temperature changes. Without turnover, the bottom waters become excessively briny and inhospitable for living organisms.  The amount of chloride concentrations associated with a liveable environment is typically around 0.5 and 10 mg/L; to maintain regular aquatic life. Reproduction and development inhibition occurs once the salt concentration reaches 100 mg/L in freshwaters. It should never exceed 860 mg/L. Otherwise it alters community structure, leading to mortality in worst cases.

The impact of road salt on soil and dry surfaces

Road salt is also guilty of reducing cars’ lives by speeding up the rusting process; thus damaging the surfaces we drive on. The chlorine ions contained in salt alters the chemistry of water. As a consequence it makes it more corrosive when it comes into contact with materials such as concrete and steel. As a result, road salts increase existing strains on aging structures. This process results in bridge failures, cracking and other forms of weathering in highway surfaces.

De-icing salts have widespread effects in nature too. The displaced minerals spread in soil and groundwater creates a traumatic condition for the soil. Thus known as physiological drought, which is a deficiency of water. In this case, trees are unable to absorb water due to a very high ionic concentration. As a consequence osmosis does not occur. Physiological drought is a recurrent phenomenon in nature. However it has become more frequent for trees on the sides of the road.

More salt doesn’t mean more melting. In the 1970s, transportation agencies began to recognize one thing. Using large quantities of road salt could harm the environment and infrastructure. Since then, research has been done to document and improve best management practices for maintaining ice-free roads. Organizations such as Clear Roads have gathered accessible methods of salt reduction.

First, there is anti-icing and pre-treatment with brine before the onset of storms. These are estimated to save about seventy-five percent in total salt applied. Other options include pre-wetting salt before roadway application to reduce salt infiltration in aquifers and better stick to the road. This is also true for the calibration of equipment. Thus allowing you to measure the exact amount of material you apply, facilitating more accurate and efficient de-icing. Lastly, proper salt storage is a way to minimize salt loss and pollution.

Municipalities and privately owned facilities can protect salt investments and the environment. This is to say that they adopt storage best practices. For instance including building salt storage sites on impervious surfaces. Moreover implementing secondary containment measures; and regularly inspecting structures for breaks or tears.

An alternative de-icing option should be nontoxic and break down into benign components. This is relevant: considering propylene glycol, which is used to de-ice aircrafts. Propylene glycol is preferred for this purpose. In other words it is less toxic than ethylene glycol. The same agent that keeps car radiators from freezing up.

However, propylene glycol’s effects don’t last long. As a result they spray it rarely on roadways and surfaces. Furthermore it is still deadly to aquatic life. What about natural alternatives? Scientists have found insects and spiders in Alaska that create antifreeze proteins in their bodies. These ones could lower the freezing point of water by a few degrees.

Additionally, some fish, like the Antarctic toothfish (Dissostichus Mawsoni), create antifreeze glycoproteins. As a result they prevent the blood in their veins from freezing in the coldest waters on Earth. Antifreeze proteins had not been identified in terrestrial arthropods from the Arctic or anywhere in Alaska.

The hemolymph of seventy-five species of insects and six spiders from interior and arctic Alaska were screened for thermal hysteresis. A difference between the freezing and melting points; and a characteristic that can indicate the presence of said proteins.

Most of these arthropods freeze, avoiding, and the protein functions by binding to ice crystals to prevent their growth; while engulfed by much larger amounts of liquid water. As researchers have already acknowledged, it’s about a very complicated mechanism that could represent a valid discovery; but also a potential market opportunity for antifreeze based products that work on the same level.

Interest in agro-based alternatives has expanded, even though salt remains the active ingredient in most of these products. The reason why agricultural products are interesting is because they can lower the freezing point of chloride-based salts. They can also increase the period of time salt remains on the pavement. They can also improve sunlight absorption and reduce the corrosivity of salt solutions.

When washed into streams and lakes, many agro-based de-icers have an impact; as would be expected when any organic material (such as wastewater) is released into a body of water. In particular corn steepwater – a byproduct of wet corn milling –, cheese and pickle brine, fermentation by-products; such as beer and wine waste, and de-sugared molasses which are not corrosive. They are a by-product of other processes and generally increase the efficiency of traditional salt.

A pilot program on the use of agricultural additives

In December 2020, Michigan passed a public act stating. The State department must implement a pilot program on the use of agricultural additives; to control ice on public roads, highways, and bridges. This to review the potential efficacy and environmental impacts of agricultural additives. At the same time maintaining the safety and mobility of the motoring public. While this method has already been put to test, researchers are gathering information on whether agro-products can substitute salt.

If beet juice from sugar beet processing emerges with the best potential; as an alternative to sodium chloride. Using it as a road de-icing agent, this would technically mean trading sugar for salt. While sugar may be less toxic to aquatic life, high sugar levels can lead to other problems. Bacteria uses sugar as a food source and strips oxygen from the water. Thus leading to a process called deoxygenation, which is lethal to fish and other aquatic life. On roadways, another concern of using agricultural products is the possibility of attracting wildlife to roadways.

It is actually possible to re-create a synthetic version of these proteins in a lab. For instance starting with polyvinyl alcohol, or PVA, a water soluble synthetic polymer. This simple, inexpensive compound is safe for humans and aquatic life. That is to say it is a common ingredient in many everyday personal care products.

PVA contains the same hydroxyl groups as those discovered in fish antifreeze proteins. As a result, in the future we may be able to change PVA; from an everyday compound into an ice-fighting substance. Additionally, PVA doesn’t rapidly biodegrade. Therefore has the potential to work on surfaces that need to stay ice-free, namely roads and sidewalks. Its long chemical structure makes it suitable for shaping and adapting into non-corroding sprays or coatings.

Founded in 1972, is one of the oldest and largest not-for-profit land and watershed conservation organizations. The objective is to preserving and restoring open space; thus protecting rivers and watersheds and promoting stewardship of the environment in North-Eastern Illinois. Salt smart, save more is an initiative sponsored by DuPage County Stormwater management