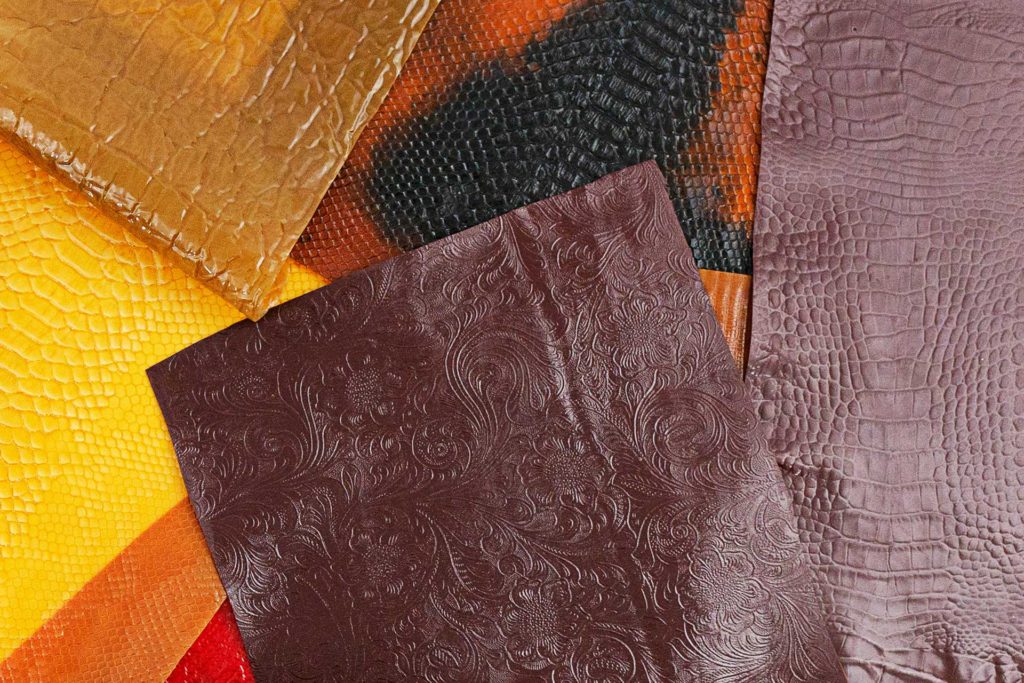 The struggle of creating an entirely new textile: leather from shell seafood by Tomtex

Most vegan leathers use different types of plastic, chemical treatments and simply do more harm than good to the environment. Alternative leathers, on the other hand, aren’t necessarily vegan yet they don’t contain animal skin. One example of this type of leather is the one Tômtex produce; a brand dedicated to creating plastic-free and biodegradable leather from shell seafood waste.

This leather-alternative material comes from chitosan a derivative of chitin. Chitin is the second most common bio-polymer in nature after cellulose. Chitin can come from sources such as the cell walls of mushrooms or the exoskeleton of crabs and shrimp shells. This particular approach takes into account waste streams. Tômtex receives the shell waste from other companies’ waste, such as their partner in Vietnam. This is a particular concept which co-founder and CSO, Ross McBee, finds interesting: «The definition of waste is odd. Waste can be something that people throw away. But it can also be something not used to its full potential. Or it can be something displaced where it’s waste to us, but something else somewhere else». Shrimp shell waste is a version of this where people don’t really think about what happens to it.

In the production, there is the extration of the chitosan from the chitin using green chemistry. The chitosan is the main component. «The goal is to have the bulk component from waste», explains McBee.

After the extraction of the chitosan, they dissolve it in an acidic solution with other additives to change the properties of the material. It turns into a pourable liquid transferred into a mould and colored. There is then the addition of a faux-leather pattern to resemble its properties.

Once the water from the liquid evaporates, there is a thick film of material. This is then de-moulded for the surface that will undergo treatment for water resistance. «The overall process is pretty benign and simple», says McBee. With regards to the coloring, they can use mineral pigments. In general, the pigments would need to be small enough so that they don’t drop to the bottom and can mix well with the liquid. However, this does give the opportunity to create a natural gradient, where it is one color on one side and another color on the other side.

What to watch out for

Although the overall production process seems innocent enough, McBee does admit that there are many ways in which this could become unsustainable very fast. «This could be a gnarly thing if you’re not careful about where you source chitosan from», he says. One example is regarding the sourcing of the shrimp. It can come from illegal farming activities, where the shells are not a waste anymore, but intentionally sourced for chitin, missing the whole point in the first place. McBee: «When you buy things you really should know what’s in it and you should know where it comes from».

Tômtex used a beeswax layer to coat the surface of the leather for the water-proofing, however, according to McBee, that is «subject to revision». Regarding the other methods to use, there are numerous exploratory fields. It could consist of coming up with something regarding structural water repellent.

Plants’ coating collect water when they get wet. McBee describes this as «the way nature does it». When it comes to giving alternative leather the feel and texture of animal-derived leather, it is about how people perceive it. «Part of the appeal of leather is that it is this rich, warm, soft and insulating material. It can be hard to mimic», describes McBee. Regarding the tensile strength, it is at parity with leather, and could be better than vinyl.

What may raise questions is the smell of the final material. After all, it is a derivative of shrimp shells. However, McBee assures it doesn’t smell fishy. Rather it smells sweet. It tastes sweet as well, he adds as he takes a nibble from the material. «You could eat it because chitosan counts as a cellulose fiber. But I don’t recommend it». Although this particular leather isn’t vegan because the bulk component comes from animals, the final product is sustainable and circular at the forefront.

To mimic or not to mimic? That is the question

Bringing materials from the lab to the market is an obstacle which many developers face. It is «easy to make novelties», says McBee. The hard task is penetrating the market. Their goal with this is to get it to the point where it becomes a realistic material to use in fashion houses. «Do you always want to play the mimicry game or do you want to show off what this leather can’t?». The first market to consider replacing is luxury exotic leathers. This primarily means replacing the tactile qualities.

However, according to McBee it isn’t the only thing that this alternative leather can do. «Its quite clear from the chemistry and experimentation we’ve done that we can do a lot of different things with it. We would love to move into a space where we’re not just a different version of leather, but we’re an entirely new class of textile». Just like with what happened to fur, leather has become a social taboo. Creating a material, in which its primary goal is to resemble animal skin, is appreciating its qualities. It is a future in which you lean fully into the idea where you don’t necessarily get over leather, but you use it for what it is good for and treat it with a great deal of respect.

The dilemma of biodegradability

Greenwashing is a frequent issue society has to face. Many think that just because something is vegan, it is automatically the better option. This is not so true if we were to talk about the environment. Most vegan leathers are just plastic. «They have a lot of interesting properties but they have a lot of interesting problems that go with it», explains McBee. This is what gives this particular industry a lot of opportunity to take advantage of play-on words and keywords which misinform the public. The majority of traditional vegan leathers are not biodegradable or compostable because there is plastic. However, McBee adds that even real leather isn’t fully biodegradable.

In the brand’s case, «the goal is not just for this leather to be biodegradable, but to be biodegradable somewhere other than in an industrial composting setting». This would mean that nature has the upper hand in the compost, using micro-organisms rather than man-made energy. The goal is to be able to put it into a garden where it can become food for something else. The concept of biodegradability in products can go much deeper. As McBee explains, there are two ways which one could approach this problem. Either it relates to producing something which is not biodegradable and very resistant so that people can keep and cherish it for much longer. The second approach is creating something which is extremely biodegradable, and fits into the concept of circularity a lot more. This would mean having the opportunity to continuously change the product as one wishes.

The latter approach may seem like a reasonable solution in a world where society over-consumes. However, it may translate into one of the biggest problems we are currently facing.

«It can be placed as fast fashion because it will be thrown away and replaced», says McBee. Therefore, the issue is creating  something that, until you want it to degrade, is very resistant, but then can vanish when you want it to.

«The challenge is trying to find a way to not over-protect something», McBee explains. He goes on to describe an imaginary recycling system, made purposefully for this type of material. Therefore, creating materials which fit into a circular economy is not enough. There is a need to think of a setting for the end-of-life stage, otherwise, the same problems which we face as a society today will continue to get in the way.

A company that creates bio-based material from shell seafood waste. It is 100% biodegradable and gives value to resources which people would otherwise forget. They want to replace vegan and authentic leather with something more circular and plastic-free.