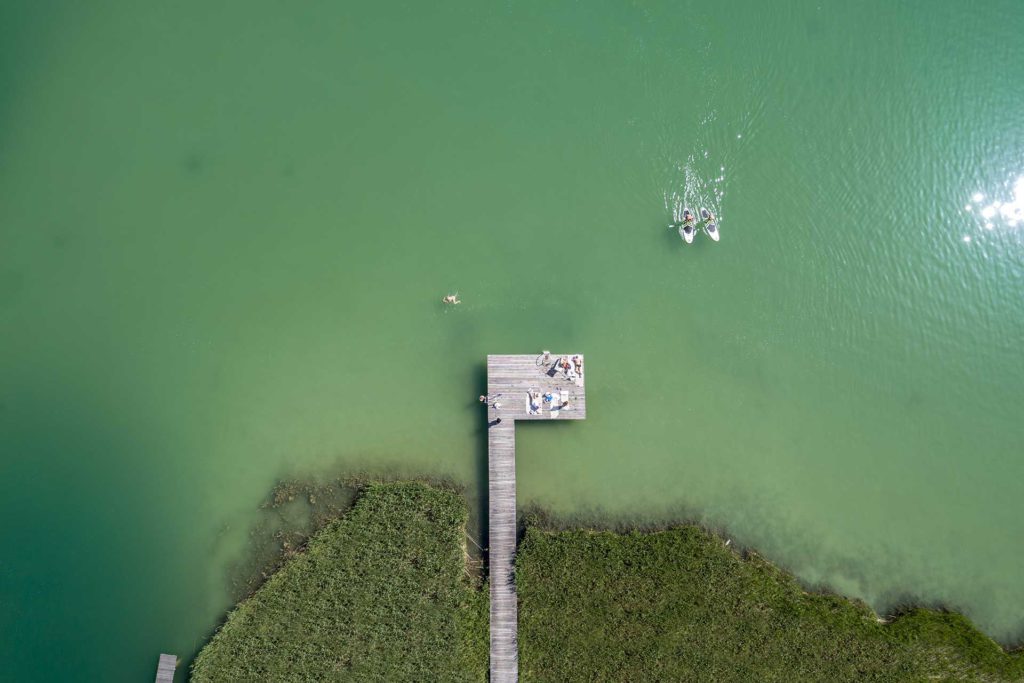 Seehotel Ambach owes its atmosphere to South Tyrolean modern architect Othmar Barth, who designed it in the seventies. Not only did he have the trust of the Ambach-Maran family of hoteliers, but he was also a family friend. Shortly after designing the restaurant and swimming facilities at the family’s «Gretl am See», Anna Ambach invited him to work on the northeastern shore of the lake.

Barth spent three years here on the design of the Seehotel Ambach. The present owner’s aunt granted that nothing could be touched without Barth’s authorization. The architect took pride in this project and would often spend his holidays here, not far from his home in Brixen.

In 1973, Anna Ambach inaugurated her Seehotel. For forty years, no changes took place, and the building remained in its original state. In 2014, Anna Ambach bequeathed this family jewel to her nephew Klaus Maran, who now runs it with his wife Manuela. Both appreciate Othmar Barth’s work and wish to preserve far more than just the spirit of the building. They look to enrich it even further. The heirs have begun a program of restoration, to adapt the structure to today’s canons of luxury. Walter Angonese is in charge of this labour of love. The architect aims at ensuring that interventions flow in continuity with the past.

For the initial renovation, the Maran family cleared out the hotel and improved the lighting sources. Next, the technical equipment was renewed and the bathrooms renovated for the sake of elegance. Carpets, fabric and upholstery were all replaced. While maintaining the seventies colors, design accessories were added, including armchairs and reading corners, which create a sense of liveability. In doing so, Angonese has revived the spirit of the Seehotel Ambach, in a way Barth would have appreciated.

With its rushes and willows, the protected natural area on the northeastern shore of Lake Caldaro is a wetland biotope, bordered by a meadow with a scattering of fruit trees. The realm of nature touches whoever passes time here. The jetty used for swimming in the lake nudges through the rushes, intimating the closeness between man and nature here. The lake, remains a key natural habitat for birds and amphibians. Even migratory birds stop to take advantage of the marshlands, peat bogs and waterfalls while they rest here on their travels. This is why there is a sanctuary area, with rushes for environmental protection around the woodland and brushwood.

The project of Seehotel Ambach of  architect Walter Angonese

There are opportunities to observe this biodiverse heritage. A stroll around the lake takes less than two hours. Designed to be a living organism, the hotel remains in dialogue with the lake and its seasonal changes, especially through the neighboring park. At eleven thousand square meters, the park is full of grasslands, willows, and birches, bordered by a meadow scattered with fruit trees. In the richness of the Mediterranean flora, weeping willows impose their might.

When entering this place of rest, you discover a lawn for sunbathing, the Badehaus with infinity pool, and the lake with its boats. Behind the lake rises the Mendola. A South Tyrolean rural landscape completes the scene, its vine-covered hills unfolding behind the hotel. This is the land of vineyards and wineries. Does it take more courage to preserve or to replace? What should be preserved? Questions like these also arise in our relationship with nature. To this end, in 2020 the apple orchard became an extension of the biotope park with fruit trees, berries, and herbs.

The Badehaus in particular appears to swim in the biotope, giving the illusion of a boat reaching the lake shore. The two-hundred and fifty square meter spa with loggia unfolds to the rear of the park, extending to the orchard. Its three wings reach in three directions: the hotel, the lake and the Mendel Pass.

For construction materials, apart from the glass facades, a more transient equivalent of the concrete from the hotel building is used: wood. This is a tribute to Barth, a carpenter’s son. The wood was selected with care, then sanded and oiled to resemble the finished timber used in shipbuilding. The starkness of the Badehaus contrast the Seehotel’s whiteness. As the project architect Walter Angonese explains, «in this way, the Badehaus is also in indirect dialogue with Barth’s structure, appearing as the hotel’s shadow».

The Finnish sauna symbolises the Nordic health culture, while the steam bath epitomises the southern. In between, there is the patio with whirlpool and a Rain Room in place of traditional showers. This not only commands the location, but it also opens up a range of sensory dimensions.

Paying homage to the Mediterranean loggia, the covered terrace extends far into the park, where the shaded areas intersperse the meadow. Embedded in the garden is the heated swimming pool, which connects all the elements with the hotel building and represents an alternative to diving into the lake waters.

From an internal perspective, during the project phase, architect Othmar Barth had made inspections and studies of the area in its every detail. He had looked to the language of the early seventies, choosing geometric lines and shapes. For example, the open staircase is a continuation of the landscape in which it sits.

Not everyone likes Barth’s language. At first, people derided and compared the hotel to a beached ship. Over time they rediscovered it. Especially architecture lovers from all over Europe who recognized the value of the Gesamtkunstwerk or «total artwork».

The interior design of Seehotel Ambach

Curves and rectangles characterize the interior. Here the world of water and rivers, the landscapes with trees and the vineyards all meet to form an abstraction of forms and colours. The exterior has been transferred to the interior of the hotel. It was Barth himself who designed the hotel furniture, then commissioning their production to local craftspeople. For the lamps, armchairs and other pieces, Barth selected from the work of the Italian School of Design. Unique pieces were provided by designers such as Vico Magistretti, Achille Castiglioni and Emma Gismondi Schweinberger.

The Maran family has indeed researched the original colours and materials to make sure the restoration respected Barth’s work wherever possible. Where this was not possible, they acquired contemporary pieces suitable for their style. For furniture, they added particularly armchairs, chairs and lamps, contemporary Italian design pieces by Gervasoni, Moroso and Artemide.

The quest for harmony is perceivable, whether in the common areas, the nooks and corners to hideaway in, or the rooms and suites. The surfaces, colours, outlines, materials, proportions, the light: everything has been attended to, down to the details. Nevertheless, it appears completely natural. That which nature produces for itself outside, quality design produces inside.

The region of South Tyrol

With its diversity and position, encased by the UNESCO-awarded beauty of the Dolomites, South Tyrol crosses borders with the contrast between Alpine peaks and Mediterranean vineyards. The growing of South Tyrolean specialities like apples, wine and smoked ham takes place here. These high-quality products result from the mild climate, with over three hundred days of sunshine per year, and from the work of local farmers, with years of experience at their disposal.

In South Tyrol, the Italian, German and Ladin languages meet. In the mixture of southern ease and rural sense of tradition, a sense of innovation and design finds its roots. The influences of true South Tyrolean personalities and luminaries have combined to mold this province.

The Seehotel Ambach Restaurant pays tribute to the proximity to the lake. The restaurant also seems to extend into the waterscape itself. Via the outer staircases, the wooden decks of the terraces project out towards the lake. Othmar Barth’s vision was thought out with care. The house kitchen reflects the simplicity and allure of the architecture and lake panorama.

The garden harvest mixes with the flavors which define both Mediterranean and fine Alpine cuisine. Sorrel, rose blossom, even the reeds. Everything has its place, whether in the dining room, on the lakeside terrace, or on the plate. Gourmet chef Albin Widmann and his team combine the lightness of ingredients from Southern Italy, with traditional South Tyrolean recipes. As a culinary artist, Chef Widmann ensures each guest is just as inspired by the colors and intensity of his compositions, as by the lake panorama itself.

The clientele at the hotel is various. The older generation are regular guests who have remained loyal to the hotel and have already recognised and appreciated the special features (architecture and nature) in their younger years. In recent years, the hotel has also been able to draw the attention of a younger audience, mainly through hotel portals and collections, and social media. The range of activities and areas appeals to guests of different age groups. While the style of the seventies brings up memories in the older generation, it has made a comeback in style for the younger. Whether you belong to the former or latter, Seehotel Ambach is worth a visit.

Campi al Lago, 3, 39052 Caldaro sulla Strada del Vino Seehotel Ambach is a four-star hotel in the region of South Tyrol. Designed to be a living organism, the hotel remains in dialogue with Lake Caldaro and its seasonal changes, especially through the neighboring park.