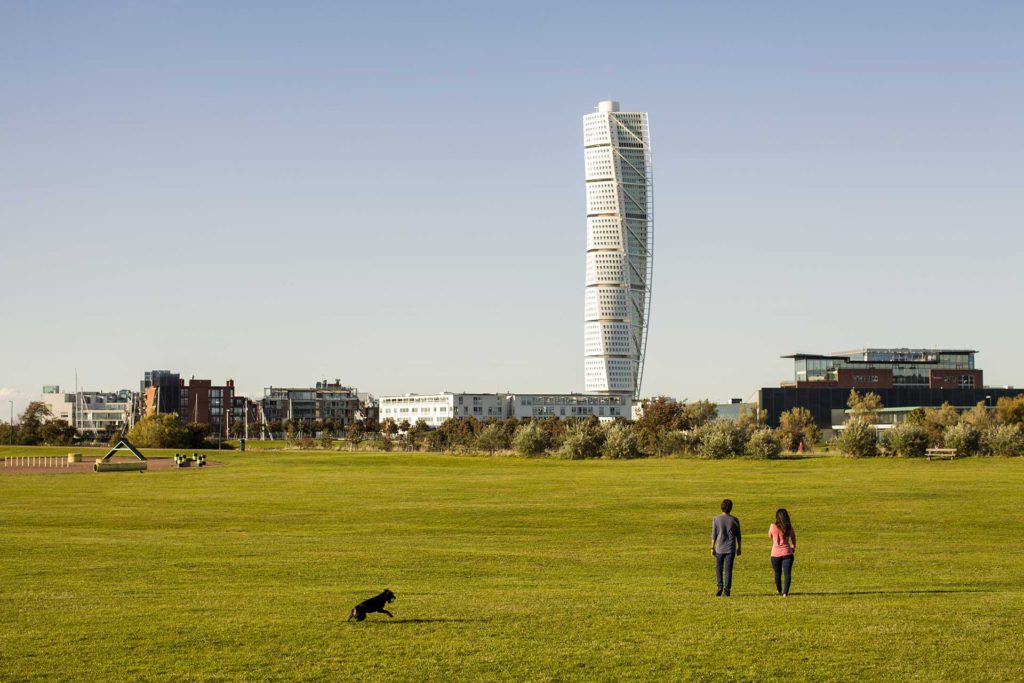 Designed in 2001 as part of the European Housing Expo in which the Municipality of Malmö, Sweden, was chosen to participate, Bo01, also known as the ’City of Tomorrow’, is the first neighborhood in the world designed with 100% of its energy sourced from renewable sources. After the Expo, the city has continued to pursue renewable energy production and low emissions programs. Bo01 whose name stems from the Swedish verb ‘Bo’ meaning ‘to dwell’, and 01, short for 2001, was designed by Klas Tham and created to repurpose the Western Harbor, which was historically industrial.

After suffering from the 1970s economic recession, the area experienced a series of venture and industrial attempts, and was abandoned at the end of the last century. Sweden took the 2001 expo as an opportunity to rethink sustainability in housing and the whole city of Malmö is now following Bo01’s steps. When it was completed in 2010, Bo01 was entirely powered by local production, according to Simon Chrisander, deputy mayor responsible for environmental issues in Malmö, with as main sources of energy windmills and solar panels.

During the past few years, and in particular 2020, «the energy demand went up». The lockdowns imposed by the government due to Covid-19 and the increased smartworking combined to distant learning, impacted that too. The district became more and more popular and as a consequence «they started building more». The whole district goal is to «have very low energy consumption», and although «energy targets have not been reached in all households», says Chrisander, «the plan has been successful».

Burning waste to produce energy – known as pyrolysis – was recently added to the picture, becoming a further development. There are «food grinders installed in some of the buildings», and systems that allow «to create biogas from grinded waste and use it for electricity and heating». Extracting «energy from waste was pioneering at the time when it started in Bo01 and this has impacted the city’s tendency of going forward». More than sixty percent of the whole energy used in Malmö is now produced from waste pyrolysis. The demand is so high and systems to produce it are so efficient that they «also import plastic from other countries that are not as efficient in burning it».

Pyrolysis, especially when it comes to plastic materials, has also its disadvantages: «it lets out a large amount of emission». The process of pyrolysis consists in heating up plastic inside a special reactor up to 450 Celsius degrees in the absence of oxygen. At that temperature, plastic decomposes in hydrocarbon fumes which are then condensed and transformed into liquid form. In order to start heating the material, a quantity of fuel is needed, either GPL or methane. An emission is necessarily implied. For one ton of plastic around 345 kg of Co2 is produced. «That’s why we’re looking at carbon capture on the plant where we work with pyrolysis», explains Chrisander.

Despite the amount of solutions to compensate the emissions produced, it is essential for the compensation has to happen in the same area where the Co2 is released for the math to be right and the implant to be carbon neutral. There is another issue concerning energy consumption in Malmö which is making life hard for the Municipality. «Bringing in energy from other places» is becoming a problem: «a large amount of renewable energy is produced in the north but it’s not managing to make its way down here because the cable that should transport it is not thick enough». Malmö used to import energy, when needed, from a nuclear plant about twenty minutes outside the city, but the reactors were shut down in 1999 and 2005 «due to the environmental aspect».

According to Chrisander, they «are forced to import some of the dirty energy from other places». In order to fix this, Malmö administration is now looking into geothermal energy production, mainly with German E.ON company. E.ON produces geothermal energy by digging up to seven thousand meters into the ground; they then send cold water down in a pipe, where it gets headed «up to 130 Celsius degrees». The water then is pushed back up in a different pipe and «sent directly into the heating system of the city». If successful, this project could put the city in a position to «replace up to fifty percent of the energy production for heating».

The option to increase energy production via solar panels

In a report that is due to come out in April 2021 on sustainability, which will present the goal of switching to a hundred percent renewable energy by 2030, solar power is given a central role. «Fifteen percent of the energy should be coming from solar power according to the program but at the moment we’re at around three». Steps forward need to be made. To get there, Malmö is working on setting up deals with private owned companies and regional local businesses: «the idea is that we will cover their roofs with solar panels as long as they commit to buy that solar energy».

Both this and geothermal production are high standards in terms of needed permits though. Formal approvals and regulations seem to have been an issue in more than one instance in this field. «Because of EU regulations», explains Chrisander, «we have to export some of the energy», for example «down to Germany and they can export back to us». There have been cases when «we’ve actually exported some energy when we needed it ourselves».

Just to buy it again, back from the same countries they had exported it too. The possibility of building some new windmills between Malmö and Copenhagen is also being considered. What remains a problem are «cold still days» when the wind is not blowing, which are «rough» in terms of meeting the energy demand. Due to these reasons, energy also tends to be more expensive in the south of the country, where Malmö is located. «Electricity prices here are higher than they are closer to the sources up in the north», making the overall living cost higher.

The issue of segregation in Malmö

This is one of the reasons behind the «partial segregation» that Malmö is experiencing. Since the Øresund Bridge inauguration in 2000, the social landscape of the city has changed. On one hand, more people started to move to Malmö for work and the popularity of Bo01 also attracted more residents due to the promise of a more sustainable way of living. More construction was suddenly needed to provide new residencies; this need was met by quickly building identical houses, which ended up creating segregated neighborhoods where people didn’t always and necessarily have the time and the chance to adapt to fit in.

To overcome the issue of segregation, Malmö administration is counting especially on architecture and the variety it can offer. With different kinds of building and mixing up rentals and purchases, they are also aiming at mixing up the demographic. They are working with foreign investors. «With some neighborhoods becoming more popular and desirable places to live in, we are attracting more investors from outside», so they came out with a way to make this an opportunity both ways: «when they come to us with a project for a certain district, we also ask them to develop another one in some other part of the city».

Although the city of Malmö and the nation of Sweden are famous for implementing solutions and pioneering technologies for sustainability, sometimes the best way to truly get green, turning away from empty greenwashing, is to look into simple things. This is why Chrisander is promoting an initiative to improve the use of bicycles and developing new pathways to let people walk through the whole city. He is planning to make a deal with an electric bike company that still needs to be identified so as to allow people to lease the vehicles directly from the city at convenient rates. In Bo01 there is also a plan to build a new bridge entirely for bicycles and pedestrians.

A neighborhood in the southern city of Malmö, Sweden known for its sustainable development and design. Bo01 began as part of the European Housing Exposition in 2001 and served as a prototype to help later design Västra hamnen. Today, Bo01 is known for its holistic approach to incorporate sustainable design into high-quality living and serves as one of the first Swedish models for sustainable urban planning.

Designed by an urban designer, Klas Tham, Bo01 is the first neighborhood in the world to declare that 100% of its energy is sourced entirely from renewable sources.The name Bo01 stems from the Swedish verb ‘Bo’ meaning ‘to dwell’, and 01, short for 2001. The most notable building built for Bo01 was the Turning Torso skyscraper, which became the tallest residential building in Scandinavia. It was however not completed in time for the start of the housing exposition, and was completed later in 2005