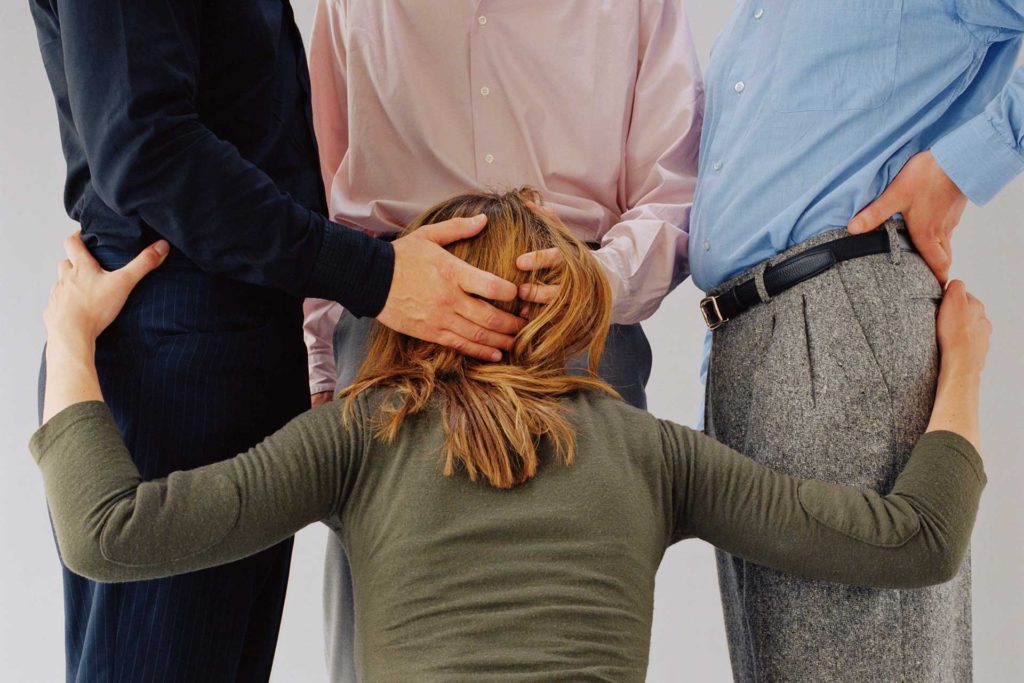 Édouard Levé: What is Pornographie (2002)? Art, wisdom, and realization: no hypothesis

Édouard Levé through images: the embrace of one’s sensuality, sexuality, and individuality that feign disinterest to the prohibition sexual pleasure, arousal, and thoughts invoked

A velvet red couch hosts and participates in an office play. The cast comprises four employees: two men in their blue pants and light suits, two women in tight outfits – one in black and one in red. The play begins—the lady in red hops on the sofa and plants her knees and palms on the surface. The first man closes in on the lady’s mouth, feeding her his crotch, and the second man kneels behind the lady, impaling her from behind with his groin. The lady in black stands behind the sofa and eyes the scene below her, learning the ropes of the office sex. As the play proceeds, she dives in to join, falls in her knees on the floor, and laps up the vulva of the lady in red whose lips are sucking the groin of the first man standing on the sofa, epitomizing the clothed pornography series of Édouard Levé.

Titled Pornographie (2002), the compendium explores intimacy by refraining skin exposure, employing office sex, and ushering in a question to the depth of one’s identity, a recurring theme in the works of the French author and photographer. Growing up in Neuilly-sur-Seine in the Western part of Paris, Levé, born on the New Year’s Day of 1965, had earned his degree in business and worked in the corporate field before he transitioned to art in 1991. The first art practice he employed exuded the nuance of abstractionism, and he sojourned all the artworks he accumulated during this period in his atelier in Paris. After a while, he journeyed to India for several months, and once back to Paris, he burned down most of the artworks he had painted as he shifted towards photography.

To mark his entrance as a conceptual photographer, Levé produced Homonyms (1996-1999), an anthology of portraits of anonymous people he had contacted and who shared the names of Levé’s revered figures such as Yves Klein, André Breton, and Georges Bataille. As part of the compendium’s description, the French author and photographer explained that he had found these names in a phone directory and gave their phone numbers a ring. He printed the images in color, enclosed them in a metal frame, and indicated their first and last names below the imagery to echo people’s portraits. Here, Levé commenced his search for the contradictions and fictions of identity: the face of a famous versus a foreigner bearing the name of a well-known figure.

Fast forward to 2002, Levé churned out two publications in two genres: one for literature, one for photography, but both embrace an aura far from what he had produced in Homonyms. The former, named Oeuvres, signaled his debut anthology of a cross between poetry and a journal of thoughts. It echoed a catalog of 533 conceptual projects that the French author and photographer had in mind, some of the texts chancing upon their fruition later on.

From the excerpts provided by The White Review, L’s mind ran at a horse speed, taking no breaks at the heed of his lightning thoughts. Levé went from «A book describes works that the author has conceived but not brought into being,» and «The world is drawn from memory. There are missing countries, altered borders,» to «An exhibit displays pieces unalike in spirit, style, and technique, but with the same origin: their author saw them while dreaming,» and «Entomological boxes contain invitation cards to exhibitions that didn’t take place. The reasons for their cancellation are written below the cards. The boxes are hung on the walls like a collection of insects.»

In the same year, Levé released Pornographie, the underlying intention to arouse the viewers while they seek their identity and self-contradictions overflowing. The eroticism present in the anthology of pornographic pictures toys with the idea that pleasure rivets through the viewers even when the bodies of the subjects barely show their skin. The arousal that may peak from rifling through Levé’s images may affirm the research of Beáta Bőthe, István Tóth-Király, Nóra Bella, Marc N. Potenza, Zsolt Demetrovics, and Gábor Orosz, where they attempted to understand why people watch pornography. The researchers uncovered that sexual comes forward as the primary reason.

In an article on this subject, as obstetrician and gynecologist Nivin C.S. Todd reviewed, four phases correspond to the sexual response cycle that one may feel from Levé’s photobook. The excitement phase comes first, which can last for a few minutes to several hours. In this period, muscle tension heightens; the heart rate picks up its pace; the breathing races; the skin may become flushed to the extent that patches of redness may visit the chest and back; the nipples erect; the blood flow to the genitals until the woman’s clitoris and labia minora – or the inner lips of the vagina – and the man’s penis swells; the woman’s vagina excretes lubrication and breasts become fuller; the man’s scrotum tightens and secretes lubricating liquid.

As the edge to orgasm build, phase two enters named plateau. Here, the changes in the first phase intensify; the vagina continues to swell, and the clitoris becomes highly sensitive; the man’s testicles tighten; the breathing, heart rate, and blood pressure skyrocket; and muscle tension increases. As the orgasm steps in, the third phase that may only last for a few seconds, the involuntary muscle contractions occur; the individuals gasp for breath as the blood pressure, heart rate, and breathing rate convulses; in women, the vagina’s muscles clench; in men, the base of the penis’ muscles contract resulting to the ejaculation of semen; and sex flush may dot the body’s skin. As one comes down from the high, they glide through the last phase, the resolution, where the body functions back to its normal state, and the swelling in the body parts and the rapid pace of beats and breathing return to normal. From here, the sense of well-being, intimacy, and fatigue meet.

Skimming through the photographs, a woman kneels before three men, all of them in their smart, office attire. As the three men form a triangle, the woman grabs the buttocks of the men in her left and right while the man in the center, dressed in a pastel pink shirt, fists his hand in her hair and nudges her towards his groin. The same man in a pastel pink shirt appears in another photo, but with a different group. Here, he savors the clitoris of the woman on the office table whose attention sways to the man in a white shirt as they kiss. As this new man enjoys the kiss, he appears oblivious to the woman kneeling before him, working him and his shaft up.

While describing these images may awaken the viewers’ pleasure, others may undergo a lash of guilt and shame as the idea of arousal and sex may still be frowned upon. Touching on the latter, sex may still be taboo in cultures, and details and perspectives from social sciences and the effects of sexual thoughts contribute to this hindrance. In a column of Dong Burgundy on this subject, he quotes Pulitzer Prize-winning writer and anthropologist Ernest Becker and his studies about sex being taboo and reveals that a reason behind it relates to a person’s fear of death. «After unpacking Becker’s theory, we can start to see how it might make sense. Humans are constantly concerned with mortality and death, so we develop coping mechanisms by thinking of ourselves, not as earthly, mortal beings, but as immortal, spiritual beings – a belief in some form of afterlife. But engaging in earthly, animalistic behaviors such as sex reminds us that we’re just bags of chemicals doomed to decompose when our time on earth expires,» Burgundy writes.

The author continues by referencing the research of Jaime Goldenberg, a professor of psychology at the University of Southern Florida, where his team framed sex as driven by love and intimacy. As a result, participants’ thoughts about sex being related to death dissipated, replaced by the mindset of sex as an act of passion rather the carnality. «Perhaps by placing the act of sex in a uniquely human, spiritual perspective, our natural fear of mortality is erased. In other words, we may finally have found definitive evidence that love conquers death,» Burgundy concludes.

Levé’s Pornographie may as well be revered as a discreet Kama Sutra – a historical Indian book that discusses courtship, marriage, and lovemaking, referenced for its sexual positions – but in his compendium, the French author and photographer exude grit and timelessness in the quality and styles of the images. The embrace of one’s sensuality, sexuality, and individuality that feign disinterest to the prohibition sexual pleasure, arousal, and thoughts invoke.

Riveting back to the filament between sex and death and how they concern Levé’s biography: while an air of privacy may surround these two, death piques more interest, which, as aftermath, may underscore the penultimate works of art the person has left for the living to consume. «You are like the actor who, at the end of the play, with a final word, reveals that he is a different character than the one he appeared to be playing,» the French author and photographer writes in his last publication, Suicide. This novel instigated Levé to leave a letter expressing his final wish to publish his book before hanging himself in his apartment in Paris.

The body of works he left serves not as souvenirs of who he was as an author and a photographer but as tokens of art that remind viewers and readers of the philosophy, politics, and psychology of identity and intimacy. In his way, Édouard Levé gifts his readers and viewers artifacts of wisdom and art. «Your life was a hypothesis. Those who die old are made of the past. Thinking of them, one thinks of what they have done. Thinking of you, one thinks of what you could have become. You were, and you will remain, made up of possibilities.»

French writer, artist, and photographer. He was the author of four books of writing-“Oeuvres”, “Journal”, “Autoportrait”, and “Suicide”, and three books of photographs. “Suicide”, published in 2008, was his final book.