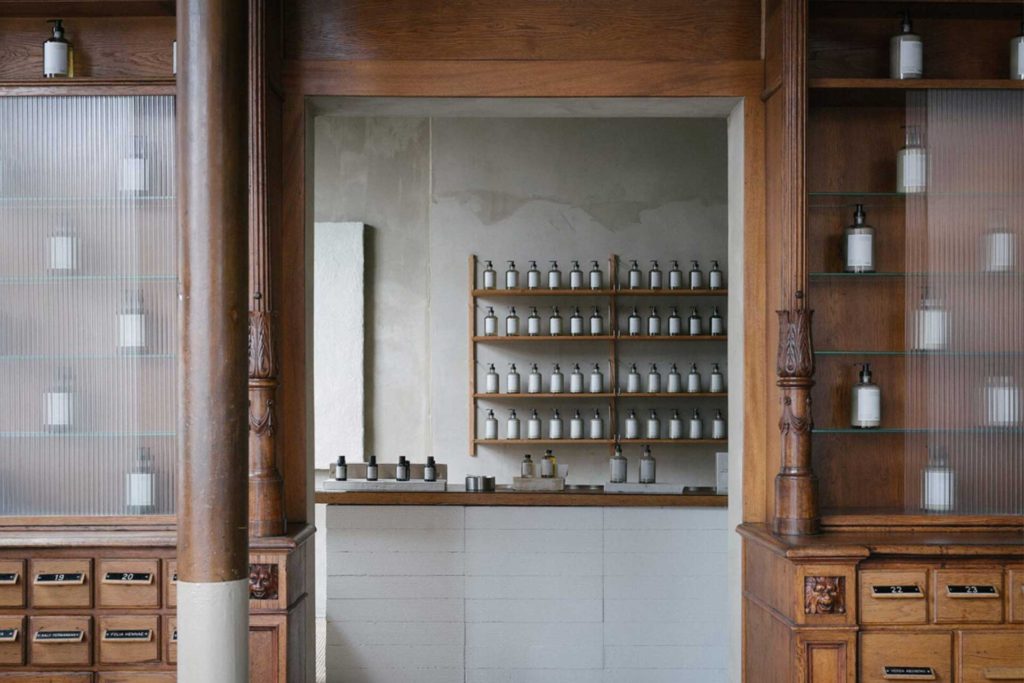 Apotek 57, Copenhagen. No room for chemical-ridden produce in the kitchen

«It is difficult to buy something that is not organic in Copenhagen», states Chiara Barla founder of the eatery located in a Seventeenth-century pharmacy. Milk, yogurt, and eggs are sourced from Søtofte Farm

Apotek 57 was opened by Chiara Barla in Copenhagen. Her own eatery was not on her cards, until her path crossed with Niels Strøyer Christophersen, of FRAMA Studio. The two met at a pop-up event and had an instant connection. «During the dinner, I sat next to this couple and we spoke and shared ideas, only to discover later that he was the founder of the store». It was this encounter, infused with wine and good food, that transpired the birth of Apotek 57, Copenhagen.

After a series of brainstorming sessions, Apotek 57, FRAMA’s eatery with Chiara Barla, launched in 2020. «Niels always had the vision for an eatery in the studio space. Our energies aligned as soon as we met – I happened to be at the right place at the right time». The project works commenced in April and culminated in October. Positioned as an inclusive gathering place – Apotek 57, Copenhagen attracts the local community and design enthusiasts from around the world. An extension of FRAMA – a multi-disciplinary design brand – convivial meals and shared experiences are a part of the studio’s philosophy of holistic living. The seasonally rotating menu, curated by Barla, features daily house-made bakes, savories, and beverages. The eatery invites you to experience the studio’s aesthetic tangibly. Aromas of freshly baked goods and house-made marmalade lingers in the air, as you sip on your cup of third-wave pour-over. Italian banter demonstrated by the hosts Barla and Lola Zlokapa beguiles the bypassers. Located adjacent to the studio store, on a quiet street in the Fredericiagade neighborhood, Apotek is nestled in a historical pharmacy dating back to the seventeenth century.

Barla was raised in an environment stimulated with olive trees, and the scent of citrus in the breeze. «I grew up in a small city – Imperia in Liguria, Italy. My grandparents had big gardens with olive trees, and I was always surrounded by good food as many Italians are». However, gastronomy wasn’t Barla’s first career choice. After studying Italian literature and art history she went on to pursue her master’s in digital communications in Milan. After working as a social media and digital PR manager for a luxury brand, she soon realized that this wasn’t her cup of tea. I was displeased to see the disconnection between what I was doing and what came out of it. The job itself was great but it wasn’t for me. At this point, her interest gravitated towards gastronomy, and she applied for a one-year stint at Elle Brusca, a farm-to-table restaurant in Milan.

After finding her groove in the kitchen – mesmerized by the thriving culinary scene – Barla took off for Copenhagen. «At that time everyone was talking about the new Scandinavian kitchen and of course Rene Rendzepie. I quit my job in Milan and moved here for three months». Three months turned into three years working with the likes of 108 and Mirabelle in the Danish capital. «The kitchen culture here is on another level. Chefs are so inclusive and open to teaching. My journey here wasn’t over after just three months». After honing her expertise Barla has now dedicated herself to opening her eatery, Apotek 57, Copenhagen.

Barla’s approach to making food is guided by her background in art history. Through her cooking style, she endeavors to tantalize all the senses. «I like working with herbs and flowers as it brings an extra layer to the dish. The herbs work with the smell and the flowers work with the sight. It is wonderful when a plate covers everything. It is pleasant to see, nice to smell and flavorsome to taste».

Barla’s creations weave together her Italian childhood memories with Scandanavian treasures. For one of the signature brioche fillings, she infuses lemon cream with pine oil. Unlike in Italy, Denmark has a long-standing tradition of foraging pine shoots. «I infused the tender shoots in oil and then added to the lemon filling. The pairing of lemon and pine oil gave the filling a distinct layer of citrus, making it very lemony». The art of fermentation and foraging off-the-radar ingredients is deep-rooted in the Scandinavian kitchen culture. «The climate in Scandinavia doesn’t offer the luxury to grow many ingredients, therefore chefs here have learned to be hyper-creative with what is available», explains Barla.

There is no room for chemical-ridden produce in Barla’s kitchen. The eatery runs on a farm-to-table model. It has tied up with farms across the city to procure their produce. «Everything we buy is organic. There is a huge organic food culture in Copenhagen – it is rather difficult to buy something that is not organic here. Milk, yogurt, and eggs are sourced from Søtofte Farm. «It is run by a young couple and they practice regenerative agriculture with cows and chickens».

At the onset, Barla helmed Apotek’s operations alone. Later she got on board Lola Zlokapa, an Italian chef from Trieste, to assist her in the kitchen. Hospitality for the thirty-four-year-old is not just about serving good food, but also about creating the feeling of home. «Lola is the best thing that happened to me at Apotek – bringing in a wave of energy that is unparalleled». Barla is currently looking to expand her operations, and consequently the team. «Now we also have Mathilde from Portugal who recently joined us in the pastry section».

Housed in the preserved St. Paul’s Apotek, established in 1878, the space showcases the juxtaposition of the old and the new. FRAMA, the mother brand, orchestrated the interior design and architecture. The different spatial elements harmoniously integrate delineating a fluid space bathed in natural light. The walls are finished in a custom bone-white chalk paint created by Jotun, a Norwegian paint company. Featuring an assortment of design pieces, Apotek interiors are adorned with Frama products. Including the studio’s lighting, dining tables and chairs, kitchen furniture, tableware, glassware, and cutlery. The food preparation and serving area have Frama shelving and units from the Tea Kitchen range. Being Frama’s eatery – all the design elements become a part of the culinary experience. «Not just the ingredients but also the ceramics and the cutlery are part of the food I serve. Otto ceramics from Frama represent a solid blank canvas that can be filled with colors and textures».

The pharmacy’s interiors dating back to 1988 were reinterpreted through a contemporary approach. Some of the vintage elements – original ornamental wooden paneling, old bookcases, wooden cabinetry – have been retained as a part of the decor. «It was an old pharmacy with different rooms – one room for the doctor, one where they stored all the chemicals. In the basement they were producing the pills – there is still a table there where they used to roll the pills. The eatery is located in the room where the doctor would attend to the patients», Barla tells. Apotek can accommodate up to twenty-five people along with an alfresco space with six tables.

The Apotek grocery line was launched in the throes of the coronavirus second wave. «We always had the idea to launch a grocery line with Neils – so people could take a piece of Apotek home. I started making jams and marmalades during the lockdown. When we finally opened, people flocked outside to buy the preserves».

With an expansion in mind – the brand has now ventured into olive oil and red wine. The development of their grocery line, explains Barla, is the fruit of a collaboration with her family in Italy, exhibiting a transparent and closed-loop supply chain. «My ancestors have been producing wine for generations. My father is continuing the tradition». Apotek’s vino Rosso is made from Dolcetto grapes, harvested in 2020 in Alba, Piedmonte. Pressed, fermented, and bottled in Cesio, Liguria. «We produced 500 bottles of unfiltered ruby-red wine with red berry notes». Their extra virgin olive oil is made using the Taggiasca cultivar, harvest, and cold-pressed also in Liguria. The line was received well by the clients and will remain a part of their menu. «Last week we got an order of 200 bottles of olive oil», says Barla.

Barla is currently preparing to host monthly pop-up dinners at the space – adding another layer to the Apotek experience. «The idea is to curate small intimate gatherings for ten people or so with good food and wine. We are launching the dinner series in November and are quite excited about it».

Founded in 2011 by Niels Strøyer Christophersen, Frama is a multi-disciplinary design brand. It creates objects that inspire the senses and encourage mindful living. Emphasizing natural materials and simple geometries Frama’s work connects the imaginative with the practical. It has embraced a collaborative approach to design that is inspired by the old and the new, digital technologies, and analog traditions. Exhibiting minimal home aesthetics and spatial design, FRAMA’s home decor capsules range from furniture, lighting, kitchen, accessories, apothecary, and more. Their studio space is characterized by abundance of daylight, natural materials and clean lines.