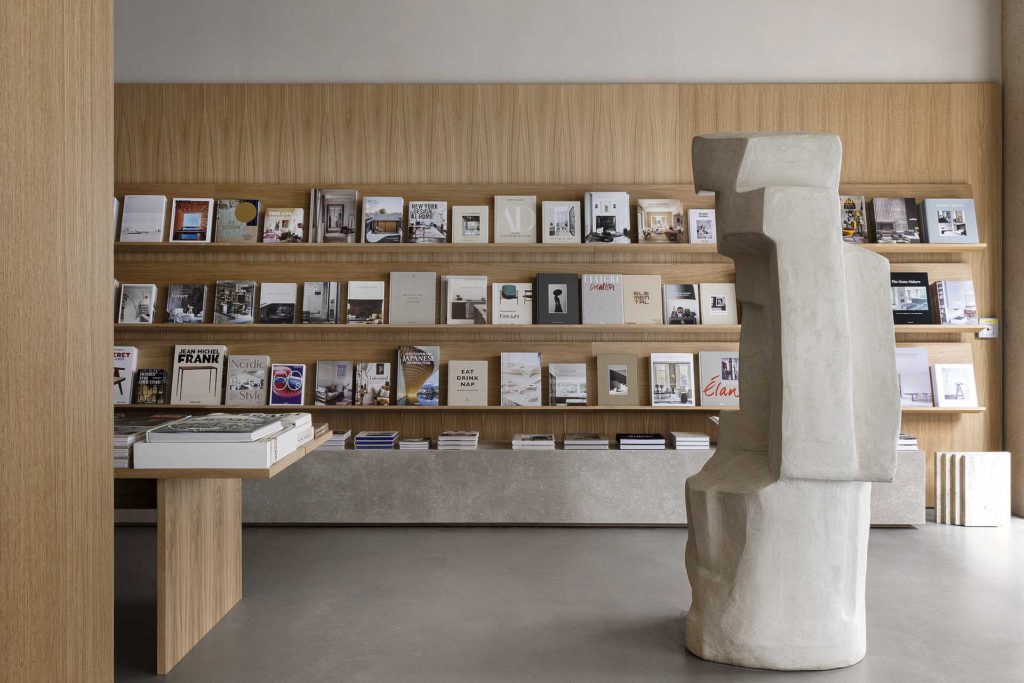 New Mags, Copenhagen. One hundred square meter lot of a building in the Ny Østergade district

Formatted by owners Jesper Svangård and Jesper Oxholm Mikkelsen, New Mags, Copenhagen began its journey as an extension of the two owner’s familiarity in the field of design and furniture ware. Having managed and curated &Tradition, a design furniture company between themselves, the owners then structured the breath of New Mags into realization as a response to their current business. Existing in the main-district of Ny Østergade 28, New Mags was established in 2016. Sitting in on behalf of New Mags for this interview is Malene Kjær Jensen, the head of marketing at New Mags.

Having come into the role in the recent months, she shares that she acquired her position within New Mags as a result of the company growing in size. As she elucidates, «The principles of the store were founded from the adoration for printed materials like coffee table books and magazines alike – in particular, Kinfolk Magazine». Having ascertained their niche, the owners of New Mags, Copenhagen continued to grow in this business model, as a distributor for retailers and bookstores in Scandinavia. Jensen adds that since its opening, New Mags has collaborated with a string of publications, becoming a stockist and distributor for an independent niche of literary goods over the years.

Through the years of 2016 to 2020, New Mags, Copenhagen functioned their business through the confines of their office space in the Birkholmvej 7. As an effort to expand their business and integrate their ethos towards the general public in the district, New Mags realized their flagship store. As of September in 2021, the concept bookstore now resides in a one hundred square meter lot of a high-rise building in the shopping district of Copenhagen.

The pivot to supplying coffee table books and magazines across Denmark and the Scandinavian region was derived from varied reasons by the two owners. As Jensen says, the primary factor to having a focus on this kind of literary goods was prompted by the need for it. It began from a pool of customers who were seeking titles like Kinfolk Magazine and others in the same vein, along with the subsequent lack of suppliers.

«These types of literature can be placed across a home as a lamp or vase is put in rooms to accentuate the mood and feel of it. We at New Mags see these as pieces of art and furniture due to the craftsmanship and tangible value of these books». She adds that there has been a following within the reading community in recent years, of people utilizing books as a means to complement furniture pieces. Jensen states that the tangible and tactile nature of coffee table books entices an individual to seek it out in a room, imploring them to open it. «These books take an individual on a journey».

Considered a concept bookstore – where design and furniture meet books – New Mags’ ethos is focused on the elevation of art and lifestyle that is plateaued through books. While the original idea was not intended to configure a flagship store, the owners strived to serve booksellers and through the extension of that, its readers. Jensen states, «Through this, we at New Mags came to the realization that there was a way that the brand in itself could cater to our customers through the business to consumer sales model».

As such, the owners who have developed a commonality in the reading and design community persevered to ensure the flagship store became a reality. Located in a high-rise building that was developed in recent months, Jensen shares that the reasoning to situate New Mags in the Ny Østergade area was to create an awareness for the brand’s physical space. Sitting alongside restaurants, interior and furniture stores with retail and lifestyle stores in the area, Jensen explains that customers flock themselves to the area and through that, to New Mags.

«The building that was erected this year now has a rooftop terrace area in homage to the garden that was taken down». Along to hosting office spaces and restaurants within the confines of the building, New Mags exists by a series of apartment spaces. Juxtaposing the modern enclosure of the store, the building in which New Mags resides stands apart alongside to the traditional-architectural accents which are familiar across the city.

The design of New Mags, Copenhagen

Implementing design elements of conservative English libraries, the flagship store was designed by Danish designers of Norm Architect. Displaying the coffee table books and magazines alongside each other, the designers have envisioned and birthed a reference similar to pieces of artwork that are displayed in galleries. Accompanying them there are sculptures and objects made of oak wood and golden sandstone.

«The space is circumambulated with a collection of extended study tables and wooden shelving units which house the reading materials». The floor to ceiling windows that frame the side of the store deluge the space with natural lighting during the day. Along the rear area of the store there is an office that can be used by the owners and visiting guests of New Mags, Copenhagen separated by folding oak panels that act as a makeshift wall – allowing personnel to remove or allow the room as an integration of the space.

Tables displaying books and magazines are finished in aluminum. «The intention of doing this was to create a contrast – similar to the types of books carried within, or through the exterior of the building – a modern architectural piece amongst buildings in a conservative design style». To add to this gap the designers of Norm Architect inserted a sculpture by artist Josephine Winding. Its purpose acts as a divider, curating a circular element for guests as they step into the store.

Books and other items in New Mags

Merging books and magazines, each piece of literary item sold in New Mags is chosen by Svangård and Mikkelsen. After research and collaborations with publishers and creators of the magazines, the owners of the concept bookstore have since grown their library of titles over time. Varied in price, each book and magazine differs in genre and subject matter. Some examples of books include Pollock – Basic Art Series by Taschen, a collation of works by Jeff Koons titled Lost in America and The Penis Book/The Vagina Book. In contrast to the books being sold, magazines are focused on titles, some of which include The Ark Journal, Openhouse and The New Era.

Jensen reports that the owners of New Mags receive word of upcoming titles to carry through authors and book fairs they partake in each year – an option that has been practiced over the years. The traits desired and emphasized by the owners are funneled into intention, pleasure invoked in a visual sense and a dissemination of information through printed literary goods. Complementing the sales of coffee table books and magazines within New Mags, the store provides posters, games travel guides, book stands and accessories of sorts for their pool of customers – a means to diversify their offerings.

New Mags plans stance on sustainability and its future

Having hosted a book launch for the former Danish prime minister’s memoir, a step away from their offering of niche coffee table books and design centric magazines, New Mags intends on hosting events in the upcoming months ahead. «There are book signings and a music festival taking place in the coming weeks and months in New Mags’ flagship space». As a means to practice mindful environmental practices, New Mags ensures that they follow through with the city’s requirements to recycle all waste produced within the store.

Jensen states that purchases made by customers within the store are plastic-free. The concept bookstore has produced their line of cotton tote bags that are sold alongside their editorial products. In vein with this, cardboard boxes that have been received through shipping are reused to deliver online orders for New Mags’s customers. Along with hosting events within its physical space, New Mags intends on reproducing their brand and ethos, integrating their inculcation of coffee table books and magazines to readers across Europe.

New Mags is a Danish concept bookstore that was founded by two design store owners who have curated their identity around supplying magazines, travel guides, and coffee table books. New Mags collects and distributes literary goods across the Scandinavian region, where, in the months to come, they look forward to expanding their ranks to countries across the European region.