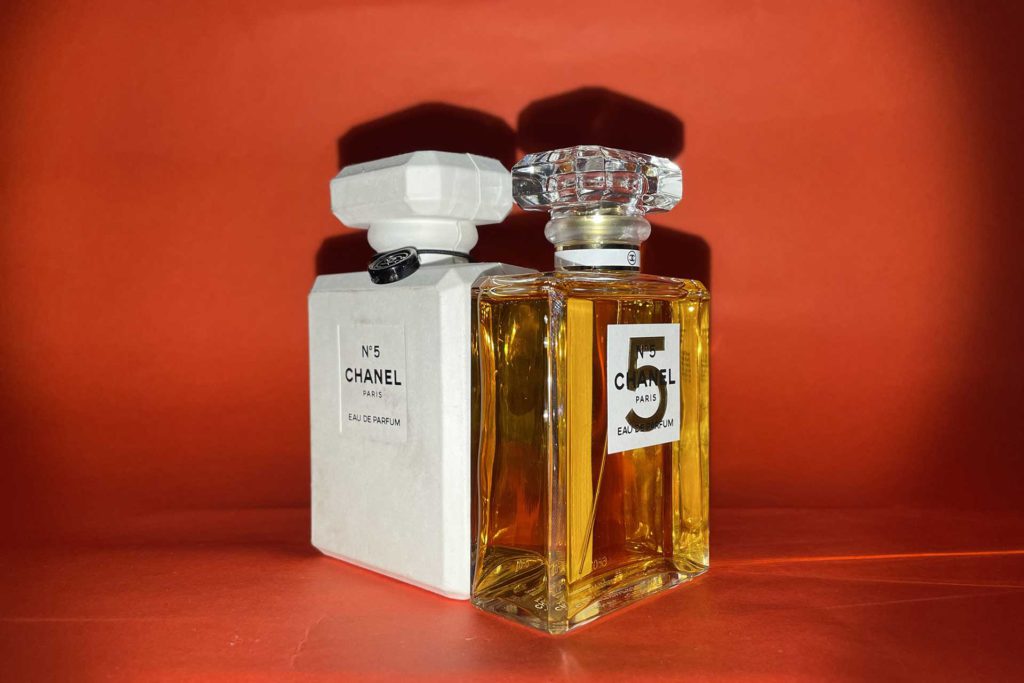 Chanel N°5 Limited edition: the youth of imagination and the expertise of technology

The glass used for perfumery is the most transparent and brightest – the recycling process can alter its quality. The industrial process devised by Pochet du Courval to evolve the Chanel N°5  bottle

In 1921, Gabrielle Chanel chose to keep only the essentials for N°5: the bottle, packaging and label are simple, without superfluous embellishments. 100 years later, in 2021, CHANEL created a new version of N°5 Eau de Parfum: for the first time, the bottle is made of recycled glass. The result of a longstanding partnership with Maison Pochet de Courval. This high-quality glass is obtained through a recycling technology. The packaging has also been redesigned and made of biodegradable paper.

The teams at Chanel and Pochet du Courval, a company awarded the French EPV (Entreprise du Patrimoine Vivant) label, have rethink glassmaking as part of a joint initiative for sustainable development. The result of this collaboration fosters a circular economy, reducing the use of natural resources and limiting carbon emissions, while preserving the aesthetics of the scent. «On average, for 1 million bottles produced with SEVA 3* new generation recycled glass, we save more than 25 tons of virgin raw materials», says Maison Pochet.

The creation of this bottle proved to be a technological challenge, because its crystalline transparency is based on the purity of the raw material used. Not all glass has the same composition, which changes depending on its use. The glass used for perfumery is the most transparent and the brightest, and the recycling process can alter its quality. As a result, in order to master each step of the value chain, Pochet du Courval and its partners have developed an innovative industrial process to ensure high-quality recycled glass. N°5 Eau de Parfum limited edition in the 100 ml format is the first fragrance to benefit from this innovation, which will be extended gradually to other Chanel fragrances from 2022.

Chanel N°5: the story of an iconic fragrance, and a love story

Paris, 1920. At the centre of Parisian high society is a woman whose name is regularly on everyone’s lips. Gabrielle Bonheur Chanel is an orphan, a former singer at the Rotonde, where she was known by the stage name of Coco, who gave up singing when she realized she sewed ‘like a dream’. Her business now has five workshops and three hundred dressmakers. All of Europe desires Coco’s cre- ations, she is at the peak of her fame and apparently has nothing but good luck. This, however, is not true. The love of her life, Boy Capel, was killed in a road accident the year before and Coco appears inconsolable. Just then however, the Russian composer Igor Stravinsky comes to town, fleeing from the Bolshevik revolution and penniless.

They hardly know each other, but seven years previously Coco attended the première of The Rite of Spring at the Théâtre des Champs-Elysées. Both the music and choreography were too original for the audience, but Coco was enchanted by it. The first time they meet, it is love at first sight. Coco invites Stravinsky and his family to live in her luxurious villa in Garches, just outside Paris, where Igor can compose in peace and quiet. Stravinsky accepts and moves in with his wife Katerina, bedridden with tuberculosis, and their four children. The love affair between the two is short and tumultuous: Coco cannot stand the fact that Igor does not consider her to be an artist and this leads to continual fights. She also thinks she is pregnant but then finds out she is not. Once it is all over, Coco throws herself into the arms of the Duke of Westminster, Igor into those of Vera de Bosset, who will then become his second wife. And so this love story also ends without any offspring. Perhaps, in this case, there was one though: the fragrance Chanel no. 5, created the very year that Coco met the perfumer Ernest Beaux.

Coco Chanel: the places of inspiration

If you want to know more about this story, you can read Coco Chanel & Igor Stravinsky by Chris Greenhalgh. Otherwise you might be satisfied with one more titbit. For most of her life, Coco lived at the Hotel Ritz in Paris, in one room, totally bare and completely white. The only decoration was a Russian icon on the wall, a gift to her from Igor Stravinsky. Instead, in each of her other residences – the chest apartment in Rue Cambon, the hôtel particulier in Rue Faubourg Saint-Honoré to which she moved in 1923 and her villa in Lausanne (1968) –, Coco Chanel would brighten the walls with her Coromandel screens, composing a continuous narrative and introducing them into the boiserie with what we might consider acts of random abandon.

A universe composed of different shades of black lacquer, caressed by gilded details and flaunting surfaces budding with designs starring hard stones and mother-of-pearl, for Coco Chanel, these screens were an obsession. A kaleidoscope of flowers and boats on celestial lakes. Glimpses of Eden-like gardens, exotic birds and ethereal landscapes along the paths of dreams blossom and bloom on a background of shiny black lacquer resembling a full moon night. Lacquer is my element, it is deep and all-consuming, it’s not something that jumps out at you. I’ve bought thirty-two screens and have given many away, but I still have enough to decorate my homes with.

Another Coco Chanel’s obsession: perfumes. She considered fragrances as extensions of garments, like invisible dresses. In 1921, Beaux proposed to the designer ten samples, numbered from one to five and from twenty to twenty-four. She picked the fifth one, being five also her lucky number. I present my dress collections on the fifth of May, the fifth month of the year and so we will let this sample number five keep the name it has already, it will bring good luck. Jasmine, ylang ylang, rose and aldehydes were the ingredients characterizing the scent. The perfume was marked by a feeling of cleanliness. Fresh soap was an element that reminded Coco of her mother, a laundrywoman in Saumur, France, who died when she was just eleven years old. The fragrance embodied her principles.

Chanel N°5 aimed at breaking rules and conventions. At the time, wealthy women wore perfumes inspired by specific flowers, while ladies belonging to lower classes used fragrances characterized by musk. Chanel N°5 combined high and low, rose and jasmine, purity and audacity, to defy the notion of perfume as a representation of social status. Its packaging, a plain laboratory bottle, represented the designer’s modus operandi, transforming a functional object into a sophisticated creation. After selecting the fragrance, Coco sprayed it while having lunch in the French Riviera with Beaux and other friends. Women passing by stopped to ask more details about it, including its name and creator. That’s how Chanel knew it would become a success.

In 2015, Olivier Polge was appointed as the house perfumer for Chanel. Polge is the successor of Ernest Beaux and his father, Jacques Polge, who created fragrances including Coco, Allure, Chance, Coco Mademoiselle, and Bleu, amongst others. What Olivier Polge admires about Chanel is that she managed to reveal herself through a perfume, a tool in the expression of one’s personality.

To celebrate the one-hundredth anniversary of N°5, the brand has launched Chanel Factory 5, a collection of seventeen limited-edition products featuring Chanel N°5 in their mix, inspired by everyday objects, such as tea boxes and cans. «By taking popular consumer items out of their context and dressing them up in the aesthetics of N°5, we return to Chanel’s first creative gesture: that of transforming a functional object into a desirable luxury item».

Thomas du Pré de Saint Maur, Head of Global Creative Resources Fragrance and Beauty, highlights the relationship between the new collection and the vision of the founder. A concept related also to Pop Art, which transformed everyday items into artworks. By launching Chanel Factory 5, the brand aims at expressing its everchanging nature, without forgetting the female individual, at the center of Coco’s attention. «A woman’s perfume, with the scent of a woman». She used to describe her fragrance by remarking the freedom and boldness it gave to the women who wore it. For du Pré de Saint Maur, these aspects represent key characteristics of the collection, which favors «the audacity to prefer the youth of imagination to the oldness of habit».

The largest size of N°5 proposed by the Maison is available in only 55 pieces, custom-made, hand-engraved. This bottle is the result of the collaboration between CHANEL and Baccarat and contains 2021 ml of fragrance. 2021 not only as the year of N°5’s 100th anniversary, but also because the sum of the four digits is exactly 5. Presented in its most precious form, the Extract, the golden color is highlighted by the Baccarat crystal bottle, whose diamond cut is obtained through a special technique.