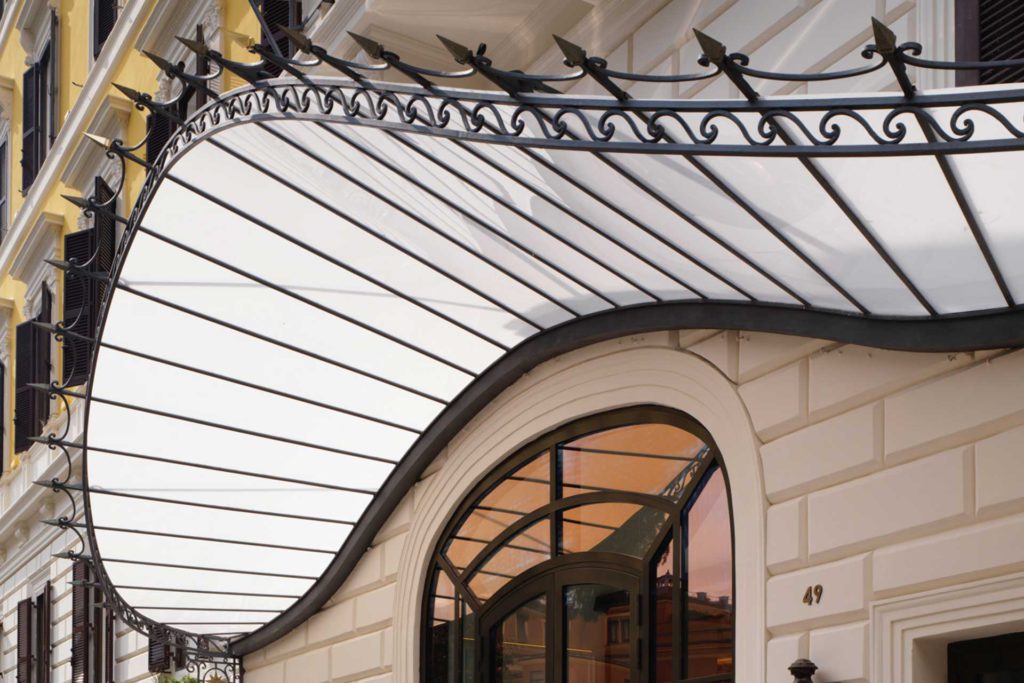 Il Giardino Ristorante, Rome. A culinary experience on the upper floors of the ludovisi district

French studio Jouin Manku has designed the restaurant hall on the top of the Hotel Eden Roma, Dorchester Collection – and the 200 square meter kitchen for chef Fabio Ciervo’s ultrasonic cooking

If you come from Piazza del Popolo, to get to Eden you cross the curves of Viale del muro Torto, behind the Pincio and bordering on Villa Borghese. Descend along Via di Porta Pinciana, you’ll find the Eden, an outpost of Rome’s beauties: the sinuosity of Via Veneto is close by, but here there is also more space, more air, and you can fully enjoy the opening toward the city. The Hotel Eden Roma, Dorchester Collection is the last building to rise between the Ludovisi district and the historic center of Rome. Francesco Nistelweck, a hotelier from Munich who had already managed the Hotel d’Inghilterra and the Hotel de Russie, fell in love with it during a visit to the then new Ludovisi district. In October 1889, he transformed the structure into a hotel with sixty-three rooms designed by his wife, Berta Hassler, daughter of the owner of the Hassler Hotel. The hotel soon became a destination for foreign tourists visiting Rome. In 1902, another floor was added to the building, along with the terrace.

Il Giardino ristorante located on the sixth floor of the building

From here you can see the whole city. During the day you can distinguish the contours of the buildings that make Rome the eternal city. In the evening, at dinner, it is an evanescence of lights in which you can distinguish the top of Piazza di Spagna with the Spanish Steps, and the dome of the Vatican. Airplanes fly high between New York and Moscow, as in a film set – it’s obvious to talk about movies in Rome, where everything goes back to the splendors of the Dolce Vita, especially in this neighborhood. The rest of the city is elsewhere, close by but silent and muffled in an evening stillness interrupted only by the flashes of red lights signaling obstacles to flight.

Combining the natural characteristics of the hotel with the view, the light and the city, Jouin Manku has designed a space that integrates with its surroundings and enhances them. The Jouin Manku studio – founded in Paris fifteen years ago by the meeting of the professional experiences of Patrick Jouin and Sanjit Manku – offers solutions between industrial production and traditional craftsmanship. All day long you can enjoy executive chef Fabio Ciervo’s modern interpretation of classic Italian and Roman cuisine. Ciervo, inspired by the knowledge of his farmer grandfather, a connoisseur of raw materials and a sports enthusiast, uses cutting-edge technology and scientific instruments, such as ultrasonic cooking, in his 200 square meter kitchen overlooking Rome. Adjacent to the Giardino restaurant, the starred La terrazza.

Born in 1979 in Sant’Agata de’ Goti, a small village in the heart of the province of Benevento, he cultivated two passions: cooking and sport (rings). This is the origin of his research of a nutritional system attentive to the physiological needs of the body, proven by scientific studies. After graduation, a first training in London (in 1998 she is a kitchen commis with chef Adriano Cavagnini at the Italian restaurant of the Grosvenor House Hotel), she sees closely the kitchen of the starred Chez Nico, the restaurant of Nico Ladenis also located inside the hotel. Studying new ingredients, such as different roots, black peel, turnips: all typical products of colder areas. It was in 2003 that he returned to Italy, called back by Adriano Cavagnini, in the kitchen of Hotel Eden in Rome. After a new English stint alongside Michel Roux at the Waterside Inn, Ciervo became executive chef of the Eden’s restaurant, at the head of a brigade of 30 people. At the end of 2012, at the age of 32, he won his first Michelin star with the restaurant La Terrazza. In November 2017, just seven months after Hotel Eden reopened, he was awarded a Michelin star again.

Applications of ultrasound in food technology

As Farid Chemat, Zill-e-Huma and Muhammed Kamran Khanis sustain in Applications of ultrasound in food technology: Processing, preservation and extraction using ultrasound, full reproducible food processes can now be completed in seconds or minutes with high reproducibility, reducing the processing cost, simplifying manipulation and work-up, giving higher purity of the final product, eliminating post-treatment of waste water and consuming only a fraction of the time and energy normally needed for conventional processes. Several processes such as freezing, cutting, drying, tempering, bleaching, sterilization, and extraction have been applied efficiently in the food industry. The advantages of using ultrasound for food processing, includes: more effective mixing and micro-mixing, faster energy and mass transfer, reduced thermal and concentration gradients, reduced temperature, selective extraction, reduced equipment size, faster response to process extraction control, faster start-up, increased production, and elimination of process steps. Food processes performed under the action of ultrasound are believed to be affected in part by cavitation phenomena and mass transfer enhancement.