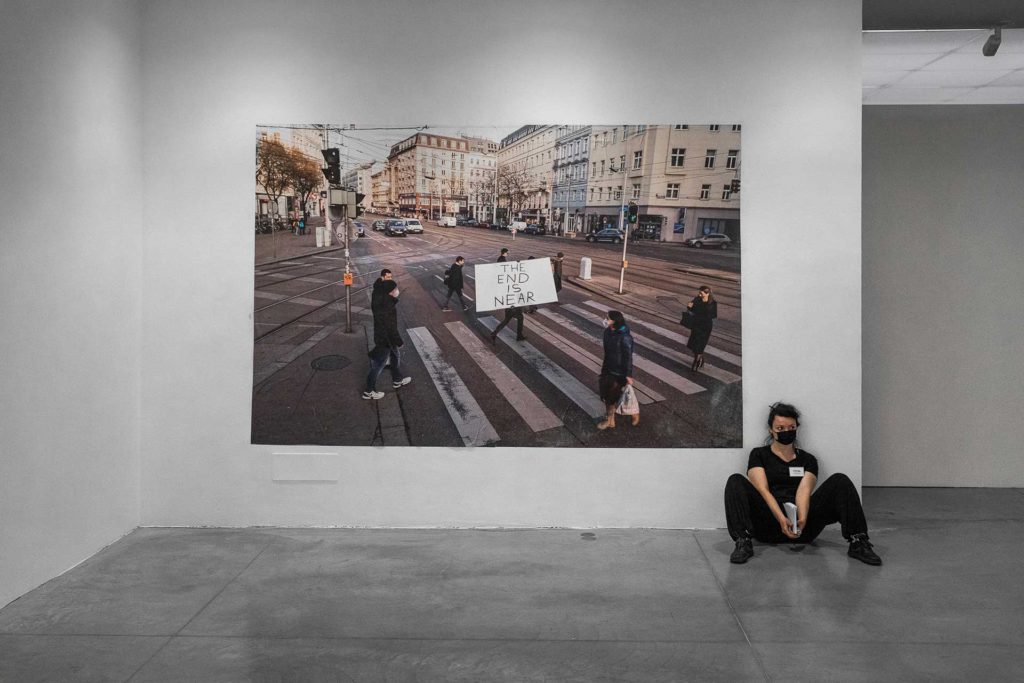 Is ‘under observation’ a synonym for ‘safe’? Aldo Giannotti presents Safe and Sound

Our blasé attitude towards the overuse of technology, can in turn become state surveillance, mass collection of personal data

Safe and Sound show in Bologna

Museo d’Arte Moderna di Bologna – MAMbo presents its first solo show dedicated to the multimedia works of Aldo Giannotti, entitled Safe and Sound. As is immediate within the temporary exhibition’s title, the principal theme throughout is that of security, man’s obsession with creating an environment devoid of danger and how perhaps these alleged safe practices could in themselves be damaging. As a generation whose addiction to technology is normalized, even applauded, Giannotti investigates how our blasé attitude towards the overuse of technology and our reliance on it in terms of so-called safety, can in turn become state surveillance, mass collection of personal data, and ultimately a step backwards from freedom and not the contrary, the question turns to rebellion. For an exhibition conceived pre-pandemic, the theme coincides neatly with current debates regarding spread of information and misinformation, control and safety.

Safe and Sound takes over the Sala delle Ciminiere, an open space on the museum’s ground floor. The walls have been stripped bare, demonstrating lasting construction marks, playing on what is considered the norm in exhibition layout and appearance. Scaffolding stairs take center stage of the exhibition space, leading visitors upstairs to a door roughly cut out of the brick wall.

Lampoon review: reimagining the role of the stewards

Stewards, in their uniforms and official badges on lanyards, have symbolized a physical form of safety. They are relied upon to ensure a safe visit, they are aware of the exits and the appropriate protocol when necessary. Yet, the visitor has come to recognize stewards as relics themselves, lifeless, often a book or phone in hand, occasionally coming to life to inform the disturber to not touch an artwork. Giannotti reimagines the role of the steward, where they are transformed into artworks, they whisper to the visitor «Try running from artwork to artwork», they place chairs in an unhelpful yet aesthetic pile; the museum steward is reborn, no longer a symbol of authority. Now they hold a speaker in hand and dance through the rooms, and why shouldn’t they? When asked by an unsure visitor if they can climb up the Mobile Stairs or take a pen to mark the wall in Filling Time, Giannotti’s stewards answer with another question «Can you?».

A recurring theme and medium is that of CCTV and the exploration of connections, whether as a mirror, where one can observe visitors in the parallel room, The Others, or as a means of communication, Mutual Surveillance. The latter highlights a live feed connecting MAMbo in Bologna with MAMbo in Bogotá; the visitor can create gestures of communication and show written messages such as, «Are you okay?» or «Do you feel safe?», which are then transmitted to a screen in the Colombian art museum. By the museum’s entrance in Bologna, the artist has created an exterior section of the exhibition, a white box entitled The Column, where if equipped with a pen you are free to comment and scribble, however each moment is recorded by a security camera as a reminder of not only the presence of big brother, but also the exhibition’s key theme; is under observation a synonym for safe?

Throughout, as a means of connecting the artworks, the upstairs with the downstairs, the temporary with the permanent, the indoors with the outdoors, Giannotti has created a collection of postcards, each with an action to complete. These actions transform the visitor into the performer, a means of minimizing the distance between the space and the artworks, the visitor is encouraged through small, almost insignificant acts to perform the museum. By reading the artist’s instructions, the visitor can forget museum and societal norms and follow these recommendations on how to rebel and develop a new way to visit an exhibition. One card reads «Look at an artwork upside down» or «Gaze at something that is not art for as long as you can». However, these actions are not restricted to the walls of MAMbo, they can be brought to the next exhibition space, as a reminder of how one can experience a cultural space no longer as a passive observer but as an active participant. These simple actions promote a dialogue between visitor, steward, artist and artworks.

From the collection of Morandi and Arte Povera works on the second floor to neon lights in the entrance hall, Giannotti’s voice and performance continue to take space, encourage interaction and leave visitors with a revitalized control over their actions. The visitor is often challenged by the artist’s instructions, as demonstrated with The Chainsaw. With a black felt tip pen, the artist wrote below the drawing of a chainsaw: ‘this drawing can be taken for free by the collector if they come with a chainsaw and saw the piece off the wall’. Three days post-opening the piece was ‘stolen’, an illegal act becomes a collective performance.

MAMbo continues to promote and support the performing arts, an art form often overlooked due to its ephemerality if not documented and lack of tangibility to be included in the art market. In 1977 Marina Abramović and Ulay presented Imponderabilia at MAMbo, a work which consisted of the two artists standing naked one in front of the other in a doorway, through which visitors must pass through. The performance, later interrupted by police for obscenity in a public place, saw approximately 350 visitors take part, physically coming into contact with the nude artists, and by doing so becoming themselves an active part of the artwork. Very much in the style of Abramović, Giannotti questions the relationship between the art institution and the public, why must it continue to be passive, can an active relationship not be beneficial to both sides? On exiting the exhibition, the visitor/performer feels encouraged to question figures of authority, rules and societal norms, both in and out of the art museum.

Multidisciplinary artist, Aldo Giannotti currently lives and works in Vienna, Austria. Giannotti studied Photography at the Academy of Fine Arts in London, and at the Akademie der bildenden Künste in Munich, eventually graduating in Painting at the Accademia di Belle Arti of Carrara in 2002. Giannotti has been the recipient of several awards, such as the Pollock-Krasner Foundation Grant (2020), Kunsthalle Innsbruck (2019) and the recognition award from Strabag Kunstforum (2016).