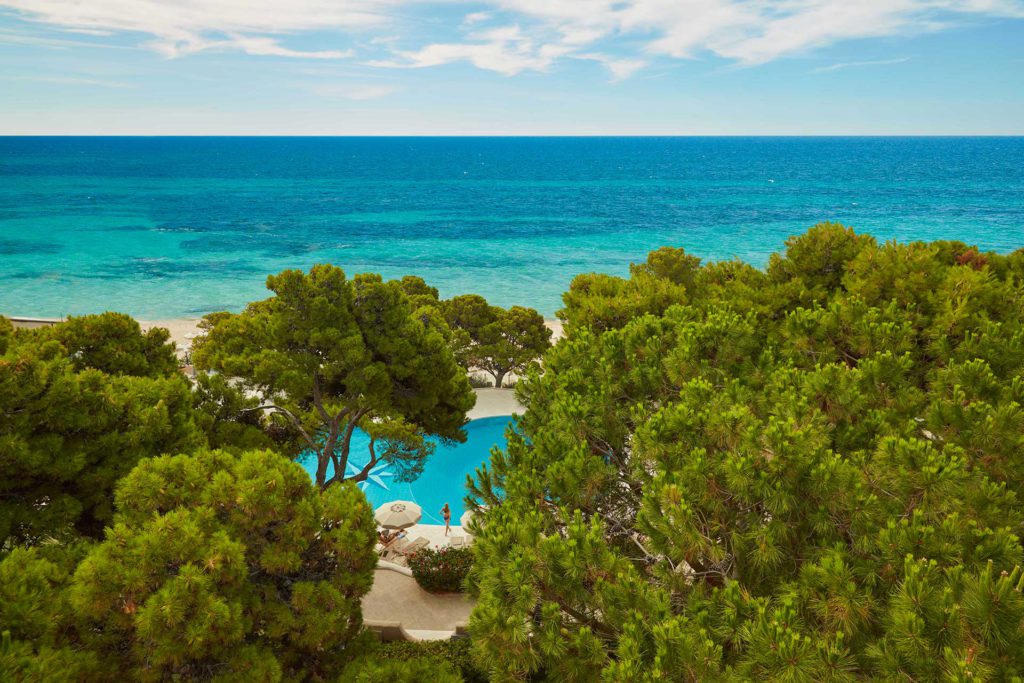 Forte Village, Santa Margherita di Pula. A fun thing I would do again

A resort in Sardinian nature that exceeds the definition of a resort. The greenery, the sea, the privacy, the design, the food, the wellbeing – and everything the traveler could desire

Vacationers fall into two categories. The adventurer and the relax seeker. The first one plans a complex itinerary for his trip. He studies the map, books hotels in different cities, climbs up the mountain to visit the ancient monastery or down the cliff to reach the cove. He returns home more tired than when he left. The second one needs tranquility, and at the seaside, he will book in a tourist village. I belong to the first category, unless it’s to go to Forte Village.

A supposedly fun thing I’ll do again, changing the title of a book by David Foster Wallace – A supposedly fun thing I’ll never do again, an essay-report on a week-long Caribbean cruise, with sociological analysis of the travelers and crew and a reconstruction of the extra-luxury cruise industry. The dynamics of the tourist village are not for everyone. But one gets used to them easily, one is willingly corrupted by the comforts.

This is even more true for the Forte, which resembles the utopian city where everything works. A happy island full of all kinds of services and blandishments. The set of a Netflix TV series. Not surprisingly, Forte Village has been the winner of the World’s Leading Resort award at the World Travel Awards for twenty-three years.

Forte Village is located here, just a forty-minute drive south from Cagliari Airport – Sardinia. What is most surprising, once you have arrived at your destination and passed the reception hall for check-in, is the greenery. Silence and vegetation. Forty-seven hectares of park in which live fifteen thousand trees, two million plants and bushes and flowers that best represent the lushness of the Mediterranean and blend with the exotic charm of distant vegetation. Pines and eucalyptus, olive trees and tropical plants, palms and bamboo, hibiscus and yucca as well as aloe vera. An orchard and a vegetable garden for the organic cultivation of fruits and vegetables are under construction.

Through a concerted plan with the Department of Environmental Protection, the beach has been returned to its splendor and an expansion project will further develop its extension. In 2011 Forte Village received the title of Best Green Hotel in the World. A rainwater harvesting system was installed in the seventies and then a water recycling system was started – as well as desalination for irrigating the gardens. A collection rate of seventy percent of waste for recycling has been achieved, while plastic is gradually being eliminated.

The resorts inside Forte Village

The Children’s Wonderland hosts its BarbieTM House and all the themed activities and Mario’s Village, the Aquapark with its six slides and its pirate galleon, the theater workshop and the arts & crafts workshop. For the kids, instead, the Leisureland, with its go-kart track, bowling and disco.

A man needs to pack a pair of long pants if he wants to go to Beachcomber, Heinz Beck’s restaurant. It’s common sense, of course. But in the holiday atmosphere you might want to go to dinner dressed in shorts. It is possible in other restaurants, but not at Beck’s. You are in perhaps the most evocative location in the resort, a terrace overlooking the sea. In the evening, you can enjoy chef Beck’s balanced cuisine by moonlight.

Otherwise you can choose from twenty-one restaurants. There are one hundred chefs. In addition to Beck, others include Andrea Berton (new entry for 2021), Massimiliano Mascia, Rocco Iannone and Paolo Simioni, Executive Chef of Forte Village. There are eighteen bars and a wine cellar with six hundred labels.

The greenery radiates seamlessly – not even in areas you’d think indoors, like the spa. The Acquaforte Thalasso & Spa’s path is accessible not only in the summer months thanks to crystal domes that allow you to admire the tropical garden. There are six tubs. A method studied by Forte Village’s medical team, led by Dr. Angelo Cerina, is capable of enhancing the beneficial effects of water thanks to the combined action of different gradations of temperature and salt concentration, which this year also sees the development of an ImmunoBoost program, to strengthen the immune system. A series of treatments completes the path. These include the Thalasso massage – a massage done in the absence of gravity – and a menu of detox and weight loss protocols tailored.

Forte Village Resort is a five star resort consisting of eight hotels with a total of seven-hundred-and-twenty-eight rooms. It is located in one of the most picturesque and unspoilt locations in southern Sardinia in Santa Margherita di Pula, forty kilometers from Cagliari. The resort will be opened until November. Services will be slightly reduced compared to the summer.