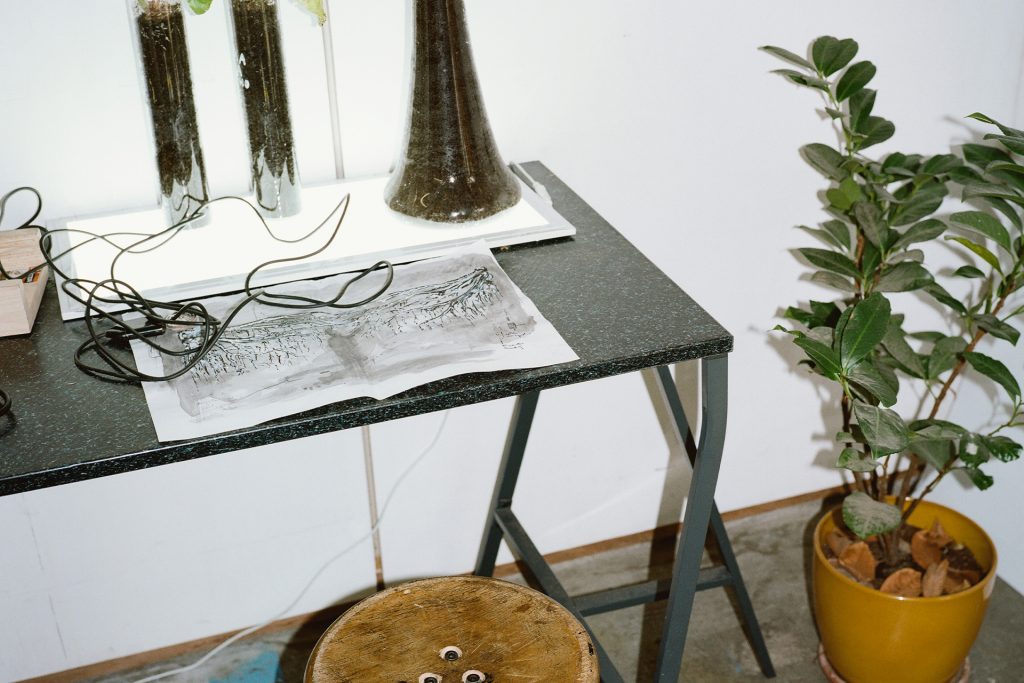 A conversation between Risto Linturi and Thijs Biersteker

Linturi is a synthesizer, using crowdsourcing to gather people’s ideas and feedback. While he spends a great deal of time thinking about technology, he has an appreciation of the outdoors and of ants, in particular. «We are all but ants and it takes a lot of ants to build a proper anthill – and there is no other way to do it but by unifying our ideas through communication», Linturi says from his cottage in the Finnish countryside. Biersteker is speaking from the museum where he is finishing the build out of his latest installation:  «I use art as a vehicle to tell those stories in ways that people will not be numbed by the numbers». Turning complex environmental data into a tangible experience can help people understand what we are at stake of losing. During the pandemic, there were less eyes on the Amazon basin, and as a result deforestation increased. Concerned by the rise, Biersteker built an installation titled Wither using real-time deforestation rate data that signals the leaves of the plants to become translucent and disappear based on what is happening in the Amazon. «This project takes that unseen data and turns it into something in front of you», Biersteker says. Linturi does not create art for museums. He has used technology to make points with memes before the form of cultural transmission was even a buzzword. In the late 1990s, Linturi placed a webcam in his fridge to film the mundane. «I ridiculed Finnish legislation that would have made it a requirement to store all internet video uploads for up to three months. I meant for it to be a joke to show that not all video content is necessary to store, and that some of it is meaningless». Linturi’s fridge video spread and the legislative proposal was squashed. Both Linturi and Biersteker find value in expanding people’s horizons by exposing them to the absurd. Recounting a performance art experience that had a profound impact on him, Linturi described watching a Dutch artist discuss and illustrate a dodo steak – grown, cultured, and 3D-printed from the DNA of a bird that went extinct in the seventeenth century. The artist then showed 3D-printed Madonna steak grown from the pop music icon’s stem cells. «The idea, you can never forget it», Linturi says.

Biersteker incorporating empathy into his installation

The idea clicks with Biersteker: «When you make it so ridiculous and the topic is so far out there, you can scale it back and it makes lab grown meat more acceptable. Using technology and techniques that people have not experienced before is a way to open their minds and make them receptive to new information». Biersteker used this approach in China, where it is difficult to discuss such topics due to media censorship. Rather than building an installation that records pollution levels, his team built a sensor system that detects the photosynthesis process of the tree, and communicates how the tree is feeling at the moment, based on real-time environmental impact data.  «When people saw the tree, they did not talk about the environment or pollution, they talked about how the tree was feeling, and they had empathy for the tree and were interacting with it. It became a language bridge, where we use data to make our point». Biersteker incorporates empathy into his installation by showing how trees take care of one another. Titled Econtinuum, the work is part of the inaugural exhibition of Next Museum, a media art museum in Amsterdam. The piece explores the symbiotic relationship of trees, using an illuminated root structure to depict how trees talk underground, nurture one another, and warn each other about predators. Biersteker collaborated with botanist and plant neurobiology pioneer Stefano Mancuso to weave together scientific research about plant communication and intelligence into an interactive tree root sculpture. «In the two transparent root structures an eco-AI uses the sensors in the room to mimic the intelligent symbiotic relationship taking place underneath the forest floor. The sensors in the work absorb the visitors’ behavior into the electro and chemical tree-to-tree conversation, enabling the work to gain lessons from its visitors», Biersteker explains. Linturi proceeds: «When I read about anthills and how the ants behave and communicate with pheromones, the more I appreciated the anthill. The more you understand nature, the more you get attached to it and the more you wish to conserve it». Biersteker clarifies: «I am not trying to explain plant intelligence. I want to show how an ecosystem works, and how humanity is moving away from it. The further we move away, the less responsible we feel. We need empathy for our surroundings and to extend beyond our species. The work provokes the idea that a symbiotic collaboration is our only way forth».

Linturi’s memory about James Lovelock’s Gaia theory, which proposes that all living organisms interact with surrounding inorganic materials to form a complex, synergistic system that maintains life on our planet. «Lovelock saw the Earth as a system seeking balance and was able to prove his theory – it was accepted after the turn of the millennium. We humans are supposed to be the planet’s brains. Let us hope we wake up fast enough to stop the demise and give our Earth more breathing space», Linturi says. Linturi turns to French philosopher and Jesuit priest Pierre Teilhard de Chardin. «When telecommunications was invented over 100 years ago, de Chardin wrote that as we get better and better at communication, we become more like neurons in the brain and have a higher-level mindset. Today, social media is creating feedback loops, like a joint brain in a sense». Is social media a collective human brain of sorts, and could we combine our social network with a nature-based one? It is an idea that Biersteker has mused on. «Let us imagine that ‘singularity,’which is when man merges with computers, might not be with humanity. When AI ‘awakens’, we expect to co-exist as its creators, and our neuro-driven brain data will become one with this intelligent network». What if AI did not want to choose humans, Biersteker asks.  «What if we envision a future where an intelligence, based on networked computers, chooses a symbiotic relationship with the biggest network on our planet, Nature – instead of partnering with the individual driven, energy consuming behavior of humans. It would be a more logical choice to partner with nature’s network, with 99% of our planet’s biomass, the biggest network on our earth, that has been optimizing its communication and use of energy for millions of years».

Can virtual reality help people feel closer to the natural environment, especially when there are obstacles to visiting it like distance, cost, or a global pandemic? And, can virtual experiences inspire active conservation efforts? Linturi says it depends on how realistic it feels.  «It depends on whether it is connected to the real world or not. If it is an Avatar-like world, then it is different from if it is the real one-to-one nature. A year ago, I spent about one month or 250 hours in Ancient Greece. I enjoyed walking the hills and the mountains and searching for olives». It seems Linturi is talking about a physical trip he took, but then Biersteker realizes he is describing his experience playing the video game Assassin’s Creed.

A society that is data obsessed

Though Linturi visited Ancient Greece only virtually, he speaks as if it were a real experience, underscoring how vivid today’s video games can be. «The most meaningful place in the game for me was Delphi, because I once hiked there in real life. Virtual reality had recreated all of the ancient buildings and I could see what it might have looked like in ancient times». Biersteker is not as convinced: «In real life you can walk through a forest and interact with an object and choose what you do – that is creating a deeper understanding of something. I do not think virtual reality can bridge that gap». Linturi weighs Biersteker’s hesitation.  «The main point is to connect it to physical reality, to not separate it from nature», Linturi says.  «Having a storyline helps with making people care. People relate feelings to storylines and they wish for good endings». The world’s attention is focused on COVID-19, and how that story will end. Biersteker believes there could be some silver lining in the pandemic. «The pandemic has given us a speed course in how to quickly adapt to society. People have learned to listen to science as a guide, and we are able to make changes in our behavior quickly». As the number of cases increased throughout the early stages of the pandemic, people started paying attention to the statistics. «We have gone from a society that was not as fact-based or data-driven to a society that is data obsessed, which is good since now we can make a transition to a data driven society with other issues too», Biersteker says. Bierstecker sees hope in the European Union’s €750 billion ‘green recovery’ plan that passed in late May of this year. As the world’s largest ‘green’ stimulus, which includes funding for renewable energy, building renovations, and clean transport, the package aims to address the economic downturn caused by COVID-19 and to fulfill the EU’s goal to cut emissions to ‘net zero’ by 2050.  «When people come out of lockdown, they go into a park, they go into nature if they can, and that shows what people’s priorities are and how we value our surroundings and nature. The pandemic will have negative impacts, but knowing we are flexible as a society has done a lot of good».

is one of the leading telecom and futurology consultants in Finland