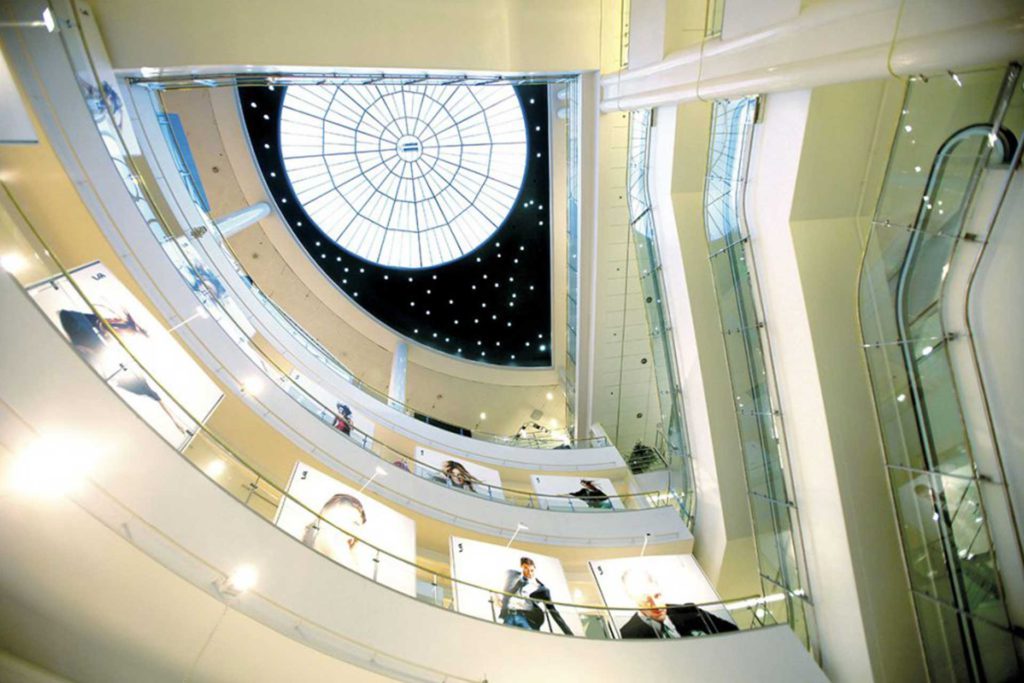 In 1852 Heinrich Georg Franz Stockmann of Lübeck arrived in Finland. He worked as a bookkeeper and cashier at Nuutajärvi Glassworks

«Stockan kello» (Stocka’s clock) has become a Helsinki symbol as well as a meeting place. It’s not a case if this clock is at the main entrance of Northern Europe’s largest department store: Stockmann. The building extends itself in more than fifty-thousand square meters of shopping space across ten floors. Visitors can find fashion brands, cosmetics, design, souvenirs and much more.

Founded in 1862, it has nothing to envy to Harrods in London or Galeries Lafayette in Paris. Stockmann Helsinki Centre, in fact, is the biggest one among the six stores in Finland’s major cities and local department stores in the Estonian capital Tallinn, and the Latvian capital Riga. Thanks to a selection of products, this store has become a hub for brands. It also tops the category in terms of sales. Its logo, which represents a set of escalators, is nowadays known worldwide.

As specialty stores have taken hold in recent years, Stockmann has been keeping up

Since 2017, the department store includes a number of shop-in-shop departments and services. Above the main items one can find in a similar place, Stockmann goes a step further. Beauty and wellness characterize, for instance, the seventh floor, through beauty salons, natural products shops, nailcare studios, hairdressers, dental care, and skin & esthetics. From sushi to pizza, the store also hosts a good selection of café and restaurants, mainly located on the first floor, but also at the very top of the building. Not to mention the espresso house, for those who fancy a coffee break while shopping.

At Stockmann, there is something for everyone. If you like plants, for example, the first floor – where flowers shops are located – and fifth floor – with a gardening department – become stops. Children are the protagonists of the sixth floor, on the other hand. With all these options, the store attracts millions of customers every year. Placed on the eighth floor, Stockmann’s Visitor Center gives you advice on tax free matters and fills in tax free claims for you in different languages. International customers also have the possibility to order products through the Export Service, which ships items both to Finland and abroad. In this case, the sales department delivers products to the export service, where clients can later pay for both the products and the shipping. But, first of all, tourists are entitled to get a discount voucher to ten percent on all regular priced purchases on one day of their choosing.

In 1852 Heinrich Georg Franz Stockmann of Lübeck arrived in Finland. He worked as a bookkeeper and cashier at the Nuutajärvi Glassworks. Seven years later, the glassware owner opened a shop in Helsinki with him as shop manager. In 1862, Stockmann took control of the business, which he had managed – from the outset – in his own name. Twenty years later, Stockmann opened his grand new premises – the so-called ‘continental department store’ – in a building that he had acquired along the Senate Square.

At present, Kiseleff bazar is the name of the building. From 1911, Stockmann gradually acquired ownership of its current department store block in the city-centre of Helsinki. Initially, a two-storey brick building designed by Sigurd Frosterus was built at the corner of Pohjoisesplanadi and Keskuskatu. Fifteen years later, there was the opening of a new department store building still designed by this Finnish architect on four floors. The inauguration of the gem of this empire – Stockmann Helsinki Centre – took place in 1930, with a design in nordic Art Deco style. Since then, several expansions and renovations have taken place, with the last major change in 2010.

Stockmann Helsinki Centre is part of the original Gazelle block in the district of Kluuvi, not far away from the Senate Square where the main businesses of the founder had their premises. The venue is nestled in the heart of Helsinki, only a few minutes away from central railway station. The area is known for its modern vibes, theatres, shopping venues – there are also Kluuvi shopping centre and Sokos department stores – and restaurants. At the same time, it represents the commercial soul of the city. The main offices of Finnish banks are located there and the district experiences a concentration of jobs. Same goes for the university. Interesting to know that citizens don’t use this name, which means gloe lake. A bay closed up, as it was originally the district before becoming swamp. Helsinkians usually refer to the area as keskusta (the centre) or ydinkeskusta (the core centre).