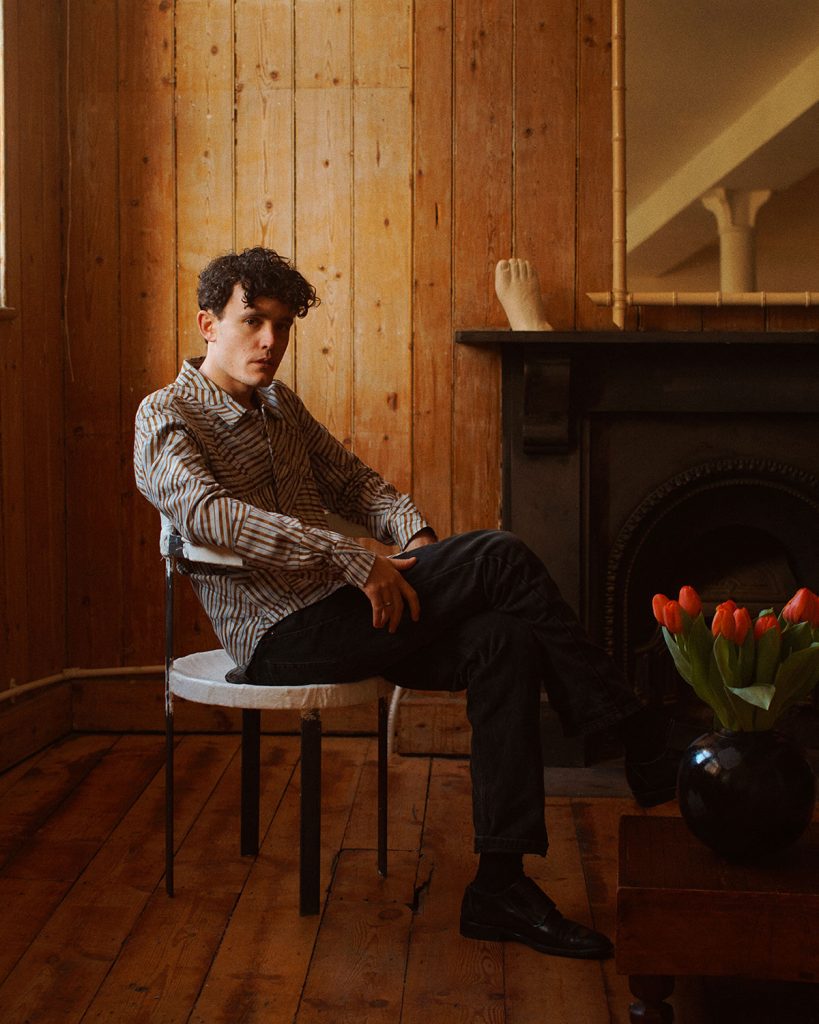 The ambiguous design dealer discusses the mindset of never having something that you don’t want or need, which you’ll eventually consider to be waste

Off the path of the Borough area, London, you’ll find Lant Street, a dead end road. From a distance, the first thing you’ll see is the branded brick façade of the Gladstone Arms — a pub that dates back to the 1920s. On your right is 59 61 Lant Street, a war era industrial building whose ground floor is painted white, and with its upper floor retaining the weathered brick tapestry so identifiable with London’s older structures like The Glad. Jermaine Gallacher is the man behind the facade, a forthright manner is felt in his presence and the interior which Gallacher’s showroom inhabits is no less vocal. «I had a stall at the Spitalfields antique market, sort of doing the same thing I’m doing now, I still go. They’ve sort of ballsed it a bit. Gallacher, originally from Brighton is now a part of the fabric of London, specifically Borough. I’ve been living here for around ten years. It’s a nondescript area, isn’t it? It’s central London, though there’s not much of a neighborhood».

He studied as an illustrator, at the Camberwell College of Arts. «I wouldn’t say it’s enriched what I do, it didn’t guide me on to this. I’m still accumulating knowledge even now, I don’t think I’ll ever stop — but I never had a formal training in any of this stuff. It really is a basic as buying things I like. There is, however, a clear language between all of Gallacher’s endeavors. I have an interest in looking around me at lots of things, but I’m quite a philistine, I’m not going to the newest exhibitions. That kind of thing doesn’t inform what I do».

It shows, apparently, as to date Gallacher’s taste has gained the appellation offbeat. «It comes from nonconformism – I had a friend write a press release when I had a shop in Soho, she was the first one to use it actually». The tendency to not conform is a far cry from the twee moniker. Rather than a studied flouncing of convention — of what came before — it’s a little more nuanced than that. «In the last couple of years I’ve been championing designers’ work that I like, but it all comes from the same thing. When I first got this place I did a show called Smoke and Mirrors which just a fun celebration of things, I had some friends making stuff for it because. I think there’s a danger even with offbeat furniture of it all just being secondhand stuff — which is lovely — but for me. I’m into buying things that are ambiguous and don’t have a name attached to them so somebody can’t just go ‘I know how much that’s worth’, you can make up a bit of magic about it and because of that, I’m also into having contemporary. Why would I want something from the eighties? I love that aesthetic, but this is now. I’m just as into modernity as I am into antiquity because I find it a bit boring when people think everything’s been done. It’s not true. That green chair over there by Lukas? I’ve never seen anything like that anywhere».

In Gallacher’s mind, there are many people, both from today and yesteryear, worth showcasing. «Anything can sit beside anything, everything can have a conversation and language together, I think. There’s that thread that runs through my work». These radically open ideas of what makes design, or a room for that matter, seem so defac to when talking to him. «Modern is something I haven’t seen before, because it’s new to me». Being so discerning, it’s surprising that there are some aspects of Gallagher’s work that elude classification. «A design dealer is what I call myself — it’s ambiguous, but it’s nice. It gives you freedom. I always thought I was going to be an interior designer — which I still might be. I’ve done some interiors, and I’m doing some this year, I’m doing a restaurant — so that’s happening. I hate the word, but I am a curator». What does that entail, you ask? «It’s knowing what looks good together, knowing what works, and what doesn’t. You always start with an empty room, and then you start putting thing in frame — which is to say by viewpoints and different things. You start building up layers, and you do that until it looks right. When I first got this space, I knew it would make a good backdrop to my things, but the beau ty was also already there». The Luigi Caccia Dominioni apartment, in Milan, as part of Salon del Mobile 2020 that never took place. «You’re taking it all from London, you have to plan, otherwise it’s a mess — and the flat, we’ll also navigate like that. The thing is that you find a space, and those are the constraints within the constraints, and all the people I’m taking, I’m a fan of their work».

He freely uses the term collaborator — when so much time, back and forth, is spent refining and sharing ideas — like with Lukas Gschwandtner, which was the culmination of at least a year’s worth of liaising. «I spent a lot of time talking with Lukas about what leathers he should use. The chair over there, when it came in, was canvas and a lot smaller, but now it’s leather and a lot bigger. The metal is a lot stronger and it doesn’t break. That’s why I use the term ‘collaboration’». You’d be wrong to assume that this means his work only ever enmeshed with the minds of others. You do spend a lot of solitary time, a lot of time on your own. «You’re at markets at four o’clock in the morning and you’re thinking while you’re tired, going, ‘oh god, is that piece good?’».

By that token, however, Gallacher knows what he wants and what he likes, so much so that he never sells what he doesn’t like. A process which he recalls as having «stuck to my guns. I’ve told people what’s good, and now people are starting to believe in me. I wouldn’t sell anything that I didn’t think was fucking sensational». There’s a distinct lack in irony or cynicism in the ideas of what he does. «It’s not just about being a brand by making horrid soap dishes with faces on them, it’s wasteful. It’s not remarkable, it’s not interesting, and it won’t last. There’s a lot of that here in London, because its what people like and what the publications pick up, it’s just what sells, for whatever reason — because English people are quite twee, commercially, in a lot of ways. Then there’s so much stuff. I do find the design scene here a bit strange, but then we’ve got a magazine like The World of Interiors. We’ve got creative people in this country. I hope we’re coming out of this kind of saturated, shelly, botanical, Jean Cocteau world that’s almost too lovely».

Much can be said for, not only creating, but curating, tomorrow’s permanence. One gets the sense of a well-heeled understanding. «There’s not massive amounts of waste in what I do, but that I’d like to think more sustainably». After all, the nature of the beast for the preloved market is exactly that, though. Starting out, Gallacher used to live with his items for a time before selling them — back before the showroom when he used to sell out of his one-bed room flat — a kind of halfway house for objets d’art and interiors of note. Though this was a living situation that has since been vetoed and switched up since moving to Lant Street, SE1, the location where he plans to take things even further with the Thursday and Friday night bar schedule being reinstated by the end of April. «The bar is spectacular; all of the shows have been planned out for the year. It’s the perfect space, it’s so nuanced — when it’s the bar it’s this very fun place to sit and have a glass of wine on a chair and get pissed eating olives and crisps». Miranda Keyes, Viola Lanari and Thomas are but a few of the names to look out for on the year’s show schedule, concluding in a cumulative show in November. «The showroom is the reset for the week as my showroom and we’ve got all of these tables that came from an old working men’s club. I’d have just one chair in this room if I could, something pretentious and annoying».

The need to reuse and recycle and slow consumption is as modern as any of the furniture in his room. «Save your money, buy well — not saying one should buy expensive things, either. Go to markets, buy multifaceted things, stools are great and multipurpose. Buy beautiful, and wait. People collect for years, wait until you need it». Gallacher never has something that he doesn’t want or need, he considers that to be the waste. «Don’t buy for now, wait until you find something you love». That said, the most challenging thing about the whole his whole setup is «the competition, markets these days are full of people just buying up everything, and there’s a relatively small pool of items, and a lot of people buying or dealing». But this, evidently a minor inconvenience, is offset by «finding the next best thing, something that you can’t wait to take back and show people. There’s always a new old thing to be found». Though he’s a lover of scenes and movements past, Gallacher assures that «this is the scene today. Just imagine a kind of café society, but with more wine».