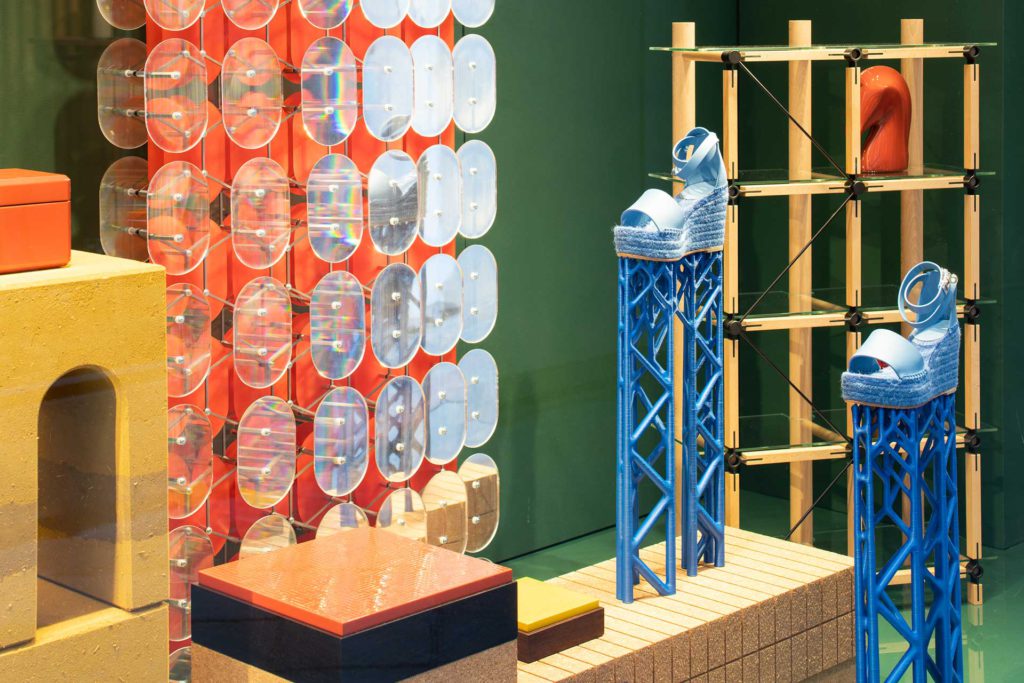 An interview with Mieke Meijer and Roy Letterlé, founders of Studio Mieke Meijer, on their design for the Fundamentals window display at the Venice Biennale of Architecture 2021

Ahead of the Venice Biennale of Architecture, Mieke Meijer and Roy Letterlé discussed their design for the Fundamentals window display which is on public view from 22nd May to 21st November 2021 at Hermès’ San Marco address in Venice for the occasion of the seventeenth Venice Biennale of Architecture. This marks the Studio’s second commission from Hermès, following Bagstage in 2019; an in-store workshop designed to travel from store-to-store. Starting at the Hermès store in Athens, the workshop showcased the twelve-step construction process of the Kelly bag designed by Robert Dumas in the Thirties and renamed the ‘Kelly’ as a tribute to Grace Kelly, the princess of Monaco, after she was photographed carrying the bag in 1956. Letterlé explains how Hermès approached them to create an installation that would aid their customers in discovering the beauty of the Maison’s leather craft. The Studio designed a round table surrounded by a circular configuration of cabinets made of beech wood, fabric and linoleum – which referenced the materiality of the Studio’s Airframe 01 cupboards – each with two doors that opened to form an enclosed and intimate space to host an artisan and workshop participants. The design language of Studio Mieke Meijer, which embraces scalable modular systems built for disassembly, proved fitting for the travelling workshop and Letterlé describes the continued discourse between Hermès and the Studio as a conversation between a French Maison and a Dutch design studio who share an architectural approach to design and production, leading to this second commission for the Venice Biennale of Architecture. Meijer explores, «we use Architecture often as a source of inspiration and what Hermès was telling us is that they see the Kelly bag – and all their products – as a piece of Architecture».

Hermès, which was founded in 1837 by Thierry Hermès as an equestrian harness, saddlery and leather goods workshop at a time when its Parisian customers desired minimalism and celebrated the modern movement, continues to be recognized for its rejection of superfluous decoration across six generations of family ownership. Creating elegant, functional and timeless objects that follow the architectural mission of ‘form follows function’, each component is essential to the making of Hermès’ structurally and materially honest products. From high quality, responsibly-sourced raw materials to the architecture of its forty-three production sites, including seventeen leather ateliers which Letterlé describes as «human-centered manufacturing», the Maison operates in the domain of excellence following an artisanal model that respects humanist values. At Hermès, craftsmen make up one third of the Maison’s 16,000 person workforce, with Hermès’ Italian press office expressing the Maison’s joy at working with Meijer and Letterlé who they also consider to be craftsmen, enthusing «we share the same empathy, the same approach to human relations». At the core of Hermès is design for longevity, repair, and disassembly, which are among the most effective strategies when it comes to sustainability. Meijer explores the way in which Hermès’ artisanal production process, whereby one craftsman works on each piece from start to finish, creates value through emotional connection. It is by virtue of this excellence of craftsmanship and quality that the price of Hermès products encourages consumers to commit to longevity and repair with Meijer explaining Hermès’ repairs policy: «let’s say something happens to the bag – you can return it to Hermès and they will try to let the craftsman who built the bag also repair it and that’s beautiful». Letterlé explores the role that price plays in responsible design further, hypothesizing, «if something is cheap and readily available, it becomes a disposable product and price is a factor in that whether you like it or not». To buy an Hermès product is to invest in a piece that will last a lifetime, more often than not increasing in value over time to become a collectable object that can be passed down the generations. Whilst Meijer and Letterlé aspire to more universal products, they hope «the things that we design as a Studio will also stay for a long time in the homes of people that buy them».

Venice Biennale of Architecture 2021 – How will we live together?

The Venice Biennale of Architecture is a biannual exhibition held in Venice, Italy, that hosts architects and designers from around the world to showcase innovative architectural solutions to contemporary societal, humanistic, and technological issues. Meijer describes the theme of this year’s Biennale – How will we live together? – as «a dynamic question that is changing, or maybe it is the answers that are changing», whilst Letterlé adds, «every generation has to answer that question for itself». After interrogating Hermès’ core values – looking at aesthetic, traditional, environmental and social values – Meijer and Letterlé identified Hermès’ environmental integrity as that which resonated most with both the theme of the Biennale and Studio Mieke Meijer. Letterlé explains, «we looked at the three parties involved: the Biennale, Hermès, and ourselves, asking ‘Where can we find a common ground?’ That’s the starting point for any discussion, to analyze each other’s positions and have a discussion that’s about substance». As creators of objects, both Hermès and Studio Mieke Meijer recognize their responsibility in the ethical management of the materials and resources that build the society in which we live and found their substance in discussions on sustainability.

Meijer describes the Fundamentals window display as a sustainably responsible «servant to the collection of Hermès». Known for their creative window displays, the Director of each of the Maison’s 306 stores across forty-five countries enjoys the purchasing freedom to create a one-of-a-kind «house of objects» that combines the Maison’s identity with local culture. Studio Mieke Meijer’s design resonates with this «house of objects» characterization, displaying an assembly of nine unique structures. From Hempcrete, rammed earth and cork to acrylic, anodized aluminum and 3d printed elements, the scenography is a celebration of sustainable construction materials and building innovations. Reflecting primordial and futuristic architectural references, the playful forms support a curated selection of Hermès products. Positioned on the far left of the display is a Hempcrete pyramid supporting a special edition of the Kellywood bag; a seamless structure that extends the angle of the bag’s trapezoid shape. Following the pyramid’s display in the Hermès store window in Venice, the structure will be resold to a third party or another of Hermès’ international network of stores until it has no further useful application, at which point the biodegradable material will be decomposed in moist conditions. Each structure in the window has an equally thoughtful plan for its life after display, including the resale of products or components to both Hermès and Studio Mieke Meijer, the disassembly of the beech wood and acrylic panels into end-grain cutting boards and lighting product diffusers, the recycling of acrylic, aluminum and Green Tech filament and the biodegrading of cork, beech wood and rammed earth materials.

With waste as one of the biggest issues facing visual merchandising, in this way Studio Mieke Meijer directly address disposability and reframe the idea of a temporary display as a material bank; a combination of products, components and materials that are waiting to go on to a useful afterlife. Letterlé asks, «if you look at a window as a material bank, what would the next step needed be? Because it wouldn’t be enough to just say, ‘Okay these are the materials that are there’». He continues, «how do you make sure that what your intentions are when you design it, are actually realized when the product is at the end of its life, so to ask that meant that we had to look at who takes responsibility for what». Citing Thomas Rau of RAU architects – a German architect who together with Sabine Oberhuber authored Material Matters in 2016 and founded the Madaster Foundation in 2017, which was established to promote a circular model for zero future construction waste – Letterlé credits him for the development of the material passport, a concept that has been adopted by Studio Mieke Meijer for the Fundamentals window display. Looking at each element through three parameters – on a product level, a component level, and a material level – the responsibility for the afterlife of each element from the window display, as detailed in the former examples, has been pre-determinately shared between the Studio and Hermès. This is common practice for Studio Mieke Meijer, with Letterlé asserting «we take responsibility, period. If you have a product at the end of its life, you return it to us and we will take care of it». He sees the purpose of the material passport as «a communication tool with a client to find that common ground, to see where the overlap is and where we can create value in that process». Meijer adds, «the whole concept would create more impact if it was adopted by other design studios as well, because then you could also exchange products, components or materials in different contexts».

Studio Mieke Meijer is a Dutch design studio that was founded by Mieke Meijer and Roy Letterlé. Operating between the fields of architecture and design in the public and private domain, the Studio utilizes the design language of scalable modular systems that can be disassembled and tailored to different environments for the design of durable and long lasting ideas and products, including their 2012 Frameworks oak wood, glass and steel shelving units, 2014 New Hybrids NewspaperWood veneer, oak veneer and steel chair and 2016 Space Frames plywood, polyester fabric and LED tubing architectural lighting solution which has also been adapted for public installations in London and Shenzhen. Meijer, who graduated from Design Academy Eindhoven, and Letterlé, who graduated as a structural engineer from PTH Eindhoven, now lecture and run workshops at the Design Academy Eindhoven and HKU University of the Arts Utrecht and are also co-founders of NewpaperWood BV, a company that reverses a traditional production process; not from wood to paper, but from (news)paper to wood.