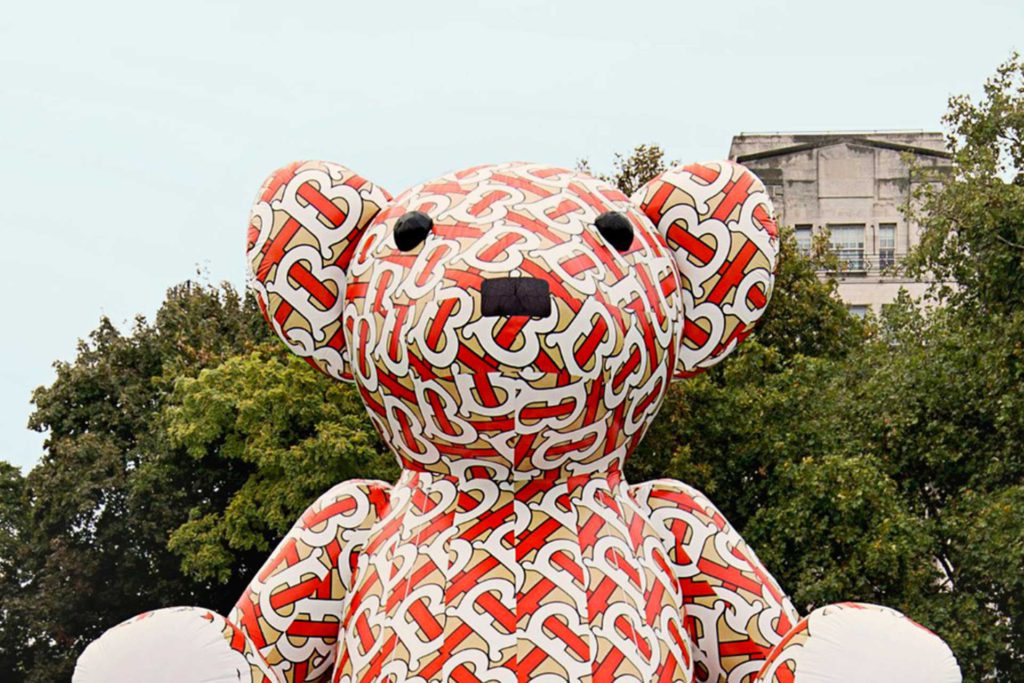 From the language of wartime economy to modern experimentations: how Burberry trench coat underwent changes over the last hundred years

Riccardo Tisci presented his own edition of a trench coat with an elastic belt in chocolate brown, worn over a monogramed blue shirtdress. It reflected the subcultures that comprise Britain and uniting them on the runway. Weeks before his first show, Tisci had hired graphic designer Peter Saville to rebrand the logo and redesign its monogram for the first time in twenty years, as well as recruiting Vivienne Westwood to collaborate on a capsule collection, which could «celebrate the beauty, the avant-garde and the real individualism these people represent – the brain of England». His Kingdom debut collection performed Tisci’s own eclecticism, speaking to different facets of the society, bringing his streetwear sensibility onto the runway. The creative director’s appointment didn’t just mark a change in style, but in strategy, too. Targeting to younger customers, with an injection of youth into the veins of the house, allowed the brand to appeal to a young generation market: «I want to sustain the Burberry heritage» explains the designer «I also want to go with the times, with modernity. The product has to be more democratic». The designer’s strategy speaks to digitally driven consumers, tapping into the younger retail, which takes Tisci’s designs straight to the digital platforms these generations frequent. Since joining Burberry, Tisci has gravitated towards the eccentricity intrinsic to the house’s style codes. Even in his Femininity collection, he channeled mother nature with a reinterpretation of the classic heritage Burberry looks with a modern touch. The tartan, a distinct signature of the house was envisioned with cutouts and deconstructed; animal print trench coats as emblems of the power of feminine energy: «A modern armor that captures its characteristic fierce aura» Tisci explains. The clothes look to tradition, without being constrained by it; Burberry house codes, like British tailoring classics are rethought in a contemporary way – one that feels relevant to the times.  Today the label stays true to its roots while modernizing the traditional trench, but a hundred years after the outbreak of the World War, its beginnings on the battlefield shouldn’t be forgotten.

The Victorian Age. People were searching for different ways to improve the quality of their life, from generating energy to reducing the risk of contracting illnesses because of chill nights. No central heating could warm up people, who started wearing newspapers, spreading them over the chest and under the overcoat to survive the cold. Over time, military history drove companies to employ the language of wartime in the promotion of their protective garments. Changing the military body with ideas of leisure, Burberry let the history of its trench not to be confined to the army use, giving the garment the design of a practical and mass-produced clothing. Born in 1835 in Brockham, a small village, the English dressmaker Thomas Burberry founded the brand in 1856. Son of a farmer and a grocer, he developed the art of tailoring working as an apprentice draper with a penchant for outdoor sportswear. “Burberry & Sons” in the Hampshire Basingstoke city was known for the strong fabric items inspired by metropolitan ideas while capturing the importance of the appropriate working uniform for grocers and farmers. For over hundred years Burberry’s visual identity has been portrayed by an equestrian along with his charging horse. The logo hasn’t changed much throughout the century until 2018, when the company decided to remove the equestrian from the emblem. One of Burberry’s first proposal was a loose linen smock that farmers could wore all year-round: it was cool during summer yet warm in winter. Its looseness allowed for the circulation of air without inhibiting movement, resulting comfortable and easy to wear.

The invention of the Gabardine

In the period leading up to the war many companies tried to develop techniques for waterproof dresses, originally conceived for recreational activities, such as bicycling, riding, and hunting. By 1897 Thomas Burberry had invented the Gabardine, the world’s first waterproof fabric, revolutionizing rainwear. In 1988 he patented it, making Burberry’s its only stockist. The appeal of gabardine laid in its functionality. Before its invention, traditional weatherproof fabrics were waxed or rubberized to repel water, making them heavy and rigid to wear. Shelter from inclement weather the original fabric was worsted wool, in combination with cotton, using lanolin before weaving. Both civilian and military audiences were attracted by sport items, and even before the outbreak of war, Thomas Burberry’s visual design explored the pleasure of outdoor leisure, promoting a ready to wear garment to middle-class consumers. In May 1917 a first image of the trench coat appeared in newspapers: a weatherproof coat reaching below the knees and tied up to the neck. A caption described the functionality of the coat: «War is work, and the essential feature of the Field Jerkin is that it is built for work. The roomy coat gives you freedom while ventilation is completely provided for». Since that moment, Burberry traded on connections it had established between the design of sportswear and the supply of military clothing.

Burberry and the World War I

Burberry became the apparel provider for British soldiers during the World War. The British war office desired a new uniform coat that would see the military through the war effort. Burberry designed a trench focusing on the physicality of military work, while promoting it as a scientific solution to the problems for men enduring trench conditions. The khaki uniform was not only used to transform men from civilians to working soldiers, but it offered protection from the most forbidding weather conditions, which was an official concern raised in Parliament in February 1915. Details that set the Burberry trench today come from its militaristic roots. With a deep yoke, button-down flaps and sizable pockets, they kept out water, a significant improvement on the heavy military coats of the time. The pleat at the back, revealing a slither of the signature check lining was added to make movements easier for soldiers when riding horses. On the shoulders, the epaulettes let officers show their rank, while the deep pockets allowed for the discreet transportation of essential papers. Wartime in Britain promoted army clothing which encouraged increased social mobility; economy drove advertisers to use the visual language of the war to sell clothing with a transformative role. The original trench was long, hit at the ankles and featured epaulette, buckles, storm flaps and the bel’s metal D-rings used to attach equipment. Ten buttons decorated the coat with five on each side. In the 1920’s, check print in red and beige started to line the coat. The trench was only available to officers that became synonymous with an air of rank; when soldiers returned from the field, there was the idea of patriotism and heroism that people wanted to buy into. Over the years the demand increased so fast, and the gifting of the trench coat was considered one of the highest honors.

Burberry’s image of the outdoor man in a trench coat was that of a civilian in a military uniform, an image that sold products during British wartime, while making the trench an enduring design. During the Twenties, Burberry’s style developed as men’s clothing ceased to rely only on images of leisure; the figure of gentlemen was modernized, promoting the simplicity of the middle class, whose duty relied on balancing the roles of citizen and worker. The trench coat became a symbol for a new kind of body which crossed tradition and the contemporary world, with all the changes it underwent. The equestrian knight logo and black, camel and red Nova check became signatures of an item that was becoming rapidly popular. Having been rooted in military campaigns, the coat took a different direction which would shape its social perceptions in decades to come. Since the 1950’s the Burberry trench made its way onto the silver screen, worn by Audrey Hepburn, Humprey Bogart and Marlene Deitrich. These roles, along with their establishment in the military made the trench an item which incorporated design with function.

From Christopher Bailey to Riccardo Tisci

Since the Nineties, Burberry has been breathing new life into the trench, including bright colors, prints and fabrics as satin, lace, vinyl and python skin. Christopher Bailey arrived at Burberry as creative director in 2001; the brand didn’t know how to ditch the undesirable part of what Burberry stood for, without losing its recognition. As a designer Bailey’s achievement was to reinforce Burberry’s heritage and the British culture while making it central to the brand storytelling. During his seventeen years at Burberry, Christopher Bailey was responsible for transforming the heritage into a retail phenomenon. He took his experience at Gucci and Donna Karan and began to merge his design with technology; he deployed a digital arsenal to transform the way the brand spoke to its consumers. Throughout the years, Bailey came up with thirty-five trench variations, from the 2009 dip- dyed in coffee trench to the pink trench with ruched sleeves. The designer took over the design department and turned the company around; in his 2012 collection, inspired by artist Henry Moore, Bailey experimented with natural fabrics and textures creating a striped trench with a black belt with bright yellow trim. The designer brought his British cultural nostalgia to build out a different identity for the brand, as his 2013 trench coat revealed: a two – tone metallic trench in blue shades. His crystal-encrusted pastel lace trench, as well as the coat with its leopard mutton sleeves and ruffled white shirt underneath are concepts more detailed of a heritage: «We were born from a coat, that is the soul that is the DNA of our brand. Our greatest challenge was how we leveraged this heritage category» said the former Burberry CEO Angela Aherendts. In 2018 Riccardo Tisci began his role as creative director of the British brand, redesigning the trench, whose adaptations are reminiscent of the original design. For his debut collection, the designer presented a 134-look runway show that merged Tisci’s own aesthetics with the Burberry brand’s 162-year heritage and tradition, in a muted palette of beige, red, black and mint.

First designed at the end of the nineteenth century, Burberry trench coat became a worldwide recognized garment appearing in movies and popular culture. Wartime social and economic changes made the trench coat a symbol for a new body, merging tradition and modernity, incorporating military and civilian. From Christopher Bailey to Riccardo Tisci, Burberry’s contemporary design.