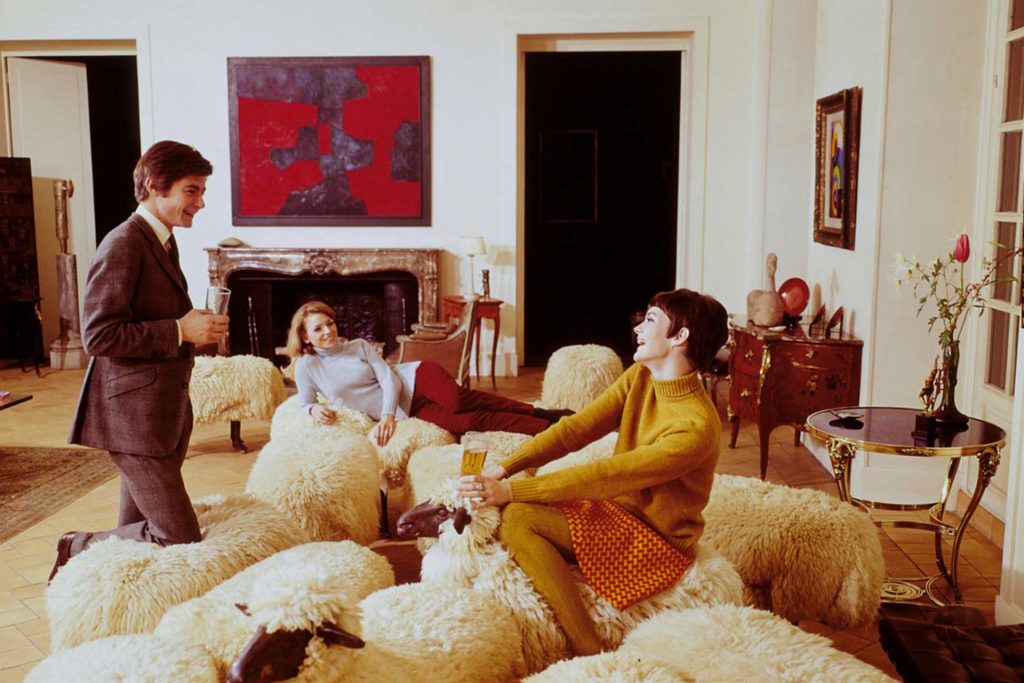 Les Lalannes — originality in an era of covers and revivals

For François and Claude Lalanne, a hippopotamus becomes a bathtub. Whether at an exhibition or an auction, this is how collectors’ obsessions start

They were a little out of fashion—some ten years ago—when Ben Brown, a dealer in London and Hong Kong, at TEFAF Maastricht, decided to show on his stand the animal-furniture by Les Lalanne, their Ovid-like metamorphoses translated into a metal alloy. Perhaps this was the start, or maybe it happened a year or two later, of the obsession for a whole host of collectors for the duo François-Xavier and Claude Lalanne, partners in life and work. A universe of surreal-pop animals and plant and flower shapes cast in an alchemist’s melting pot. Les Lalanne set themselves no limits. They were capable of inventing the choupatte, a hybrid creature, a large horse with chicken’s feet, turning a rhinoceros into the Rhinocrétairebrass writing desk, or a camel into a sofa. A hippopotamus managed to become a bathtub, the Gorille de Sûreté had a safe box inside it, while a seagull with a gilded beak contained a cocoon bed that would have been perfect for Rapunzel of Brothers Grimm fame. Brown allowed these sculpture furnishings to dialogue with the alphabetical charades of Boetti and the hyper-geometric and chromatic abstraction of Albers and the effect was alienating. There are also those who have followed Les Lalanne, adoring them and supporting them right from the beginning, like the legendary Parisian interior designer, Jacques Grange. At the 2009 auction that sold off the contents of the Parisian home of Yves Saint-Laurent, their creations received the seal of approval thanks to sky-high starting prices. Claude said she was taken aback by becoming an icon. She repeated this often and, amused, would add that she was happy that objects made for their dear friends Saint-Laurent and Bergé had met with such huge success. The rest was achieved by the retrospective curated by Peter Marino at the Musée des Arts Décoratifs, in Paris in 2010. Also to be considered is the role played by their three gallerists, Ben Brown, obviously, the New Yorker Paul Kasmin and, since the eighties, Jean-Gabriel Mitterrand in Paris.

Tout revient. We live in an era of covers and revivals. Sometimes quite blatant and repeated ad nauseam, but more often than not passed off as something new, as if neither memory nor tomorrow existed. In the sixties, François-Xavier, who died eleven years ago, and Claude Lalanne, a husband and wife team who shared the same creative path since 1956, became a must. They seduced the palates of collectors and big-name amateurs, including Rothschild and members of the Agnelli family. Gianni Agnelli ordered at least twenty moutons from them, white sheep with burnished bronze feet and faces, a flock that stands out in photos of the Milanese apartment designed by Gae Aulenti. Aficionados also include the Viscountess Marie-Laure de Noailles, an active ideologist through to the very end. Their first fan would appear to have been the German photographer, entrepreneur, astrologer and playboy Günther Sachs, who was, from 1966 to 1969, Brigitte Bardot’s third husband. Married since 1967, Les Lalanne were an enclave in the artistic debate of their time, but they then pulled out, playing on a different, image-rich line that owed everything to the imagination and their passion for the world of nature. In the preview of a recent Sotheby’s auction in Monte Carlo, a tiny gilded metal chair, signée Lalanne, a weave of bamboo branches run through with leaves and worthy of one of Perrault’s fairies, looking even more diminutive among Mannerist paintings and pieces by Robbia, grabbed the attention of those present, as an object of desire. Similar to what recently happened with the spreading of Gabriella Crespi-mania, involving another figure who was half-design, half-art in some ways, and shared various similarities closer to the poetry of Les Lalanne.

Maria Grazia Chiuri remembers Claude Lalanne with fondness and admiration. For her first Haute Couture collection as creative director at Dior, which showed at the Musée Rodin inside a formal garden maze in January 2017, Maria Grazia asked Claude to design the jewelry, butterfly, flower, and mistletoe shaped necklaces, teamed with snake or similar shaped belts, interwoven with poetic brambles. Jewels that told stories suspended between nature and sacredness, gliding between myth and metamorphosis. “I visited her several times at home, in a Hausman-type building on Boulevard Raspail in Paris and in the atelier near to Fontainebleau,” says Maria Grazia Chiuri, “to see her at work. Claude was hypnotic, concentrating on her hands as they bent, shaped and engraved the metal as if it were tissue paper. Such surprising strength and precision, especially in a woman of more than ninety. She would make lost-wax casts, with the help of two of her grandchildren, drawing out true magic. She entrusted it all quite confidently to inspiration, embracing the suggestions that came to her from matter and spur-of-the-moment flair”. The world of nature—that surrounding the laboratory-study in Fontainebleau—provided continuous inspiration. Claude confessed that sometimes she simply immersed vegetables and plants into a hot electroplating dip, turning them into golden and silver objects. Such was her love for nature, inherited from a father who, as she liked to repeat, constantly sought the philosophers’ stone.

For Dior, the Lalanne duo conceived the decor for the boutique on Avenue Montaigne, when the fashion house was run by a still young Yves Saint-Laurent. Later, in 1965, Les Lalanne made an egg-shaped bar for Saint-Laurent’s home, initially used in Palace Vauban and then, from 1970 in the library on Rue de Babylone. In his Parisian home on Rue de Babylone, Monsieur Yves and his partner Pierre Bergé called on the couple to invent a music room. Somewhere to be used at night, with a crepuscular, Proustian feel to it. Mirrors illuminated solely by candle light, brought alive by dancing interwoven plants and ribbon-like lianas, in galvanized copper and bronze. In an interview in Beaux Arts, Claude said that she had refined her skills of observation in the garden of her property, somewhere that provided her with a source of inspiration for conceiving her lamps, cages and mirrors set with the patterns of plants and lianas. In Tangiers, in Villa Mabrouka, which now belongs to Jasper Conran (the name means ‘luck’ in Arabic) and which was the second Moroccan nest of the St. Laurent-Bergé couple, a slab of mirror framed by vegetation hung over a marble fireplace.

An Amazon-style bodices in gilded metal, a real cast made by Claude of the breasts and torso of Veruschka, were teamed with chiffon dresses in black, Ashanti brown and Klein blue. Appearing on the runway at the YSL Fall-Winter 1969 Haute Couture show, they caused a sensation. The barricades in France in May 1968 clashed with goddesses or female warriors of Hellenic imprint, advancing bearing golden armor that cinched the waist and imprisoned the fluttering lightness of silk. But then, YSL was known for his mantra-like provocation. For Maison YSL, Claude also created sculptured pieces of jewelry in galvanized copper. She sourced her material, explored its every reflex and possibility. In 1976, at the Whitechapel Gallery in London, she and her husband showed a box of sardines. Pop was all the rage at that time, almost Warhol in style but with hints of Liberty and the Orient in its poetry, for example in the Tables-Lotus. An abstract, sacral mood would emerge at times. References for François-Xavier were the pharaohs’ Egypt, Pompon, and touches of Brancusi, his drinking companion who had a neighboring studio in Montmartre. There are thrones of branches topped by huge Ginkgo Biloba leaves, the sinuous Bambiloba chairs, faldstools with hanging crocodile skins, wild boar full of foliage. The Singe Douche, Lapin Polymorphe, minotaurs and centaurs in bronze by François-Xavier, with their characteristic Minoan feel. The Histoires Naturelles is a series in bronze and glass paste. All-white ostriches hold in their beaks the top of a console table that, in the center features an egg of Pierfrancesco-style memory, the cutlery is like something out of a fairy tale, and plant elements bloom. The sautoirs prickle with symbolic thorns.

Born Claude Dupeux in 1925, she studied at the École des Arts décoratifs in Paris, and right from the start of her career she tried to combine business with pleasure, bringing together function and sculpture. Her first husband was the architect Jean Kling, with whom she had three daughters. In 1952, she met François-Xavier, from Agen, two years her junior, who had just completed his studies at Academie Julian. Claude adored flowers, François animals. They soon became Les Lalanne tout-court, each working independently, but under the same name. The production process was quite distinct: moulage and assembly were Claude’s jobs, whereas design and construction were the responsibility of François-Xavier. These two complementary universes came together and in the end remained quite separate. Claude and her classic architectonic with the organic, Baroque approach of François. They started out by producing ornamental objects for the Printemps department store and for theatrical stage sets, where they immediately made a name for themselves. Their clients often passed off these creations as their own work, something which caused Les Lalanne much discomfort in the beginning. Together, following advice from the American sculptor Jimmy Metcalfe, they decided to present themselves as artists. They became stars. They showed at the galleries of Jeanine Goldsmith. Jean Tinguely and Niky de Saint-Phalle, with whom they were very close, and were introduced to the Greek merchant Alexandre Iolas, whom they worked with until his death. At the Galerie Goldsmith, Claude was complimented by Salvador Dali and his wife Gala for an Arcimboldo-style clock with an onion inside, which gained her entrance to their private life at the Hotel Meurice.  L’Homme à la Tête de Chou, a sculpture of hers in 1968, inspired an album by Serge Gainsbourg. The Lalannes’ closest friends included Karl Lagerfeld whom Claude portrayed, and Marcel and Teeny Duchamp. Peter Marino commissioned the Lalannes with pieces for private homes that he was furnishing, as well as a round bench with a hole in the middle to be filled with blue hortensias, for Dior on Avenue Montaigne. The Lalannes also lent their talent to the Chanel boutique in Rue Cambon. “Her personality was built like a fortress against bad taste and pretentiousness”, stressed Jean-Gabriel Mitterrand, Claude’s gallerist in a tribute paid to her on her death. He organized her only solo exhibition, inaugurated in May 2018, followed by one dedicated to François-Xavier, from the following 1 June to 28 July. “She would use her humor to dispel any form of mediocrity and gave neither the avant-garde exegetes or fleeting artistic whims a chance.”