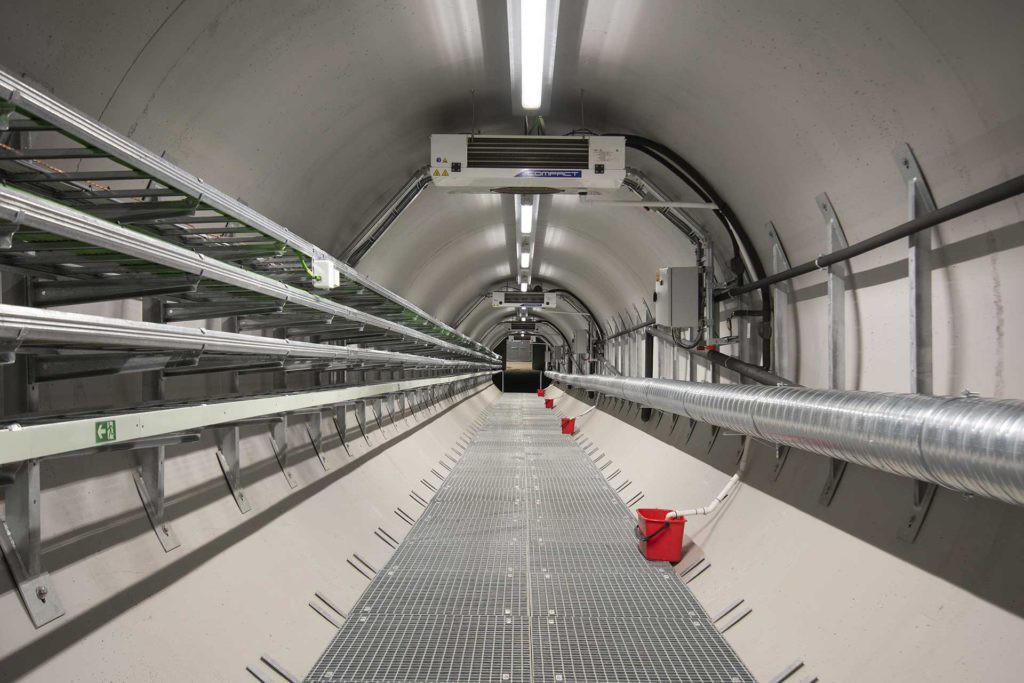 «Unlike the first gene-bank established on the island, the current vault is not located in a coal mine to avoid risks related to the presence of coal and gasses»

Svalbard Global Seed Vault is a seed bank located on the Norwegian island of Spitsbergen in the Arctic Svalbard archipelago, halfway between mainland Norway and the North Pole. This long-term seed storage facility stores duplicates (backups) of seed samples from the world’s crop collections. There are about 1,700 gene banks around the globe that store edible crop seeds for safekeeping. Natural catastrophes, military conflicts, lack of funding, and poor management can make these gene banks vulnerable, exposing their samples to potential loss. Svalbard Global Seed Vault safeguards global agriculture against the loss of seeds in other gene banks during global or large-scale regional crises. Thanks to its location, it can ensure the safekeeping of food crop seeds in the face of climate change and the consequential biodiversity loss for centuries to come. The Norwegian Ministry of Agriculture and Food, the Nordic Genetic Resource Center (NordGen), and Crop Trust manage the seed vault.

The Norwegian archipelago of Svalbard in the Arctic Ocean is composed of nine principal islands, located between longitude 10° and 35° E and latitude 74° and 81° N, around 930 kilometers north of the city of Tromsø in northern Norway. With its area of 39,044 square km, Spitsbergen is the largest island in the archipelago and the location of Longyearbyen, the largest settlement on Svalbard and the world’s northernmost urban community. The Islandske Annaler states that Svalbard was discovered in 1194. Dutch navigator and cartographer Willem Barentsz rediscovered the archipelago in 1596 while on his quest to find a Northeast passage. In 1611, whalers established a base for hunting the bowhead whale in Spitsbergen. As the practice of whaling declined in the nineteenth century, Svalbard began to center around the presence of coal on the archipelago, its role as a destination for Arctic tourism, and a base for Arctic exploration. The territory of Svalbard, known pre-1920 as Spitsbergen, meaning ‘sharp-peaked mountains’, didn’t belong to any nation, but its international industries called for laws and regulations. In 1910, discussions to establish Svalbard’s sovereignty began but were cut short by the outbreak of World War I. On 9 February 1920, 14 High Contracting Parties signed the Svalbard Treaty, granting full sovereignty over the archipelago to Norway. Svalbard is located 1300 kilometers beyond the Arctic Circle, in a geologically stable area in the permafrost. Two-thirds of the surface of Svalbard is protected, and about sixty percent of the archipelago is covered with glaciers. The average temperature span between minus fourteen degrees Celsius in winter and six degrees Celsius in summer, with low humidity year-round. Svalbard’s location, climate, and geography allow the Svalbard Global Seed Vault to safeguard thousands of varieties of essential food crops like wheat, rice, and beans even in the event of natural or human-made emergencies, such as ocean floodings or power shortages.

The need to preserve the genetic pool of edible plants stored in the world’s gene banks, is what brought about the Svalbard Global Seed Vault. This seed vault serves as a backup storage facility and is the world’s most extensive secure seed storage. The vault has a storage capacity of four point five million crop varieties, which would allow it to store duplicates of all the seeds kept in the gene banks worldwide and to safeguard the seeds of new varieties collected in the future. Following the principles established by The FAO Commission on Genetic Resources and the FAO International Treaty on Plant Genetic Resources, the Norwegian government funded the Svalbard Global Seed Vault, opening it in February 2008. The operations’ responsibility was assigned to The Ministry of Agriculture and Food, which cooperates with the Nordic Gene Resource Centre and the Global Crop Diversity Trust. A dedicated international council established to advise the Seed Vault provides the actors with guidance. «The Nordic gene bank was looking for a safe place to store copies of the seeds from the Nordic Seed Collection, and in 1984 they selected a coal mine in Svalbard. By the early 2000s, the idea of storing seed duplicates in permafrost was getting traction on an international level. When in 2004 the International Treaty on Plant Genetic Resources for Food and Agriculture became effective, Norway was asked to establish whether they would be able to build a facility to store seed copies from other gene banks». Svalbard Global Seed Vault(SGSV) Coordinator Åsmund Asdal explains. «Norway was able to do so, as they showed in a report which caught the attention of several gene banks around the world that wanted to send duplicates of their seeds to be stored in a safe storage facility. Svalbard had the pre-existing infrastructures and services needed for a location to host a facility of this kind. Unlike the first gene-bank established on the island, the current vault is not located in a coal mine to avoid risks related to the presence of coal and gasses». At the opening, the Svalbard Global Seed Vault contained 278 000 seed samples. In April 2020, it held more than one million seed samples. They belong to almost six thousand plant species and more than one thousand genera. Eighty-seven international depositors have deposited their seeds duplicates in the Svalbard Global Seed Vault for safe storage, like the Africa Rice Center (AfricaRice), the Australian Pastures Genebank (APG), and the Centro Internacional de Mejoramiento de Maíz y Trigo (CIMMYT). The largest national depositors are gene banks in Canada, Germany, the Netherlands, and the USA. NordGen, northern Europe’s leading gene bank, is the largest regional depositor. The Seed Vault stores seed duplicates shared under Article 15 of the International Treaty or the Multilateral System and seeds originating from the depositor’s nation.

Architect Peter W. Söderman at Barlindhaug Consult AS designed the Svalbard Global Seed Vault, located around four kilometers from Svalbard Airport in Longyearbyen. The vault is situated 120 meters deep inside the rock base of Platåfjellet ‘Mount Plateau’ at 130 meters above sea level, in the permafrost, at a temperature of minus three-four degrees Celsius year-round. The vault’s total area is 1000 square meters, built by Leonhard Nilsen & Sons. The building’s section visible from the outside is the concrete entrance lobby, decorated with ‘Perpetual Repercussion’, an artwork by Norwegian artist Dyveke Sanne. Thanks to the use of reflective mirrors, prisms, and stainless steel cut into triangles of various sizes, the installation catches and reflects the light, morphing its colors in line with the season, increasing the facility’s visibility from a distance during daytime and night-time. The facility’s present owner and contracting client is Statsbygg, the Norwegian public construction agency responsible for the vault maintenance and technical operations. The seeds stored in the Svalbard Global Seed Vault include crop varieties, landraces, and wild plants that could act as gene donors for new crop varieties. The seeds can be withdrawn from the seed vault by the institutions that deposited them under the so-called ‘Black Box System’. The seeds are brought into the vault packed in crates that contain a maximum of 400 seed samples, each sample consisting of about 500 seeds sealed in an airtight aluminum bag. Three identical, separate rock vaults measuring nine-point-five by twenty-seven meters each compose the Svalbard Global Seed Vault. Inside of it, the seeds are stored in custom-made three-ply foil packages, sealed inside boxes placed on shelf racks. To maintain the metabolic activity level low and allow the samples to remain viable for a long time, the vault’s temperature is kept at minus eighteen degrees Celsius. «The surrounding permafrost refrigerated the seed bank established in the 80s, keeping the temperature inside the facility at minus three or minus four degrees Celsius. We instead have an artificial cooling system inside the facility to keep the seeds at the same temperature they would be stored at in a regular seed bank, as it is beneficial for seeds to be stored frozen».

Ensuring genetic diversityNational, regional and international seed collections and gene banks ensure genetic diversity in the agriculture sector by granting that seed samples remain available to farmers, researchers, and plant breeders. The seed samples sent by nations and institutions to the Svalbard Global Seed Vault remain their property once they are deposited. The seeds are accessible to researchers and agricultural professionals following relevant national and international regulations, including the International Treaty for Plant Genetic Resources for Food and Agriculture. The seeds deposited at the Svalbard Seed Vault can be utilized to recreate plant varieties whose seed collections were lost in the local seed bank. «Plant breeders improve agriculture by developing new plant varieties that are better suited to face the changing climate, are resistant to certain diseases, and are more high-yielding. Farmers no longer cultivate the same varieties they farmed twenty years ago. Plant genetic resources and the diversity within these species are what plant breeders and researchers need to upgrade agriculture. If these elements are lost, plant breeders and researchers will lose the genic codes they need. It is crucial for future food supplies that we preserve plant genetic heritage».

Norwegian agronomist and biologist, he works for the Nordic Genetic Resource Center (NordGen) as the Coordinator of the Svalbard Global Seed Vault (SGSV).