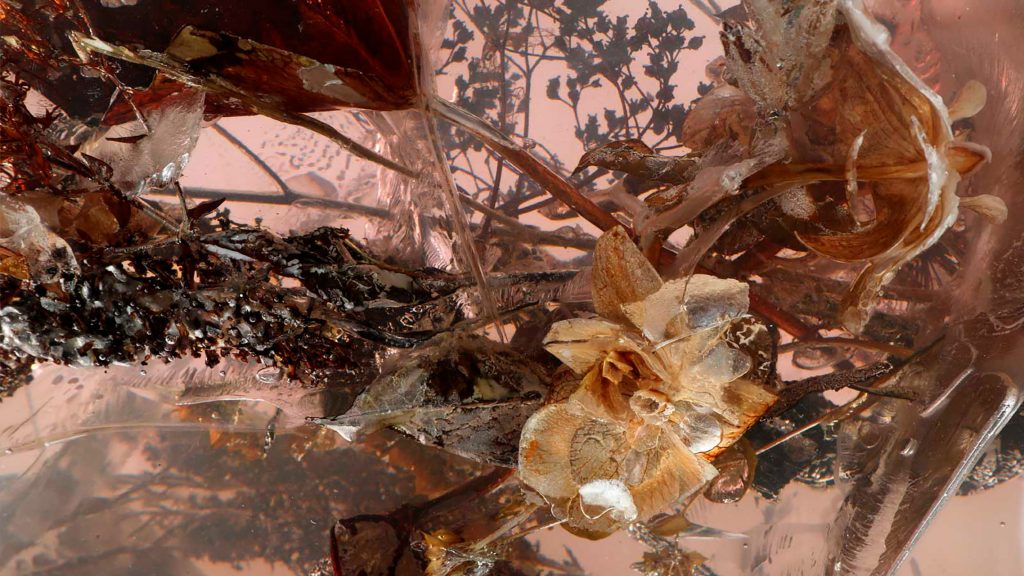 Marcin Rusak cultivates and observes objects, allowing them to decay rather than replacing them. «Placing value on how they change prevents them from being disposable»

Marcin Rusak grew up in Warsaw and comes from a dynasty of florists and horticulturalists based in the city. The family business dates to 1900. Rusak’s grandfather managed a complex of greenhouses and gardens in the city centre, where he would experiment with cross breeding different species of flowers that he had imported from around the globe. The business collapsed around the time Rusak was born, in 1987, when the Soviet Union began  to disintegrate. He attributes his fascination with using flowers and plants as a material to his childhood «I grew up in this post-industrial landscape of greenhouses with pipes sticking out, and a garden of beautiful trees and plants. As a child growing up, it was my playground, but I didn’t really appreciate its meaning». Eventually the family had to sell the facility and move away. It was not until Rusak moved to London as a student at the Royal College of Art that he rediscovered his family history and his heritage of working with flowers. «One of our projects was to find an object from your family or your past that has a lot of meaning to you. I chose a 16th-Century Dutch cabinet that belonged to my grandfather. It was carved with\motifs and symbolism about the changing of the seasons. I started to investigate it, and it stuck with me».

This formed the root of the values that now underscore his studio’s work. «One thing led to another: I went to the wholesale flower market in Vauxhall, in south-west London, and started picking up the waste there to process it and use it as a material». In one instance he produced textiles by pressing the remnants he had gathered onto fabrics, resulting in prints that retained the silhouettes and colours of the source materials but that faded away over time. «I started using flowers as a medium to contemplate other things. I took something already dead, that was grown \for our pleasure, and turned it into a print that would remind you of what these flowers really mean to us. They disappear and decay again, and that ephemerality creates a link with the person who observes it». Another aim of his work is to draw attention to the issues associated with the materials he utilizes, which most people take for granted, and to engage the viewer in these debates. Reflecting on the wholesale production and sale of flowers, he sees parallels with the food industry. «When it comes to the food industry, people are much more aware of where the products come from and how they’re sourced. Four or five years ago the flower industry was rarely talked about. With flowers, you’re not eating them so you don’t care, but they are grown in China or Africa or Latin America and flown all over the world, leaving behind a carbon footprint».By drawing on each side of the dichotomy of the natural and the man-made, Rusak begins a process of research and experimentation that gives rise to the projects and series he and his studio produce. «We find interesting pools of inspiration either within industry or through nature and the materials themselves, and then we try to develop them into something. There is rarely an end goal.. Only a fraction of the avenues that we pursue become something, maybe an installation or a sculpture, or they might be used as a material within our objects. We could be investigating something and have a breakthrough only after two years of work».

An example of a project that comes from the industry side of the studio’s research is Protoplasting Nature, in which the leaves of different plants are preserved by being encased in metal. The process Rusak uses originates from the shipbuilding industry. The idea came to him from a conversation with a metalworker who had been helping him constructing frames for displaying his materials. «The technique was developed for ships and metal bridges and is used to coat them with an anti-corrosive layer. You can not take a ship and dip it into a bathtub of zinc, but you can invent a machine that allows you to spray zinc over the ship’s hull. We discovered that you can actually use this technique on very fragile things like leaves, because the zinc is not hot,does not  give off fumes and is quite sustainable». Applying the technique in this way results in what appears to be a metal cast of the original leaf, but is in fact a shell containing it, intact and still alive, left to rot away without the viewer seeing. The pieces are spliced and grafted into furnishings that are an inversion of his grandfather’s cabinet, being natural resources that are made to mimic a man-made object rather than the other way round. For one series, he and his team arranged the leaves over wire frames and left them to shrivel, leaving husks pulled taut around the structures beneath. Once satisfied with the overall shape, he used the zinc process to solidify them. «It’s like a skin. The leaves are fresh when you apply them to the structures, and you pin them on, and then they start to shrink down creating a sort of textile. Then you apply the metal coating, leaving a piece that looks like it was cast but was actually just sprayed over».

Rusak gives ‘Flower Infused Glass’ as an example of a project that came from the materials side of his studio’s work. He describes its origin as a discovery rather than a refinement of process: he trapped flowers and leaves between two sheets of hot glass causing them to burn away, yielding an ash residue that can be manipulated in the blowing process to reveal a pattern where the plants were applied. «I was invited to a workshop organised by some Czech glass blowers who had come to London with their kilns. I brought the materials I am familiar with, some dried flowers from my library. Glass hates moisture, and I am all about the accidents in the process, so I was interested to see what would happen. We discovered that the materials do burn away and become ash, but they keep the original shape of the flowers». To realise the concept , Rusak took his team to Nový Bor, a town in the northern Czech Republic with an ancient tradition of glassmaking. The region’s abundance of both wood for fuel and quartz for the glass itself has attracted artisans from around the world since the Middle Ages. «We were living in Prague and commuted to Nový Bor every day. Through EU funding the town has renovated one of the very traditional glass blowing facilities there and turned it into a cultural hub, where you can train and be apprenticed and where you can hire glassblowers. The head glassblower was actually Australian». They stayed for several weeks and made around fifty pieces in total – only twenty survived. The method they devised with the resident glassblowers involved lowering a bubble of molten glass into a pre-made and cooled vase held inside a mould, and then inflating it, fusing the two layers. A colourless outer layer and an opaque inner layer make the ash more visible. When cooled, the top of the inner layer forms a hollow protrusion that resembles a shoot growing from a plant bulb.

«The technique was difficult to master. There was no plan because nobody had done that before. When you are experimenting like that you have to quickly adjust the design process as you’re going along. I found it difficult to find glassblowers that were willing to experiment. For most of them the process is not about experimentation, it is about mastering the material and the technique, but at this cultural hub they were all excited. The key was to respect their work and understand their limits». Rusak’s focus is now on relocating the studio to Warsaw’s suburbs, where he has acquired a dilapidated 18th-Century villa. «It requires tons of work, but it is also in a beautiful decaying stage, which speaks to our ideas. We are starting to fill it with our work in order to see the connections between the pieces. This year is about bringing everything together and treating every project on the same level. They are all equally important to me. They are just different avenues of the research we conduct». Looking to the future, he plans for the building to function as a laboratory – «a test bed for our ideas» – as well as a studio, a showroom and a cultural hub where he will organise artists’ residencies. «We want to support the community around us, for example with a programme for children who are not into art. We want to invite them into our world of artists and craftsmen and artisans, and show them how that could be their life too». Through workshops, lessons and lectures that will take place throughout the property’s nine acres, Rusak imagines an «ecosystem» in which established artists will be able to mentor apprentices and students.This will allow ideas to foment and projects to begin, so that as the old begins to fade, another generation will be there to take its place.