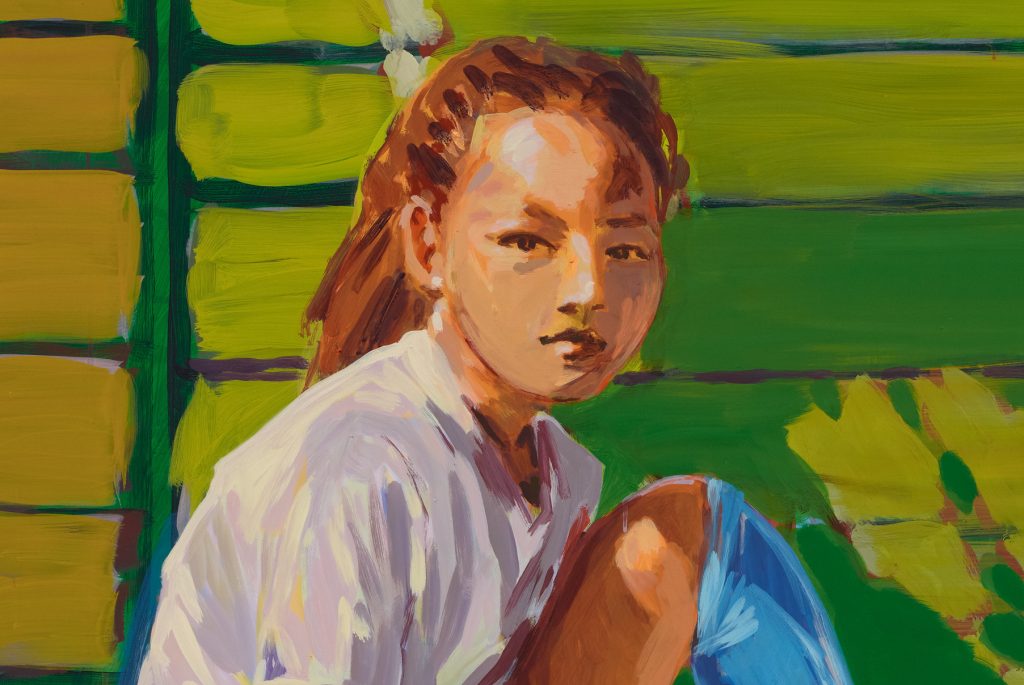 Tabouret primes her canvases with a layer of fluorescent acrylic paint. Painting is mostly about caring, and therefore, a radical — even political — act

A sunny midmorning, at the rooftop terrace of Edition Hotel tucked away in a corner of West Hollywood. Overlooking the seemingly unending LA skyline below us — dotted with billboards and palm trees, covered by a haze of smog — Frieze, and the spectacle that comes with it, feels far away. Claire Tabouret is known for her gestural, ethereal portraits, which have garnered acclaim for their sensual brushwork and sensitive handling of her subject matter.

Her paintings depict a range of figures, from historical ones to imaginary ones, from couples to wrestlers, to self-portraits. Proceeding with her series Makeup (2015 – ongoing), the artist portrays girls and women with daubs of makeup smeared across their faces. These latter images underscore Tabouret’s talent in painting — visible in her portraits of children, who are notoriously difficult to render accurately — treating each new figure with equal amounts of seriousness and tenderness. Featuring otherworldly, muted colors of an almost-Fauvist palette and loose brushwork recalling Impressionist techniques, they also have a somewhat unsettling quality to them, too, with each portrait’s face looking out directly at the viewer, turning the gaze back upon itself.

Claire Tabouret started to gain international attention after François Pinault acquired her work for his collection in 2010. Since then, the artist has enjoyed a steady stream of exhibitions and gallery representation worldwide, including Almine Rech in Paris, Emmanuel Perrotin in Hong Kong, and Night Gallery in Los Angeles. This is only her second solo show in Los Angeles, a city that she moved to recently in 2015 from France, where the artist was born.

«I was attracted to the idea of removing myself. It is a city for artists, for creating, for painting.» Los Angeles has been seen as an artist’s paradise, with (almost) unlimited space, production studios equipped to cater to the creative whims of Hollywood, and now, a thriving art ecosystem that encompasses everything from art schools to art fairs. It’s also a city for isolation, due to its geographic sprawl and resulting car culture. «You feel quite far away from every destination; not only do we wake up late, we wake up when everyone else in the world goes to sleep» she points out.

Her first exhibition at Night Gallery in 2017 alludes to this odyssey from Paris to Los Angeles. The move was not merely a matter of distance — from a city with a rich history as a center of European culture, to one that is built on a lack of history, or rather, an erasure of history. The narrative of Los Angeles is one built on mythology rather than reality. Despite its long history rooted in native and Hispanic cultures, much of the actual events of the past have been forgotten in favor of a rosier image of the city. Whether selling dreams of sunshine and good health, the final frontier of the American Manifest Destiny, or the glamour of Hollywood.

The exhibition was titled Eclipse, representing both an end and a new beginning. The show featured figures and landscapes in states of appearance and disappearance, such as the painter Agnes Martin, who abandoned the New York art world in 1967 in order to move to New Mexico in an adobe house she built for herself, where she lived alone for the rest of her life.

To many, Martin’s life and work offer a meditation on solitude and the inward life of an artist, gaining an almost mythical status in the popular imagination. Claire Tabouret’s trajectory, in a sense, very much reflects the one of Martin’s — eschewing the bustle of Paris for the isolation of Los Angeles. Tabouret has purchased a small cabin in Pioneertown, a little way from Joshua Tree, to which she retreats when not working in her warehouse studio in Frogtown, Los Angeles.

The new show indicates a return of the self and a gradual re-emerging into being, with the evocative title “The Pull of the Sun”. It is, as her gallery calls it, her homecoming. The exhibition features portraits of people who have become a relevant part of her life in Los Angeles. They include people and animals — subjects that carry a sense of innocence and compassion. «Painting is a way of caring for people. There’s a lot of tenderness. It’s intimate, soft.»

The paintings presented in “The Pull of the Sun” seem to glow from within. This, of course, is a characteristic seen throughout the artist’s body of work — she usually primes her canvases with a layer of fluorescent acrylic paint, which is revealed along the edges of the canvas and shines underneath the more subdued colors typically used by the artist. This underpainting of neon creates a disorienting effect, imbuing her images with an otherworldly light and making them appear as if they were lit from within. Her brushstrokes reveal the paintings’ process, adding to the portraits’ feeling of vulnerability.

Accompanying her paintings are works on paper, which often feature the same subject matter: the same model, the same scale, the same composition. While the paintings suggest a sense of monumentality, her works on paper convey a sense of experimentation. Her portraits series of Sachiko, captures the subject, in a three-quarter view, sitting with her hands folded in her lap, one leg crossed over the other. A wisp of hair frames her face, which is turned slightly away from the viewer and instead looks off into the distance. Her pose is relaxed, and the floral dress she wears only serves to emphasize the image’s overall impression of breeziness.

The most captivating part, though, comes in seeing all four renderings hanging side by side. In Sachiko (purple), the scrubby brushwork detailing the floral pattern of Sachiko’s violet dress stands out; in Sachiko (green), it is the bold juxtaposition of mustard yellow, teal, and fuchsia that catches the eye; in Sachiko (blue), much of the white of the paper radiates through the layers of paint, lending an air of delicacy to the portrait; and in Sachiko (pink), the painting gives reign to gesture, with a flurry of mustard-colored brushstrokes overtaking the wash of pink underneath. Because of the serial presentation of the works, the viewer is allowed to scrutinize the similarities and differences between them.

With this statement, Claire Tabouret proposes a deeper meaning for the medium of painting beyond the one embedded in surface of the canvas. Ever since painting was declared dead in 1840 by Paul Delaroche, upon seeing his first daguerreotype, the field of painting has always had to contend with an existential crisis, searching to defend itself and justify its own existence.

The pages of art history are littered with painters who have doubted the validity of painting, from Philip Guston, who declared, What kind of man I am, sitting at home, reading magazines, going into frustrated fury about everything and then going into my studio to adjust a red to a blue? to Thomas Lawson, who wrestled with the issue in his essay, “Last Exit: Painting”, published by Artforum in 1981.

Tabouret has never wavered in her conviction in painting. For her, it is an inevitable fact of life. «There is no other option. I always wanted to be a painter. That’s the only thing I’ve never doubted». In taking the time to look, truly look, at her subjects through painting them, Claire Tabouret repositions painting as an extension of caring, and therefore a radical, even political, act — not just relevant but fundamental. After all, Alice Neel once defined painting as a moment’s monument… a painting is that, plus the fact that it is also the Zeitgeist, the spirit of the age. I think that the best part is the art that makes the truest statement of when it was existing, both aesthetic, and political, and everything. What’s truer than cherishing the people around us?

Her loved ones arrive at Night Gallery and discover portraits of themselves hanging on the wall, not only observed but also recognized. It was nothing short of heartwarming to see the children of her friends posing next to portraits of themselves — ‘Tegyu in his soccer outfit‘ and ‘Terin in her soccer outfit‘, which are both rendered beaming proudly in front of their families. «At a time when there’s a lot of political art being made, painting is a way for me to center what is essential to my life: the people you live with, the people you care for, and the smaller communities you create.»