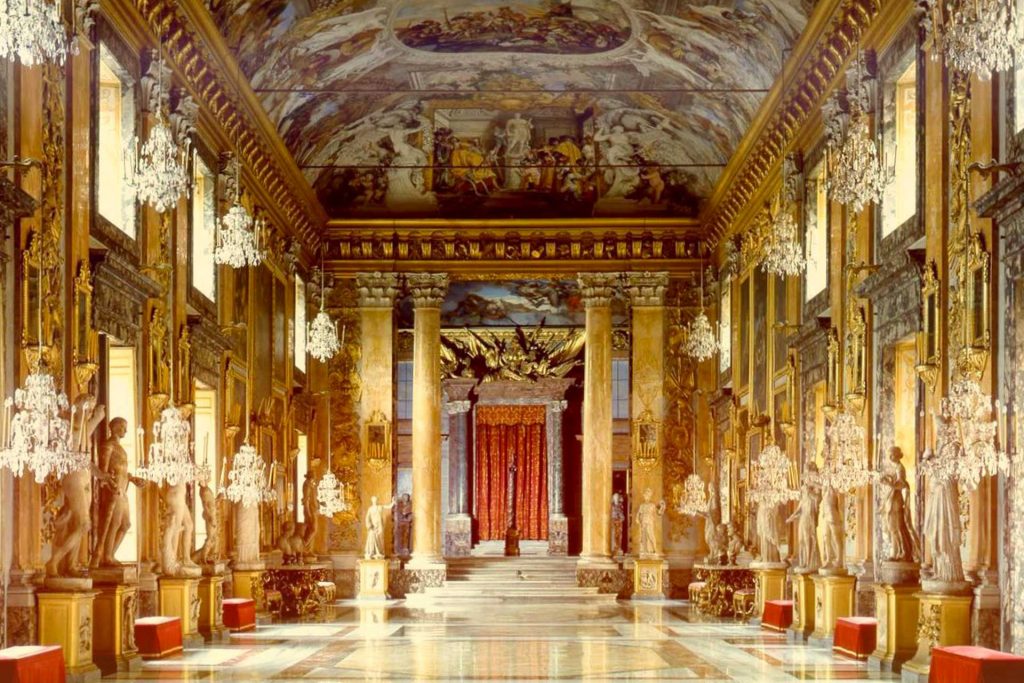 Human connections at Valentino, a collision between handmade and machine learning

The concept of Haute Couture and the speed of a digital changing world ruled by digital. Code temporal – To direct the musical performance, Robert del Naja of Massive Attack

Marble floors, curled-up bronze figures, the heart of Baroque in Rome. Since the Middle Ages buildings belonging to the Colonna family developed in the area of the Quirinal Hill, until an ambitious architectural project in the mid XVII century brought to the historic Palazzo Colonna, composed of several structures designed by architects such as Girolamo Fontana, Antonio del Grande and Girolamo Rainaldi. A sequence of halls is unveiled inwards, where paintings are hung up to fill the walls of the interiors adorned with murals along with collections of antiquities. The Grand Hall was commissioned by Lorenzo Onofrio Colonna, who intended to show the collection of art belonging to the Colonna family. Four hundred years later in the Grand Hall took place Code Temporal – Valentino Couture runway show. Pierpaolo Piccioli pulled from history – the Renaissance, the medieval era for the backdrop of his show, as everything evolves and repeats. Galleria Colonna unveiled Pinturicchio, Annibale Carracci, Guido Reni. Salient moments in history, as Marcantonio II Colonna’s victory in Lepanto in 1571, were displayed in the form of frescoes on the ceilings in order to assert their dominance over the centuries. Nowadays, within these walls, Piccioli revised the concept of Haute Couture intertwined with the speed of a changing world ruled by digital.

Since 1858 when Charles Frederick Worth established the first haute couture house at 7, rue de la Paix in Paris, it represented a land of free expression for the designer: «Haute Couture is a spearhead in terms of creation – a laboratory of both craftsmanship and design innovation» said once Ralph Toledano, president of the Fédération de la Haute Couture et de la Mode. To analyze the evolution of the language of couture, its overall message, history is the key. In the nineteenth century, haute couture was created for the bourgeois elite to distinguish it from the working class. Today, not the language but the vocabulary – the way in which couture communicates its identity – was where the reinvention happened. When Maria Grazia Chiuri was appointed artistic director of Dior and Piccioli became  solo creative director, Valentino Couture became a cross-gender mix of shapes, colors and processes. In July 2019, the Renaissance in Rome and imperialism in ancient Beijing engaged in a dialogue, and Piccioli blended haute couture and streetwear into one collection.

A translation in ethos and aesthetics: Valentino moved into a fast-moving world governed by economic priorities. «Couture was meant to offer a wardrobe to women, who could afford it. Now, the idea is to conceive a wardrobe made for modern people, created with the same ritual» – Piccioli said. Time as a value and a code, to reset in a Couture of today, which updates classical processes through garments designed to one’s individuality. Painted gold faces and poker straight hair parted in the middle for male and female models; outfits were accumulations of elements, stripped of every artifice of prints and decorations which appear different from how they look from afar. Piccioli constructed garments using techniques that ended up looking like embellishments, where the material becomes the creation itself. Minimalist structures merged with fabrics enriched by the craftsmanship of the house’s tailors, resulting in outfits such as the open-side top adorned with rose-like bijouterie along with the sequins which added a contrast. A diversity of materials – like fluorescent organza and ivory silk – were mixed together in a conversation on texture. Piccioli revealed he took as the starting point of his latest couture collection artists as Fontana, Manzoni and Brancusi. The inner essence of an object lays in its intrinsic nature, breaking through the two-dimensionality of the space in an ongoing experimentation.

A roll-neck was stretched into a pink fil coupé ankle dress, a sporty mesh top was transmuted into a latticed silver column dress. Layered looks composed of fabrics characterized by three-dimensional surfaces: decorations of ornaments recreated with assembled ribbons, and application of crystals and applications of different sizes. Coats were made from geometrically cut pieces of fabric tied together to create a wild texture effect, while the camel wool coat has been pieced together from fabric roses. The show aimed for inclusivity, presenting couture as non-gendered with male and female models in the cast: «There is no men’s couture nor women’s couture. It’s just couture and I am dreaming of a world with no boundaries» disclosed Piccioli – «Women, men: naturally smooth». Among male models, cotton and cashmere oversize trench coat with peach silk lame turtleneck, red heavy linen trousers, chocolate brown trompe d’oeil print fil à fil wool suit, pale rose poplin oversize shirt and neon green viscose cady turtleneck. The color scheme was neutral accented by touches of magenta, electric greens and turquoise blues – different shades from saffron yellow to ochre. The long silhouettes – brought higher with metallic platform heels – recalled contemporary artists, such as Alberto Giacometti, who transformed post World War II European sculpture by revolutionizing spatial perception and scale. His Femmes debout (1953) reveals a compressed energy.

Valentino collaborated with Massive Attack musician and artist Robert Del Naja. The short film contains the making of, with glimpses of seamstresses, tailoring rituals and time-lapse photography of the work in progress. The clips were processed and edited by a machine that runs a series of algorithms created by Del Naja and his collaborative partner, the neural artist Mario Klingemann, whose works encompass artificial intelligence as well as generative and evolutionary art, in a combination of systems to reveal their hidden qualities. After repeatedly watching the couture process, this artificial intelligence then played a role in the final edit: «The human feeds the mechanic, the manual activates a neural and digital process, in the quest for a new humanism. Through the synthetic filter of artificial intelligence, the emotional aspect of Couture emerges, with the celebration and enhancement of human quality». Exposing the craft and the handmade processes, Piccioli unveiled a human narration, personal yet unanimous of a story that is yet to be written.

Valentino’s creative director Pierpaolo Piccioli teamed up with artist and musician Robert Del Naja and neurographer Mario Klingemann in a film accompanying the S/S 21 Haute couture runway show. Code Temporal – an artwork that explores the creative process behind the collection through the synthetic filter of artificial intelligence.