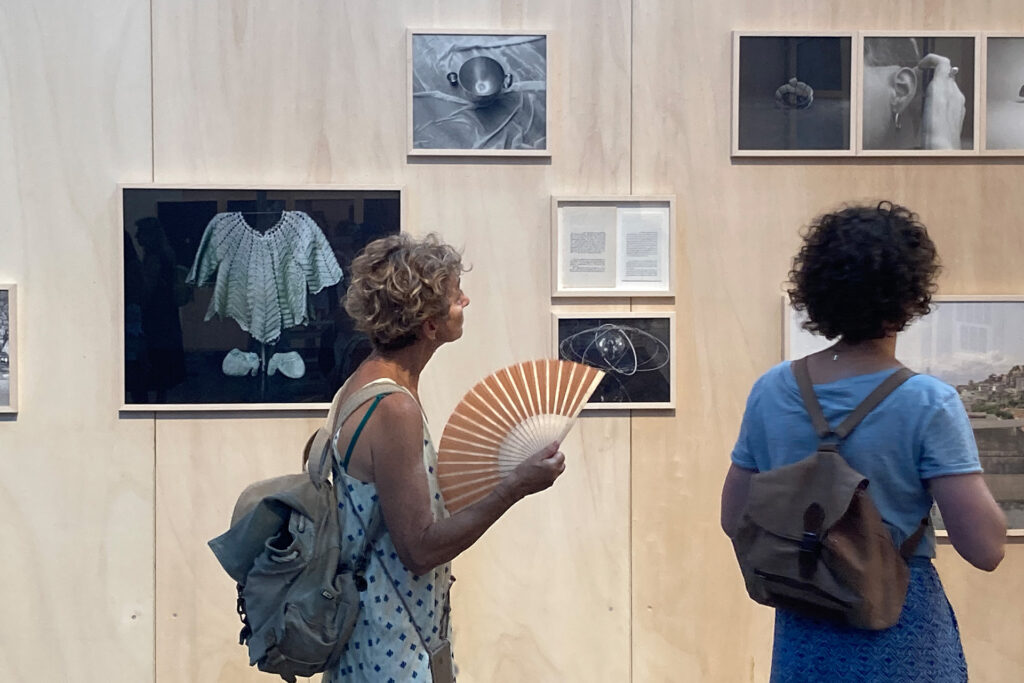 They met on Tinder. Gal and Hiroshima, or GH as they present their work, are two letters standing together in the alphabet; a love story tracing back to disastrous events such as the atomic bomb launch in Japan.

The nickname Hiroshima comes from the artist’s grandfather who gave it since his birth date coincided with the tragic event. In a serendipitous realization, Hiroshima found out Gal was born on the same day as the person sending the bomb. Call it fate or destiny, creatives seem to have a story to reincarnate through their work.

The first photograph Hiroshima took was a portrait of Gal, and shortly after the eighteen-day second date, the two moved in together.

Navigating their past while questioning gender identity norms, the photography series they expose at the Les Rencontres des Arles photography festival is an intimate instruction guide to retelling old as-time stories.

At a young age, Hiroshima was thrown with stones on his return from school. Growing up in a small town in nome, the prejudice for his ambiguous and standard disrupting look, was reason enough for violence. Years later, returning to the same street with Gal, he decided to collect the stones to represent revival and disobedience to the past.

David and Goliath from the Bible

Crossing high-heeled legs, lipstick spasms, and raw portraits, the two artists intended their project to become a book of 130 images with a booklet in the middle of its pages that tells the story of David and Goliath from the Bible. «We edited the pages of the Bible to the non-binary language. We wanted to create a hero for our childhood. David is a person who uses stones too, but David is the one who was using it against him to protect him».

For this, the leitmotif of stones has many facets and a meaningful tone of voice. The two artists pair them with many different objects, from a pair of pants to books, which are all items selected from their mother’s archive. One of the hair blocks in the photographs belonged to Hiroshima and was the part of hair his father cut away while his mother kept it.

While portraying conflict and balance, the exhibition is a pandora’s box of paradoxes with little to decipher and a lot to understand. Sexuality and nudity lay on the edge of a shared battlefield. Corpses become bodies and objects are personified through bold storytelling. Aggressive elements such as stones or scissors are distorted and sweetened by their subversive language.

«It’s a privilege to have intimacy nowadays». Gal and Hiroshima developed their photography series during the quarantine enveloped Covid years. They shot most of the images in a studio, but they explain how it didn’t affect the creative inner space while empowering the debated concepts they evoke. Talking about violence in a universal yet personal sphere, such as the one that has publicly been performed on Hiroshima, they condense a feeling.

«We didn’t want to recreate anything or make it a spectacularity. I think to have been given an opportunity to have a space and to create in the intimacy and the silence, talking about something that is somehow too intense, shaping it into an aesthetic».

During the four years of shooting, the process the two creatives undertake was resourced with limitations. They didn’t have access to high-standard techniques or even advanced machinery. Hiroshima recalls how he and Gal didn’t have a digital camera, using an old tool they bought on the sidewalk at a fair for twenty-five euros. 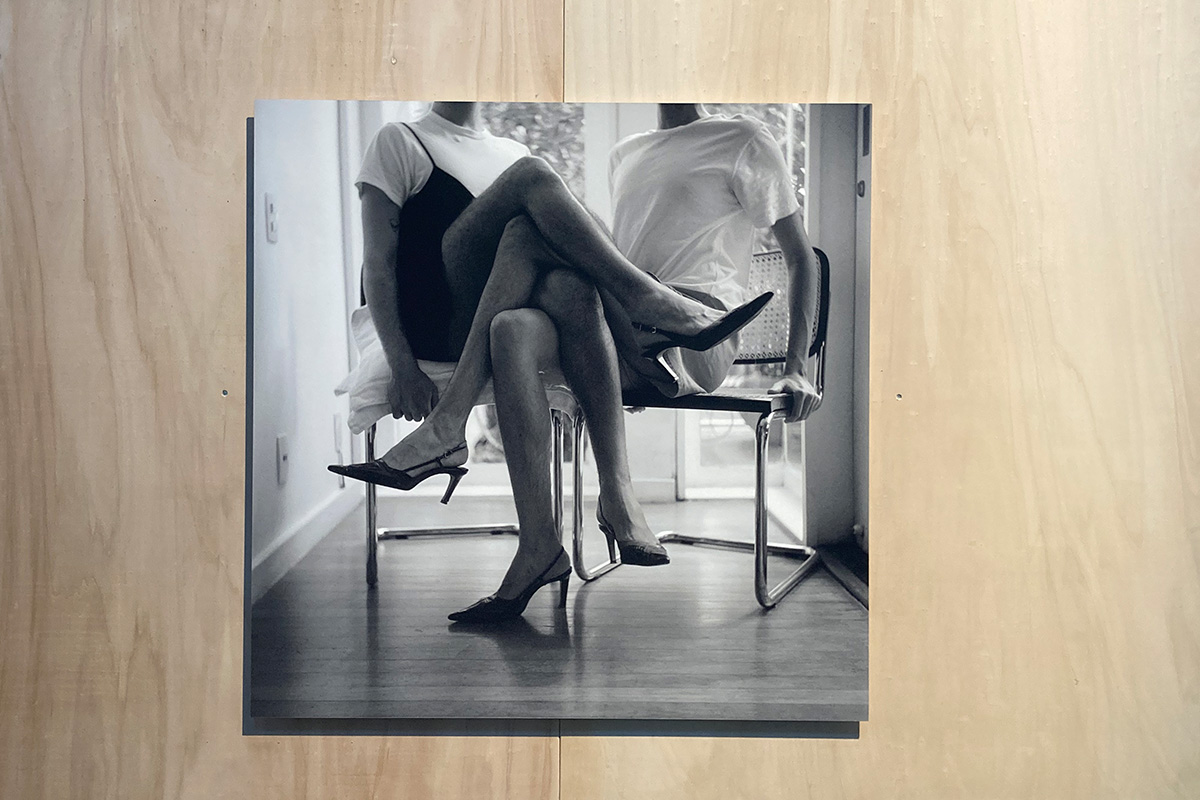 Initiate the performance leading to a visual materialization

«All the films were donated, expired. They were color films, black and white films, all over ten years expired». The realization motivated Gal and Hiroshima to pursue more complex and engaging forms of expression, following from portraits to black and white or colored images without the imposition of a strict imaginary.

With Gal’s involvement in fashion and sculpture, the photographic process starts from mundane daily attitudes or actions. Habits such as getting dressed, taking objects from around the house and transforming them into fashion items, putting them on her body, initiate the performance leading to a visual materialization.

«Whether it is Gal’s body, or a stone or anything, Gal has that process and the photograph itself, we praise the certainty of the expired film as the medium for it». Mistakes and errors are part of the photographic development of the two artists even when they plan by storyboarding and trying to discover thought-provoking narratives, revealing new issues.

In their work, Gal and Hiroshima don’t try to separate the objects or subjects from what they represent. They speak of real struggles, withdrawing from autobiographical experiences. The emotional component is as authentic as it is political. An unrested necessity to bring up attention to aggressive behaviors conveys the rights of human beings. Violence drags with it healing in a two-faced sword.

«I often see artistic pieces that can heal. There’s something that we read from Jonathan Mombasa, a Brazilian artist. She has a chapter that’s called Redistribution of violence as self-care». One of the images of Gal having her leg paired with scissors draws from the belief tackling sexual abuse, while the two hands stretching a heel can also become a gesture of self-care.

But then, does photography have to have an audience? To keep fueling the conversation on possible worlds we can prioritize understanding our knowledge scheme.

«We understand that the system is built demonically and predominantly straight and says it is not going to change unless there is a formal apocalypse and it starts over. What we think we can do with photography is to try and collaborate on a reboot of the mythology of language. I think distant gender disobedient narratives are less linear than every other experience».

Exploring identity and self encounters is attached to images, and the body approach in Hiroshima and Gal’s work is a focal diagnosis of rebecoming. «I don’t know where the artists’ audience is, whether we need them, but what we need is more stories, more people to produce their stories. What we want to imagine are gender disobedient childhoods that are free».

Teaching a course in Brazil named Circles of Memory and Perversion, Hiroshima grew attached to the latest word. It can oppose the concept of being socialized while remaining appropriately provocative. «To pervert something, we need to think about how it’s presented; where it is, and how it’s talked about, not to allow it to be in a place where it doesn’t have to be in, not allowed to be in a gallery». While exercising commitment, photography has the powerful strength to direct, concretize and confirm something our language can only evoke and project in the minds.

«We know how we can destroy someone’s history by translating it poorly. It’s the same with photography. I keep saying people won’t offer their body, face, or story to a foreigner who doesn’t truly see them. So we praise autobiographies. Maybe that’s the beginning of perversion».

Rodrigo Masina Pinheiro, born 1987 in Rio de Janeiro, Brazil. Gal Cipreste Marinelli, born 1998 in São Gonçalo, Brazil. Live and work in Rio de Janeiro, Brazil. They use various mediums in their work, such as photography, film essays and literature. Their research addresses LGBT+ childhoods and the ontologies of the gender-disobedient body despite heterosexistregimes, incarcerated subjectivities and the various processes of narrative mutilation.