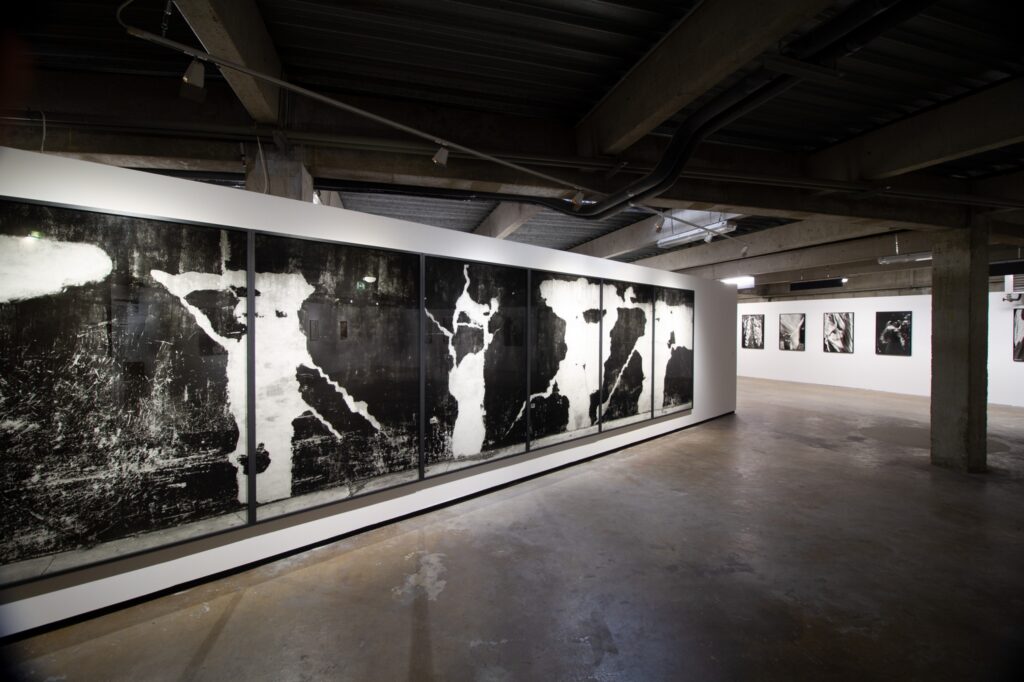 What we see every day is tedious. Concrete-made buildings, broken facades, and fallen leaves are nowhere near the luster of sophisticated architecture or springing nature. Immortalizing the raw, the common, the sterile everyday views of the cities, Luckas Hoffmann knows how to turn even the blankest surface into poetic existence

For this year’s edition of Les Rencontres D’Arles, the photographer showcased a series of images under the title Evergreen, giving a run-trough of his work, from urban landscapes to street photography of anonymous passers-by.

«The pictures in the exhibition don’t show any events, or they don’t point at something that would be gripping in some way. I want the image to be captivating and not what’s in it». Following this philosophy, Hoffmann’s technique resembles that of a painter, admitting to being more drawn toward the history of drawing and etching rather than photography.

He questions the aesthetic experience one encounters through his work, paralleling his subject’s dissolving attempt with abstract painters’ techniques. While «it is pretty much about the autonomy of an artwork», Lukas Hoffmann gives life to whole environments, pairing his work in harmonious series of images he shoots independently of a theme.

Contemporary works are usually about the safe space they create for the viewer to self-express and empathize on different layers when facing art. Living in Berlin, the Swiss-Australian artist graduated from the Beaux-Arts de Paris in 2007, then moved to Antwerp and later New York.

His pieces are referential to street photography movements while navigating the art scene of this century. Hoffmann’s images have been exhibited in art galleries in Switzerland, France, and New York City, sometimes as stand-alone (Bronx River Avenue) or image slides (Polderbos, Hecke bei Malchow, NYC Sidewalks). In 2019, the photographer inaugurated the first book, Untitled Overgrowth, a series of twenty-two frames containing his most representative work.

Lucas showcases a selection of the Strassenbilder series (2018 – 2019) at the Arles festival, his close-up frames of moving back compelling with curiosity. Who is the subject? Where was it shot? The silhouette of people is engrossed, almost coming out of the picture. It can be only a leg or a hand the swiss photographer suspends.

Nevertheless, the image has the impact of a portrait. Hoffmann agrees that photography is about choice, the decision of which moment or view to freeze with the camera, and the decision to leave something aside. «Speaking about the frame and tension and concentration on details, sometimes it’s a matter of three millimeters in leaving something away or putting it in. That makes the picture work or not».

Choosing these frames are, eventually, what infuses the work with a recognizable aesthetic identity, whereas artists produce and expose high quantities of art. It illustrates how editing is an art itself. With a composed language, Lukas Hoffmann refers to his selection as a ‘dialect’ enveloped in the use of a large camera.

The street photographs focus on a new technique, using the same photographic chamber designated for still images. Hoffmann shot the subject freehand without looking through a viewfinder. «The negative is thirteen – eighteen centimeters high and thirteen centimeters wide. It’s a heavy tool, and I chose to focus on eighty centimeters.

When you have the film holder inside the camera, you need to take a picture without looking through the glass. I took 500 pictures, and only 30 were okay, 470 are for the rubbish bin», the photographer explains. The shooting process lasted throughout three summers so that he could work with the required natural lighting.

«I was walking around in the pedestrian areas in Berlin, being physically close to all these people, with this monster in my hand, while shooting them from a close distance». Taking street photographs can be seen almost as an act of public performance, even more with a noticeable camera. 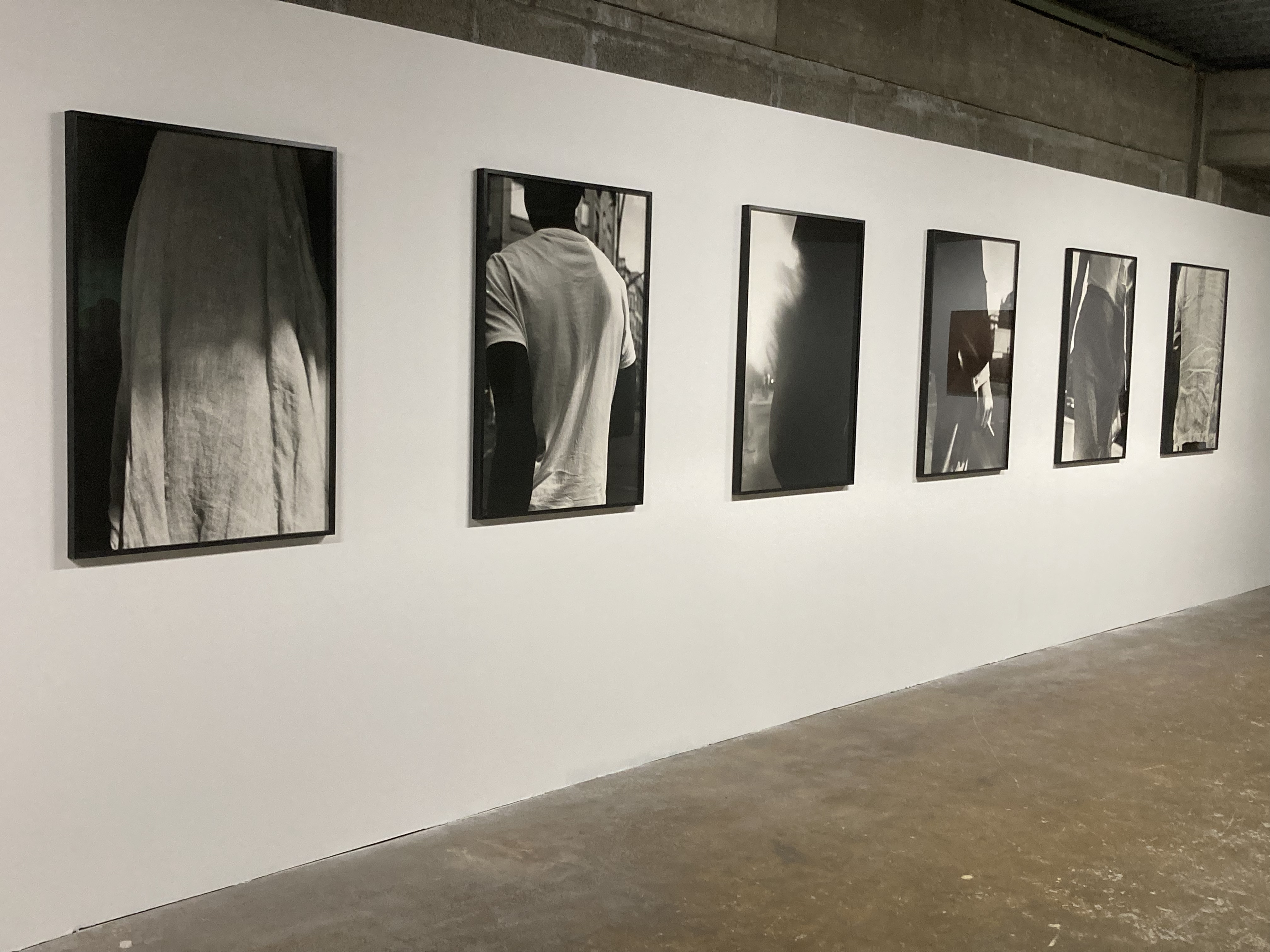 The evolution back to analog photography

Lukas Hoffman’s decision to return to an analog photography tool reveals the divergences between the generation of artists and the rapid rhythm with which image taking has evolved. With a photo camera at every phone owner’s disposal, street photography became an ordinary gesture, only upgraded by knowledgeable techniques.

Sometimes we see a piece of clothing or just the skin, a play of shades, an uncertain city background, and the light contrasts tangible. With his visual language about surfaces and flatness, Lukas Hoffman only captures the back of his subjects, depicting them as you would with a house’s window or door, his work impersonally personal.

Between Berlin, Paris, and New York. On urban sceneries

The urban context has a value in Lukas Hoffmann’s work. Embellishing his images with the sense of familiarity and recognizable details, the swiss-Australian artist upholds the significance of city immersion. He often perceives street photography as a cultural reflection and a matter of respect.

Casting an interaction with known and predictable spaces, Hoffmann compares the different experiences he had in the cities he lived in. He has been in Paris for eight years, lived in Antwerp and New York, and later had a camper residency allowing him to travel around eleven European countries.

The photographer does however confesses to not needing space exploration to create his work. «I’m not someone who has to travel to take pictures. I can easily get out of my studio, put the cameras on the back of my bicycle, and then go and see what’s happening and what I find».

Berlin and the urban layers

Berlin is a city of many facades and urban layers. Close to the countryside, towards the edges of the city, where the industrial areas prevail, Lukas Hoffmann feels most inspired. «Where everything is not clean and tidy, and as soon as someone drops a bottle, someone picks it up. There are lots of traces and scratches and ugly things that attract my gaze».

Attesting to the evolution of street photography and its rapid change in the past thirty years, the artist doesn’t conceal the cultural juxtaposition between the European countries he practiced in and New York, «where the traditional street photography has a much higher acceptance».

When working there, Hoffmann recalls how «people would come to me, and I would take their picture, and they would say, Oh, what are you doing? Here, they would immediately try to sue you». For this reason, he avoids interacting with the subjects, only portraying their back, while maintaining anonymity. He feels he wouldn’t have been able to create his work in Paris, where «there are people that yell at you as soon as you point to camera», and explains how he prefers shooting in environments he’s familiar with.

In this way, photographing is almost a social act, resonating with multicultural peculiarities considering developed regions where people still think someone steals their soul when taking a picture or Amish people who don’t want to be photographed.

«I don’t know if I would be doing this in a place where I’ve never been, because I don’t know how people would react. I don’t want to get into their integrity. It’s a question of respect. Here in the Western and in the German world (Germany or the middle of Europe), I am part of a society I know how to interact with or to interact without hurting anyone’s feelings».

Born in 1981 in Zoug, Switzerland. Lives and works in Berlin. From 2003 to 2007, Lukas Hoffmann studied plastic arts at the National Higher School of Fine Arts (École nationale supérieure des beaux-arts) in Paris before taking part in the La Seine research project (ENSBA, Paris) from 2009 to 2011.