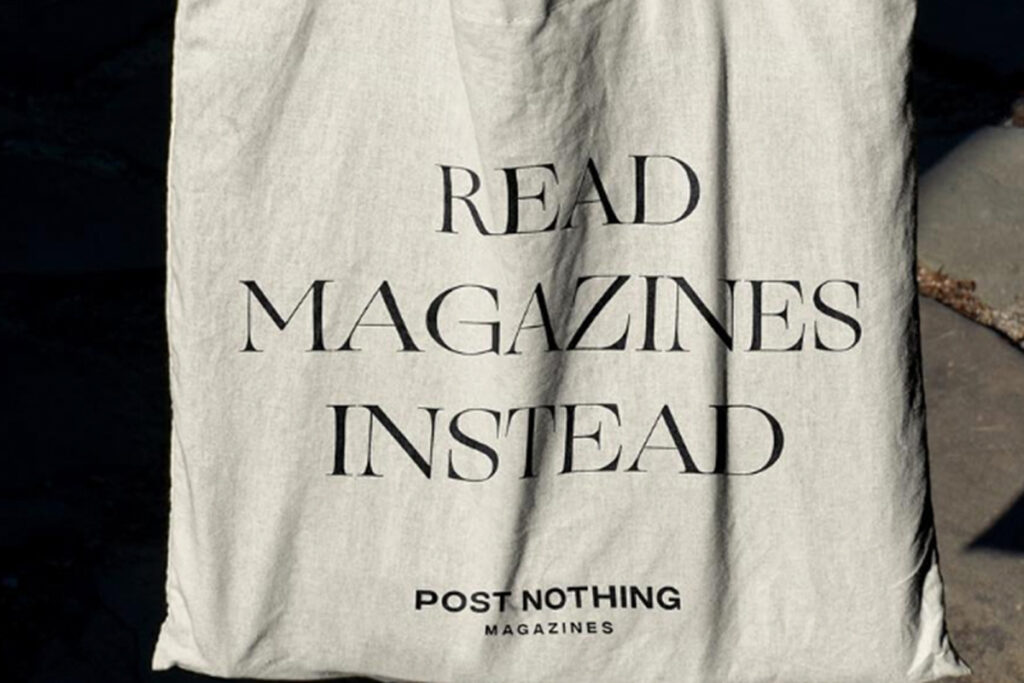 Post Nothing Magazines, Bogotá. The only magazine store promoting a new community for its creative scene

Adopting a zero-discrimination policy, Post Nothing provides a safe space for the marginalized: in conversation with founder, Manuela González

In Bogota’s city center, in Chapinero, is Post Nothing Magazines, a bookstore committed to the promotion and sale of printed matter. With a background in fashion marketing and communication, Manuela González founded the store in 2017 to create a space where she could find inspiration and information. «When I was studying at university, there were no physical stores for me to purchase fashion magazines or publications. My store started as a personal need, I felt that I needed to fill that gap».

Ms. González says that her time at university «was strange» as she got to know herself better in terms of taste but the publications,she had access to like Vogue, Latin America, or Mexico did not match her newfound identity. «I felt out of place as if I did not have a space in Latin American fashion culture». It was when she found internationally driven magazines like, Dazed and iD that she felt understood. «Everyone had a chance to connect to the magazines».

Today, Post Nothing’s physical and digital store carries over one hundred titles spanning topics of fashion, design, arts, and music from countries such as Germany, France, Italy, China, the Czech Republic, Turkey, etc. The magazine store’s locality is one of Bogota’s art and design districts, preferred further by locals than tourists. A window to Bogota’s art and design districts, the neighborhood is a first of its kind in Latin America known for its large gay community.

In the 90s, Bohemian writers, artists, and LGBTQ folk moved into the area, transforming it into an urban progressive enclave. Chapinero’s former mayor Blanca Inés Durán Hernández is openly lesbian, herself. It is not just the LGBTQ community that frequents Chapinero, the area is known as the ‘Locality of Positive Diversity’ housing Colombians from all over the country of varying backgrounds.

The architecture seen in the area is a mix of styles built by designers who brought back blueprints from their travels across Europe and the world. This is a sentiment that resonates with Post Nothing Magazine’s core values, «love, respect, and understanding». Ms. González explains, «Colombia is a traditional country. There’s a lot of racism and homophobia here but at our store, we strive to be open-minded with zero tolerance of discrimination. We want to make our customers feel loved and safe in our space. That will remain our primary goal».

LGBTQ+ rights in Colombia are among the most advanced in Latin America and have progressed since homosexuality was decriminalized in 1981. In 2008, the Constitutional Court granted registered same-sex couples the same pension, social security, and property rights as heterosexual couples. In 2011, Congress passed a law banning discrimination against sexual orientation and in 2016 legalized same-sex marriage, making Colombia the fourth South American country to legalize it. Despite this, reports of discrimination against the community are commonplace.

More than thirty transgender and gender non-conforming people were murdered in Colombia in the first half of 2021, and more than sixty in 2020. Fatal violence disproportionately affects transgender women of color – particularly Black transgender women – an intersection of the racism and transphobia prevalent in the country.

Afro-Colombians make up 23.6% of the population, one of the largest in Latin America but along with systemic racism that affects their right to free, prior, and informed consent regarding development projects affecting Afro-Colombian territories, they experience discrimination daily, casual, and overt. Together with the country’s Indigenous peoples, they face high levels of poverty, made worse by decades of armed conflict that have impacted them inordinately. Police brutality is another issue in the Afro-Colombian communities – much like throughout North America, Black people are subject to racial profiling, more so than their white or mestizo counterparts. Post Nothing is currently working with the Paro Nacional in Bogota during their two month-long strikes against Colombia and Iván Duque Márquez’s government. The protest came about as a retaliation against a plan to raise taxes which has now been withdrawn but the mass movement still stands with daily demonstrations. The protestors are demonstrating against racism, police brutality, and more social justice in the face of consequences resulting from the Covid-19 pandemic. The pandemic caused an increase in poverty among the 50 million inhabitants of the country, from thirty percent to forty-two percent.

Determined to create a safe space and community of her own in Bogotá’s creative scene, Ms. González likes to bond with her customers through her products. She says she likes to hang out with her customers as it allows her to teach them a bit more about the print industry. They come in to buy magazines but stay to chat and have a drink or a coffee. Ms. González’s customers feel comfortable in her space. «I’ve developed an interesting bond with my customers. Some of them have become close friends of mine. All because of the magazines».

Post Nothing’s customers are well-traveled, and they all speak English, according to Ms. González. This is why a large selection of the magazines are English. She has noticed that her patrons are mostly men from the ages of thirty to forty. «I’m not sure why, it could be a coincidence but it’s kind of interesting. I hope my store can help attract more females to work and inhabit this space».

Besides magazines, Post Nothing offers music through its analog form, vinyl; an ode to the origins of its name that comes from Japanroids’ 2009 studio album. «I’ve been studying music since I was six or seven years old. It’s a passion of mine. I find music to be a beautiful way to interact and connect with my customers. It is personal and artistic. It is a natural merger for my brand». Ms. González does everything in her taste, so she first started with her primary preferences, jazz, and hip hop, but she is open to the suggestions brought to her by her customers too. Post Nothing has curated Spotify playlists too.

When asked about the Colombian Arts scene, Ms. González describes it as «passionate like the Latin American culture». The new scenes reflect the youth where there is a wider acceptance overall – whether it be in love and sexuality or politics. Ms. González says, «it is growing at a rapid pace» where she hopes Post Nothing can provide the creative youth with new interactions and promote curiosity; the same reason that burgeoned her love for printed matter.

«Growing up in Colombia, you are taught to be doctors or engineers and told that creative career paths will make you extremely poor but, magazines show us that it is possible to succeed. It helps us find our voice. That is key for me and the brand». An experience she hopes to bring to Mexico as well, «we are planning to expand our stores next year, to fill the gaps in Mexico’s magazine market too». There is one bookshop in Mexico that offers magazines, but they bring in new issues every six months or so. Ms. González wants to provide up-to-date stock and resources for the growing art and design scene there.

She chronicles the experience of reading as a special moment, paralleled in the print industry’s evolution itself. «10 years ago, magazines were a buy and throwaway thing but now, they are books with high-quality papers, formats, etc.». She sees magazines as a collector’s item now– something to treasure forever. But Ms. González divulges that they do not work with monthly publications as it is a waste of paper. «There should be a balance between digital and physical so we can stop the unnecessary wastage of paper».

Post Nothing opts for bi-monthly and quarterly issues that discuss topics that are transcendent and special. Magazines that people can keep and refer back to for years to come. The owner herself uses Instagram to connect with customers daily through their magazine selections. The reason for Instagram, «running websites here is quite expensive and citizens are suspicious of them». Post Nothing took the pandemic as an opportunity to further integrate a digital strategy for their brand. «We worked with photographers to take appealing product shots for people that could not visit our physical stores». This helped them to boost their sales. They continue to use Instagram today even though restrictions have eased.

In the future, Post Nothing will look into hosting events for their community where they can play their vinyl records or engage readers with books and magazine fairs. Their main goal remains to create further ways to interact with one another. Ms. González recounts, «I have been broke two times since opening my stores. The publishing industry oscillates, sometimes we are up, sometimes down, but I do it because it is rewarding».

A bookstore in Bogotà city centre, in Chapinero, committed to the promotion and sale of printed matter