Circular fashion is about repurposing your clothes: they can even become dinner

They say the grass is greener where you water it. For the 2023 Menswear Collection, Loewe reinforced the idea that caretaking can be the most rewarding form of ownership. Collaborating with the Spanish eco-designer Paula Ulargui Escalona to resurface the art of craftsmanship, J.W Anderson staged a fashion show preoccupied with the paradoxes of the Anthropocene, where fashion relies on the «fusion between the organic and fabricated».

Other than the development spectrum, the collection touches upon digitalization and the addicting interaction with screens, while leisurewear and sportswear transform into IT pieces. The show also paints the image of a disconnecting lifestyle where contact with nature and its resources exists only as a construction.

Flourishing grass pieces springing from the coats or trousers

Between denim pieces and spandex leggings alongside puffy oversized jackets, there’s a contrast between traditional and post-covid aesthetics. The novelty in material play is the flourishing grass pieces springing from the coats or trousers. Ironically, seeing the grass-infused sneakers feels like having a personal private loan you can carry throughout the city. Forget the water. The miracle of the future is walking on grass.

Coming from a family of creatives, Paula Ulargui Escalona emerged in the multidisciplinary art field from a young age, «always experimented a lot in their studios with every type of material».

Studying in London at a school where practicing jewelry design, music, graphic design, or ceramics was a way of challenging knowledge and cultivating innovative approaches. Going into fashion, however, was a turning point for how Paula perceived the future of her career. «The fashion industry was in a way hard for me, I didn’t feel connected to it, I didn’t feel part of it», she says while recalling how through that crisis she reconnected with her values, understanding how to work in the industry would mean to find ways of bettering it.

In her studies at the IED Fashion Institute in Spain, Paula Ulargui Escalona explores nature revival through clothing, joggling with natural dyes and cyclical materials. While participating in a workshop in Chile, she stumbled upon the Anthropocene concept thanks to one of her friends. Paula confesses it was: «what got me to the point that I am. That’s what got me to the thought: Let’s reconnect humans with nature». More than the bare relationship with the environment, she relies on methods clinging to its understanding and reinforcement.

When faced with technological evolution, she pursued her research motivated by anthropological observation and attachment to natural resources and species interconnection. If our ancestors, parting from primordial civilization like the Romans or Egyptians, could understand how the planet worked, predicting events in the cycle of their environment life, now we deal with the lack of awareness towards the same phenomena.

«Without checking a phone and knowing the weather, they will just look at the sky and say it’s gonna rain in three days, and the rivers will have fish in two hours, all things we’re not capable of anymore».

Reintegrate materials into the life cycle

In 2000, Chemistry Nobel Prize winner Paul Crutzen described the Anthropocene as the geological era represented by human impact and alteration power over nature.

«We live on top of it as if we were disconnected species. I feel we’re part of nature and could integrate ourselves into how the whole planet works. Do animals and plants still have that connection? More? Well, maybe not, but it’s difficult for us to take care of the planet if we see ourselves as an external element, just taking one thing and throwing it out. To change this, we need to touch the ground, feel it and understand what it needs. Maybe we could absorb all that wisdom to live more balanced reinforces the bio designer and researcher».

One of the most urgent issues in design remains the use of materials, focusing on how they can reintegrate into the life cycle while being repurposed for other constructions. «I think one of our biggest points works around materials that don’t belong to nature. Fashion encounters many limitations through mixed fibers that can hardly be separated and recycled. If each material followed a cycle, that would prolong the life of the clothes».

Growing plants from fibers – the technique behind Loewe’s menswear line

Investigative craftsmanship and eco-chic sensuality, the garments ideated by Paula Ulargui Escalona, are the voice of a sustainable mentality. Loewe approached the Spanish designer, who feels the two share an intrinsic reach for artisan techniques with a touch of innovation. «I consider myself a little bit of an artisan because the process of preparing and growing the plants is crafty», she explains.

Mutualist Nature, Commensalism Nature, Siamese Skins, and Habitat Commensalista are just a few of Paula’s research projects, exploring the liminal space between green design and Haute couture tradition. With her creation, the designer tries to put the wearer at the service of nature and not vice versa.

The purpose is to be beneficial to one another without enduring any harm in the process. Continuing her graduation analysis, the Loewe collaboration draws from the Symbiotic Nature research project, an approach that allows the wearer to experience nature at its early stages of life, following its growth and decay. 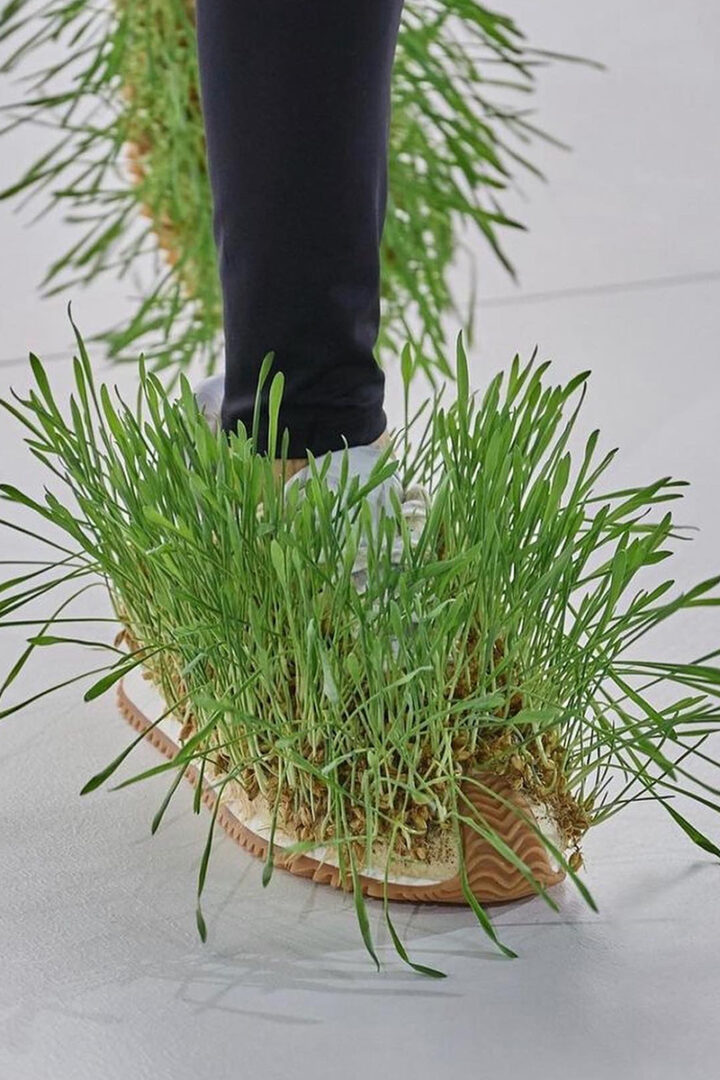 02/03 Details of Escalona's project for Loewe

Gaining awareness of the minerals, vitamins, water, and light quantities

«It was my final degree project, and it took me the whole year during which I experimented with all types of seeds. I tried many fabric structures to see which would be better for the plant to grow on. I also did a lot of research on colors because while it’s easy to find green plants, I wanted to talk about the immense color palette nature offers».

Approaching engineers or people working in gastronomy to find the ideal plants and spices, Paula crossed the borders of fashion. She prioritizes the growth process rather than the desirability of the clothing item, gaining awareness of the minerals, vitamins, water, and light quantities, always asking herself: «What is that they need to grow?»

The process enabled a preoccupation with nature, where garments were chosen to support their life and well-being. «Instead of dyeing garments with natural dyeing from flowers or other plants, I wanted to grow those plants in the fabric so they could directly dye the fabric in their color».

The process wasn’t less complex when approaching the trials for the Loewe show, where Paula had only two months of research before planting the seeds on the coats and the forty-two pairs of shoes – a more challenging task due to their tri-dimensional form.

For the Loewe collaboration, it was grass and a type of rocket that is small and rounded the bio-designer chose. «I think it was the ideal match – big, powerful, crazy, and wild».

Socializing a new generation of consumers toward nourishing actions

Stimulating attachment to the clothing pieces, the Spanish designer confesses she is most emotionally involved with one top she kept alive for two years that she wouldn’t throw away.  «Is a top I waved myself, taking me a month to make it from a species of plants that don’t have roots, so they draw survival nutrients from their leaves».

This type of process puts into perspective the customer behavior toward their purchasing. While still not available on the market, the garments Paula Escalona created for the Loewe Menswear line are a future proposal for new typologies of customers. Her clothing can’t be produced in large quantities or sold anytime, everywhere, for everybody to have at their disposal, establishing rules and responsible thinking.

«I think it’s challenging to move as a whole society to that. It would be a new era if we, as consumers, decide that we prefer to have crazy garments that we take so much care of».

Paula Escolona’s design explores the principle of circularity and upcycled fashion, where her items can go back to nature. Imagine having a fashion item you keep for a few outings, then planting the seeds in your garden to have for dinner in a couple of weeks.

«I would love to see a famous person buying it and saying on their social media: Today I’m wearing my shoes, and I want them to look amazing, so I have bought this mineral I will spray on them three times a day. It would completely change the paradigm of the industry. It would be the right medicine for us».

Therapeutic and disciplining the process of taking care of one’s clothing, is the key to changing the wearer’s mentality. Therefore, Paula Escalona continues to collaborate with brands as a consultant and designer, researching new ways to implement plant-based textiles such as mushroom or leaves waved fabrics where «the whole concept is creating with nature or creating innovative material with zero impact». Her aim remains to help brands transcend toward sustainable innovation. «I think we need those messages to be spread all over the media».

Paula Ulargui Escalona is an eco-fashion designer specializing in the development of sustainable techniques. She is an IED graduate who works in collaboration with brands attempting to elevate innovative craftsmanship.