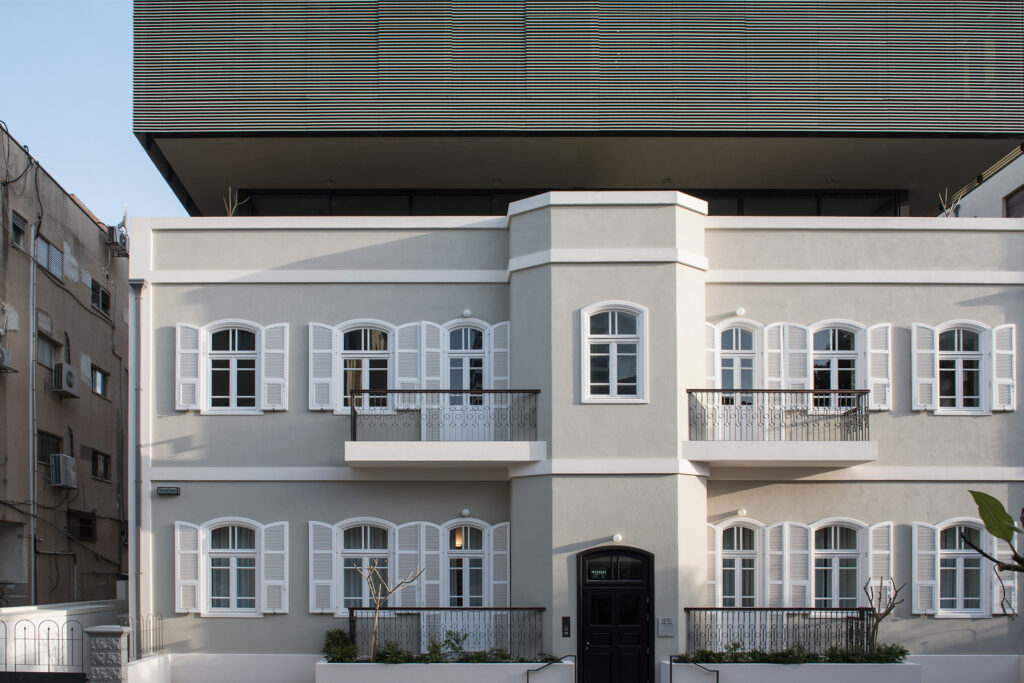 The Levee, Tel Aviv. A recent past and an expanding future under the banner of eclectic design

The Levee is an expression of a future-oriented Tel Aviv, aware of its own history and architectural tradition to be glorified. Ori Arison from Bar Orian Architects recounts the restoration process of the early Nineties villa

Tel Aviv: from a desert to a metropolis, a city projected into the future

Tel Aviv is a city expanding outward. Climbing to the top of a building, the view is lost in a horizon dotted with cranes. But it is also a city undergoing a renovation effort on the inside. Founded in 1909 by a group of residents of the nearby city of Jaffa, led by future mayor Meir Dizengoff, the city’s name refers to a passage in the Bible: in the Book of Ezekiel, the hill of spring is the place where – in the prophet’s vision – the exiled Jews find a home. Sixty families celebrated the founding act of the new city: they gathered on the beach and drew lots for the plot of land to which each was entitled.

Today, such dwellings survive protected at the foot of skyscrapers, or even embedded in the modern urban structure. From a desert to a metropolis: after World War II, the city developed to become, as a conurbation along with neighboring cities, Israel’s major center in terms of population and economy.

Located at Yehuda ha-Levi St 16 (Neve Tzedek, southwest Tel Aviv), The Levee is an expression of a future-oriented Tel Aviv, but also aware of its own history and architectural tradition to be glorified. Originally named The Gurevitch House, the villa was first built in 1913 and is part of Tel Aviv’s UNESCO World Heritage site for its 4,000 Bauhaus and Eclectic architecture-style buildings.

Prior to reopening as The Levee, The Gurvetich House underwent a restoration and transformation process with preservation specialists, Bar Orian Architects, including a removal of wall coatings to expose the building’s original cement and features, exposing the wabi sabi-type beauty of Tel Aviv’s historic villas. «Before this villa and this neighborhood there was nothing here, just sand», Ori Arison, Chief Operating Officer at Bar Orian architects, starts recounting. «This is the first neighborhood in Tel Aviv. Outside Jaffa, there was nothing».

The first prior intervention on the building dates back to 1999. «They dug the small basement beneath the building and it remained two stores, two boxes. We wanted to keep the proportions as they were».

Tel Aviv is a hard city to invent and to be creative in. «When you are designing new buildings there are manual guidelines, and they tell you what you can or cannot design. This is why the newest buildings and skyscrapers look pretty much the same». It takes two to three years to obtain the license and the building permit.

«If it’s preservation, it takes extra years to get it. As new buildings, you don’t have a plan on how to build it. In buildings that we design on top of original buildings, you negotiate the design with the preservation department – building for preservations is the only place where you can negotiate and be creative, and where you can have fun architectural talk with the city about the design. You need to wait for the municipality approval to allow these contemporary additions, and this process takes another three years. Only then you can start the licensing procedures so in total it could be up to five years to obtain the building permit».

Bar Orian Architects: the restoration project of The Levee

The starting point of the design for The Levee was centered around achieving a connection between the original Eclectic architecture-style structure and the contemporary extension, while respecting the preservation guidelines in place for the original building.

Bar Orian Architects designed an additional floor that strayed from the building’s original architectural style. This is an ideological statement: architecture from different periods should be faithful to the spirit and principles of that time period. They maintained the division of the total space including the two volumes that create visual distribution and linkage between the scale of the new and original parts of the building. Where possible, it was decided to maintain the historic layout inside as well: the staircase is the original one.

The Levee: the apartments and the Penthouse

The added top-floor of The Levee, which houses the Penthouse Suite (Apartment 8), features advanced shutter systems that create shade throughout the day, and showcase a transparent front emphasizing the use of technology. The original wooden shutters were not replicated for the new floor, not only due to aesthetics, but they were not actually necessary – the ‘smart’ glazed-glass windows filter direct daylight and create privacy.

Apartments at The Levee range from 115-280 square meters in size, with ceilings ranging from 3- to 3.5-meters in height. They are fitted with kitchens, en-suite bathrooms, Egyptian cotton linens, private balconies, televisions, sound systems, high-speed, complimentary WiFi and a 24/7 concierge service.

The back of the building has also been renovated, with balconies added for light and additional space. The side of the building’s ‘riddled’ square appear to be scattered randomly, but they are placed to match the interior room division of the apartments. This back portion overlooks 3817 St. The area is subject of an urban regeneration intervention pursued  by Mayor Ron Huldai and coming to fruition at this time. Park Hamesila – track park in Hebrew, named after the first railroad between Jaffa and Jerusalem, which opened in 1892 – is a project entirely dedicated to pedestrians and cyclists, with no concessions to motorists.

This is a rarity in a city devoid of open spaces and green areas. The project includes the preservation of historical elements, including the sloping walls and pillars that supported the old railroad track, as well as the remains of the tracks themselves, on the pedestrian paths. The park runs over the red line of the Tel Aviv Light Rail, currently under construction, and is 1.3-kilometer-long.

«While we were planning this building we didn’t know what would happen with the trail rail. They kept the original trail the Ottomans built, the one that connects from Jaffa to Jerusalem. From the North part of Tel Aviv before getting to Jaffa, the train rail was underground, but mostly electrical when above, on the street level. The facade of the building is now better than we originally planned. It is now wide open, and everybody can see it. We changed it from the moment we knew that there would be a park».

«Owner Golan Tambor – an Israeli businessman – was involved in everything and it was in favor of the design from the beginning. The contemporary additions are not easy to digest. Some might say they are outrageous. It’s expensive as well: there are electric shutters, facades, windows in different sizes. We don’t have the exact number of the cost, but I can tell you it’s the highest level of construction in Tel Aviv».

«On the inside we projected all the envelopes and the interior. In the front room the walls are not polished, this is the original design – it’s rough. We decided to leave it the way it was and not to cover it». Israeli-Belgian designer Yael Siso designed the interior layout of The Levee. Hailing from Belgium, Yael Siso is known for her residential interior design, incorporating European elegance and influence into her projects in Israel and abroad.

Loft-like interiors and industrial elements run through each apartment. The walls and ceilings have been stripped back, exposing the untreated cement and in some areas, pieces of seashells can be seen buried in the original 100-year-old concrete, which was made from sand sourced from the Tel Aviv shores. With a natural and raw theme, Yael Siso chose wooden flooring to accompany the organic walls. To balance this, minimalist lighting was selected to contour the apartment lines, accentuating its geometric shapes.

The apartments are distinguished by their traditional, high ceilings – a characteristic predominantly found in the city’s first neighborhood. International furniture and design brands fashion the interiors of each apartment at The Levee, including signature pieces from Minotti, Molteni, Cassina, Moroso, Paola Lenti, Baxter, Bonaldo, Moooi, Kristalia, Saba Italia, Linie Design and Nani Marquina.

«One of the biggest markets of supply outside Italy is Israel. People invest money in kitchens and bathrooms. We spend a lot on European manufactures. It’s true that we don’t have an old design heritage, but we love design, learn fast and we embrace it. The designs here are about 15 years old, where the artists started to be creative. We don’t have Renaissance, we don’t have Baroque, we skipped all those influences. 90% of the country travels abroad every year. There is this need to go around to see and bring the inspiration back. Many buildings in the city were made fast, and made with no design, just to establish Tel Aviv as a city. Just concrete slab with no design. Even if they appear ugly, these buildings could be expensive».

Tel Aviv has always been expensive, but in recent years the prices are going up. The price for a house can be 40,000 euros per square meter. Young people often cannot stay in Tel Aviv anymore, unless they work in hi-tech (An industry in which salaries are consistent, ndr).

Neve Tzedek was the first Jewish neighborhood to be built outside the old city of Jaffa in 1887 by a group of Jews seeking peace and tranquillity. Literally, Neve Tzedek means Abode of Justice, but it is also one of the names for God. From this small neighborhood the city of Tel Aviv grew into the present metropolis.

At the beginning of the Nineteenth century, this was the headquarters of culture. Magazines were located here, and it was possible to meet the fathers of Jewish literature – Yosef Haim Brenner or Shmuel Yosef Agnón. The first cinema was opened in the city, called the Eden – today the area is being renovated.

Bar Orian Architects was established by Tal and Gidi Bar Orian in 1990. «Almost eighty people are working at Bar Orian, one of the biggest firms in Israel today. We started with renovations, building on top of buildings. This is where we landed all the skills and the motifs from the eclectic, the Bauhaus, the international style. Today we mostly design new buildings, high-rise and pedestrian bridges, offices; the building preservation is the smallest niche».