Sugar, Arezzo. Can a store change the appeal of a city?

Towns scattered around the country are rich in terms of historical buildings. They are also more accessible in terms of costs and perhaps even more hungry for fashion

The concept of the Concept Store

The term Concept Store was first used by Italian sociologist Francesco Morace in an article about the newly opened 10 Corso Como, in which he wrote: «Stores built around image are over, concept stores have begun». Almost thirty years ago a then forty-three-year-old Carla Sozzani first opened the doors of 10 Corso Como in Milan. She followed a career at the Italian editions of Elle and Vogue. Not only didn’t the term Concept Store exist, but the very idea of shopping for high fashion anywhere outside Via Montenapoleone – Milan’s all-time fashion street – seemed far away to people.

On top of being dislocated from the fashion district, 10 Corso Como was – and still is – nestled inside an inner courtyard. No store windows, natural lighting, and a concrete floor. In times when every store in Milan had marble floors and bright neon lamps, clients didn’t even understand they were supposed to go inside. It didn’t take long however before people got the memo through word of mouth. Soon enough Sozzani saw her editor’s dream come true. A live magazine, combining art, fashion and luxury lifestyle, that people could actually experience first-hand.

Because of their fashion DNA, New York, Paris and London were the first cities to follow Milan’s lead, opening Concept Stores embodying the vibe and spirit of the city: de luxe in Paris, laid-back in New York and artsy in London. But for various reasons this new retail concept proved to be a match also for other cities. For example, the former industrial areas of Berlin offered perfect locations for Concept Stores. There, rough interiors served as the backdrop for the streetwear that the city is so fond of.

Copenhagen and Stockholm, Scandinavian capitals of design, celebrated the Concept Store as the perfect blend between fashion, art, and interiors. Brands like Acne and Aaalto were set among the minimalism and warm woods of Northern-style decors.

The importance of small cities as well

One of the main concerns of anyone wishing to open a concept store is the licensing, which is needed in order to serve food and drinks, sell clothes and run art shows, all at the same time. Given the problematic shortage of houses and venues, Amsterdam has always been flexible in terms of permits and licensing. For this reason, today the city is home to a multitude of Concept Stores. They range from large shopping spots, like Hutspot, to romantic neighborhood hangouts, such as Cotton Cake.

In Italy instead, the cost of large locations in fashion-oriented cities – Milan, Florence, and Rome – has now made it challenging to open new Concept Stores. Even the pre-existing ones strive to keep things going. On the other hand, though, towns scattered around the country are rich in historical buildings. These cities are more accessible in terms of costs and perhaps even more hungry for fashion, since large international labels seldom choose to open a flagship store in a small Italian town. Especially the younger ones, who are already going strong on the catwalks and on all kinds of media, but still need to carefully plan their next openings.

Close enough to drive tourists from the all-time Italian Mecca – the city of Florence – but far enough to have its own identity. A wealthy and conservative city. Mostly known for its Middle Ages architecture and Renaissance art; the Medieval Piazza Grande, Piero Della Francesca’s frescoes in St. Francis Basilica and the masterpiece collection of Casa Vasari, just to name a few. Not exactly a fashion hotspot, nonetheless home to a concept store: Sugar. Brainchild of honorary president of the Italian Chamber of Buyers, Beppe Angiolini, who has his roots in Arezzo.

The store started off in the eighties as a small boutique in Corso Italia, the city’s shopping street. People living in small, provincial cities are interested in fashion and trends. They don’t always have access to fashion weeks and to large international fashion exhibitions, therefore they rely on magazines, social media, and on local retail, which today more than ever has to be able to offer something exceptional in order to beat its online competitors. Sugar in Arezzo was new and bold. It changed the local idea of fashion for good. It also shook some dust off and added a tinge of international glamour to the 1500s churches and frescoes.

A boutique with a European flair

Mr. Angiolini was still in his early twenties, but Sugar was growing fast, getting larger and stocking previously unseen brands. People started to come over from Florence, then from Pisa and Siena, and then from the rest of the country. Soon in Arezzo it became a thing to walk around the streets with the Sugar shopper.

A boutique with a European flair would have done marvels abroad. But Mr. Angiolini chose to stay. He was soon rewarded with an affectionate clientele. Today, Sugar counts several locations around the city center devoted to all things fashion – from shopping to events. The main location is in Corso Italia 60, inside the Renaissance building Palazzo Lambardi. 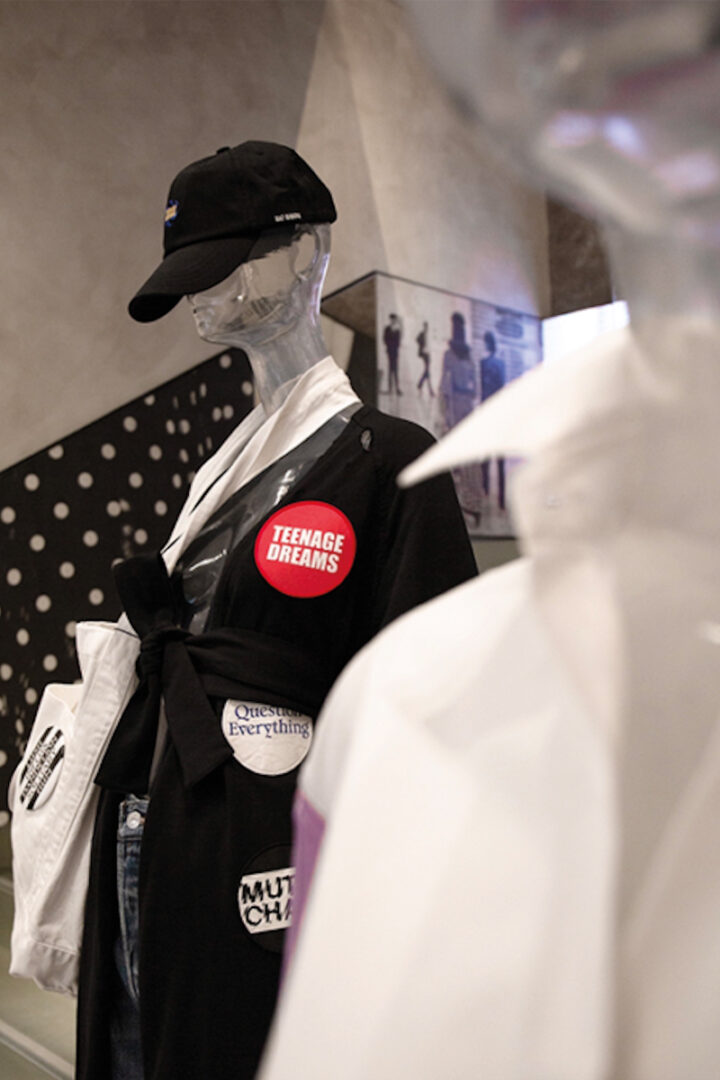 Sugar: a concept store in Arezzo

Once belonging to the noble Lambardi family, the Palazzo is one of the few examples of civil architecture with a baroque style built in Arezzo. The current Eighteenth Century configuration of the building derives from the fusion of court houses built between the Thirteenth and Fifteenth Century, enriched by an old garden.

On the inside two mosaic floors once belonging to an Ancient Roman domus, show vestiges of the city’s history tracing back to its origins in the first century A.C. The wooden ceilings and frescoes served as inspiration for the project of Vincenzo De Cotiis Architects. The professional led both the restoration of the building and the development of the Concept Store.

The entire intervention aimed at bringing back the historical memory of the building, revealing the old decors concealed by time and allowing the ancient walls and ceilings to resurface. Metal, marble, contemporary prints, and led-screens contrast with the ancient structure, creating a dialogue between past and present.

So, the Valentino and Versace collections are sheltered by a Fifteenth Century frescoed ceiling. The Saint Laurent frames a fireplace. Burberry has a ruined wall as a backdrop. A more street side of the stock – featuring Off-White, R13, Undercover as well as the sneakers – characterizes the ground street-level floor. ‘No Sugar Please’, the onsite bar and cafeteria, serves coffees and cocktails. While the top floor is now dedicated to hospitality, with fifteen designer rooms.

Educating as well as selling in Sugar, Arezzo

Clients can also find contemporary art and fashion publications all around the store. Possibly the only distributor in Arezzo and in the entire province of Dazed, Kinfolk, Re-edition, Interview and WeAre, proving the original intention of both the store and its founder. Educating, as well as selling.

Can a store change the appeal of a city? Sugar did not only add glamour to Arezzo, it actually improved the local revenues. People follow the shop’s Instagram account, and then come from all over the world for the exclusive retail-experience. Not only fashion lovers, also the art crowd and design professionals come to visit Sugar, drawn by the architecture and interiors.

Mr. Angiolini even organized a charity fashion show in Arezzo. Something that the small Tuscan city had never seen, with some of the store’s best pieces. More recently, Sugar celebrated the launch of Armani’s new handbag La Prima with a cocktail and gala. Mr. Angiolini still does the entire buying himself, inviting his most affectionate customers and international guests for previews and late-night fittings.

The Sugar store in Arezzo is a platform of curated ideas that encompasses menswear, womenswear, music, and books.