Among the speleologist and climate expert’s future plans is an expedition to Wulff’s Land cave, unexplored since the 1960s

Climate change and global warming are now a certain fact. Gina Moseley, climate expert and researcher and 2021 Rolex Awards Laureate, wants, through her work, to bring attention to Greenland. If rising temperatures are shaking the rest of the globe, it is in fact needed to focus on the polar regions. Here temperature modifications are most damaging to the environment and can also affect the balance of the rest of the planet.

The researcher explains how the polar areas are warming twice as fast as the whole globe. The risk of melting ice and the resulting chance of submerging coastal cities is becoming more and more vivid. For this reason Moseley organized an expedition to the northernmost caves of the Arctic. This will enable her to explore them and study the planet’s climate past. The scientist’s interest in these explorations starts from her PhD at Bristol University where there was a group dedicated to caves.

Here the senior members shed light on the value of organizing expeditions to Greenland. But in the 1980s and 1990s it was still complicated, which is why it had never happened. These colleagues provided the scientist with their materials as papers or literature documenting what they had already discovered. In addition, Moseley then scouted out an article dating back to 1960 about work during the Cold War. This involved finding areas suitable for emergency landings in Greenland, so they tracked down and visited several caverns.

Within the cited article, the finding of mineral deposits inside the cavities was highlighted. Something close to stalagmites, Moseley explained, that was being described in the report. In addition to being a coveted destination for spelunking because of their majesty, these caves in the northern Arctic appear almost intact from their establishment.

In fact, the place is difficult to reach and therefore the information stored are those dictated by nature, so these caves are referred to as virgin. Among the intact grottoes in particular, Moseley has recovered several pieces of information about Wulff’s Land in the far north of Greenland. According to studies, the last recorded expedition here dates back to the Sixties conducted by the U.S. military.

This would be due to the difficulty of organizing explorations in this area and the large amount of money required. Having arranged other expeditions to Greenland in the past, Gina Moseley decided this time to set up one in these Wulff Land caves. Data from the analysis of these caves, capable of delving into the past if compared to existing studies, would provide a more complete picture of climate evolution.

Why is the data from these caves relevant?

As a climate researcher, Moseley believes it is critical to be able to derive the geological records of the caves. Having already led three other expeditions to Greenland, the scientist is aware of the wealth of information that can be gleaned. In particular, the study of these caves would provide insight into warming and cooling cycles from the remote past.

These data are revealed through what Moseley calls a valuable geological secret. Within these caves, in fact, it is possible to trace speleothems, which are calcite deposits that can be dated up to half a million years ago.

While Arctic climate studies at present rely on ice cores dating back 128,000 years, Wulff’s Land caves will provide data four or five times older, the scientist explains. By recovering these materials and studying them through defined and innovative methodologies, the imprint recorded by speleothems over the years can be analyzed.

What is intended to prove, Gina Moseley points out, is the Arctic’s response to global warming by going to investigate the spontaneity of heat waves. Through the past records present in the caves, these heat periods driven by the natural course can be studied.

The process of cave exploration can take several weeks, starting with visual examination of the surface and tracing holes. Documents and studies are often followed to arrive, thanks to instructions, at the exact cavity to be examined, Moseley points out.

The work continues at a slow and gradual pace inside the cave, often during the first exploration no in-depth study is done. «It is common to run into a cave, look around, see everything for the first time and not map it, so it is still connected to the joy of being the first person to explore it», the scientist explains.

The actual exploration of the cave is done in teams, with some taking notes, others measuring, and then some observing and making photographs. There is also backward research work, in which previous explorers are consulted, who in any case did not yet discover everything about the cave, she says.

Explorations, in fact, Moseley explains, have limited time frames so it is impossible to trace everything inside the cavity. Traditional analyses performed, the scientist points out, include analyzing oxygen and carbon in stalagmites. «The oxygen tells us whether was warmer or colder during a given time, and the carbon tells us if there was soil, trees or graphite within the caves».

Gina Moseley goes on to clarify that those elements give this information in the Arctic while in other parts of the world can mean something else. Instead, uranium is used to date the analyzed stalagmite. Because of its solid state, it can be dissolved into water and is not harmful to the environment in which it is used.

Uranium, the researcher points out, gets trapped in the stalagmite and its radioactivity makes it possible to study the piece. These are the two essential pieces of information to have: the temperature and the time frame. 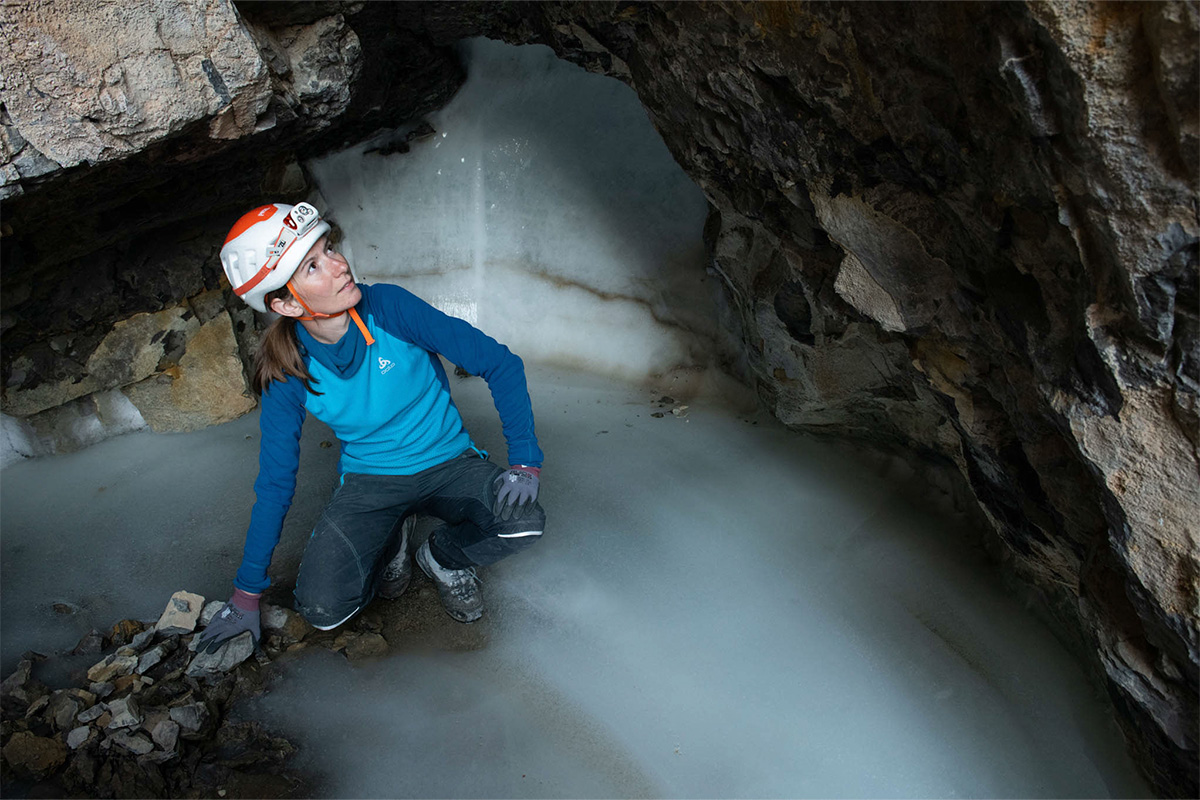 01/03 From stalagmites it is possible to extract the water that makes them up, given their formation made of small crystals

There are also different and new methods that implement the standard information and analysis cited above. From stalagmites it is possible to extract the water that makes them up, given their formation made of small crystals.

This, Moseley explains, represents a record of precipitation that fell like half a million years ago. «We can also look at the pollen that might have blown to the cave and got trapped, so this is a direct indicator of the vegetation on the surface», the scientist points out.

Other elements, such as the analysis and finding of magnesium and dextrose, may instead be symbolic of dryness or moisture within the cave over time. At last, an instrument used for these analyses is the spectrometer, and there are various types of it. Through side machines it is possible to study the elemental components by breaking down the electromagnetic radiation.

Information gleaned by the caves

The information that can be gleaned from the caves and, in particular, the stalagmites is diverse. First of all, it is possible to decipher temperature changes over time as well as those of alternating monsoons. When the data collected are real numbers, it is also possible to understand when tropical cyclones occurred and why at a particular time instead of another.

Deriving this information about the planet’s climatic past becomes relevant in the perspective of the era in which we are living. Gina Moseley declares that she has dealt with several foundations and they are very focused on creating awareness about the problem of climate change. The scholar comes out in favor of this and the actions to be implemented.

But she explains that research is also critical because it is known that temperatures are rising because of the global measurement system that has been in place since 1850. «So we have a good record of the last couple of centuries, but in the last few years the rising has been more significant. How could we have judged it without these data?» explains Moseley.

She continues, «By looking into the past, considering all the atmospheric changes, one can analyze periods with the same carbon concentration as in recent years and examine the temperature, sea levels and other variables».

The value of understanding the climate phases

The study of virgin caves, as highlighted by Moseley, is an essential step in being able to define and analyze different climatic eras. Warming and cooling cycles have occurred over time, determining crucial changes on the climate and environment of the Arctic and the entire globe. The aim of the scientist’s study is to be able to examine these data to gain a clearer understanding of the consequences of melting glaciers.

By retrieving older data, it is possible to identify the planet’s evolutions during warmer eras and to place the age we are living in a broad framework of analysis. The focus on Greenland, as reiterated above, is necessary because this area is capable of influencing the habitats of the rest of the world. In 2019 for example, states a Rolex report on Moseley, melting glaciers had a serious impact on the planet.

The aforementioned report continues: twelve billion tons of water poured into the oceans in a single day, causing sea levels to rise by more than one millimeter per month. Other factors affected include precipitation, currents and weather systems, and ice formation.

In addition, the inequality between the tropics and the Arctic may lead to a change in the planet’s pressure balance. This would, Moseley points out, lead not just to an upheaval of the climate map and extreme weather, but also affect crops and food distribution.

A dedicated researcher since the beginning of her speleology studies. Operating in particular in Northern Europe, but also in the rest of the world, her various excursions focus on analyzing caves to better understand climate change.