Lara Fluxà that interweaves glass and water, Venice’s present and past substrates

Through the deposit of water, this interaction brought a rediscovery of the silt, the material from the Canal di San Pietro

The rediscovery of the Venetian tradition

The Catalonia in Venice_LLIM collateral event presented by Catalonia in the context of the Biennale Arte 2022 aims to reconnect Venice with its substrate, present and past. In the conception of Lara Fluxà’s art project, curated by Oriol Fontdevila, the specificity of the Venetian territory played a key role.

Starting from the proximity of the Canale di San Pietro to the pavilion, the artist devised a system that intertwines glass and water. «Water and glass, two idiosyncratic materials that have played a key role in the city’s history, become inseparable with this installation; two sides of the same landscape, which is both natural and cultural», Fluxà explains.

Through this composition, a living material is rediscovered, capable of interacting with the work. Characteristic peculiar to Venetian waterways, the silt all the time modifies the glass sculptures without any predictability. Moreover, Fluxà explains, the piece echoes the layout of Venice, a city immersed in water that allows itself to evolve from the canals. Its configuration arises from the sediments provided by the rivers which flow into the lagoon; the continuous danger, on the other hand, is of sinking into the Adriatic sea waters.

LLIM, the living organism arising from the artwork

Among the materials that compose the water used for this exhibition is silt, a central element in the piece. Since ancient times this material has been known for its particular fertile capacity. Its composition is marked by fine soil particles that often contain organic elements as well.

The lagoon bottom of the city of Venice, which has been studied for several years for its peculiar texture, is characterized by sand, clay and silt. Using the tubular glass system conceived by Fluxà, the waters of the Canale di San Pietro deposit this organism in different shapes.

This has resulted in a series of rather unforeseen modifications of the artwork, which, the artist explains, will be noticed and perhaps studied at the scientific level. «I wanted to talk about an organism that can live and nourish from the landscape and from Venice: water and glass, but also life», Fluxà says.

Operation of the installation

The key element of the installation is the pump system designed and positioned within the Canale di San Pietro. The extraction of water from the banks takes place on a continuous basis to be then brought inside the Catalonia pavilion. In addition to the system of valves controlled by PLC microprocessors, the replenishment and movement of water is aided by the exploitation of gravitational force.

Through this scheme, other materials in the channel bed are also included in this cycle. The installation consists of glass forms, tubes and capsules that create what the artist calls organic shapes. Across this path, water, also circulating, interacts with other fluid materials such as oil and milk. In this encounter, a flowing performance is created that still allows the water to remain intact.

In fact, this is in an immediate way returned to the Venice water network after depositing the mud. Until the end of the exhibition, changes in the installation are expected due to just the assimilation of the subsoil of the city hosting the Biennale.

The processing of an ancient material

Glass represents one of the pivotal elements in Lara Fluxà’s art, and its workmanship derives from an ancient tradition. The artist has learned over time to work with it, aiming to create experiments in its interaction with human beings.

The installations of her works are usually placed on the floor, because this allows her to talk about limits. What is the limit that you need to have a dialogue with this project, this material, and with the balance of the installation?, this is the question behind her productions. The vibration that glass gives can be perceived depending on the relationship and approach of the observer.

«Glass has this power, because it is vulnerable but also people become fragile in relation to that and the body also turns into a malleable material», Fluxà says. The consciousness of one’s own body in relation to the glass sculptures increases as does that with the other bodies present.

The dual materiality of glass

«Usually this material is considered fragile, but for me it also has a violent power and the capacity to force us to change our behaviors when touching it», this is how Fluxà tells about his relationship with glass. The choice of substances to be used in the installation harkens back to her artistic journey, which prefers glass and fluids in the creation of its craft.

The statement explains how in the 16th century Georgius Agricola described the industry in Venice by defining glass as a fusible stone and at the same time a solid juice. LLIM’s artist shares the same thought, likening glass to a fluid capable, however, of being molded and transformed to shape others. Although glass is often seen in its solid state, in practice the processing and manufacturing stage is related to the liquid forms.

In this ambiguous materiality, glass echoes the idea of Venice, a city balanced between the solid and liquid states. «I used to work with different elements, but two of those are common in my art: glass and different kinds of liquids. I also considered the importance of glass in the heritage and the DNA of the city», Fluxà points out. 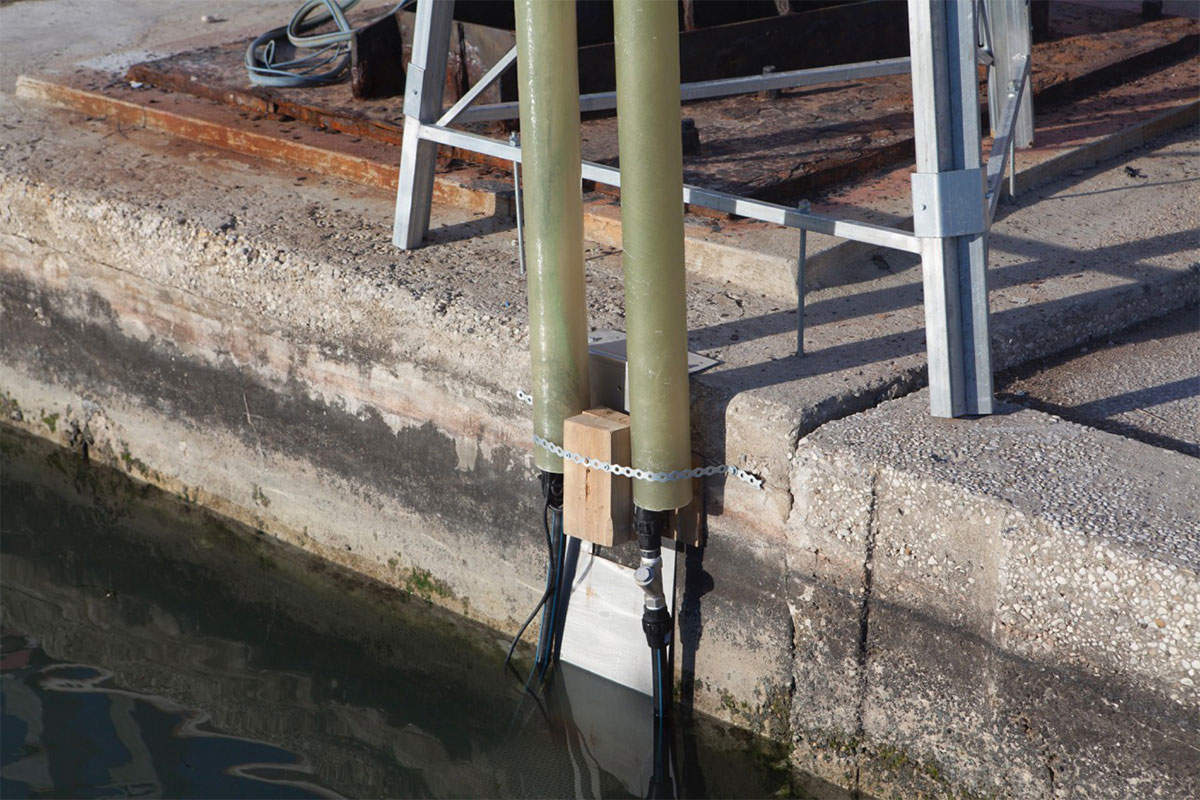 The fertility of lagoon water

From silt to black mud from the Nile, the ability of these waters to be fertile in contact with the land has been an exploited resource since ancient times. Given the proximity of the Catalonia Pavilion to the Canale di San Pietro, the artist was inspired to make this water an integral part of her piece. Involving water in reworking the Venetian city is her way of telling different information about the place.

This element also goes beyond its own materiality while offering the possibility of interacting with the silt. Because it is a protected property, several steps were taken to incorporate this material into the work. In addition, engineers were involved in creating the pump system capable of conducting water into the glass sculptures and then back out to the Canal.

The presence of water within the work is determined by the natural tidal cycle. In this way, Fluxà goes on to illustrate, her work does not reproduce something fictitious, but is symbolic of what is happening outside. Natural action is essential in the evolution of this piece of work, and the moon influencing the currents is also part of this project.

The coexistence of materials: the viscous behavior

On the coexistence and collaboration of the materials that make up the exhibition, the artist expresses herself by defining the difference in viscosity between the materials as fundamental. From the fluid of water to silt, which in ancient Egypt was referred to in Arabic as khemia, alchemy. And then the same word was also attributed to glass by its workers who used it as inspiration to transmute common metals.

In a calm progression that follows the natural rhythm LLIM runs through the work channeling the foundations of Venice, preserving and restoring them at the same time. The organism that made Fluxa’s participation in the Catalonia Pavilion possible, adheres to the glass structures, connecting them and progressively assimilating the layers that compose the place, the statement specifies. What makes the interaction of materials interesting, Fluxà points out, is the possibility of having a work that at some point escapes the artist’s control because of its connection to nature.

Through his art Fluxà explores different materials in relation to the environment from which they come. Other fluids involved are, for example, seawater, which through salinity indications can detect pollution levels in the sea. Even the invisibility of water contains a wealth of information about its surroundings.

Motor oil is another substance involved in the previous works, and although it is shown to be shiny-looking, almost like a mirror, it returns information about pollution and ties in with social concepts such as capitalism. The evolution of the LLIM artwork, through silt, has allowed on the bottom of structures to lead to the development of microorganisms.

Since the end of April, the time when the installation began, the first changes in terms of shape and the emergence of new organisms are beginning to be observed. Fluxà explains that evolved silt forms are a discovery every day and that it will still take some time to analyze the phenomenon in its wholeness.

However, the artist is aware that the city of Venice and its ecosystem are suffering in particular from the large ships that coast it and the massification of tourism. This continues to represent a great risk to the waters and silt of the lagoon. Fluxà’s work has a conscious focus on the relationship with the ecosystem and the possibility of nourishing the latter.

Artist based in Palma and used to work with poetic elements like glass or water. In the continuing exploration of ecosystems, after earning a bachelor’s degree in Fine Arts and a master’s degree in Artistic Production and Research at the University of Barcelona, she specialized in glassmaking.