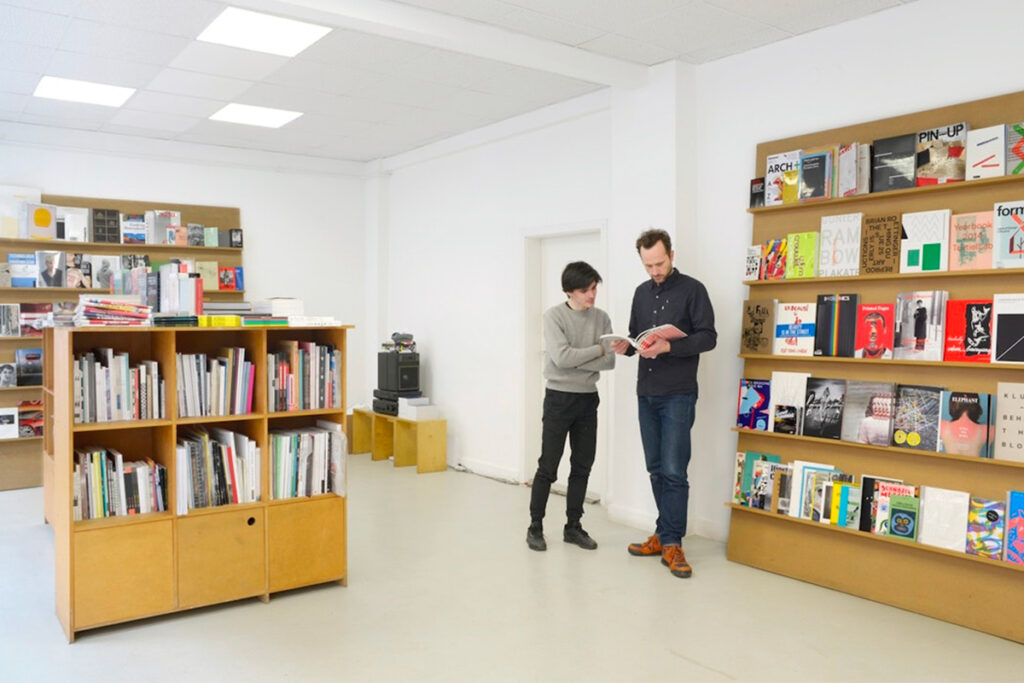 Mzin in Leipzig, Multidisciplinary Interactions in a Magazine Store that mimics a Gallery

Turning a university project into a career, Philipp Neumann renews Leipzig’s history in publishing through a magazine store for design and culture

Leipzig – The Cradle of Print

Back in 1650, the printer and bookseller Timotheus Ritzch (1614 – 1678) created the first daily newspaper in the town of Leipzig, Germany. It served as a landmark moment in the history of publishing. In Europe, over time it flourished and continued to spread like nowhere else in the world. To this day in Leipzig, locals and visitors can visit the Kolonnaden Viertel that came to life in 2008 as a magazine store. The founder of Mzin, Philipp Naumann has clear missions he hopes to accomplish.

His story begins thirteen years ago, while Mr. Naumann was studying Graphic Design at the Leipzig Academy of Fine Arts. There, he designed a magazine shop as his final project. His new store, Mzin, began as a cardboard box model. Upon graduation he went on to rent a space in South Leipzig and finally opened the real deal. A few years later he moved Mzin to its current location, situated in the Eastern side of the city. Mr. Naumann’s, professional and life partner Karen Laube stuck by his side since the beginning.

Suddenly, tragedy struck. This time it was the 2008 global recession and publishing companies were not exempt from the shockwaves of the crisis. Print material was transitioning towards online. Independent publishers were left behind during this digital renaissance. Mzin wasn’t fazed by this crisis and new wave. According to Mr. Naumann, the industry needed a renewal. He feels that readers need to touch physical objects, feel the texture of paper, smell the new smell of the books. At the end of the 2000’s, there was a great revival of self-publishing within art and design, which thankfully has lasted thus far. According to Naumann, «The internet is a source of information, but it cannot replace the energy and appeal of a printed magazine».

The meaning behind Mzin

Mzin is an acronym that refers to the term ‘magazine’. Mr. Naumann created the term to entice visitors to enter the shop. Visitors pronounce the letters separately, others say ‘m-zin’, the best part of the name is that it’s completely open for independent interpretation. Mzin is a home to publications from a variety of cultural aspects, from fashion, design, architecture, art and pop. Mr. Naumann also sells poetry and literature, next to books dedicated to western, oriental, and Arabic culture, and if that isn’t enough, he also sells vinyl records and of course, prints.

One of Mr. Naumann’s friends told him that his approach to culture is Postmodernist. He explains that when he was in Ghent, he discovered a record store selling records that didn’t respond to a specific music genre, but to a mood. The motto of this store was goodbye categories, hello mood and that resonated with Naumann. He created Mzin to be a space with no barriers, and human interaction at the heart of the shop’s identity.

For example, if a customer comes in from Milan and is searching for a book about Virgil Abloh, Mr. Naumann would ask the customer if they knew that Virgil came from an architectural background. There, in that moment, the chances of that exact client asking for the book about Abloh eventually going home with a book about Chicago architecture increased. Mr. Naumann advises people and guides them to make connections that they may not have made on their own, or let alone the internet. He wants people to connect the dots. For Naumann, the connections bring us as humans, full circle. 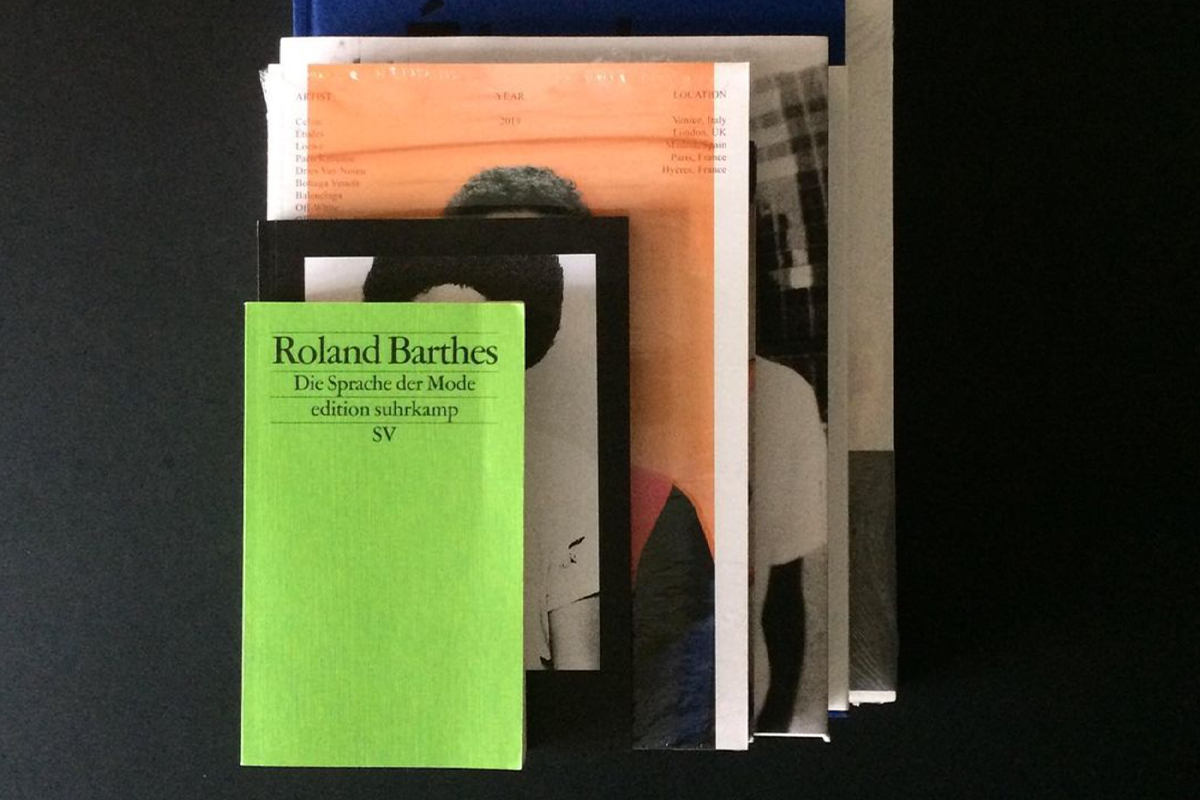 Before his beloved bookstore opened its doors, Mr. Naumann worked as a DJ, spending his time around record stores in Leipzig. One can make the connection between Mzin selection of vinyl records and Mr. Naumann’s background. His time as a DJ in a vinyl shop installed within him a ‘do it yourself’ mantra that characterizes subcultures since the 70’s.

He wasn’t just selling records, Mr. Naumann was meeting people, organizing parties, designing posters and invitations. It was an experience that allowed him to really understand that he goes out of his way, outside the mainstream. The type of people he was interacting with designers, with a background in graffiti art, or fashion designers with a past life in skateboarding. According to Naumann, these interactions are things you can’t learn through an academic experience.

One thing Mzin prides itself on, is the selection of German-based and international magazines, with of course publications in English. Opening a dialogue that addresses a local and global audience requires the dedication and time to satisfy the needs of a creative industry that is constantly transforming. Mr. Naumann reverts to his daily routine that helps him stay curious and aware. He begins early in the morning, listening to podcasts and the radio. If he hears word of a designer, publication or photographer that he’s never heard of, he researches and orders copies of their work.

Outside of Mzin, Mr. Naumann and his partner Ms. Laube are active in the design and art communities and are frequently organizing conferences, festivals, and teaching abroad. By doing all of this, they get in contact with fellow creatives who further open their eyes, as the magazines they put out for sale at Mzin are a source of knowledge.

Mr. Naumann gives an example, «I read 032C, a fashion and art magazine from Berlin contributing to contemporary cultures, and Pin-Up which is based in New York, to remain updated on what goes on in photography, design and architecture». He goes on, «System was a zine that kept me company during lockdown with interviews to creatives, one of their issues before the pandemic was dedicated to Miuccia Prada». Never too far from the founder, is Purple magazine. He brings it home whenever he can.

Which magazines get in, and which are stay out

Mzin strives to attract the attention of creatives that are in university or taking their first steps within a creative industry through magazines. Among the magazines in the store that’s garnering attention is Off the Rails, a magazine that was born from a creative agency. The magazine may be classic in its structure, but beautifully features a careful selection of artists, photographers, poets, and musicians linked to a contemporary youth culture.

Another publication on Mr. Naumann’s radar is New York based Tunica. This magazine features cover illustrations, photography and editorial articles, along with functions, and interviews providing an alternative to the contemporary arts community. However, the colors, covers, and design are visual ideals that came from the web. Finally, Ansinth that is based in the UK is popular amongst young creatives interested in contemporary fashion and aesthetics, according to Mr. Naumann.

Mr. Naumann and Ms. Laube carefully handpicked every magazine in Mzin. Every publication has a scope of photography and visuals, along with being printed on high quality paper. «When I look at their design, it has to please my eye and make me say to myself that this is something I have not seen before». Mr. Naumann spent hours looking through a zine with no relevance editorially, but only to look at the advertisements. «My brother tells me that these are pictures, but not to me, these images convey meaning, while content is in the form and you cannot separate the two», he claims.

Out on the Town

Mr. Naumann stated that he wants Mzin to be like a car, through where he can curate and host conferences, exhibitions, and events to resemble a gallery. He is currently in transit from theory to practice. When he designed the store, he carefully analyzed contemporary galleries. From there, he created a neutral environment through wooden shelves and white walls.

The idea behind the specific arrangement of the magazines was to highlight their covers, therefore treating them as a work of art. They don’t have dedicated sections to certain genres as regular bookstores have. The clients are utter professionals and curious that come to the store regularly and they know exactly where to go to find what interests them. Mzin shifts covers regular and tends to keep also previous issues on their shelves.

Over the years since the founding of Mzin, the store has staged over 100 events. Mr. Naumann and Ms. Laube present releases of creatives and publishing houses from Leipzig, Spector Books for example, as well as from overseas. They organize book launches as exhibitions, such as Zang Pat Phuwut, a self-published book investigating the theme of visualization of sound in 80’s comics. The walls of Mzin were plastered with loose pages of the publication. Recently, Mr. Naumann has worked with a textile designer who presented an edition of carpets.

Mr. Naumann utilizes the Mzin website as a tool to communicate with his customers. The section of the website dedicated to conferences, lists a series of events dedicated to visual culture and graphic design. These projects don’t just speak about Mzin, but also refer to who Philipp Naumann is outside of Mzin and what he does outside of the store.

Since 2014, he has been curating Die Designers, which is a design festival in Leipzig, with lectures related to graphic design and visual culture. This section of the site helps Mr. Naumann keep track of the events as time goes on, while also allowing people to be informed of what he is currently doing. «This is reflected by the font I chose for the website…it reminds me of a typewriter», he claims, referencing the connection to Mzin, the magazines found within and the history of Leipzig. As Mr. Naumann says, it’s all about connecting the dots.

Mzin is an independent bookshop for visual culture in Leipzig, founded in 2008 by the graphic designers Philipp Neumann and Karen Laube.