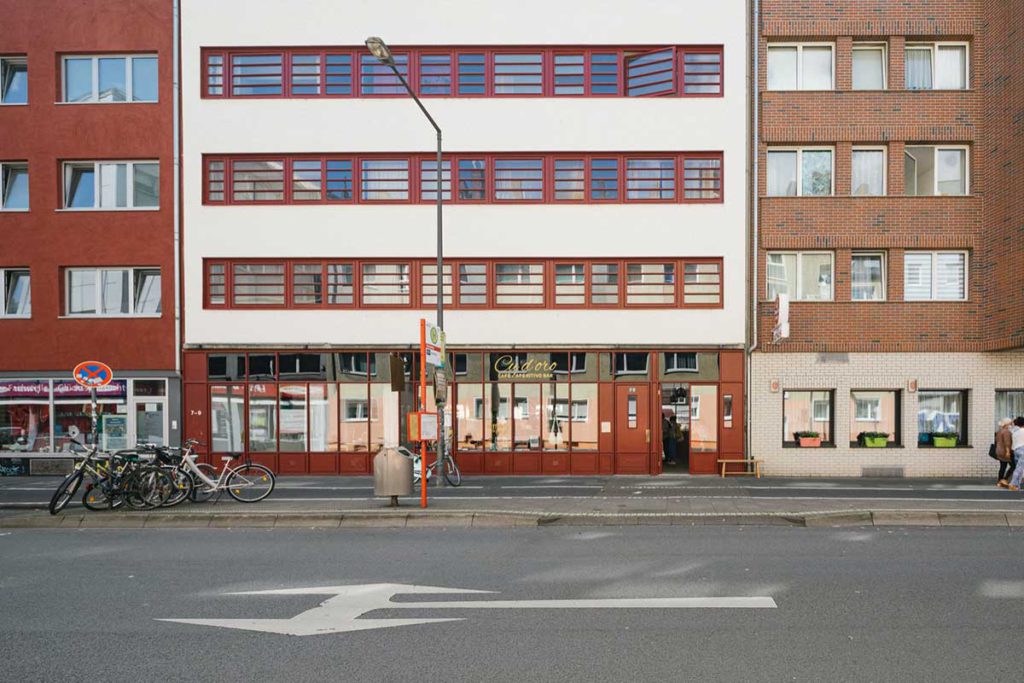 Funk Magazine, Köln: «We had planned for it to be a pop up in the initial plan»

Funk states that magazines published through independent means have a sustainable value to it. They become pieces that can be archived by its owners

The word ‘Funk’, as Olga Funk shares, holds a number of meanings to her. When looked up in the English dictionary, « there are a few ways to see this. The way I understand the word is that it means a music genre. In German, the word has one meaning – radio waves».

Formed in August of 2020, during the second wave of the pandemic, Funk established a magazine store in dedication to magazines of independent-origin and its makers. Now eight months old and located in Krefelder Straße, a train ride away to the heart of Köln, Funk Magazine is an introduction to the people of the city to consuming obscure magazine titles.

The store is on the route to assess and make changes to the word ‘Funk’ through the curation of reading materials sold and events held in the space. Funk had settled into the city after emigrating from Kazakhstan twenty years ago. Her surname, one that is not of the norm, was inherited by her through her German grandmother. «I was not keen on using my full name when taking on freelance roles or while I was growing up. The shift occurred when I attended university».

Funk, a graduate of a degree in Communication Design from the University of Applied Sciences, Niederrhein shares that she had taken a break in between her degree, flitting to Central Saint Martins taking on a program in Design and Interaction. «At the time, we did not have an opportunity to have a transfer program. I then took a break from my degree in Germany and moved to London». Her time in university was eye-opening as she was stunned by how her name had garnered attention from her lecturers. The celebration of her surname urged her out of her cocoon.

The formation of Funk Magazine took place for over a period of eight years. In the time she was constructing her ideas and motives for her store, she took on freelance roles as an editorial designer for corporations in the area. Her time spent in editorial work urged her to churn out works made by herself. Titled ‘Funk Editions’, she published works that she edited and managed herself.

While doing this, Funk has spent time with CityLeaks Urban Art Festival on urban art research projects as of 2019. Through this initiative, two project based publications emerged. Re/discover. urban art & research in Amsterdam. And, re:public. CityLeaks Urban Art Festival in Cologne. Funk began collecting magazines – a craft she had picked up from her time spent in London. There, she began collecting and drawing ideas from works published by independent-magazine makers and publishers.

The essence of the locale in Ms. Funk’s research

Ms. Funk’s ardor and passion for editorial design value and crafted content through slow journalism pushes her to strive as an editorial designer. «I spent my time in London with a hole in my wallet. I was at MagCulture throughout my time there, browsing, buying and drawing artistic direction for my work». Funk shares that the work produced by creators through means of self-funding and away from renowned publications disseminate a set of beliefs and idealisms that are unfiltered.

It was through this approach that she poured into her personal work, which gave route to the founding of Funk Magazine. «I have found creative freedom in magazines and a liberation in my name. It made sense to name it after two aspects I cared about: my identity and magazines. Funk Magazine is a way I get to represent these magazines and is an extension of my past work».

Ideas for Funk Magazine are drawn from magazines, its makers and stores that carry self-made magazines. «While some titles overlap between stores, when I travel to destinations, I seek out stores that carry self-published and independent-magazines. The essence of the locale is what I intend to gain through them». The store carries magazines that are not in circulation and are rare in publication in the span of a year.

Funk states that magazines published through independent means have a sustainable value to it – becoming pieces that can be archived by its owners. Diverting away from mass consumption of printed media is how Funk Magazine stands apart from those in similar business models becoming a haven for creators.

Funk herself takes her time in showcasing materials and the works of the creator to the people of the city. Occurring every six weeks, Funk and her partner, Georg Barringhaus showcase works of the creators taken from the magazines they are attached to. «For the time being, we are presenting photographs captured by Johanna Tagada Hoffbeck and Kohei Yamamoto from Journal du Thé, a magazine on tea culture».

Funk Magazine lies in a three hundred square meter store, a rectangular lot that stretches out to a garden that is shared by the store and the neighbors of the building. Funk had been in the process of scouting for locations – a process that has been carrying on for a number of years. It was a happenstance that brought her to Funk Magazine’s current location. Funk was then introduced to the landlord, an individual who was intent on preserving the culture that was tied to the area. «Rent was affordable, the space was what we were on the lookout for, and the location was a stop away from the central-station».

The building that hosts the store was once a car park with a passageway that led to the backyard, where the cars would be parked. Funk shares, «The building belongs to renown Köln architect, Paul Böhm. He renovated the building, removing the car park and repurposing the area into an event space».

The lot is minimalist in design. While the space is limited in size, the design of the store elevates the space. Windows are in an industrialist design – colored red frame similar to the bricks of the house and the backyard. There is one entrance and one exit that leads out to the shared garden. The interior was designed, in entirety, by Funk and Barringhaus. Funk had set out with a mindset to ensure that furniture could be taken out of the space once they were done with it. «We had planned for it to be a pop-up in the initial plan, hence the furnishing sequence. We carried on with the plan as it was feasible».

To save costs and use limited materials to ensure a green carbon footprint, Funk and Barringhaus created shelves made from construction beams and wooden slats on one end of the wall. The opposite end holds frames made from construction beams as well. «We had made these fixtures in a series over time – stacking them together to form a geometric language».

In addition to that, they made a counter and painted it red to match the entrance door. The couch that resides in the store was acquired from a friend’s apartment, in red, matching the door and counter. «In the case we need to move, I can remove these pieces and take them with me. There is no wastage and there is no need to buy replacements». The last piece of furniture is the neon sign leading to the entrance to the store, an acrylic sign designed by Funk as well that glows in the dark. «The lack of budget has allowed us to get creative». 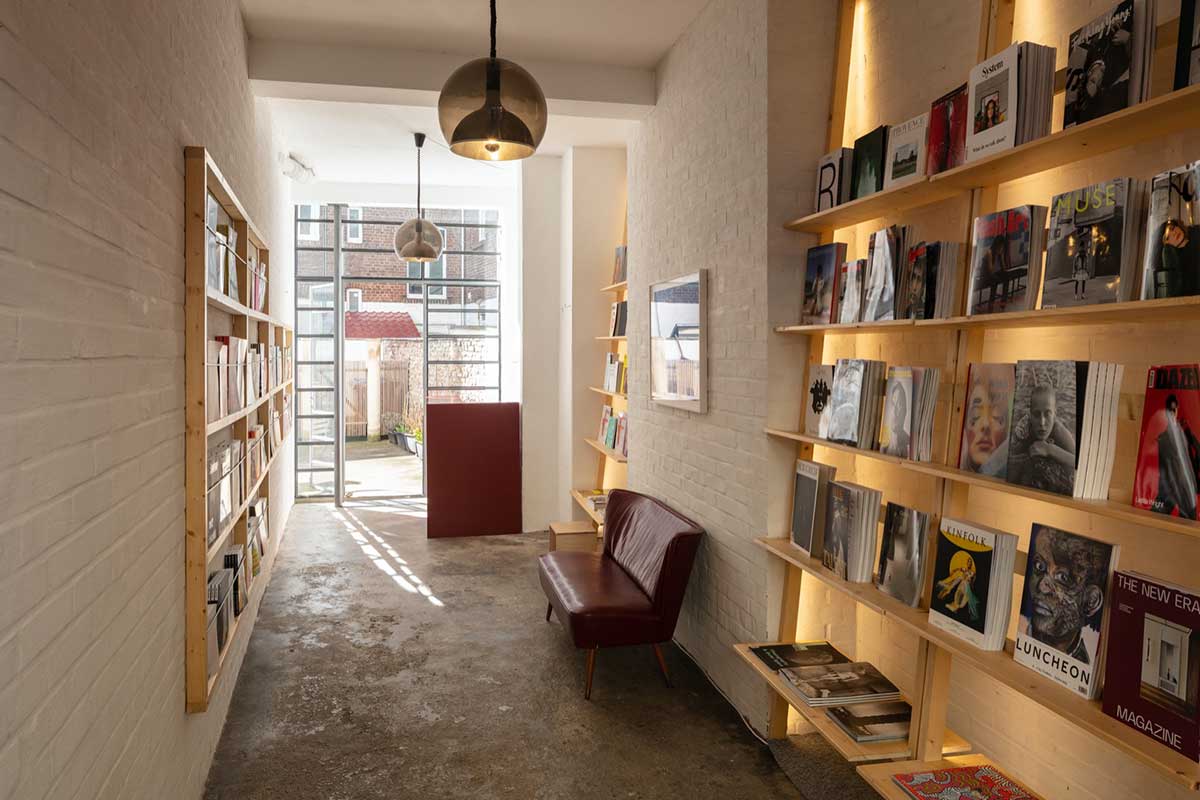 Funk is located in a melting pot of cultures

Funk explains that the area where the store is located is a melting pot of cultures. When she first emigrated to the area, she shared that it had welcomed her with open arms. There was no disconnect due to the history and culture of the city. There is a Turkish, Italian and German corner where Funk Magazine is located.

This clash has allowed for amalgamation for Funk herself and those who came before and after her. While Köln is familiar in the arts and cultures scene, hosting design universities and agencies, Funk Magazine was the first of its kind. Funk, while at an independent bookstore in Munich had inquired on why they were not keen to open up another store in Köln. The owner shared that they did not see a market for a bookstore as such in the city.

Managing the store by herself, Funk carries out her role day in and day out. Utilizing her platform on social media to connect the bookstore to its buyers, Funk explains that it has been an achievement. « Our website is used as a directory, and we operate through social media. The issue of communication with Funk Magazine’s buyers has been solved. We share updates and take orders on magazines».

An effort made by Funk herself to deliver the magazines to her customers in the surrounding area, she delivers them via bike rides. «I ride a bike and drop off a customer’s order. While I offer in store pick up and shipping options, I am fond of hand delivering it as I am able to connect with the customers».

Funk’s role in the bookstore overlaps with each other – managing the finances of the store, communication with buyers, publishers and sellers and subscriptions managed by Funk Magazine. Funk shares that the subscription packages are curated by her on a monthly basis for design studios and magazine collectors. Arranged at the beginning of the month, Funk contemplates titles and contents of the magazines for the subscription packages.

Browsing and taking a glimpse through each magazine, she presents titles she finds eye-opening or informative to her buyers. «Magazines are a route to enrichment in the sense of culture. Funk Magazine plays, in a sense, a role of educators of information».

Consumers and buyers of Funk Magazine vary in professional background – an indicator for Funk that its presence in the locale has acted to enrich the city. Carrying one hundred and fifty titles at a time, Funk accepts the works of up-and-coming publishers – a belief that is of great importance to her and Funk Magazine’s brand.

Available in genres, magazines in music, art, fashion, architecture and photography are carried in Funk Magazine. «Some titles include MacGuffin, The Weekender, Monu, Kajet Journal, Beauty Papers and Jane Magazine». In the near future, post-pandemic, Olga Funk intends to use her space in Funk Magazine to integrate magazine culture into the locale and to partner with businesses in the area.

Formed in August of 2020, during the second wave of the Covid-19 pandemic, Funk is a magazine store in dedication to magazines of independent-origin and its makers in Cologne, Germany.