The issue of water scarcity and pollution

Oceans and major seas constitute about ninety-seven percent of the planet’s water, while three percent of the planet’s water is fresh. Water scarcity can refer to shortages due to institutional negligence and a lack of proper infrastructure or a lack of availability caused by insufficient physical storage. Water scarcity manifests itself as both a natural and a human-induced phenomenon. In the present day, water scarcity is caused and exacerbated by climate change and its consequences, such as altered weather patterns in the form of droughts and floods. Water pollution and overuse are among the anthropogenic causes of the lack of adequate available water resources. Water scarcity impacts every continent, with two-point-three billion people living in water-stressed nations and 733 million residing in high and critically water-stressed countries (UN). Due to its hot and dry climate, Western Asia and North Africa are the most water-stressed regions on the planet, with twelve out of the 17 most water-stressed countries located in those areas (Aqueduct, World Resources Institute).

The use of water through the history and nowadays

Throughout history, human civilizations all around the world have bloomed when located in the proximity of rivers, seas, and major waterways. From the beginning of written history (c. 3100 BC), the Sumerians and Akkadians, Assyrians and Babylonians were able to build the so-called cradle of civilization in Mesopotamia, in the area of present-day Iraq, Turkey, Syria, Kuwait, and parts of Iran, between the rivers Tigris and Euphrates. The ancient Egyptians established a long-lasting and flourishing civilization that was situated and connected to the river Nile. Between c. 3300 BCE to 1300 BCE, the Indus Valley Civilization (IVC) prospered in the basins of the Indus River and its tributaries that flow out of the Himalayas. Ancient Rome developed along the banks of the river Tiber, the third-longest river in Italy and the longest in Central Italy. In the Middle Ages, the Maritime Republics of Venice, Genoa, Pisa, Amalfi, Ragusa, Gaeta, Ancona, and Noli were Thalassocratic city-states that dominated the trades in the Mediterranean basin thanks to their direct access to the sea. In the present day, about forty percent of the world’s population lives within 100 kilometers of the coast (UN). Sizable metropolises across the globe such as Rotterdam, London, Lagos, New York City, Shanghai, Tokyo, Hong Kong, and Buenos Aires have easy or direct access to bodies of water, which facilitates trade expansion. Water is the name given to H2O when at its liquid state at standard temperature and pressure conditions. Water is present on Earth in a variety of forms, including rain, fog, ice, snow, and vapor. On the planet Earth, water is present in bodies of water such as seas and oceans, rivers, and lakes. It is found in mountain glaciers, in the ice caps of Antarctica and Greenland, and in the form of groundwater beneath the land surface. The water that contains low concentrations of total dissolved solids, such as dissolved salts, stands for human civilizations and for the world economy. Water is employed for cooling and heating and is the medium that allows much of the world’s long-distance trade of commodities, as about eighty percent of the world’s traded goods are carried by sea (UNCTAD). Humans utilize water in plenty of activities that are key to our survival and wellbeing, such as sanitation and cooking. Agriculture takes up the largest share of human water usage, with about 70% of the world’s freshwater utilized by humans being employed in agriculture (FAO). Notwithstanding the crucial role it plays in our lives, water is inaccessible for many. Around the world, two billion people, twenty-six percent of the world’s population, lack access to safely managed drinking water. Three-point-six billion people don’t have access to safely managed sanitation, and two-point-three billion people lack basic hygiene (UN). 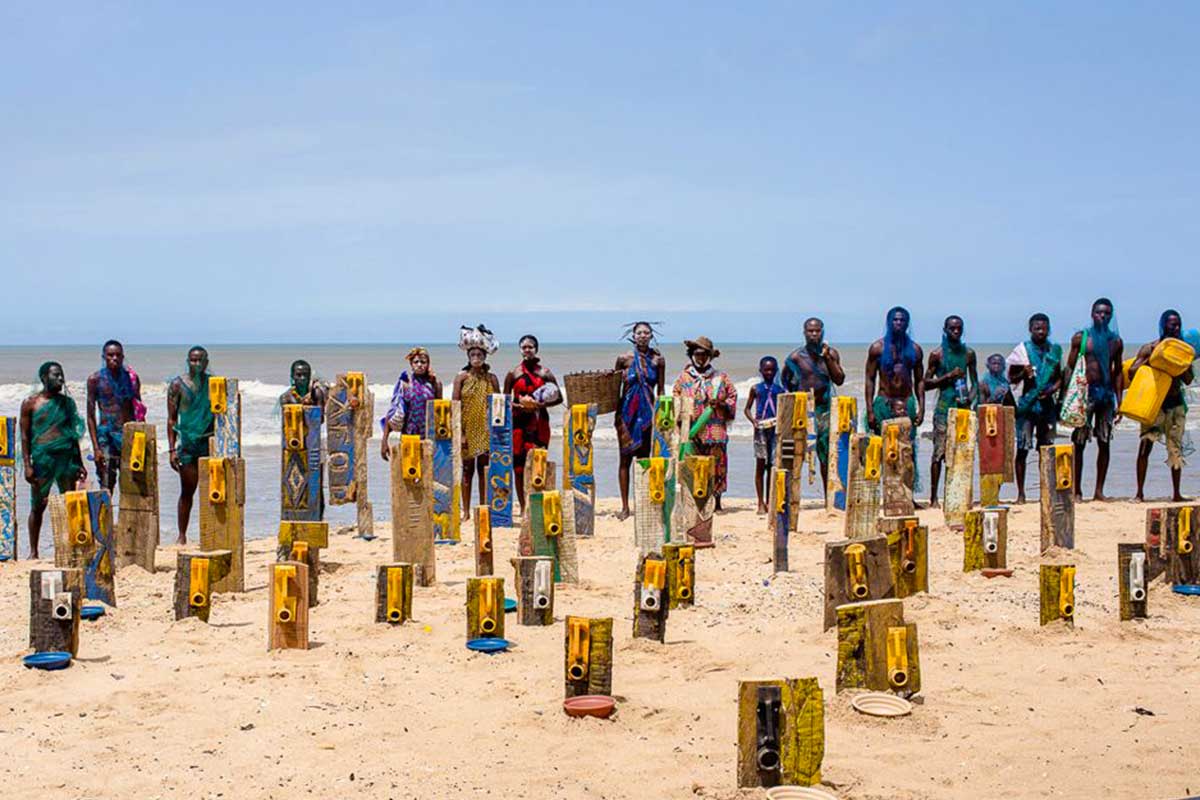 The relationship between heatwaves and rainfall deficits

Between 1970 and 2015, natural wetlands decreased by thirty-five percent, three times faster than forests (Ramsar Convention on Wetlands, 2018). Between 2000 and 2019, each year, the world’s glaciers lost 267 billion tons of ice on average (Hugonnet, McNabb, Berthier, et al. 2021), which is sufficient to submerge under six meters of water the entire surface area of Switzerland on an annual basis. According to the National Oceanic and Atmospheric Administration (NOAA), severe to extreme drought affected around thirty-six percent of the contiguous United States as of the end of June 2021, marking an increase of about eight percent from the previous month. Around four percent of the contiguous United States fell in the severely to extremely wet categories (NOAA National Centers for Environmental Information, State of the Climate: Drought for June 2021). Data from the European Drought Observatory showed that for the third consecutive year in 2020, central Europe experienced dry conditions that were out of the ordinary. Following the dry of spring 2020, July 2020 was drier across areas of west and central Europe such as France, Belgium, and southern Germany. North-east France and northern Germany experienced relevant precipitation and soil moisture deficits over the same period, and dry conditions have affected central Scandinavia and Iceland starting from August (European Drought Observatory, 2020). Heatwaves play a role in exacerbating the consequences of preexisting rainfall deficits, as high temperatures maximize the evaporation rate of water from the ground in a substantial way, increasing the demand for water for consumption and further augmenting the drought’s severity. In late July 2021, a heatwave expected to be among the most severe in decades hit southeast Europe with temperatures as high as 43 degrees celsius in Albania’s central Dimal region. In late June 2021, Sicily had experienced similar temperatures with highs of 44.5C in the inland areas.

The urge of decarbonization

Human activities and the greenhouse gas emissions (GHG) they generate are causing changes to the global climate that fuel extreme weather conditions. To keep the planet livable, decarburization is necessary. The achievement and management of healthy ecosystems and the conditions needed for human survival and wellbeing are unachievable without using resources in a way that allows us to meet current needs without compromising our ability to meet them in the future. Creating a holistic system that involves sustainable agriculture and economic systems and efficient wastewater treatment coupled with the tackling of water pollution is key to climate mitigation and adaptation. «The sustainable management of water resources consists in the identification of strategies for the use of said resources that take into consideration two aspects: the ability to satisfy the different current water needs and at the same time to preserve the resource from both a qualitative and quantitative point of view in the short, medium and long term. When it comes to managing water resources in a sustainable manner, the first aspect to consider is the weather-climatic variable, which consists of how the thermometric regime and the pluviometric regime vary over time and space. The way these factors vary over time and space determines how water resources vary over time and space, but there are resources that, in the absence of rainfall after a few months, start declining and others that are impacted by conditions of prolonged drought. It is not a given that the same meteorological condition determines the same impact on two different water resources», says Emanuele Romano PhD, Researcher at Water Research Institute of the National Research Council (IRSA-CNR). «To prevent droughts-induced water scarcity, action must be taken on two levels. The first is that of usage and consists of reducing water use in the various macro-utilities, which is complex because many other factors contribute aside from the meteorological-climatic one. In the irrigation sector, to implement changes and improvements in irrigation techniques that lead to water savings, it is necessary to take into account many factors such as all the economic aspects connected with the economic structure of the area in which you want to intervene and the local technological know-how. The irrigation sector is the most water-intensive, and in Italy, between about sixty and seventy percent of the water usage is attributable to the irrigation sector. The second aspect is the resilience of the supply systems, whereby resilience means the ability of a supply system not to be hit by periods of prolonged drought. The available tools we can employ to increase the resilience of the systems are an increase in storage capacity, a decrease of water losses, and an increase in the development of interconnection between different water systems. Which of these approaches is to be preferred depends on the characteristics of the individual water system and the actual impact that each of these measures can have on the territory».

A researcher at the Water Research Institute of the National Research Council of Italy. He graduated in Physics at the University of Milan, where he obtained a PhD in Earth Sciences. Since 2013, Romano has been teaching hydrogeological modelling at the Sapienza University of Rome.