Marìencò, Milan. A space of silence, research and discretion

Located in Via Ampola 18, in the Ripamonti area of the city of Milan, is Marìencò. Discretion and protection are the two aspects characterizing the concept behind the place, launched by Marinella Rossi in 2007. The founder’s heritage has been synonymous with the world of hospitality starting from her childhood.

Ms. Rossi’s family, in fact, owned a restaurant in the Seventies. Rossi then opened her own reality, Il Genovese, which provided her with a Michelin star. An accomplishment that she still remembers with pride, being one of the few women carrying it, back in those days. She continued her professional path through a space in Corso San Gottardo, where she mostly developed external events.

Rossi’s vision for Marìencò started growing during her time at Il Genovese, where she used to take care of some of her clients’ private celebrations. Marìencò, therefore, was born from the willingness to mix internal and external hospitality. The founder confesses her dislike for words like catering or banqueting, as she feels they don’t represent Marìencò’s reality. The concept, in fact, does not only include the preparation of the food. It also features the set-up, the way it is proposed and presented to guests.

Marìencò in Milan, «an accumulation of objects, but maniacally ordered»

Marìencò is located in a former mechanical workshop. Rossi selected the place, after visiting several spaces. The building – which immediately caught the founder’s attention – is divided into two floors. During the renovation process, every detail aimed at providing to both staff and guests a place where everyone could feel at ease. From the flooring and fixtures up to the space dedicated to dish washing.

A tailor-made approach marks Marìencò’s vision. «We start from a fabric, which is the product. Then, we develop a concept by respecting clients’ requests; a proposal that must take into consideration transparency and seasonality». The founder considers Marìencò as a home, a protected environment. The place is open by reservation only. The entrance is selected. «Who visits us is a bit like us. We mirror our clients».

Rossi defines herself as a «hoarder». She describes her space as «an accumulation of objects, but maniacally ordered. I find things I like, I mix them, and I set them up». It is an archive, developed from the founder’s taste for seriality. Her favorite room is the wardrobe, a space which includes matching tablecloth and uniform covers.

«I would describe my vision as a mix between traveling and a personal desire to know things». Traveling is, in fact, one of the elements that shaped Marìencò’s development. The willingness to find certain objects pushed Rossi to search for them and to find them, moving from one place to another. «Imagining certain things, I had the possibility to find objects, to respect them, to set them up». 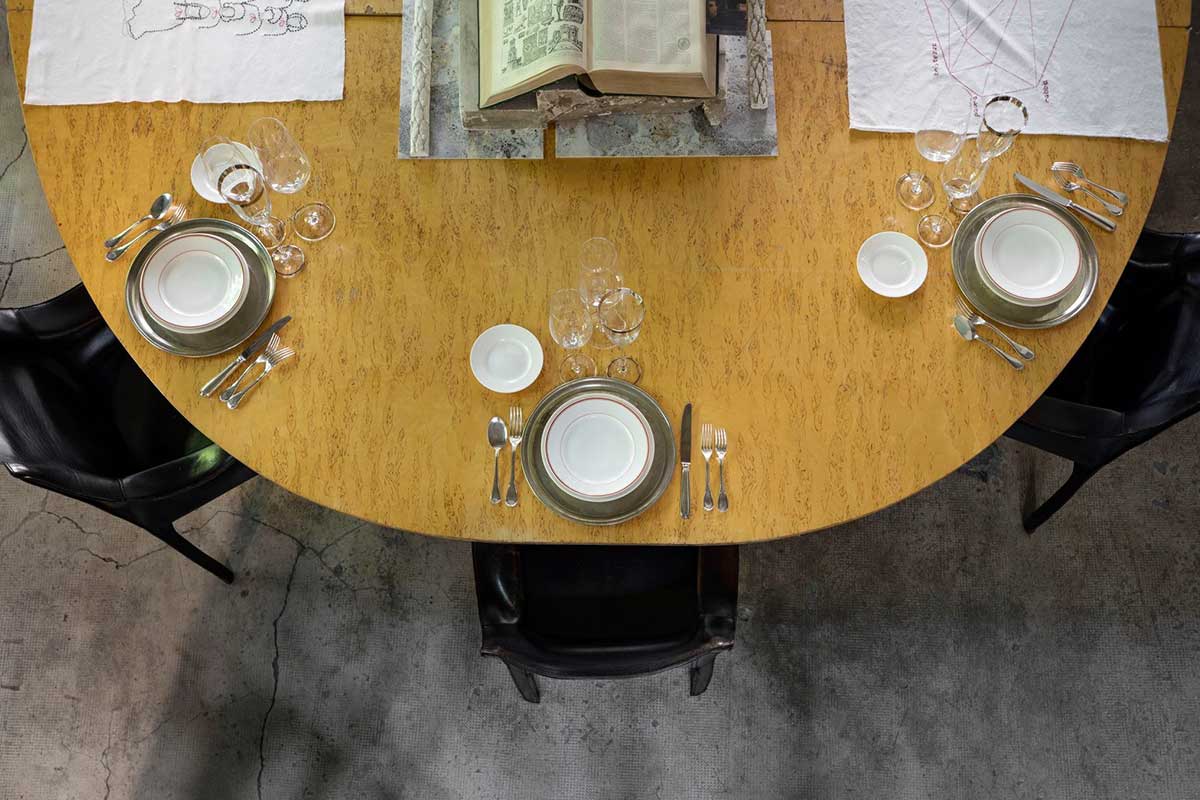 Nature represents another aspect of Marìencò, through the presence of a garden, which was once a courtyard. It is filled with plants, like the Canadian vine, providing a mix of colors. The founder describes it as «a moving angle» as it always welcomes both staff and guests in a different way.

For Rossi and her husband – both interested in the natural world – the garden represents the possibility to discover nature, while observing it. The outdoor space, like natural elements do, transforms itself, based on the changing of seasons. This concept is also related to the passing of time. A time Rossi shares with her family, «where our children represent the path that continues and progresses».
Sustainability marks Marìencò’s concept. From a structural point of view, interventions on the former building have been limited as much as possible while renovating it.

As for the food, growing up within a family owning a restaurant, Rossi has always felt the respect for the land. «Everything that we search for must be respected by us and by the individuals producing it. When you choose a product, you have to remember that there are individuals behind it». Further, the founder has never forgotten her Ligurian heritage. The region of Liguria is, in fact, featured on the culinary proposals. Either by product or dish.

Marìencò has already developed a vision for its future. It carries the name of Maè, an association. The Covid-19 pandemic – which led to the closure of the space for a long period of time – represented the starting point for this new activity. «That situation has inspired us. Even the most difficult things can give us the possibility to think».

Through the launch of Maè, Marìencò opens its spaces to the city of Milan and its community. A dining room, Il Mezzogiorno, provides a selected number of guests with a list of ingredients substituting the description of dishes. A grocery store – in between the greenhouse and the garden – has been developed in collaboration with culinary consultant Nicolò Scaglione. Finally, Edizioni – a series of initiatives focused on food culture – takes place, also through collaborations with artists and friends.

One of the main objectives of the association is to develop training activities for those who consider work and discipline as a means to find themselves. Further, Maè also wants to promote realities characterizing the national and international food supply chain. Rossi declares that the willingness to open the association was born a long time ago. «Life dictates our timing. One has to learn to wait». She underlines that Marìencò and Maè don’t represent two separate entities. The association has been integrated into the concept of Marìencò in an organic way. A plus – connecting the two realities – represents the imagery in her mind.

«We have always done things in silence, and we want to continue by doing so». Rossi confesses her difficulty in talking about her own work. She much prefers creating and developing. «I have always been more eager to do things, rather than talking about them. I consider acting as a language».

Understatement is one of the concepts marking her vision. «I would like Marìencò to remain a silent place, as it has always been. A space of contents. I don’t like things that are shouted». Ostentation is replaced by research. An aspect linking the past – always remembered and treasured – to the future, while continuously learning from the things she is developing. Coherence is what the founder describes as a funding value, both for those who feel it, as well as for those who receive it. «One must know which side to stand on. One must learn to choose».

Marìencò is open by reservation only. It provides guests with tailor-made proposals, including the menu and the set-up. The activity includes an association, Maè.